My partner and I traveled from London Heathrow to Beijing yesterday. Given the current #COVID19 situation, I thought that I would share my experience of what traveling to China is like at the moment (it might be a preview of what could come to Europe). 1/n

Heathrow airport was quite busy. We wore facemasks but there were many people without any protection. However, there were also a lot of people wearing gloves, goggles, and protective suits. The close we got our gate, the higher the ratio of people with protective clothes. 2/n 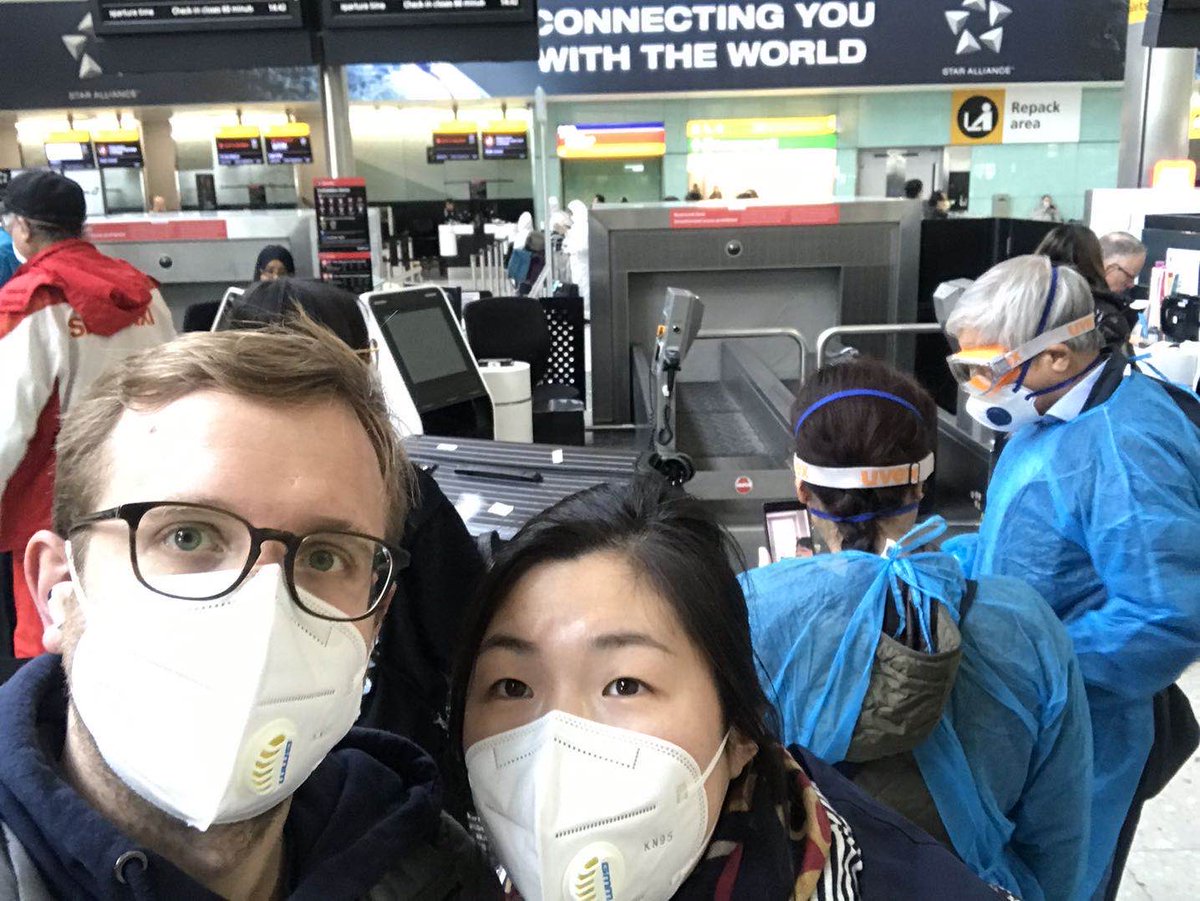 Aside: My perceptions of social norms in Europe is that wearing a mask is seen as overreacting. I am normally quite reluctant to do so, but the norms in China / among the Chinese are totally opposite. Not wearing protective gear will make you seem irresponsible. 3/

An interesting question is whether COVID-19 will change these norms in Europe and elsewhere. If mask-wearing is perceived positively, this could have positive side effects in countries with high levels of air pollution (eg India and Pakistan). 4/n

During our trip, temperature measurement was very frequent. On the way to plane our temperature was taken twice. It was taken twice more while in the air. Given the long incubation period, that seems only mildly effective, but it also didn’t use many resources. 5/n

On the plane, we were all instructed to wear masks and everyone stuck to it (that also means everyone was prepared as no-one handed out masks). Our neighbors were fully covered (see photo) and we felt somewhat under-protected (though probably more comfortable). 6/n 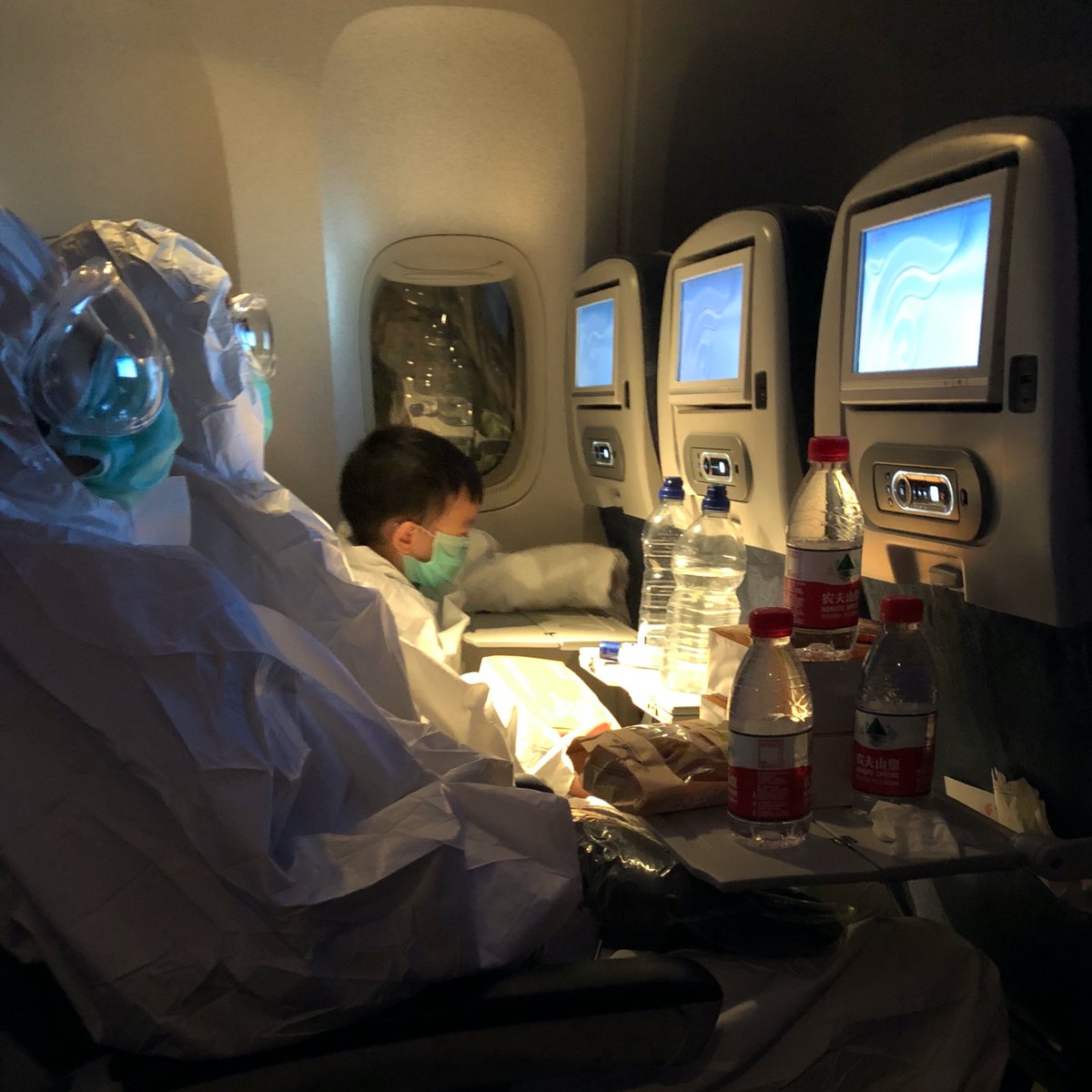 The flight attendants handed out a health questionnaire on the plane (instead of the usual landing card). However, when we landed, we had to fill out an updated version of the same document. This is just a sign of how quickly things are changing. 7/n

On the ground, we had to wait at least an hour before we were let off the plane. However, everyone (including the children) was very calm and the @airchina staff was very helpful and professional. Everyone was happy to be able to return home (I did not see other westerners). 8/n

The airport area for European arrivals was separated and all staff was wearing full-body protective clothes. We had our temperature checked again. Luggage was disinfected before being put out. Overall, we spent four hours on a process that usually takes less than an hour. 9/n

Everyone entering Beijing at the moment has to undergo a 14-day quarantine (not just social isolation). Hence, everyone was put on buses to a convention center close to the airport. In the center, the atmosphere was very calm, and most people seem to accept the policy. 10/n

There were the usual Chinese slogans but here they even had English translations. I think the did a decent job in terms of messaging and even actively fight discrimination and stigma. 11/n 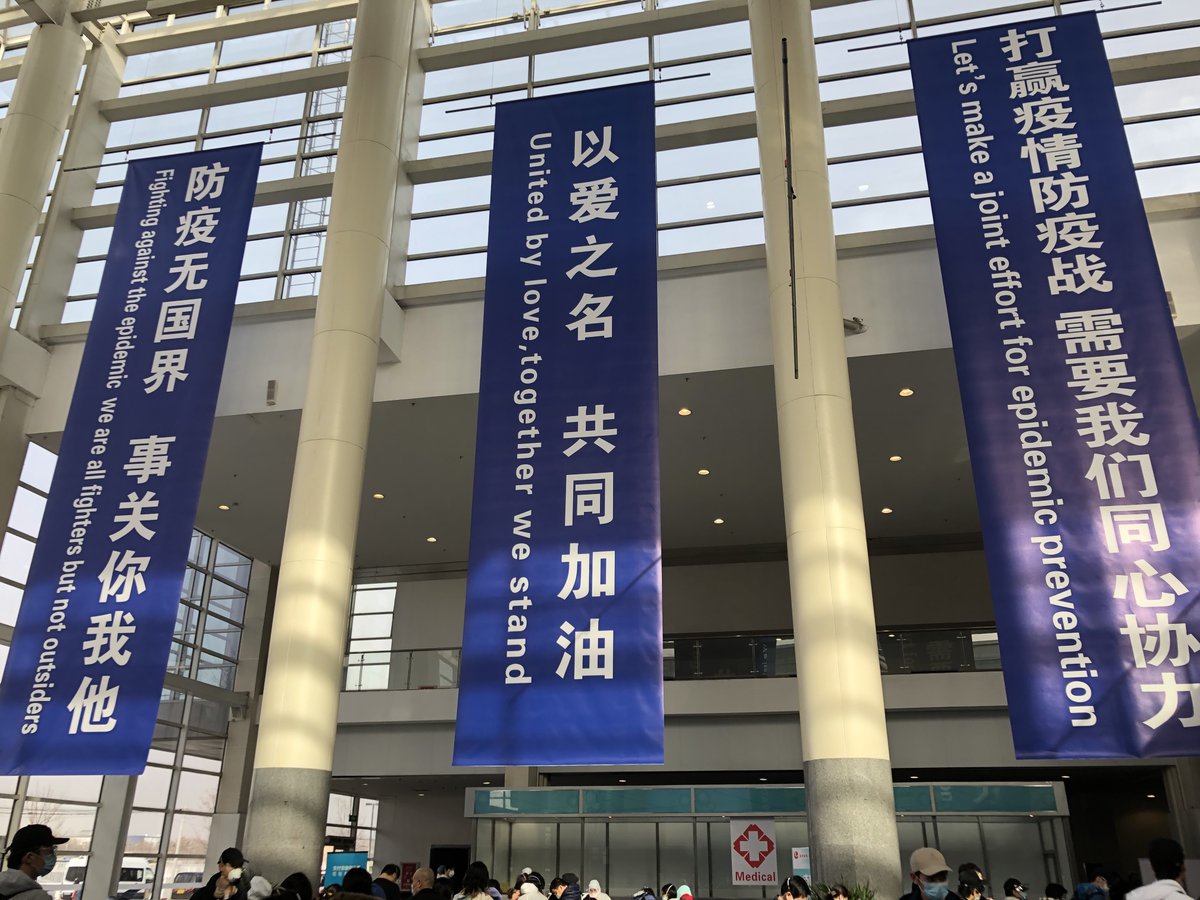 The quarantine is organized at the district level. Each district including ours (东城) had a few people working out the details of the quarantine for all arrivals. People living alone can spend the quarantine at home, but only if the local community leaders agree to it. 12/n 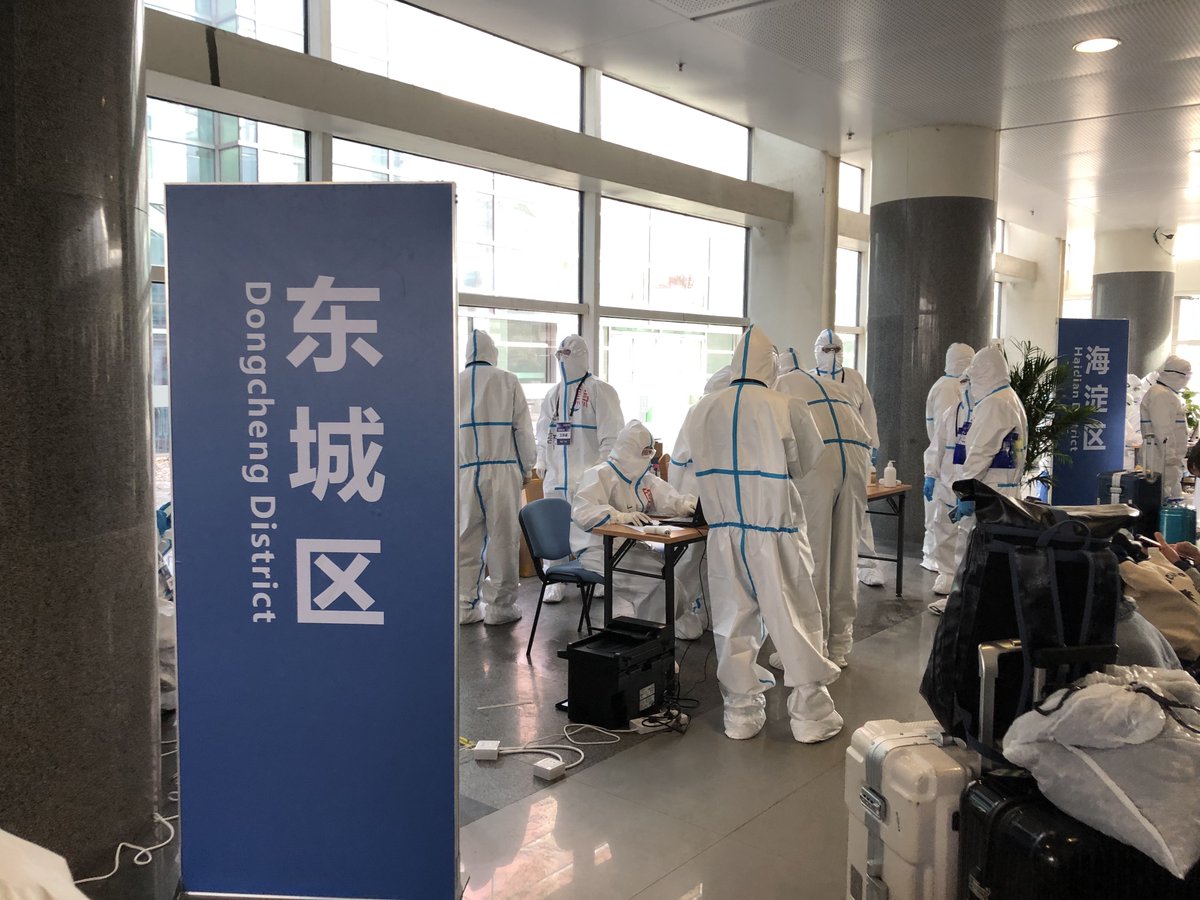 If the community doesn't have the capacity to support quarantine people or if the housing conditions don't allow it (eg central air conditioning) the quarantine has to be spent at central locations at your own cost. 13/n

We were lucky and after about an hour of waiting, our community agreed to host us and we could make our way home in a dedicated car. At the community entrance, we were welcomed by the community leader who made us sign a quarantine contract. 14/n

This contract is a pledge that we are not going to leave the house over the next 14 days. She also gave us plenty of information material about COVID-19 and then walked us home. Once at home, she put a seal on the door that would make it obvious if we left the house. 15/n 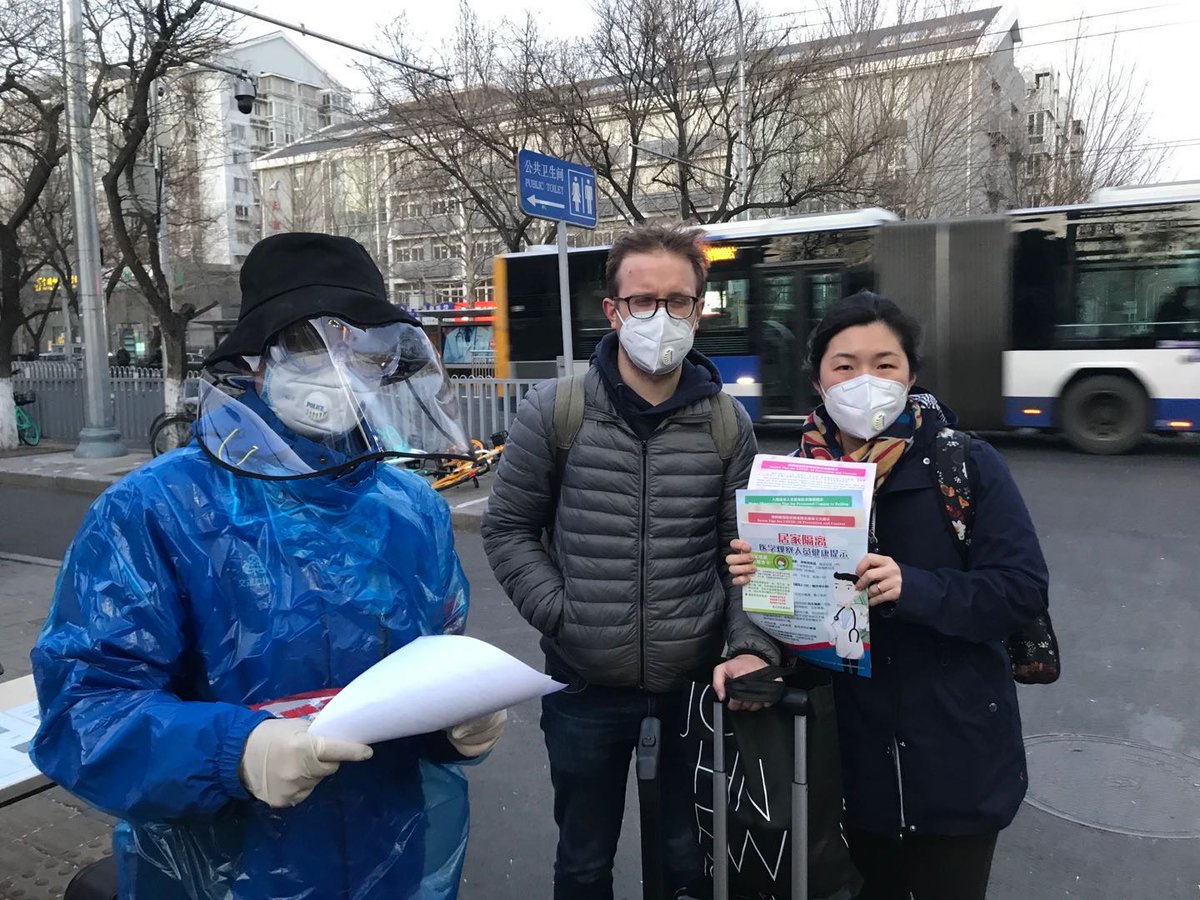 Generally, China is a great country to be quarantined. The community actively supports us. For example, the community leader offered to bring our online orders to our door as delivery drivers are not allowed to enter communities at the moment (and take our trash out). 16/n

This is still very effective and fast compared to Europe (it took us less than 90 minutes from ordering groceries until delivery yesterday). For now, we are happy to be home and thankful to everyone in China who made this process as pleasant as possible. 17/n

Everyone has been very nice and professional while strictly adhering to sensible policies. We will have to stay indoors for two weeks and twice daily report our temperature to the community leader. Later on, we just have to practice social distancing similar to the UK. N/n