Let’s talk about what happens if you get COVID19 and recover. Are you immune to the disease? How long does the immunity last? And what does that mean for your life and for the public health and economy of our society? 1/

Probably as many as 40% of humans will be exposed to COVID19 over the next 2-3 years, judging from past pandemics. Not everyone will actually get it. Only some (probably <1.0%) of those who get it will die. The rest will recover. And, almost all of them will be immune. 2/

But we don’t know how long this immunity lasts. For some diseases (like polio or chickenpox), you are basically immune for the rest of your life. But for many others, that’s not the case. This is a complicated area in immunology. 3/

To sort this out, we need different kind of test than what many are discussing. Most ppl are discussing rRT-PCR assays that detect whether patients actually have coronavirus RNA. But that only works for people who are *currently* infected since it’s detecting SARS-CoV-2 itself 4/

Chinese scientists created tests for SARS-CoV-2 itself by early January:  https://www.sciencemag.org/news/2020/02/labs-scramble-spot-hidden-coronavirus-infections …. FWIW, this article notes the USA’s lag in testing even back then. (Incidentally, I envy protective equipment the Chinese scientists have in photo, but that’s for another thread.) 5/

If you have had COVID19 and no longer have symptoms, the existing test for viral RNA will tell you nothing. We need a different kind of test, called a “serological" test, that measures the *antibodies* that your own body makes against the virus. 6/

When humans get an infection, such as with SARS-Cov-2, we make antibodies to the components of the invader, especially against proteins on the viral surface. These antibodies can neutralize the virus and also protect us from getting infected again. 7/

The “serological” tests that we need for the virus detect human antibodies to such viral antigens. That is, they are a test of our response to the virus rather than of the presence of the virus. Scientists have perfected such tests for decades (eg,  https://academic.oup.com/aje/article/91/6/585/213597 …). 9/ 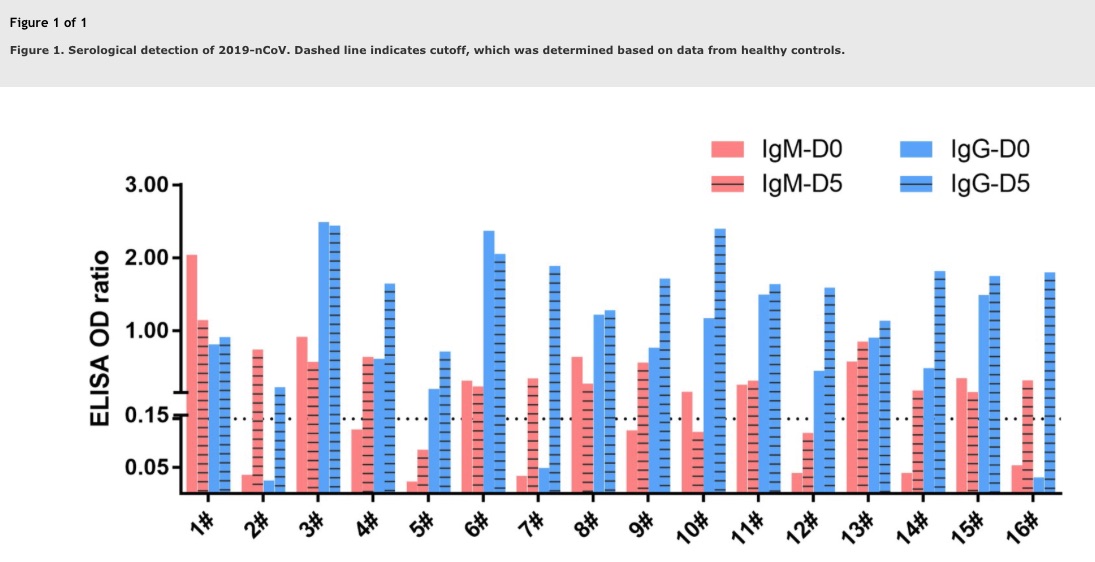 Scientists in Singapore followed suit with an antibody test, also in February.  https://www.sciencemag.org/news/2020/02/singapore-claims-first-use-antibody-test-track-coronavirus-infections … Many groups are racing to create such tests, which will have great commercial and clinical value. Our antibodies to the virus can be measured from ‘none’ to high levels. 11/

Incidentally, the way we will make a vaccine is to artificially stimulate our immunity by giving just (noninfectious!) parts of the virus to people, so that they create antibodies and then fight off any real infection, if later exposed. A vaccine is a simulated infection. 12/

We are lucky that SARS-CoV-2 is very “immunogenic,” which means that our immune system finds the virus very irritating and can mount a vigorous immune response against it. Damn virus. 13/

Developing serological tests should actually be a national and international priority. For many reasons. 14/

USA has opportunity to avoid mistakes with lack of RNA tests for acute phase of COVID19. We can make rapid progress and put into place distribution and insurance coverage. Test should be free (we need legislation), since we all benefit from immunity & knowing who is immune. 15/

There is a lot of research on such tests at present. Dr. Krammer explains a new paper from his group  https://www.medrxiv.org/content/10.1101/2020.03.17.20037713v1 … in this technical thread here: via @florian_krammer @VivianaSimonLab @Olli_Vapalahti @hepojoki @kedzierskalab et al 16/

The analyses by @florian_krammer et al also show something else: it looks like humans have, as we have been expecting, not encountered this virus before. We are all "immunologically naive.” We have no natural immunity. :-( 18/

This helps explain why the virus has spread so quickly and has become pandemic. There are few (if any) natural breakwaters in our species. 19/

We know from prior research that antibodies against viral antigens render us immune, but we do not yet know how long the immunity will last (to learn this will require follow-up time, and we are still only at the outset of the epidemic). 20/

Hence, the duration of immunity to a new coronavirus like SARS-CoV-2 is very difficult to know. We will just have to ‘wait and see' -- which is an expression that I find myself using so often with COVID19 and that is so frustrating for all of us. 21/

But we already can know, and do know, the *early* time course of immunity for COVID19, over the first 40 days since onset of illness.  https://papers.ssrn.com/sol3/papers.cfm?abstract_id=3546052 … via @TheLancet 22/ 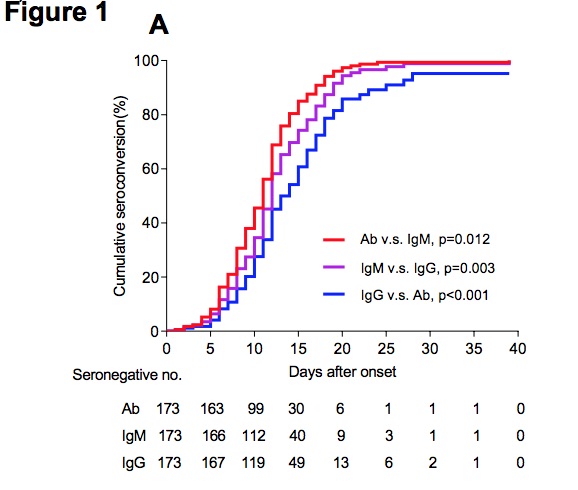 We can, however, look at other coronaviruses and see what we can learn about the possible duration of immunity for COVID19, once we are further into the epidemic and have longer follow-up. We can guess based on past science. 24/

Here is a classic 1990 study of 15 volunteers who were *deliberately* infected with a *different* coronavirus squirted into their nose, with immunity monitored for a year. Immunity reached a maximum at 2 weeks. It had lapsed by a year later.  https://www.ncbi.nlm.nih.gov/pmc/articles/PMC2271881/pdf/epidinfect00023-0213.pdf … .... 25/ 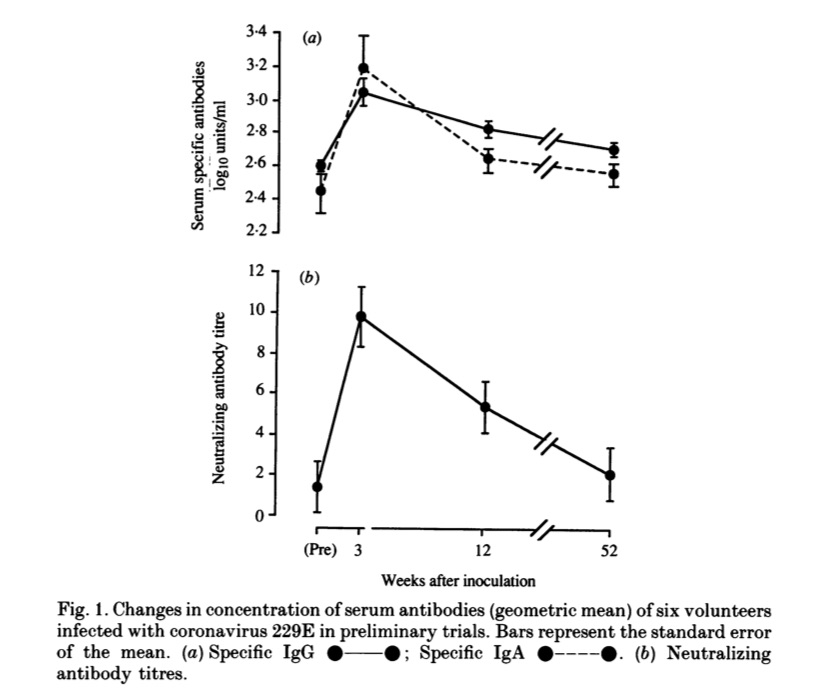 Amazingly, 9 volunteers returned to lab to be ‘re-challenged’ by having virus squirted into their nose a second time! Although their antibody titers had declined, they still had some immunity, since only 6 of 9 became re-infected and none developed symptoms. So, that’s great! 26/

Alas, as an aside, the decline in titers also means that developing a vaccine for COVID19 may be very challenging, similar to the reasons we do not yet have a vaccine for the common cold (but that is the topic for another thread). 27/

Serological tests are important even in acute phase of COVID19 because tests for virus itself could be falsely negative (for many clinical & technical reasons, eg poor technique swabbing throat). Detecting antibodies to the virus offers us another way to spot the little devil 28/

As the epidemic proceeds, we will want to do serological tests (by drawing blood) on as many people as possible to identify people who have recovered and are highly likely to be immune. This should be a national priority. 29/

People who are known to be immune based on such serological tests for SARS-CoV-2 are no longer infectious (they basically cannot spread the virus), and they can return to work, school, etc. This is going to be especially valuable for health care workers. 30/

But here’s the thing: once you’re immune to COVID19, you can go about your business. Immune people can move about & help restore our economy. As number of such people rises, it will also confer "herd immunity" to our population, by blocking viral transmission, helping us all! 31/

Incidentally, if a person in a household is known to have had COVID based on the extant RNA test and is now recovered, they are a good choice of person to send out for errands, since they are also now immune. 32/

Serological tests are also important because they help determine true denominator of people who got infected & recovered without symptoms or minimal symptoms, which is crucial for computing COVID19 IFR (infection fatality ratio), as @mlipsitch notes:  https://www.washingtonpost.com/opinions/2020/03/06/why-its-so-hard-pin-down-risk-dying-coronavirus/ … 33/

When we have widespread serological testing of a representative sample of people, we will be able to compute numbers of people already exposed (and naturally immunized — ie, without a vaccine) to SARS-COV-2. We might find that the IFR is much lower than we have been fearing. 34/

Eventually, we could also even extract antibodies from humans who are immune (this is called ‘serum’ — and it’s like making a blood donation) and use it as a treatment for seriously ill people with COVID19 (this treatment can cause other problems, but that’s another story). 35/

A nice review of the biology of many possible strategies to treat COVID19, including ‘passive antibody transfer’ from one patient to another, using serum, is here:  https://www.ncbi.nlm.nih.gov/pmc/articles/PMC7029759/pdf/f1000research-9-24634.pdf … 36/ 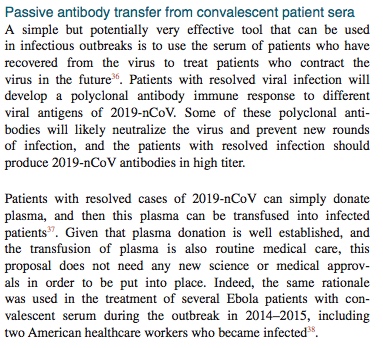 In this terrific thread by @PeterKolchinsky, also sent out March 19 by coincidence, you'll find an explanation of the likely feasibility of making a COVID19 vaccine. We already have vaccines for dog & cow coronaviruses, for example. Chances look good. 38/

New dystopian thought: a market will emerge over near term whereby employers will be willing to pay more to (and compete for) workers with serologically documented COVID19 immunity. This is a scary thought in very particular ethical ways that I’ll need to think more about. 39/

Here is how serological testing for COVID19, coupled with the somewhat creepy notion of “immunity certificates,” could actually help our economy get back on track. 40/

This thread nicely illustrates some difficulties w applying serological tests (or any tests) to large & low prevalence population. Even if test is very good, if disease is uncommon, false positives will overwhelm true positives. “PVP” will be low. /41