The STOCK Act passed in 2012 with strong bipartisan support after 60 Minutes uncovered that lawmakers were using official information to profit in the markets. It was amended a year later to weaken those restrictions.

Burr voted AGAINST the STOCK Act. The final vote was 96-3.

You can read the transcript of that 60 Minutes investigation here.
https://www.cbsnews.com/news/congress-trading-stock-on-inside-information/ …

The STOCK Act prohibits members of Congress from trading on information they acquire through their official duties as lawmakers, something that had previously been legal and accepted.

Even though the bill was weakened, insider trading is still illegal.
https://www.npr.org/sections/itsallpolitics/2013/04/16/177496734/how-congress-quietly-overhauled-its-insider-trading-law …

You can read the full tweet-thread from Senator Burr here. He doesn't explain the financial moves he made February 13, offloading hotel shares before those stocks plummeted.

A spokesperson for Burr has addressed his stock sale in @politico per @kyledcheney and @caitlinoprysko:

The aide explains the moves were "personal transactions made several weeks before the U.S. and financial markets showed signs of volatility" 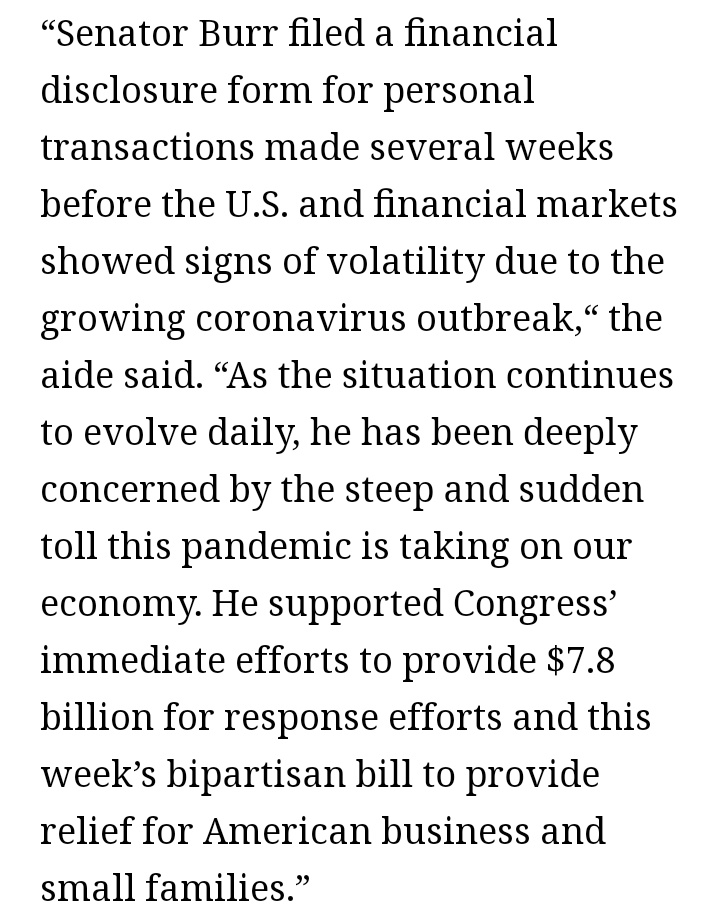 As I state in my own reporting for @cheddar on the stock sales:

Another lawmaker who may need a refresher on the STOCK Act is Sen. Kelly Loeffler.

Loeffler has responded on Twitter, calling the examination of her financial disclosure "a ridiculous and baseless attack."

Loeffler is up for election in 2020 - the first time she'll be tested by Georgia voters. She was appointed to her Senate seat.

Burr has released a statement saying he sold his positions due to news reports and nothing else.