I interviewed the modeler who forecasts just ~81K deaths in US through August from COVID-19 if current, radical social distancing measures remain in place through end of May

Here’s what he said, and what I learned

As background, the modeler, Christopher Murray, heads the 500-person Institute for Health Metrics and Evaluation at the University of Wash., one of the largest disease modeling teams in the world

You might not like or agree with his methods, or findings, but the Institute is hardly some fly-by-night operation

It has better hospital data than most state governments, which is why so many of them rely on the Institute to forecast how many ventilators they’ll need.

I asked Murray if his 81K deaths est. was good news

“If you’re coming from the study that found 2M would die, it’s good news” But “the assumption is we will keep in place soc distancing, including school closures, non-essential business closures, & stay-at-home until end of May”

BTW, Murray’s forecast of deaths peaking in mid-April is similar to one by a modeler for the Centers for Disease Control, Ira Longini, professor at the Center for Statistics and Quantitative Infectious Diseases at the University of Florida.

As such, it is not an outlier

In fact, its conclusions aren’t very different from what Imperial researchers conclude will occur if we maintain radical social distancing measures

The U of Wash model is real-time. Murray says he updates his model every day. “We were talking with one of a governor’s groups in a state last night where they had a big bump in deaths,” said Murray, “more than expected. And so we want our forecasts to reflect the new trends.”

Imperial’s model is “like measuring the impact of a fire on a town if nobody changed their behavior—everybody would be burned in their homes—as opposed to how many would die if everyone runs away when the fire is coming. Some will still die but most people change their behavior.”

Our model is meant to be real-time,” Murray said. “We fit a statistical curve to the available data and to the variables that explain the curve, and the key variable is social distancing.”

I asked Murray if one model was better than the other.

“Both are legitimate,” Murray said. “The first model is a great call to action and super useful. But if you’re trying to help the hospital and fire-fighting service, you need our model.”

But hadn’t the Imperial model been too apocalyptic and alarmist? “There’s a value to apocalyptic alarmism because as we saw some places were slow to do anything,” Murray said.

“And there are still some countries that are slow to do much,” he explained. “I’ve been on the phone with political leaders in Europe who still don’t have stay at home orders because they are worried about the economic effects.”

“We estimate a peak of deaths right around Easter. After that, governors will be reluctant to have the risk of a resurgence.”

It’s hard to feel heroic staying in our homes, but if the science is right, we will have helped save the lives of 2 million fellow Americans. 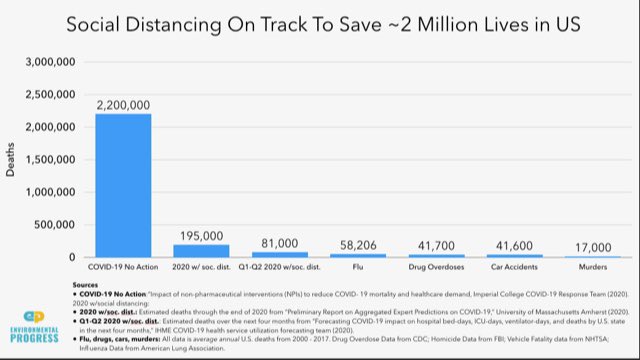 University of Washington researchers forecast 6,100 total California coronavirus deaths by end of July with peak on April 24, as long as social distancing measures stay in place