Robert Hyde, the impeachment figure facing several unrelated criminal charges, claims to have access to 10-20 million N95+KN95 masks. He has hawked them on Twitter for three days.

He recently posted this photo he ID-ed as MyPillow’s CEO. 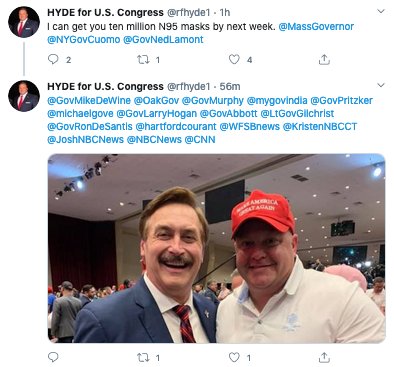 Hyde did not respond to a text requesting information about how a landscaper would allegedly come across tens of millions of such masks during a national shortage.

He has posted an image depicting boxes of KN95s, the Chinese alternative.

Since these offers come at the time of a national shortage, I asked federal and state authorities for information or comment. None so far.

Since making national headlines with the impeachment scandal, Hyde has been running for Congress over the Connecticut GOP's objections and facing several criminal charges for violating a protective order finding that he stalked a lobbyist.

If you look closely to a tweet at the top of the thread, Hyde tagged multiple state governors and national news outlets about his claim. Another reporter who received an unsolicited email is @C_Sommerfeldt.

MyPillow did not respond to either of my email inquiries, including one asking for information about this photo and Mr. Lindell's alleged connection for Mr. Hyde.

Note on Hyde, Covid-19 and his social media:

In March, Hyde posted an alleged exchange w/ an FBI agent about an SDNY grand jury probe. In it, Hyde claimed to be sick amid coronavirus fears, and warned of the cost of perjury, he got a delay until April.  https://ctmirror.org/2020/03/13/hyde-says-he-cant-appear-before-grand-jury-because-he-may-have-covid-19/ …

This almost goes without saying, but to echo @C_Sommerfeldt’s disclaimer: Take the claims with an enormous grain of salt, except to note Hyde is making these claims in this time and context.