If you are wondering whether Senator Richard Burr is also on the task force, the answer is yes. 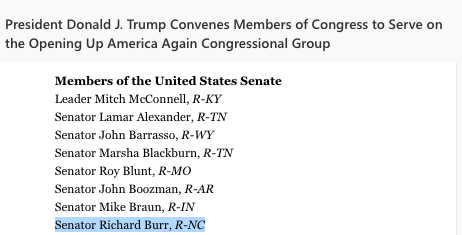 There are some 65 U.S. senators on this task force, per a new White House announcement.

The U.S. Senators on the task force by the numbers:

Only 12 of the task force members are Democrats.
One is an independent (Angus King)
The other 52 are GOP.

Trump's task force adopted a similar approach to bipartisanship in the House of Representatives: