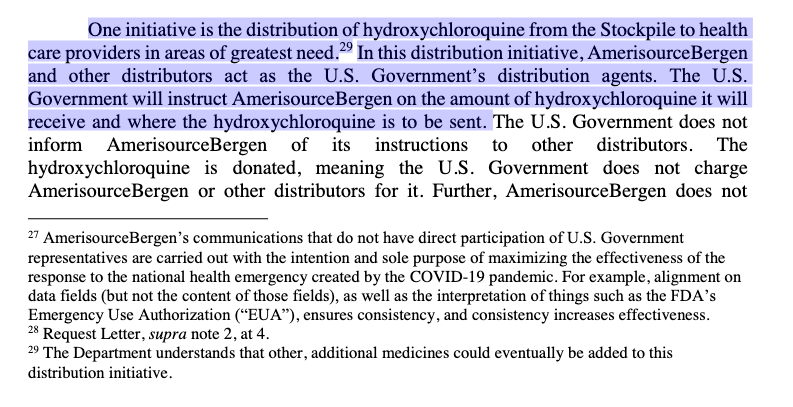 AmerisourceBergen is one of the companies sued by West Virginia in 2017 for exacerbating the opioid crisis.

Two others were McKesson and Cardinal Health.

The DOJ cleared antitrust hurdles for them earlier this month.

Note: There is no FDA-approved treatment for Covid-19.

The French paper that Trump cited in touting the drug's promise was repudiated by its publisher.

Another French study found it didn't help and had to be discontinued because of heart toxicities.  https://www.cnn.com/2020/04/15/health/new-french-study-hydroxychloroquine/index.html …

The $750,000 contract to develop a treatment protocol for the anti-malaria drug ends tomorrow (April 21).

Some two decades ago, the contractor behind this work oversaw a defrauded clinical trial for an antibiotic that sparked a rare criminal prosecution.  https://www.courthousenews.com/chloroquine-researcher-oversaw-trials-for-drug-that-sparked-rare-prosecution/ …

Seeking antitrust experts for a story on this breaking news.

Is that your expertise?

DMs open. Email in bio, and message me for secure contact info.

Story on the antitrust clearance for this drug-wholesale giant supplying the hydroxychloroquine coming up soon for @CourthouseNews.

Meanwhile, a few more facts to contextualize this breaking news.

The DOJ has issued business review letters for six medical companies so far for Covid-19 supplies.

Critics saw it as the Trump admin's attempt to punish subsidiary CNN.

In the ensuing press coverage, NYT reported that the deal put "Trump's top antitrust cop" Delrahim at the center of a political storm.

They reported in the article on Delrahim's gift upon entering DOJ: a hat punning “Makan Antitrust Great Again.”  https://www.nytimes.com/2017/11/09/technology/justice-department-antitrust.html …

In an interview, @DrDenaGrayson told me the government sometimes stockpiles drugs during emergency situations before their efficacy against a disease can be proven, but the singular focus on hydroxychloroquine seems political.

Hydroxychloroquine is the only drug listed by name in the DOJ's letter to AmerisourceBergen.

"The Department understands that other, additional medicines could eventually be added to this distribution initiative," a footnote of the letter reads.  https://www.justice.gov/atr/page/file/1269911/download …

AmerisourceBergen did not immediately respond to an email requesting comment, and I will have more context from an antitrust expert soon.

Look out for the story.