So, would Sunday be a good day for another attempt to explain the fragility of the global #economy?

So, here goes. A thread explaining, why our economies are so fragile and what should be done.

A natural starting point is this. 👇 1/

I consider the above to be the most important figure of the 2010s, in addition to the global CB balance sheet.

What the figure implies is that the global productivity growth stagnated in 2012.

This is something that should not happen outside economic crises, so what gives? 2/

Long-term economic growth is driven by technical innovations, like the spinning-jenny, which improve the productivity, that is, the efficiency of production.

Effectively, they increase the productivity of a human worker, which increases his wage and makes products cheaper. 3/

A process called creative destruction enables the flow of technological innovations into the production.

Simplified, it describes a process, where more efficient (more productive) methods will replace the old and inefficient means of production. This naturally occurs... 4/

... both within firms, and in the economy in general.

... by enabling technological innovations to flow into production.

Another way to describe creative destruction is to note that both gains, i.e., successes and profits, as well as failures and/or bankruptcies of businesses drive economic progress and development. 6/

providing infrastructure, governing human and property rights and guaranteeing income through social security, but it is the private sector, households, investors, corporations, entrepreneurs and the capital markets that drives process of creative destruction. 8/

As the recurrent failures of socialist market economy experiments show, this risk-and-reward relationship is essential for this creative destruction and thus the economy to provide long-term gains in living standards and social stability.

....political leaders and central bankers have removed or at least seriously distorted risk-and-reward relationships with their bailouts and monetary easing all around the globe since 2008.

Market-wide losses and risks have been socialized, but rewards and profits,... 10/

remained private. China's policies were the pinnacle of this.

When China enacted its massively stimulus programs in 2009, it practically ordered banks to lend.

But, asserting centralized control over bank lending means that a growing share of such loans will go to... 11/ 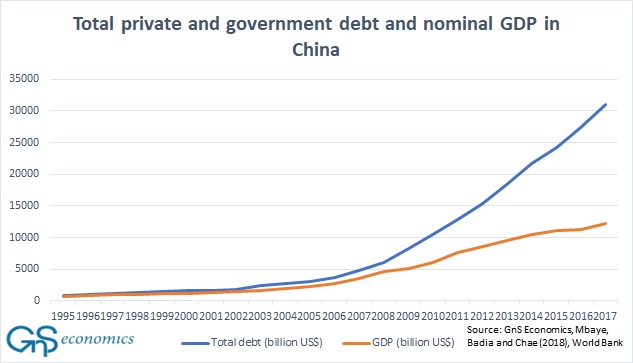 This became visible in 2012, when the Total Factor Productivity (TFP) of China started to fall.

Not many understood this at the time, but 2012 marked the end of the 'Chinese Miracle'. /12

I've heard some strange explanations on the stagnation of the TFP over the years, but it's not wages (productivity growth drives them, not the other way around) nor the 'commodity cycle' (TFP and commodity prices fall, when economy falters). 13/

The unfortunate fact is that central banks and massive debt stimulus of #China post-GFC broke the model of economic growth that has driven the relentless increase in our living standards for the past 200+ years!

Now, this is something #MMT:ers and their ilk, should consider. 14/

This something everyone should understand, when were are heading to probably the worst economic crisis humanity has ever faced. 15/

Yes, you may be able to save us from economic depression by CB financed gov spending, but the price will be "ever-lasting" economic stagnation.

As a trained growth economist, I'll take the depression, over prolonged stagnation, every day of the week and twice on Sunday. 16/

And I dare, do not say "Japan", because we, the world, have been carrying their sorry economic *ss for the past two decades! 17/
https://gnseconomics.com/2019/03/18/the-world-economy-the-way-of-japan/ …

World #economy has only one hope: a return to the principles of the market economy.

This means dismantling the central banks and returning to the true Keynesian policies, where governments only provide support for the #economy in recessions, if even then.