1/Well, here's a depressing thread that I've known that I was probably going to have to write since sometime in 2016 or so. I was waiting to see how things shook out, but now there's little doubt:

The pro-immigration cause in America is -- for now, at least -- a lost cause.

2/This might seem surprising, because most Americans are pro-immigration.

Previous waves of nativism, in the 1990s and 2000s, had much broader support, and yet in those eras nativism was defeated with only a few concessions.

Why should this time be different?

First, broad opinion polls don't say much about *salience*. If 70% of the population feels warmly about immigrants, and 30% is willing to destroy the country to stop immigration, the 30% will win because they care a lot more.

4/When 30% of a country decides that immigration is a mortal threat, it almost doesn't matter what the 70% majority thinks. The 30% will spend all their political capital on this one issue, and even destroy critical institutions to get their way on this one issue.

5/Also, suppose you're an immigrant deciding whether to move to America. Who wants to move to a country where 30% of the people hate your guts? Even without Trump, the knowledge that immigrating to America means jumping into the middle of a culture war is a strong deterrent!!

6/In fact, though, the immigration "pause" in which we now find ourselves was long in coming.

The first thing that happened was that the Mexican immigration wave, which was by far the biggest wave, ended when Mexican fertility fell and the economy improved. 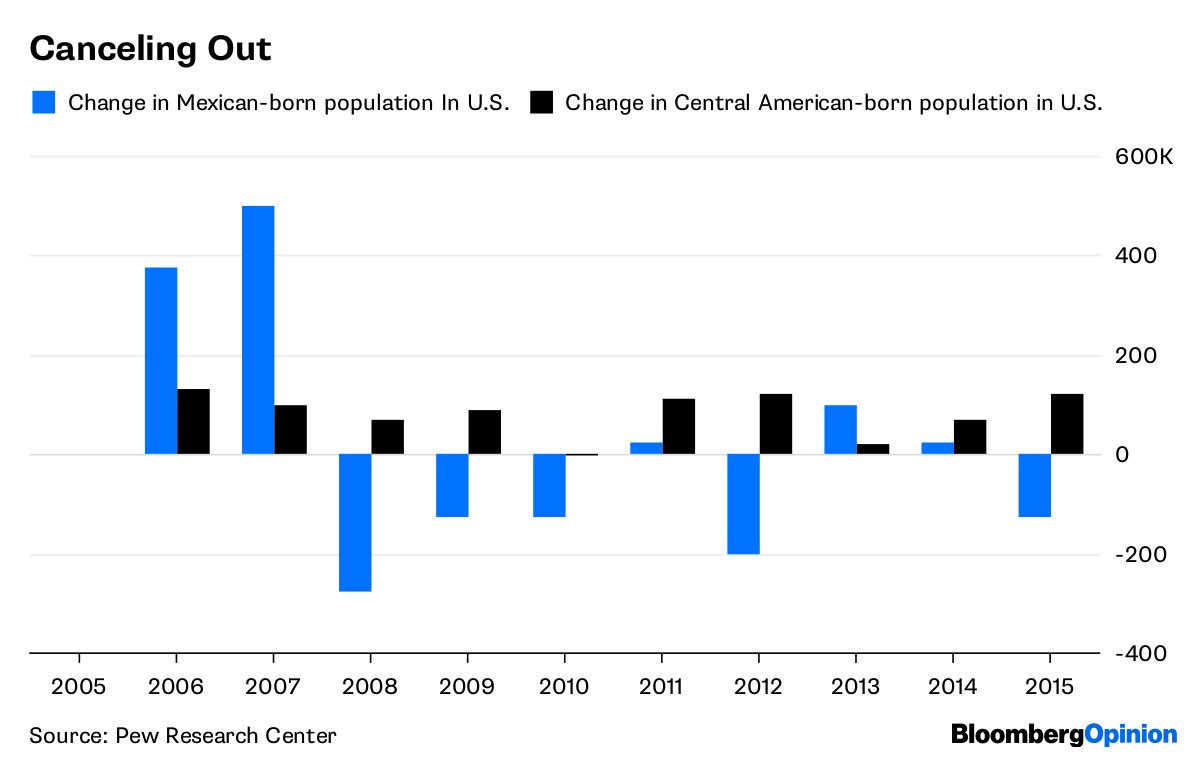 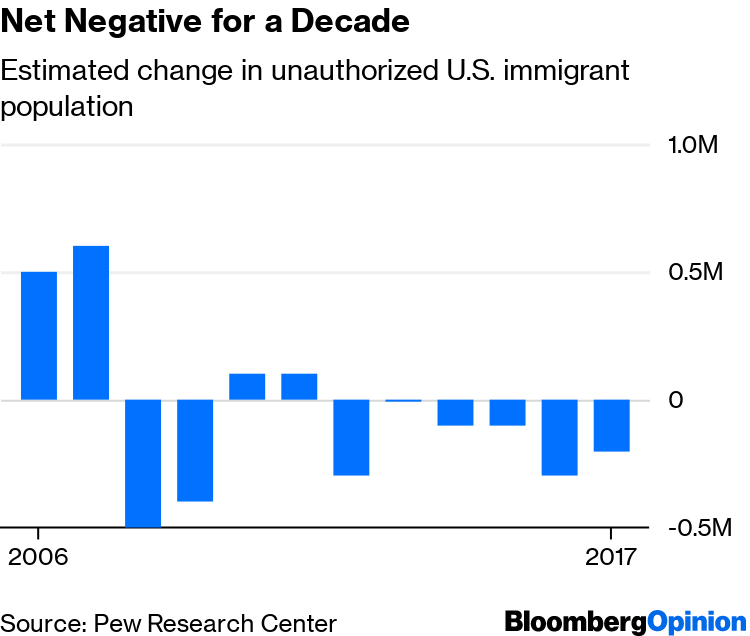 7/After the end of the big Mexican wave, immigration proceeded at a more modest pace, increasingly driven by educated immigrants from Asia.

8/Even that wave probably would have attenuated on its own, as job opportunities improved by leaps and bounds in China, leaving India and possibly Southeast Asia as the main sources for skilled Asian immigration.

But that never got the chance to happen, because Trump came.

9/Trump marked a shift in nativist policy. Despite high-profile ICE raids and such, a main target of actual executive branch policymaking was now making it harder for educated immigrants to get in.

10/This was effective in part because when it comes to fighting for H-1b workers, employment-based green cards, etc., even liberals' passion tends to cool. So people looked the other way as Trump harassed the skilled immigrants who were now our biggest source of immigration.

11/Sentiment on the far right, too, increasingly turned against educated immigrants as the Mexican wave dried up.

Incidents like the Olathe shooting must surely have terrified potential immigrants in South Asia, for example.

12/It was likely thanks to this combination of administration harassment, Trumpian rhetoric, far-right aggression, and the fear of being a pawn in America's latest culture wars that caused legal immigration to drop massively around 2019.

13/That was all BEFORE coronavirus. Now, even if Trump's suspension of permanent residency is struck down by the courts or expires quickly, travel restrictions will persist for a long time, and hesitancy to make international moves will likely persist even longer.

14/And of course there will be the economic devastation from the epidemic, which I believe will last years.

The last big downturn tipped the Mexican wave into permanent reverse. This one could easily do the same for the Asian wave.

15/The point is not that pro-immigration forces lost intellectually or in the court of American public opinion.

That just wasn't nearly enough to keep immigration going, because of Trump, and because America is not an attractive place to move now.

16/And in a larger sense, immigration waves tend to end. The Mexican and Asian waves of the last few decades were never going to last forever.

17/I had been planning to write a book about why immigration is good and necessary. A number of other people are writing similar books. They're all correct, of course. Immigrants are very important for the health of our economy and for our nation's power.
https://www.amazon.com/One-Billion-Americans-Thinking-Bigger/dp/B086Q3FHDJ/ref=tmm_aud_swatch_0?_encoding=UTF8&qid=1587972787&sr=8-2 … 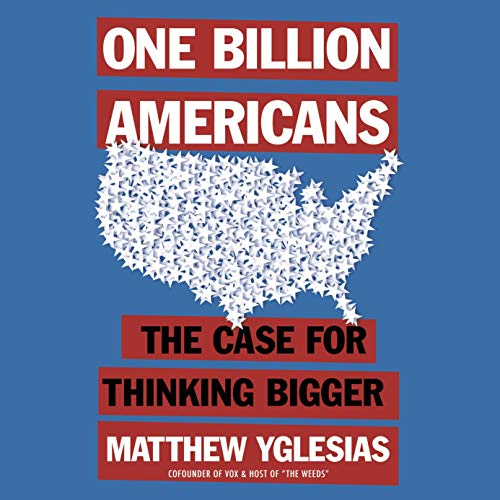 18/But those arguments won't matter for a long time. We're in the Immigration Pause world now.

Someday, when our country regains its confidence, we will reopen to immigration, and these arguments will be dusted off and used. But not for a while (even if Biden wins).

19/We pro-immigration people lost, thanks to external events, the rabid insane commitment of the anti-immigration forces, and the natural ending of the immigration wave.

Now the battle over the future of America will shift to a new phase: consolidation and nation-building.

20/Even with immigration halted, the descendants of recent immigrants are still here in great numbers. They are natural-born American citizens. Their presence here has made the U.S. a very diverse country. That fact is not going to change.

21/The battle now will be over whether and how those descendants of recent immigrants will be incorporated into America's national self-definition.

As Gary Gerstle writes, racial issues are always front and center in this sort of question.

22/Some rightists will try to exclude nonwhite Americans from the national self-definition, relegating them to subordinate second-class status in a country where "American" implicitly means "white".

23/I predict that many conservatives, seeing the electoral folly of such a strategy, will instead make Republican Party voting and conservative ideology central to their definition of "real Americans".

24/On the left, I see the socialist movement as an attempt to build a multiracial coalition. Though socialists are generally more internationalist than nationalist, this is still overall an assimilation strategy -- being on the left means being in the club.

25/I predict that some "woke" folks will continue the attempt to denounce and delegitimize the American nation itself, but I predict that in the age of coronavirus and other external threats, this will be even *less* popular than it proved to be in the Democratic primary.

26/We wise center-left liberals, of course, know exactly what needs to happen (hehe).

The American nation must endure, but must expand its self-concept to be a nation of all races, defined by civic rather than racial nationalism.

27/For this nation to survive and thrive, the children and grandchildren of the recent immigrant waves -- mostly Latin American and Asian, but also some Middle Eastern and African -- must be made to feel like core Americans. Unshakable members of the American polity.

28/That will require some creative rewriting of the national story. It may require cooperation against common threats (as in the 1860s and the 1930s-40s). It will certainly require some strong leadership. And it will be a very long, contentious process, as it always was before.

29/If we fail in this task -- if the American descendants of immigrants from Mexico, China, etc. are made to feel excluded and un-American on an ongoing basis -- then this nation will either collapse or limp on as a pale shadow of what it once was.

30/The fight to sustain America's 3rd great immigration wave is now over.

Now comes the fight to fully embrace and incorporate the descendants of that wave as core, unshakable members of the American nation.

That, I think, is a fight we can and must win.