2) Market has been rallying on new cases declining, massive stimulus, cleaner positioning and the fact that large parts of the economy will begin reopening - rightly or wrongly - by Memorial Day along with the reality that many of the largest index components benefit from Covid.

Even after 20 years, I am surprised by just how anticipatory the market is. I thought I was weeks early writing this vs. only days early.

4) However, sell the news is also a real phenomenon. And I am fascinated to see how the market trades as the economy reopens.

Especially given the fact that the economy reopening is unlikely to lead to a quick return to normalcy based on international analogs.

5) i.e. In Sweden, the economy never closed but movie theaters, restaurants and hotels are mostly empty.

In China, the consumer is still quite weak - especially in larger cities - well after new cases and deaths have asymptoted to near zero. 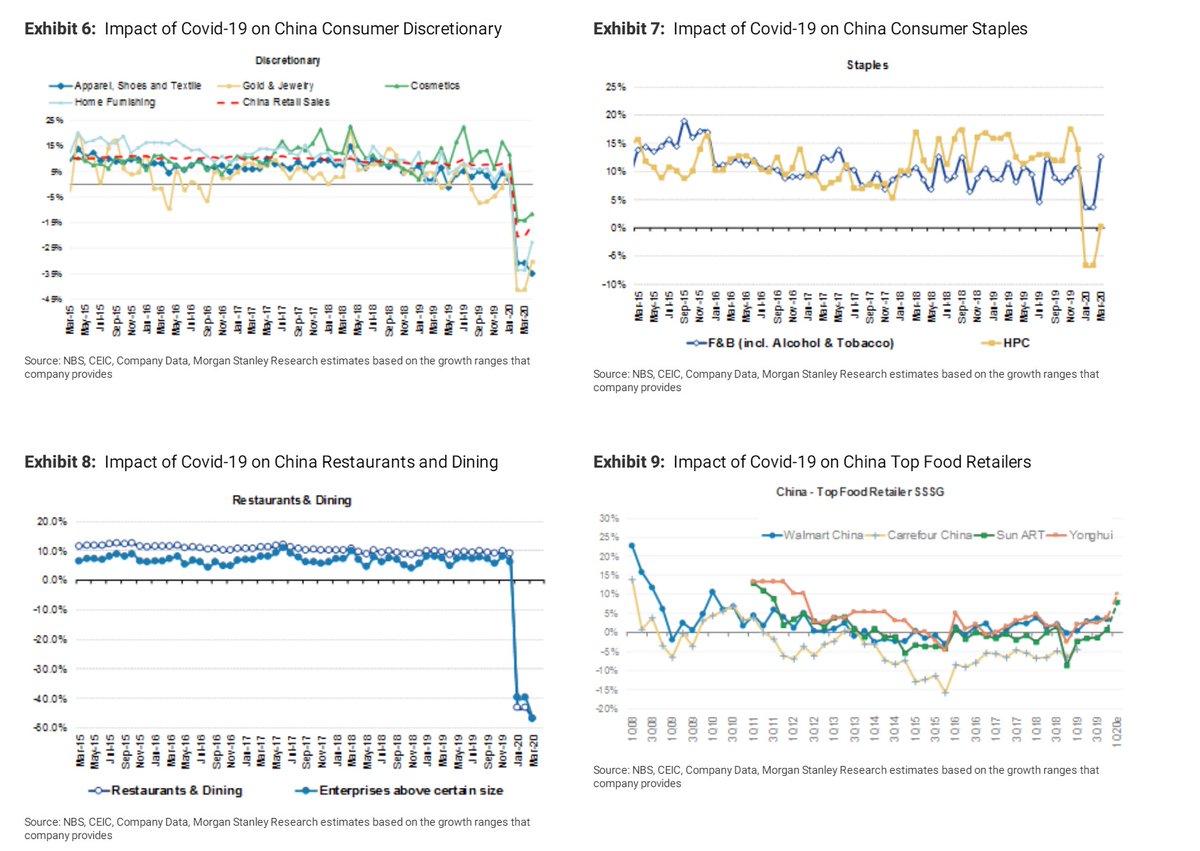 6) That's not to say that China isn't recovering - only that it hasn't fully recovered and the recovery has been very uneven.

Traffic, auto sales and housing have largely recovered, but hotel occupancy is still deeply depressed and ride sharing is still down 25% (no chart). 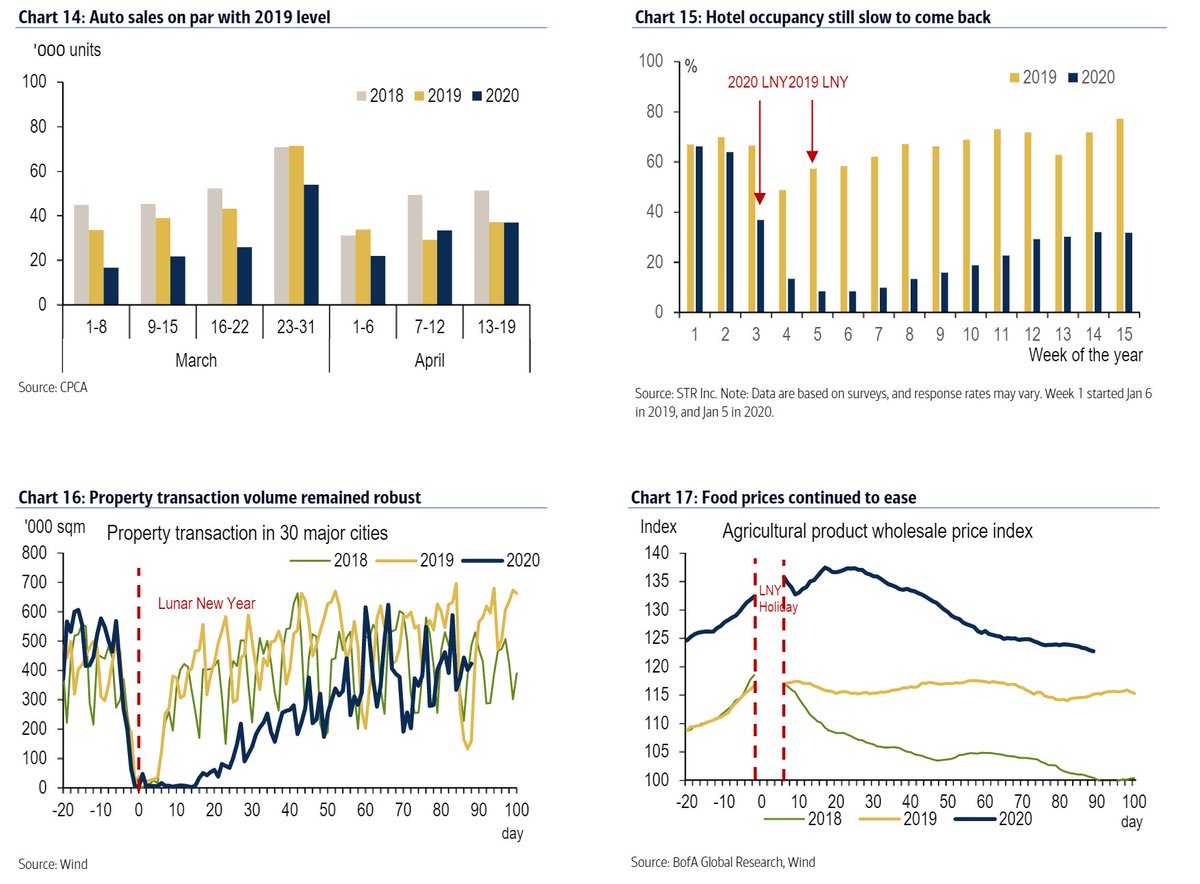 7) Bloomberg had a good article on Wuhan after the lockdown was lifted. Reopening does not equal normalization.

8) Barron's also. All of these international examples suggest that the economy will not quickly normalize as it reopens.

9) And consumer surveys bear this out with 36% of Americans in this survey saying they will avoid going to restaurants/bars altogether even when things fully reopen and 58% saying it will be 3 months post all-clear before they feel 100% safe traveling: 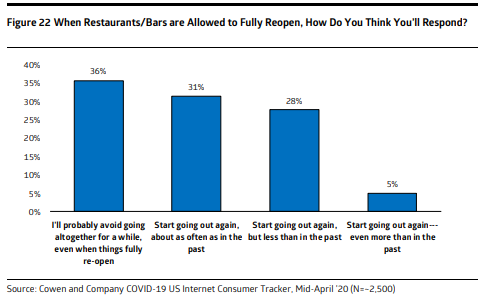 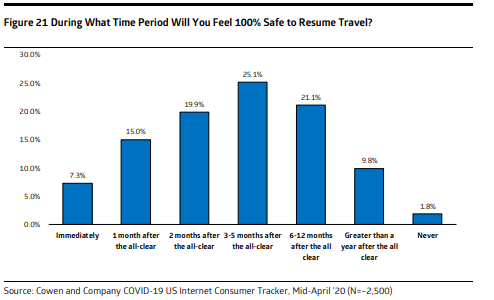 10) Economic "normalization" as opposed to reopening likely requires that the fear associated with Covid declines significantly.

11) I see 3 possible ways for the fear of Covid to be reduced: a vaccine in 9-36 months, better treatment regimens later this year that reduce the CFR or widespread Serological testing which reveals that the CFR is lower than we thought.

12) Of these, I think better treatment regimens are the most likely near term way forward for the simple reason that the global medical/scientific community has never before focused so intensely on one problem per Mary Meeker's excellent chart: 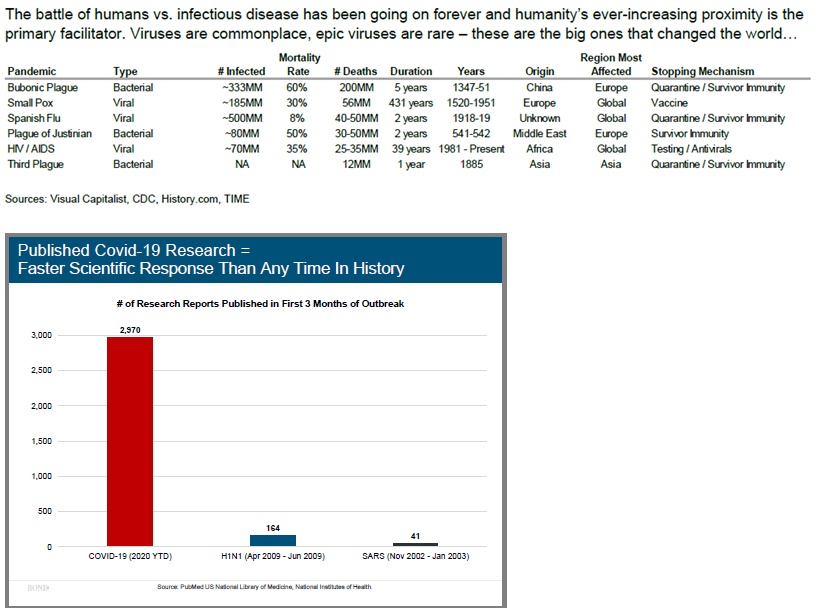 13) And even once the fear of Covid recedes, we will still likely be in a recession and life will be different.

i.e. Every CEO I speak with has been positively surprised by work from home and is interested in ways to cut costs via work from home even after the economy reopens.

14) And private equity is generally only planning on bringing back 75% of furloughed workers.

So *really* curious to see how the market trades as the economy reopens but likely fails to normalize.

15) The irresistible force of the stimulus may keep winning - and "don't fight the Fed" is an adage for a reason - or the severe economic decline and low likelihood of a near term normalization may begin to slow the market down.

16) Range of outcomes remains wide even if the Fed has truncated the left side of the tail.

I think this is a time of high uncertainty that calls for humility rather than conviction.

17) However, as always, I do have high conviction in the fact that America and the world will eventually recover.

18) And whatever happens with Covid, the market and the economy, there should be great opportunities in individual equities for long term focused investors given the wide intra-sector valuation spreads.