Tren Griffin+ Your Authors @trengriffin I work for Microsoft. Previously I was a partner at Eagle River, a private equity firm established by Craig McCaw. I am on the board of directors of Kymeta. May. 02, 2020 9 min read + Your Authors

1/ Buffett: "Most people come to our meeting to hear Charlie. At 96 he is in fine shape. It didn't seem like a good idea to have him come to this meeting. Charlie is in fine shape and he will be back next year." Charlie is now doing video streaming meetings.

2/ "At the start there was an extraordinary range of things that could happen on health and the economy. The range of possibility on the economy has narrowed." He said not the worst case and not the best case is expected. We "don't know the denominator" and that is important.

3/ The appearance of improvements in the US economy over 231 years wasn't smooth. Buffett told the story of the FDIC. My grandfather who worked through the depression always opened an account at a new bank if he hit the limit on the insurance. He died owning many bank accounts.

4/ This is a copy of a letter my grandfather received from his employer "The Seattle Trust Company" in September of 1934 temporarily reducing his salary to $110 a month. The depression caused many people to lose faith in stocks and that created bargains for certain investors. 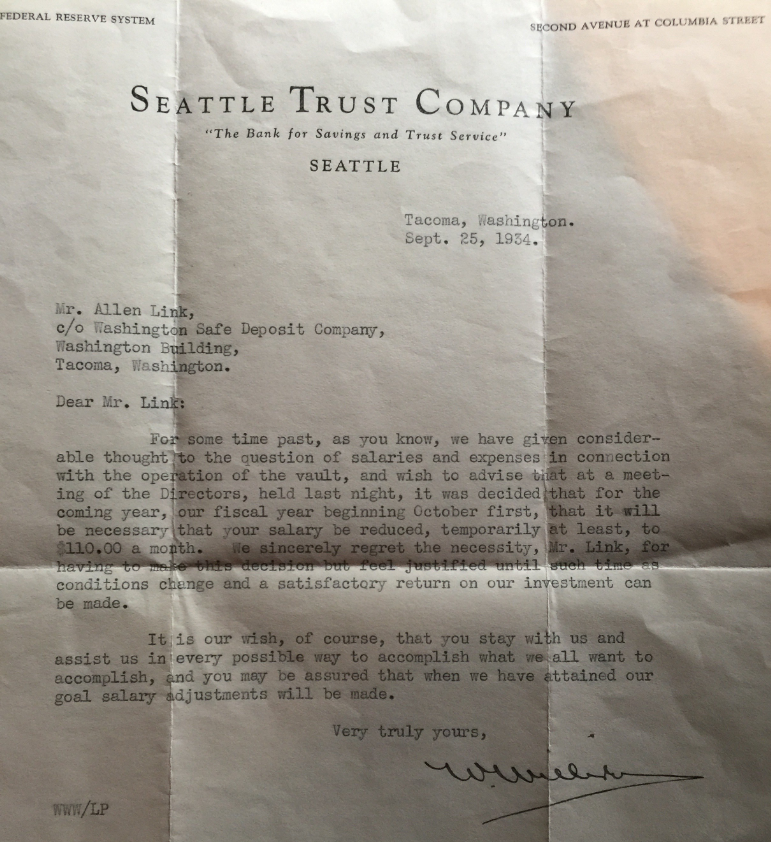 5/ Buffett: "I don't believe anybody knows what markets are going to do tomorrow, next week, next month or next year. Anything can happen. You need to be careful about how you bet simply because markets can do anything [short term]. Nobody knows what's going to happen tomorrow."

6/ Buffett: "It is hard to think about things that haven't happened. You never want to use borrowed money to buy into investments. Berkshire literally tries to think of the worst case. Despite that there is every reason to participate [in long term improvements in the economy]."

7/ "Equities will outperform US Treasuries over the long term. People too often bring the attitude to stocks that you must develop an opinion on them minute by minute just because they are quoted minute by minute. Graham taught me stocks are a partial interest in a business."

8/ Buffett pointed out that Mr. Market is not only bipolar and drinks too much alcohol but for the second time today noted that he may smoke pot. This weed consumption appears to be a new attribute associated with Mr. Market. That naturally raises the question: Sativa? Indica?

9/ Buffett: "For some period, certainly for the balance of the year, our operating earnings will be considerably less than they would have been if the virus hadn't come along. ... Our three major businesses are in a reasonably decent position. These business will produce cash." 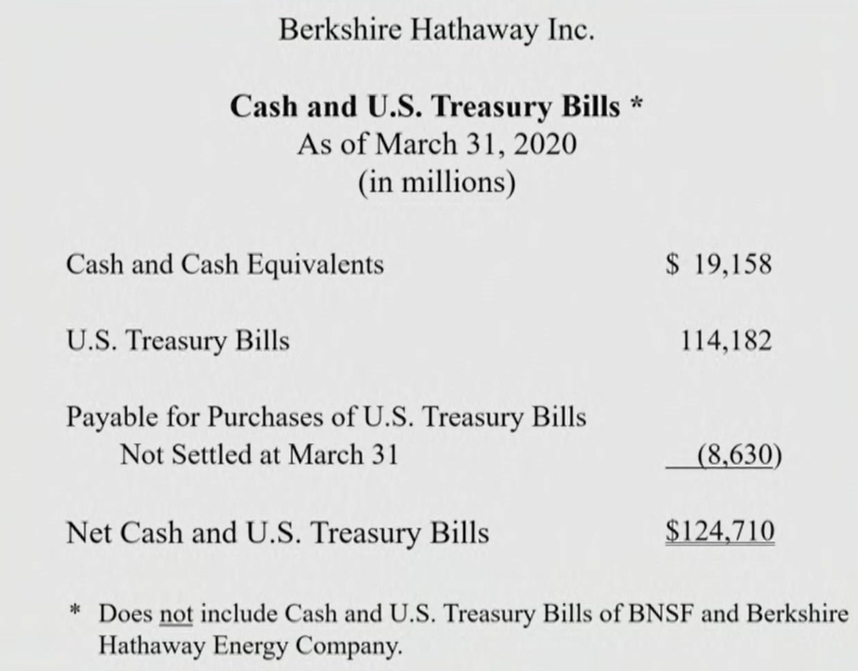 10/ Buffett: "We always feel our job is to be a smart trustee. We always operate from a position of strength. There are times when money almost stops like 2008 and 2009."

"We own 100% of the stock of many businesses [that should be though of as additional equity holdings]."

11/ Warren gives a shout out to Powell: "The Fed acted in mid-March [on the 23rd] in a huge way that enabled things play out they way that they have. Businesses who raised cash in late March should write a thank you note to the Fed. We do know the consequences of doing nothing."

12/ Buffett said he made a mistake in investing across the airline business. He mistakenly believed airline earnings "would go up across the industry. The airline business has changed in a major way and the future of airlines is much less clear. [Airlines] have too many planes." 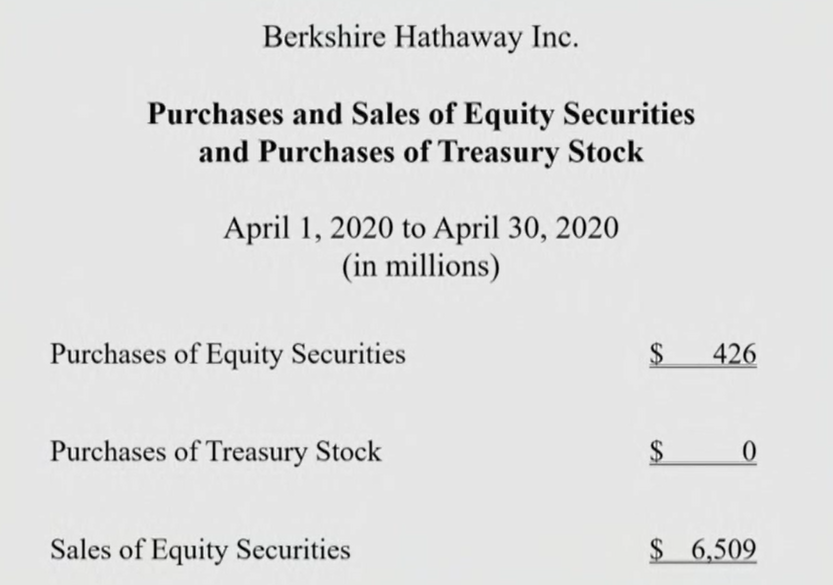 First question was about which airline positions were sold and how. "There are certain industries that are really hurt by a forced shutdown.... We have sold the entire positions [in the big airlines Berkshire owned."

Greg Abel: "I have nothing to add."

14/ "You have to be prepared if you buy a stock to have it go down by 50% or more. There have been three times in Berkshire's history when the stock has gone down by more than 50%. If you had owned these Berkshire shares at those times with debt, you may have been wiped out."

15/ "The Fed did the right thing in mid-March that meant companies got the chance to finance themselves in huge ways since then. There has been since then no shortage of funds available to businesses at rates that we would not accept as investment returns." Phones aren't ringing.

16/ Buffett: "We aren't in the business of subsidizing any business with Berkshire shareholder money, even within the Berkshire portfolio. Berkshire is almost certain to generate cash. We own Treasury bills."

Abel: "Very few of our portfolio business have required cash."

17/ Buffett: "Five years from now Berkshire will be employing even more people." But there will be disruptions before then... We have a lot of Easter candy in inventory.

Abel: "We do have retailers who have shut their doors. We will re-employee people at businesses like See's."

18/ Buffett: "What's happened in the last couple of months is that business conditions have accelerated the decline of a few of Berkshire's smaller businesses that were already in decline. This won't happen with any of Berkshire's mid-size businesses."

19/ Buffett: "If we owned all of an airline right now, it would be a very difficult decision about whether to accept continuing operating losses." Buffett said that Berkshire selling its entire partial stakes in the airlines was not unlike selling an entire business.

20/ Buffett: How fast and how the aircraft manufacturing industry recovers is "out of our control."

21/ Buffett: "The amount of litigation that will be generated by Covid-19 will be huge." Whether an insurance company covers business interruption that includes pandemics is important, but he doesn't feel Berkshire has much exposure. But there will be lots of litigation.

"If you come to us with unusual insurance coverage needs we will consider writing it."

23/ Abel: "Berkshire businesses have not participated in any US government PPP loans."

Buffett: "To my knowledge, no Berkshire companies have received loans offered by the US government. That includes Oriental Trading and Nebraska Furniture Mart."

24/ In response to an batshit crazy question about the days of index funds being "over.":

"You don't make a lot of money advising clients/running index funds. You make the most money selling active investment advice. I haven't changed how I provide for my wife in my will."

25/ Buffett: "It would be a lot easier to outperform the broader stock market if we were only managing $5 million. There can be advantages and disadvantages to size."

26/ Buffett: "Charlie and I are not going anywhere voluntarily. We may go somewhere involuntarily." He said they will remain involved in capital allocation as long as possible.

Strong shout out by Buffett to Ajit Jain as an amazing master of insurance underwriting.

27/ Buffett: "When you buy into a huge oil production company how it works out mostly depends on the price of oil and less on production. The Oxy commitment was attractive at prices that prevailed. It doesn't work at $20 a barrel. Production of US oil will drop significantly."

28/ Buffett: "If these oil prices per barrel prevail there will be a lot of bad debts associated with energy loans. Given that reality on debt in the oil industry, you can imagine what will happen to the equity holders in the oil production companies."

30/ Buffett: "Negative interest rates are the most interesting question in economics. We're facing a period where we will test whether the world can continue to do this. We are doing things where we don't know the ultimate outcome." Buffett would not have expected this outcome.

31/ Buffett: "The best businesses don't require a lot of capital. If you can find a business that doesn't require capital when it grows, you really have something valuable. That attribute is certainly not the railroad or energy business - both are still attractive businesses."

32/ Buffett said a government defaulting when it can pay in its own currency isn't going to happen. This was another batshit crazy question.

IMPORTANT: It is fantastic to have Becky asking these questions. So much wasted time at the meeting has been eliminated. Less boring

Buffett windmill dunks on the question from Kass with his answer. It is just another way to distribute capital. "People can be stupid with dividends too."

Buffett: "Share buybacks will continue to be a political football."

34/ "We decided as a people to shut down the economy in a big way. That wasn't the fault of anyone. Part of the government standing behind banks is that they must behave well. FDIC has $100B in reserves.

How to spot the problems of people doing stupid things isn't always easy."

36/ Buffett: "It doesn't make *any* sense to borrow money at credit card rates. The world is in love with credit cards. Don't be paying even 12%, let alone 18% to anybody." Pay them off first! You will not earn that much investing with the money you use to pay them off.

37/ "PPP is the right idea. You can't do it perfectly but they are trying to do the right things."

38/ Buffett answers a Bill Murray question: "This country is very rich. The people who are doing the work on the front lines that Bill is asking about "should be able to have a decent life. Don't forget about people who don't happen to have a skill that markets value highly."

39/ Buffett: "We all drew straws for particular skills that have different market values. And there is also randomness in outcomes. We can do a better job at keeping capitalism in place and making sure everyone participates."

40/ Buffett: "IQ doesn't necessarily correlate with wisdom. I know people who don't have high IQ, but are wise. Graham is one of the three smartest people I have known." He refused to name the others so as to not disappoint anyone.

To close: "Never bet against America!"