I think it would be a good time to remind everyone, where economic prosperity of nations arise.

So, a (long) thread to economic success, for nations.

I guess the easiest way to start this, is to describe what does NOT work.

What the experience of Japan, with her handling of the early 1990's financial crisis, taught us, is that you NEVER EVER enact a national bailout of banks and corporations.

It's the surest way to prolonged economic malaise.

Japan "fixed" this, with massive increase in debt. 2/ 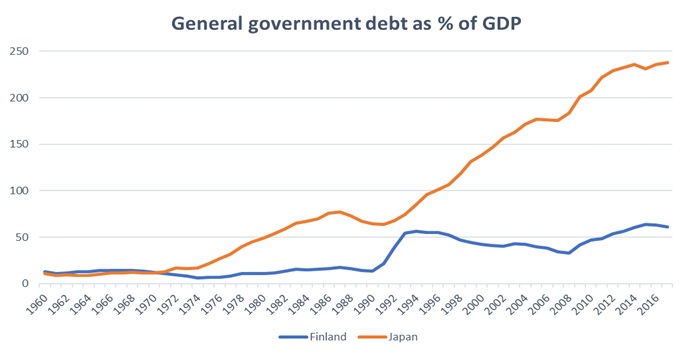 What we need to understand is that productivity growth is everything that matters, economically.

In simplified terms, it's a process that increases the productivity of a human worker thus increasing his wage and making products cheaper.

This is driven by technological... 3/

...innovations ranging from spinning-jenny to industrial robots and beyond.

But, there's an important angle on how technological innovations lead to gains in productivity. They need to included in the production process.

This requires that someone takes a risk... 4/

... and invests in a new technology acquiring naturally also the required staff and production facilities.

Often this requires that either, the firm operating with older technology goes 'belly up', or there's enough risk capital to fund the investment. 5/

And, this is where it gets tricky.

The capital, quite often, needs to be private to yield sufficient productivity growth.

The new money going into investment to produce something with innovative technology, needs to be "market-priced" and subject to failure. 6/

Majority of risky investment projects fail, and they need to fail to improve the concept and applicability of the project. Sometimes, just the timing is wrong.

We need to have a constant loop of risk-failure/success to seed out productive investments. 7/

Failures uncover sustainable businesses, while successes accumulate income and capital to be invested and consumed.

This, effectively, is the process of 'creative destruction'.

What happens, if risk is removed from the equation through, e.g., government intervention? 8/

Companies and projects that would be doomed to fail, according to the market logic, linger on. They consume capital and workforce from their more effective use in new companies.

This was first observed in Japan after her "national bailout" in 1990s. 9/

Facing a public anger over bank bailouts in the early stages of the crisis, the government allowed and, in some cases even encouraged, banks to extend loans to ailing businesses.

Government policies permitted the use of accounting gimmicks,... 10/

... which with the lacking transparency, allowed bank supervisors to implement policies that enabled banks to downplay their loan losses and overstate their capital.

These measures saved the financial sector of Japan, but at a heavy cost. 11/

Because the banking sector of Japan was not restructured, their lending operations diminished considerably and become biased towards ailing unprofitable companies.

The reason for this was simple: the banks tried to avoid further losses from company bankruptcies. 12/

After the crisis, the domestic non-traded goods sector of Japan hold the largest share of unprofitable companies.

Thus, Japanese banks kept extending lines of credit to unprofitable ("zombie") firms to avoid losses that would have occurred if the firms would have gone bust.

This process 'zombified' the Japanese economy and pushed them to the never-ending road of debt and... 14/

Finland issued strict restrictions on how the bailout funds to banks would be distributed.

...including a demand that any bank receiving funds provide a detailed plan on how it would return to profitability.

The leadership of participating banks were required to personally commit to the specific program aimed at returning the bank to health. 16/

Yet, credit depression was imminent, which pushed households and corporations into defaults and bankruptcies.

However, because only the most profitable Finnish corporations survived the crisis, they were able to eventually power a strong recovery, ... 17/

...supported by the restructured banking sector and the depreciation of the markka.

Crises need to be let to play out to purge the #economy from unprofitable investments and debt. It will be painful, but it sows the seeds of a strong economic recovery.

In an economy, short-term pain should NEVER be exchanged for long-term stagnation. 19/

Now, we are faced with an unprecedented crisis.

Some are calling for the central banks or the "debt jubilee" to fix everything, but they won't.

Massive bailouts would just make the economic pain to last longer and be more severe. /20
https://gnseconomics.com/2019/03/11/the-dangerous-zombie-infestation-of-the-world-economy/ …

We need to embrace the "reset".

It's the only way to guarantee a strong recovery from this crisis.

All other roads lead to a prolonged economic malaise.