CSIS is hosting a webinar with NASA Administrator Jim Bridenstine on the agency's "plans to go to the Moon and Mars as well as NASA's broader role in overall U.S. foreign policy and national security." 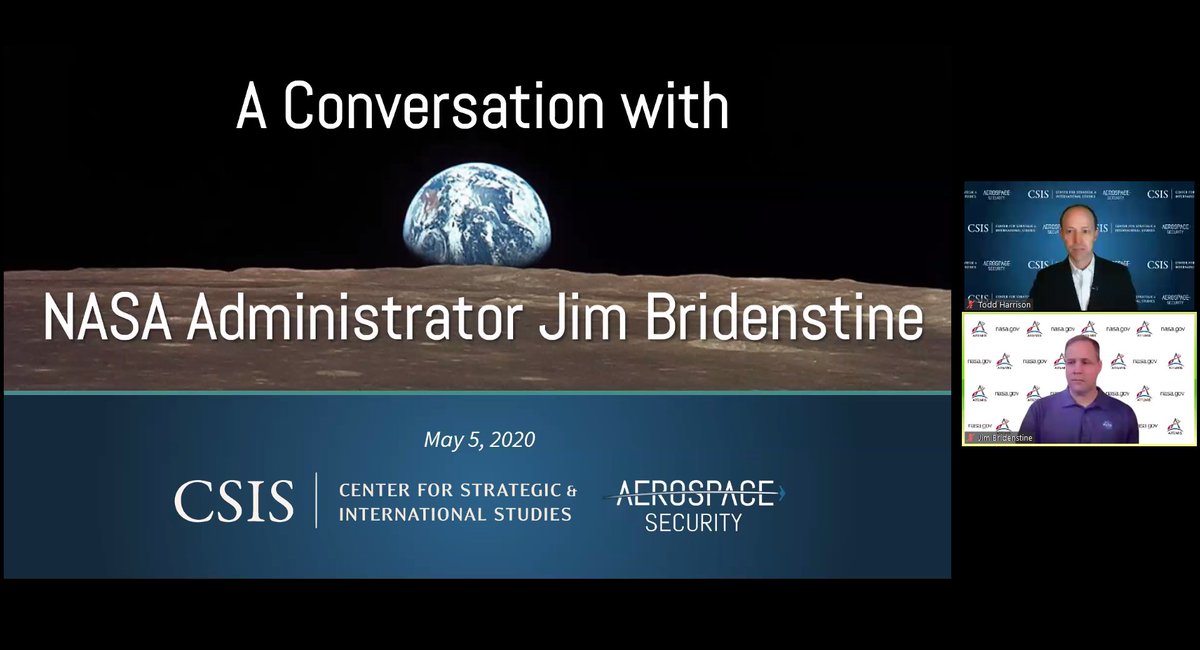 Bridenstine: "What was interesting is how much noise it created when China landed on the far side of the Moon ... it made a lot of people concerned."

Bridenstine notes the recent and upcoming milestones of the New Horizons spacecraft, the OSIRIS-REx mission, and SpaceX Demo-2:

"The United States of America and NASA are doing stunning things all the time."

Bridenstine: When members of Congress were calling about China landing on the far side of the Moon, it "became apparent to me that we need to be more engaged in the national security apparatus," not in military sense but in a sense of "science and technology discovery."

Bridenstine: "The International Space Station is an example of how NASA can be used as a tool of diplomacy," noting that the ISS has hosted experiments from 108 different countries/territories and astronauts from 19 different nations.

Bridenstine on Artemis: "This time when we go to the Moon we're going with international partners. We want to take what we've learned from the International Space Station and we want to broaden it out all the way to the Moon."

Bridenstine points to the Apollo 8 broadcast on Christmas Eve as example of "an astonishing too of information power." The three astronauts' broadcast from lunar orbit "was seen or heard by 1/4th of the people on the planet," even "people behind the Iron Curtain."

Bridenstine said that, when NASA landed InSight on Mars two years ago, "it was astonishing to me to see how many hundreds of newspapers we were on the cover of," including "a publication in Tehran ... the hard line newspaper of the Islamic Revolutionary Guard Corps."

Bridenstine: "This is the kind of thing that I think is important for our country, because it enables young people. It enables us to reach young people all around the world and change their perceptions towards the United States of America."

Bridenstine addresses low Earth orbit internet satellite constellations (like Starlink and Project Kuiper), saying "those constellations are going to be amazing and NASA of course wants to see them be successful."

Bridenstine: "We do have challenges with space debris ... We've got to make sure we're very responsible with how we move forward with a lot of these low Earth orbit constellations that are going to transform how we live."

Bridenstine on SpaceX Demo-2 and the Commercial Crew program:

"The goal is not just to get our astronauts to the International Space Station. The goal is to create a domestic commercial marketplace that enables us to have exports."

Bridenstine: We've done commercial resupply (companies launching cargo to the ISS for NASA), we're in the midst of doing it with Commercial Crew, and "we're eventually going to have commercial space stations in low Earth orbit."

Bridenstine lists a few things that can be done on the International Space Station but not on Earth:

Bridenstine notes Australia, the United Arab Emirates and Luxembourg as "that are stepping up big time" in space.

"We're very keen" on the UAE, "a country that wants to not just lead in space exploration ... and get young women involved in STEM."

Bridenstine: "We need to make some investments as an agency into our capabilities to detect" deep space near Earth objects, especially those which could "come on a collision course with the Earth."

NASA and Space Force are working on this, he adds.

Bridenstine: What Space Force brings to NASA in detecting deep space near Earth objects is technology like "like cislunar space situational awareness that we can then use to help us inform our models."

Bridenstine clarifies that the first astronauts for the Artemis missions "are likely already at NASA within our current astronaut corps."

But "it's crazy to think the opportunity" that NASA's latest class has, from flying on Crew Dragon or Starliner or Orion.

.@ToddHarrisonDC: Is NASA rethinking the SLS program in light of the HLS landers flying on commercial rockets?

Bridenstine: "Absolutely not. We are not rethinking SLS when we think about how we're going to get our astronauts to the Moon."

Bridenstine emphasizes that SLS will launch the 2024 Moon mission, but "maybe that won't always be the case."

"Maybe there will be competitors that enter the market for taking humans to the Moon and even on to Mars."

Bridenstine on NASA's budget given the coronavirus crisis:

"It shouldn't change. In fact, the case for NASA spending is probably going to be enhanced."