I was hospitalized last week for a very accelerated heart rate, very low BP, and cycling oxygen levels. And my entire experience at Alameda hospital was of one of being punished for being “insubordinate”.

I’ve had such a hard time writing this down. I’m only doing it because it may help someone. But it’s hard to write down. I was in a very vulnerable position and had both my colleague/friend Mimi and her cardiac nurse cousin Jacinta on FaceTime.

The physician came in ready to discharge me before there was an exam. When Mimi and Jacinta asked questions and pushed back the doctor went ballistic. He refused to give me healthcare if they were on the phone. I could get healthcare only if my advocates weren’t on the phone.

You have to understand that I was woozy. I was having a very hard time communicating. But I wasn’t allowed to have help. When he came back in the room he kept wanting to talk about my friends tone or my tone. I told him I needed him to be focused on my healthcare.

Early in the process I had heard all the micro-aggressions, when I was struggling to put my words together asking if I spoke Spanish derisively. I was asked multiple times if it was diabetes. I told them to check my blood sugar that I had never been even pre-diabetic.

I was talked down to as if I couldn’t understand what was happening. I had to assert several times that I was a weightlifter, a CEO, a Tía, a human. And I hated it. I would never use those things as a way to demonstrate I had value

and ultimately still understood that was the only way to connote that I had value in this very messed up system. My oxygen levels were cycling from the 70’s to 90’s and the doctor told me the 70’s didn’t count. That I would be out of breath if they were true. 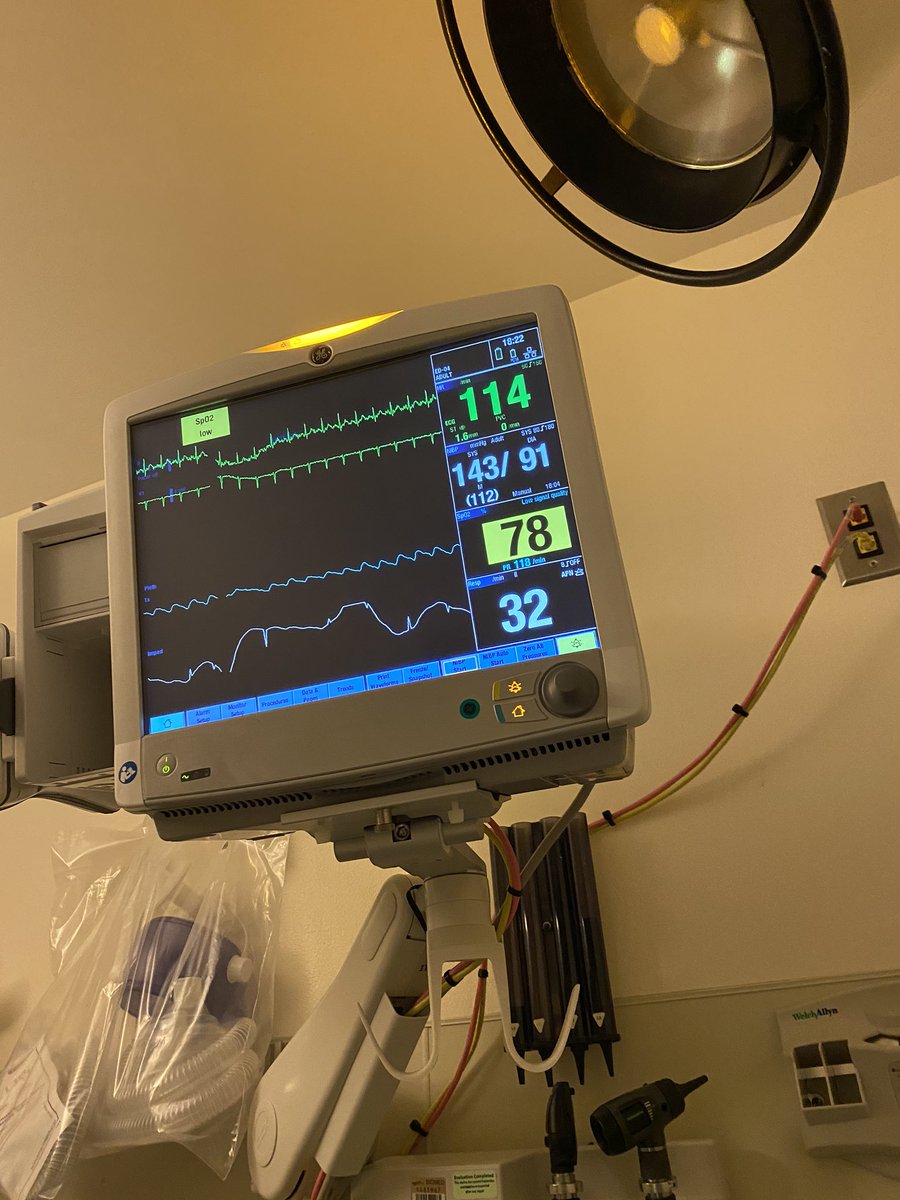 My heart rate was staying between 115 to 134 for hours. The attending was doing nothing about it. Mimi calls @nmsanchez @hutchamachutch @laurawp trying to figure out what to do for me. Laura gets a friend who is a doctor to call the hospital and get looped into my care.

The attending comes into yell at me telling me how inappropriate that is. How he wants the doctors number to call her and tell her how unprofessional she is. I say I want a different doctor, he tells me there are no other doctors.

I say I want a patient advocate, I’m given hospital admins number and told I can call in the morning. In the mean time, my whole damn community is calling medical people they know to ensure what is happening is not right.

Three medical professionals confirm that my case is being mismanaged. So my people start trying to transfer me. I communicate this to the doctor that I want to be discharged and suddenly he is concerned with letting me go.

He tells me that my heart rate is too high for that. He also warns me that I’ll be incurring lots of medical debt because insurance doesn’t like paying for more than one hospital stay. Meanwhile, every time I push back, it’s a large reaction, like I’m questioning his authority.

I had been reading about Covid patients having clots and strokes and wanted a CT and ultrasound on my leg (I had been having shooting pains), at first they told me it was a cyst behind my leg and I said “how can you possibly know that, NO ONE has even examined my leg”

I got talked to about my tone again. I ask for a CT and he says “That’s a lot of radiation next to your breast tissue, do you want breast cancer? I’ll only agree to this if you say you’re fine with getting breast cancer”

So I have to say I’m fine with getting breast cancer in order to get a CT that never came.

It gets to the point that whenever he comes in the room, my heart rate goes 120ish to 130’s. I’m trying to calm myself down. I am telling myself, I cannot let this man kill me. Meanwhile, I’m so dang weak. I have such a hard time. I have lost all faith the doctor would save me.

Finally Mimi gets on the phone and tells me “Karla, I know you’re tired. I know you want to go to sleep. I know you don’t want to push back right now but we need to save your life. Just give me 15 minutes to get yourself out of there and we will do everything else.”

So I’m sitting there tachycardic with my oxygen levels cycling, and I say okay. I tell them to discharge me. He tells me about all the debt and how I could have a heart attack on the bay bridge. I’m in a gown, unplugged trying to go get my clothes to get dressed.

He comes in several times demanding the numbers of the medical professionals that advocated for me. I tell him he can’t be my priority. He won’t leave the door. So finally I look him dead in the face and tell him...

“I need you to understand that I understand I may incur medical debt here. That I may have a heart attack. But I have lost all faith in the possibility you or this hospital would save my life. And so I’m willing to take that risk. Now please close the door, I need to get dressed”

He is then outside saying he wants the numbers of my people. I tell him, again, he is not my priority right now. I wait til he leaves and I don’t so much as sign a discharge paper. I go to the parking lot where @PerspectivePlus is waiting to take me to UCSF.

I’m so tired y’all and still actually afraid this wild doctor is going to chase me out to the parking lot. When I get to Trina’s back seat I can barely keep my eyes open. I just felt relief.

In the first 30 minutes at UCSF I had more exams then in 5 hours at Alameda hospital. When the nurse comes in there she says she heard about what happened to me (again, thank God for my people)

and she says she wants me to know that she believes me and I won’t be released until they are sure I’m going to be okay. And I start sobbing.

Here is the thing y’all, because of the particular way I was treated, I know that if I was a thin, white, woman I would have not been treated that way.

I’m writing this because all the coverage of Latinx and Black death as a result of Covid is being covered like it’s JUST the pre-existing conditions of racism that make us susceptible. That is certainly part of it, but the other part is the lack of value people see in our lives.

That lack of value puts us in a position where a doctor who has incredible power in that moment of personal vulnerability can prioritize what they see as your insubordination as a more important matter than your health.

Bias makes a doctor believe we should be grateful for any scrap of care we get and when that is questioned and we are considered ungrateful, our care gets compromised.

I am tremendously privileged and I watched the long arm of my community put their foot solidly in the ground for me.

It was watching the systems that are built to discard us at best and exterminate us at worst do that. And watching your community go “No the eff you don’t”

And I know that not all of us have the privilege of a bunch of Black and Brown activist, lawyers, doctors, community workers to be mobilized BEFORE our lives are snuffed out.

I’m am forever grateful, changed, and deeply moved by what everyone did to save me. And I truly believe they saved me. And we need reforms or data or accountability to be in place in order for our people to not be killed by medical systems.

Especially when our health is vulnerable in the first place.

Folks are asking about my current condition so I’ll add here. I’m gratefully without fever for the first time in 9 weeks. Which is such a relief. I still have persistent tachycardia that I’m seeing a cardiologist and Infectious disease specialist about.

It’s hard to know whether this is my body recovering from Covid or having a long term problem as a result of Covid so lots of tests on the way to get there.

Also, there were so many people that stood up for me. Mimi Fox Melton chief among them. But thank you also to @nmsanchez @hutchamachutch @PerspectivePlus @EricaJoy @la_urene Navi, Danielle, several members of my team, and the serious army of people keeping me fed right now.

Update: my assembly members team reached out and put me in contact with the patient safety team for Alameda Health Systems. They are helping me file a grievance. One of the things I was really clear about was that my concern isn’t just that there was one bad actor.

What I want fixed are the many systems that I interacted with during this process that enabled a bad actor to live comfortably without fear of repercussion for treating a patient this way.

Thank you to everyone being incredibly kind. Trolls have found this thread but they do not outweigh the thousands of people who are reaching out with their own stories and well wishes. I take really serious my responsibility to do something here.