A federal judge will hear arguments this morning over whether to block the Trump admin's "public charge" rule on immigration for the length of the national emergency.

Hearing the motion today is U.S. District Judge George Daniels, who blocked the public charge last October in a blistering decision calling it "repugnant to the American Dream."

Earlier this year, the Supreme Court lifted that injunction, but allowed New York to seek a new one to suspend the rule for the pandemic during the national emergency.

The hearing is about to begin.

Up first is NYAG's counsel Elena Goldstein, who notes more than 28,000 people have died since New York filed its motion.

She says that nobody could have foreseen the global health crisis when when the court issued its injunction in October.

Judge Daniels asks Goldstein about his authority to take action, now that the Supreme Court has issued the stay of the injunction.

Goldstein noted that the Supreme Court specifically gave them leave to return to the district court for this motion.

Goldstein says they are seeking a "new injunction based on new facts."

"I recognize that the defendants argue in substance that plaintiffs have made these claims before," she acknowledges.

The suggestion that the SCOTUS has ruled on these claims asks the court to "close its eyes" to the facts on the ground, Goldstein says.

Goldstein says that a government alert recognizes that the rule could deter immigrants from seeking healthcare during the crisis.

"While DHS recognizes this problem, they fail to take it at all seriously," Goldstein says.

Goldstein emphasizes that the harms that those challenging the rule are worrying about are not predicted.

"They are actually happening now," she says.

The NYAG laid out some examples in their brief here:  https://www1.nyc.gov/assets/law/downloads/pdf/NY%20mem%20supp%20preliminary%20injunction.pdf … 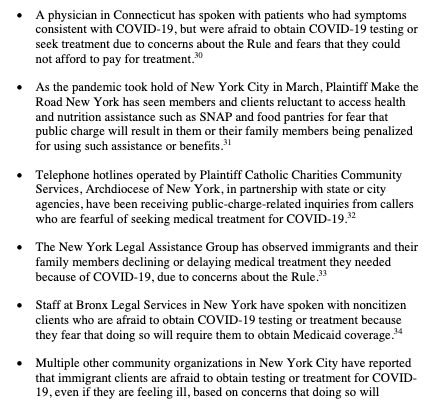 Goldstein says that the DHS alert is insufficient and inadequate because immigrants still have been deterred from seeking care.

"That provides no assurances for what it means for the federal government to take that into account," she notes.

The DHS alert ends with the caveat: "To the extent relevant and credible, USCIS will take all such evidence into consideration in the totality of the alien’s circumstances."

The alert does not indicate a pause in the rule during the national emergency, Goldstein notes.

Goldstein says the interests in mitigating the spread of disease outweigh the DHS's in imposing the public charge framework "right this second."

"The lives lost and the risks of getting this wrong... it weighs heavier than the interests of the defendants imposing this today."

Up last was attorney Robert O'Loughlin from the firm Paul Weiss, representing the immigration advocates Make the Road New York and other civil rights groups.

O'Loughlin notes SCOTUS did not explain its stay ruling and argues nothing can be inferred from the court's silence.

Next for the NYAG is attorney Ming-Qi Chu.

Chu replies that the legal analysis is not Covid-specific, but she notes that the threat is "more magnified" under the shadow of coronavirus than in a world where the harms were more hypothetical.

NYAG's Goldstein, back up again, slams the government for arguing that plaintiffs lack standing.

"During this time of crisis, it is almost abhorrent for the government to be arguing that [the policy] does not harm them."

"It can't be right that there is no role for this court to play when the executive passes rules that conflicts with duly-passed statutes by our Congress."

Schwarz: "We've alleged the same racial animus from all the decision-makers."

Now, the government is up:

DOJ attorney Keri Lane Berman calls injunction being sought today a "retread" of the one that the SCOTUS lifted.

This is the two-sentence order the Supreme Court issued denying an application to temporarily lift or modify a stay.

NYAG says the second sentence invited them to take the issue to SDNY, where they are now.

The govt denies SDNY Judge Daniels has that power.

Stretching that argument to an absurd conclusion, Judge Daniels cites the example: "Anyone who drives a Volkswagen is a public charge.”

That can't be the case, he notes.