I was thinking of putting a section on my website about all the alleged inspirations and birthplaces of Potter. I’d been writing Potter for several years before I ever set foot in this cafe, so it’s not the birthplace, but I *did* write in there so we’ll let them off!

For instance, I never visited this bookshop in Oporto. Never even knew of its existence! It’s beautiful and I wish I *had* visited it, but it has nothing to do with Hogwarts! 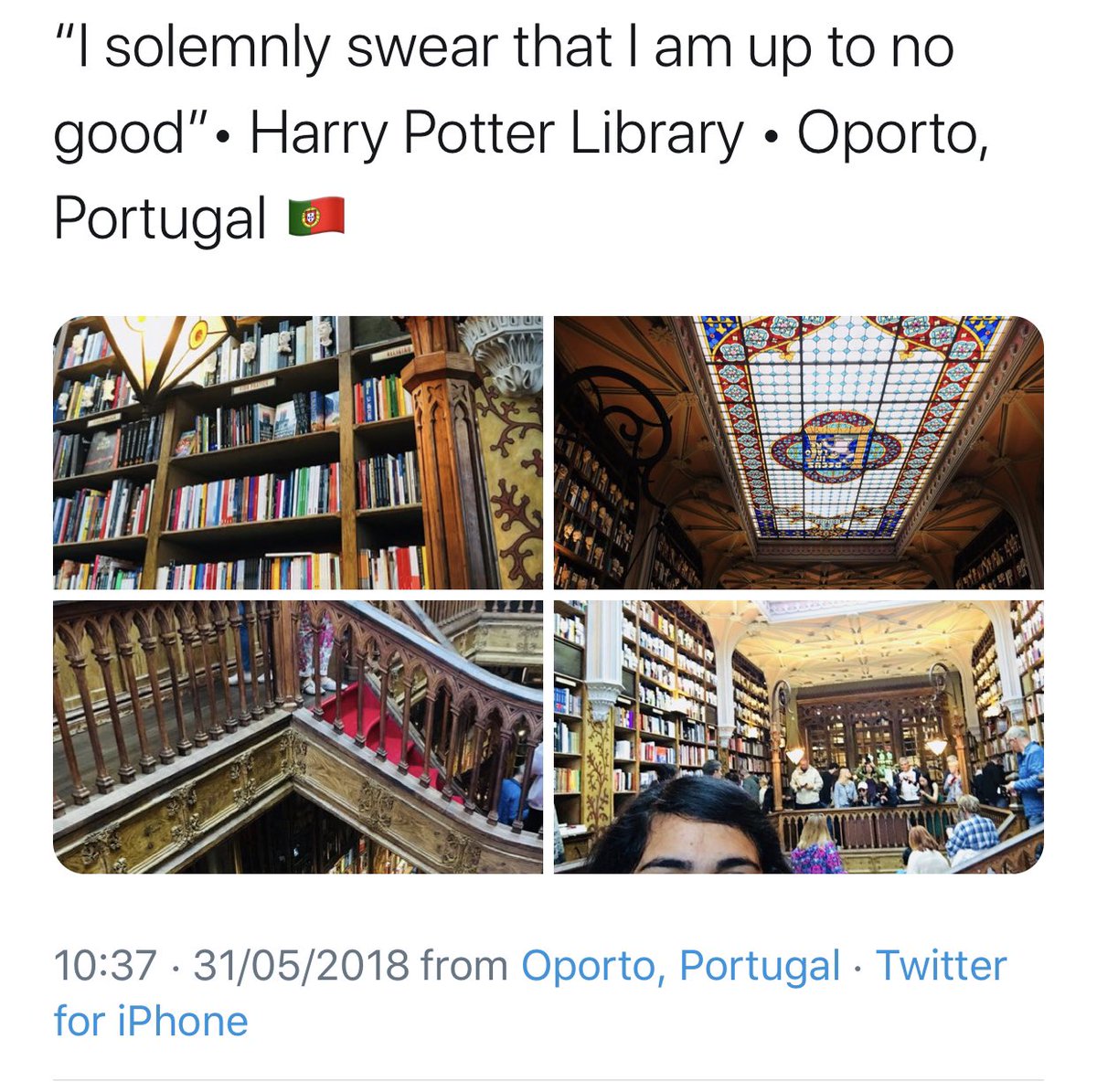 This is the true birthplace of Harry Potter, if you define 'birthplace' as the spot where I put pen to paper for the first time.* I was renting a room in a flat over what was then a sports shop. The first bricks of Hogwarts were laid in a flat in Clapham Junction. 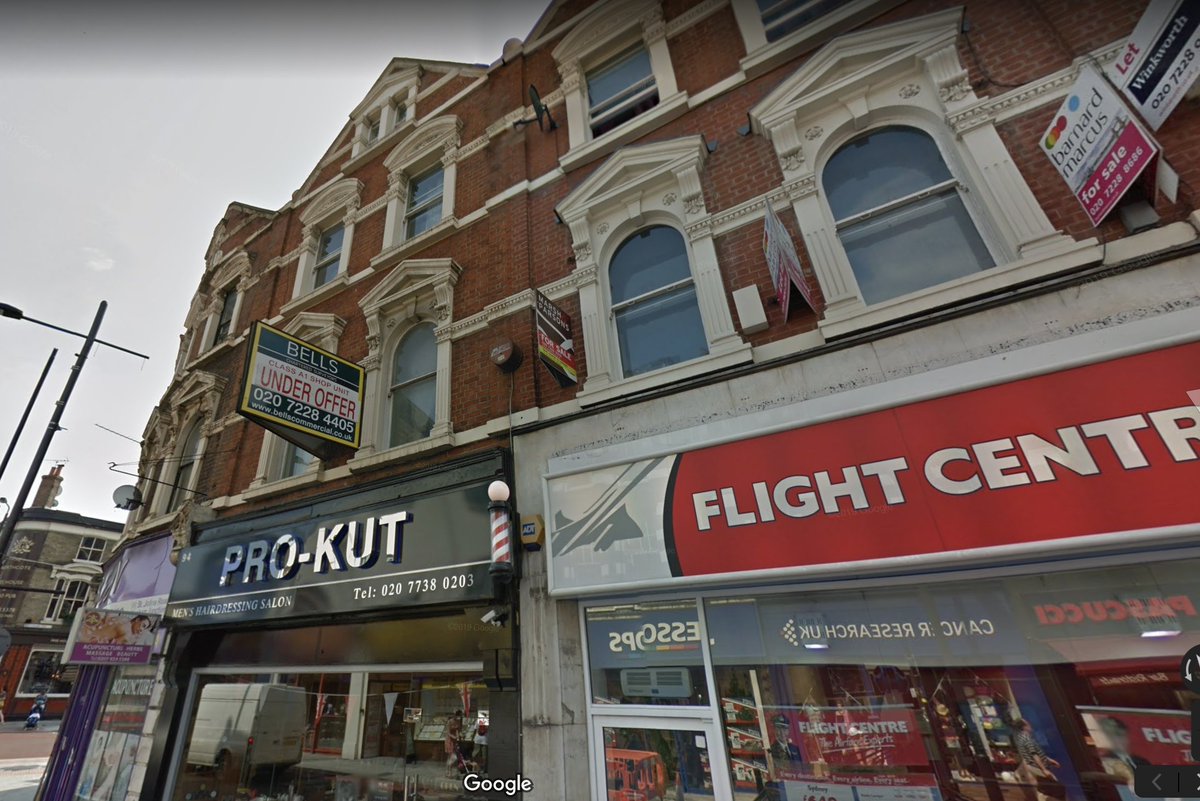 * If you define the birthplace of Harry Potter as the moment when I had the initial idea, then it was a Manchester-London train. But I'm perennially amused by the idea that Hogwarts was directly inspired by beautiful places I saw or visited, because it's so far from the truth.

This building is in Manchester and used to be the Bourneville Hotel (Pretty sure it's this building. It might be the one along). Anyway, I spent a single night there in 1991, and when I left next morning, I'd invented Quidditch. 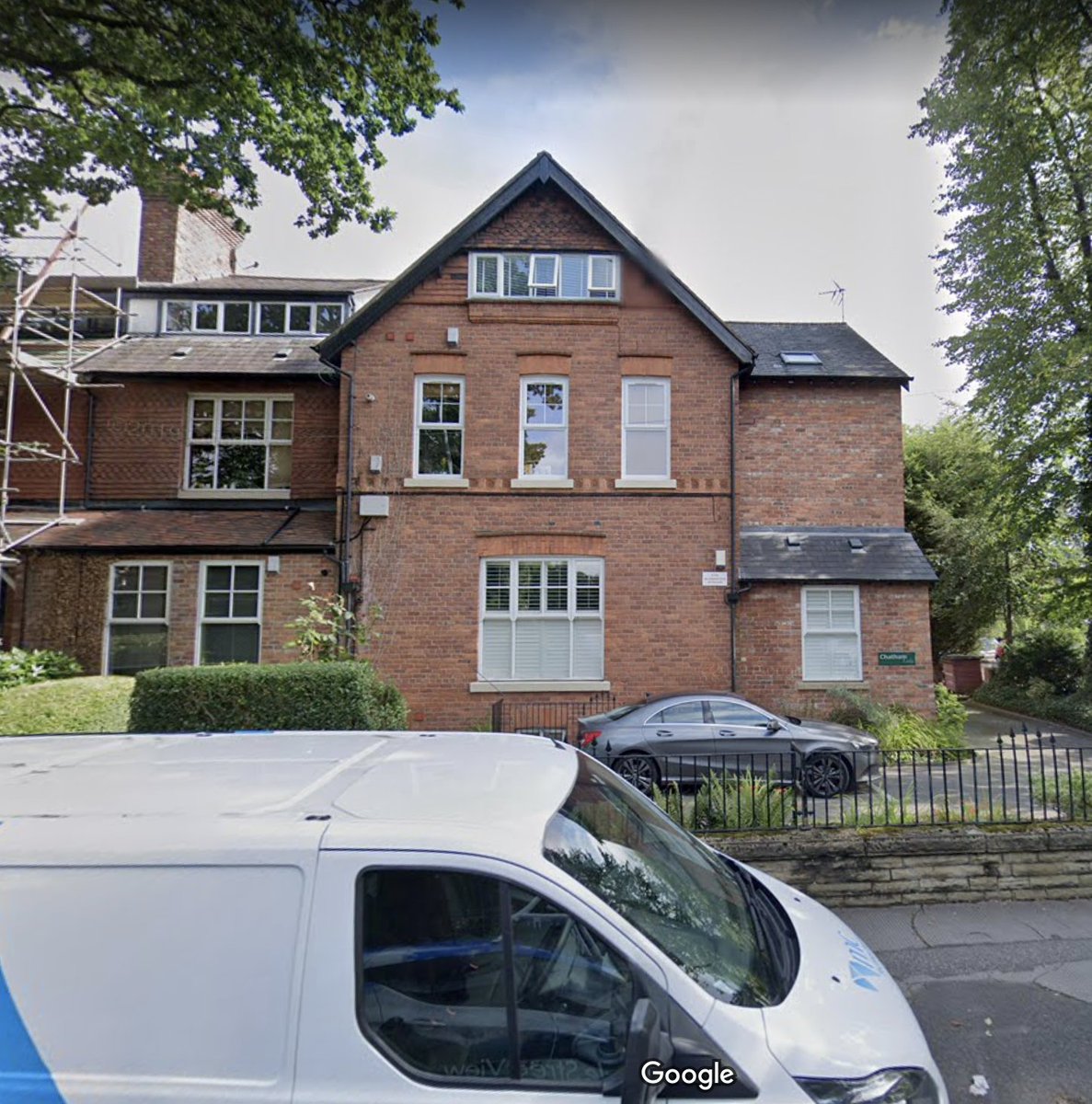 I sometimes hear Hogwarts was based on one or other of Edinburgh’s schools, but that’s 100% false, too. Hogwarts was created long before I clapped eyes on any of them! I did finish Hallows in the Balmoral, though, & I can’t lie, I’d rate it a smidge higher than the Bournville. 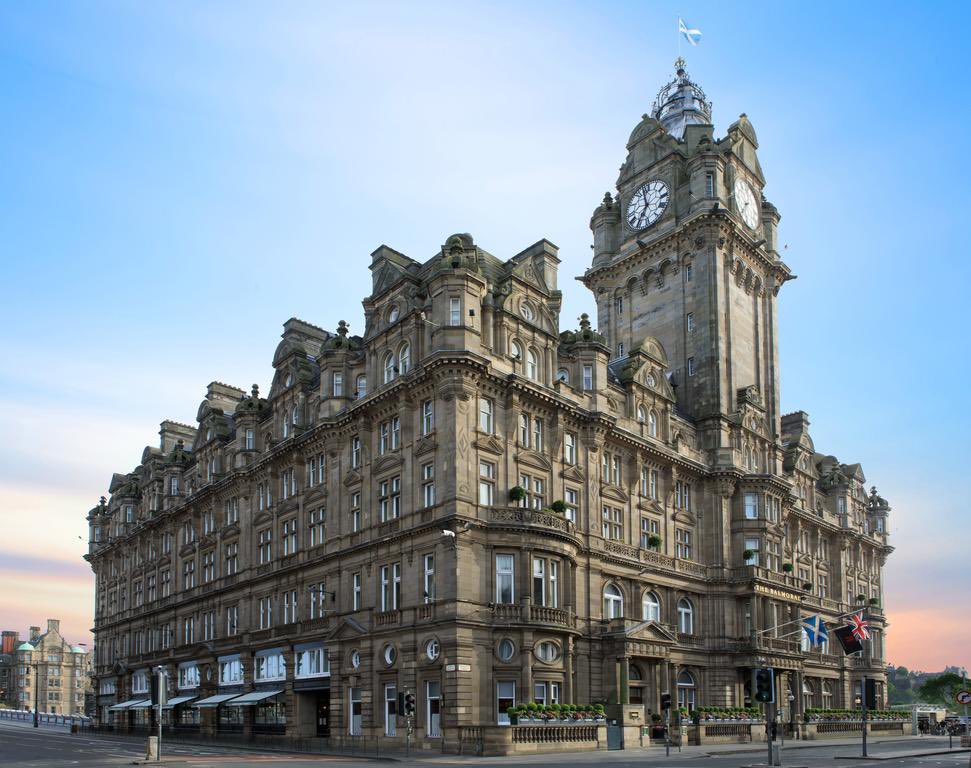 That one’s true! I used to write in Nicolsons all the time. I once wrote an entire chapter in there in one sitting and barely changed a word afterwards. Those are the days you remember. I think Nicolsons is now a Chinese Restaurant. 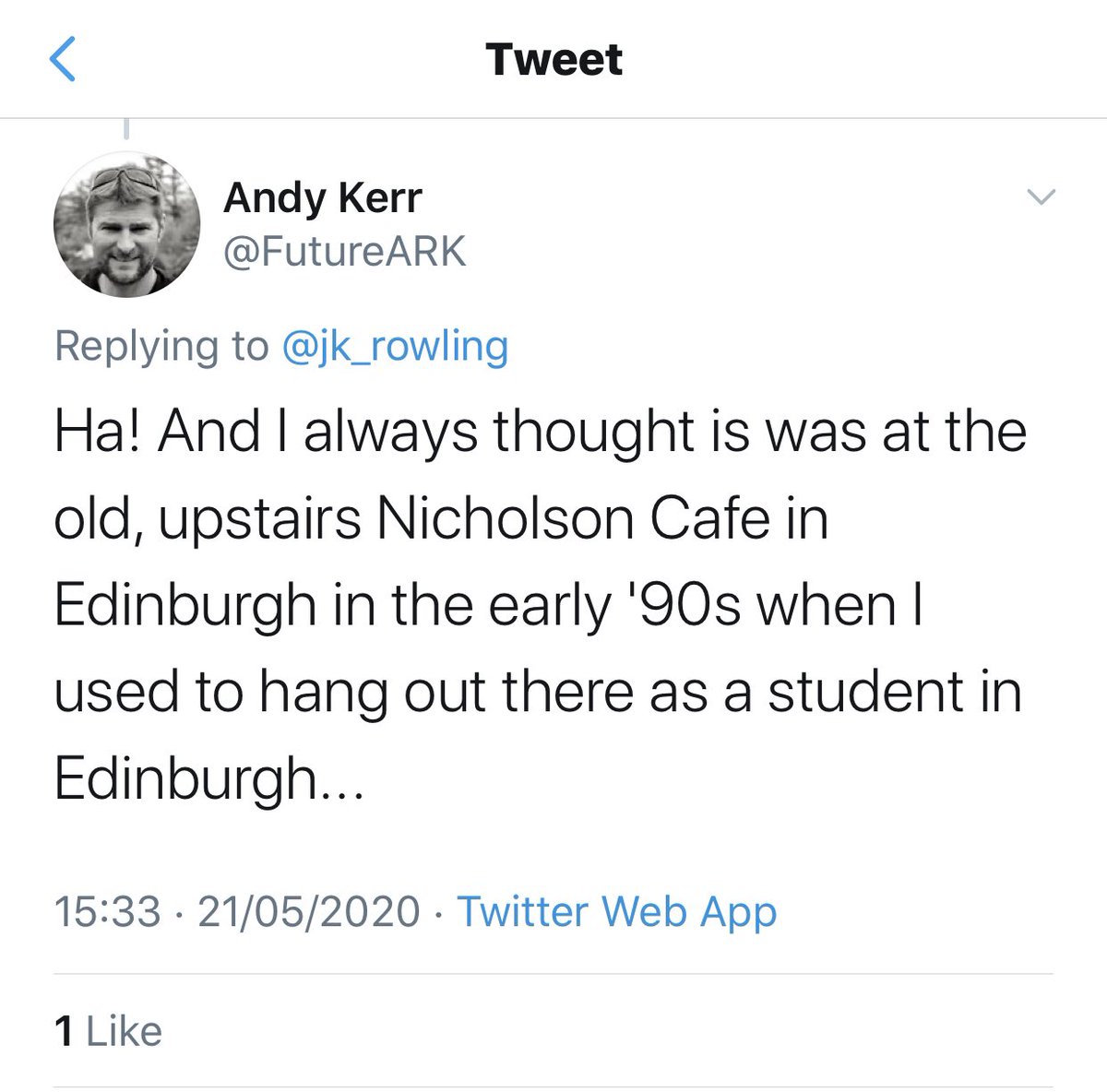 I wrote the bit where Harry buys his wand sitting under a tree, appropriately enough. (I can't absolutely guarantee they haven't taken away the old tree & planted a new one in the same corner of the field. I haven't been there for nearly 30 years. But I think it's this one.) 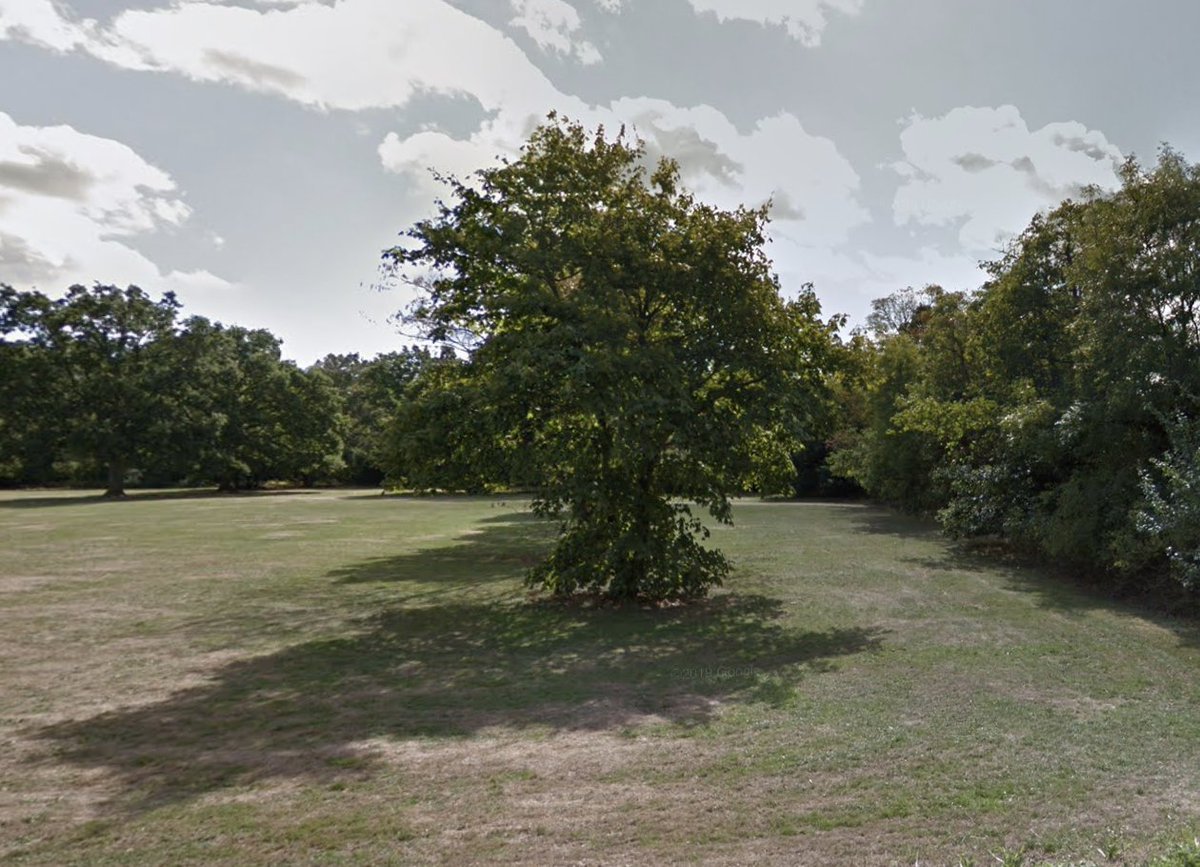 Yes, both of these are untrue, I'm afraid. I can't remember ever going to the Old Firehouse when I was a student and Gandy Street is nothing like the Diagon Alley in my head. 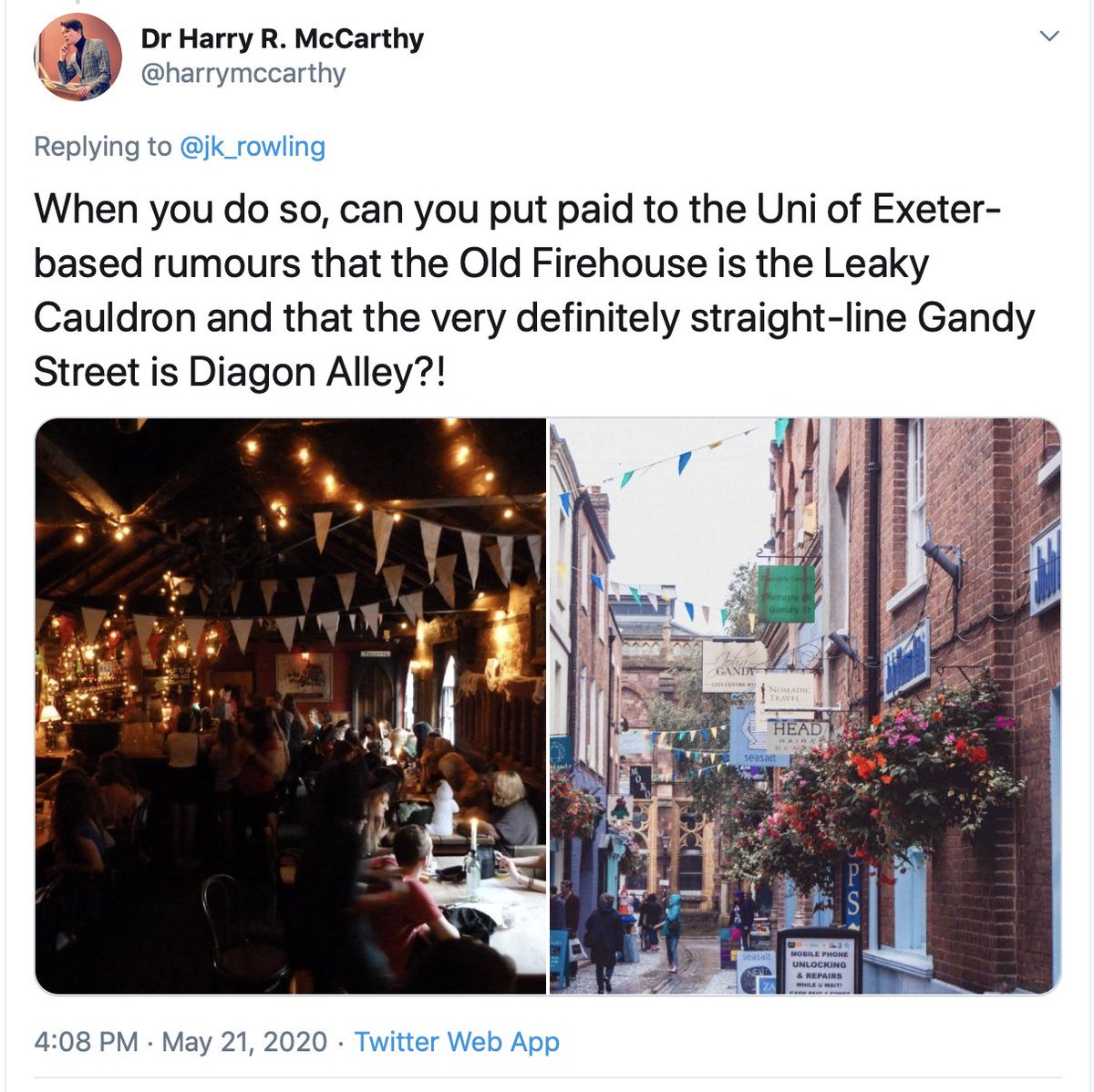 If it cheers up the people who're disappointed about the bookshop in Oporto, I wrote in here sometimes. This was probably the most beautiful café I ever wrote in, actually. The Majestic Cafe on Rua Santa Catarina. 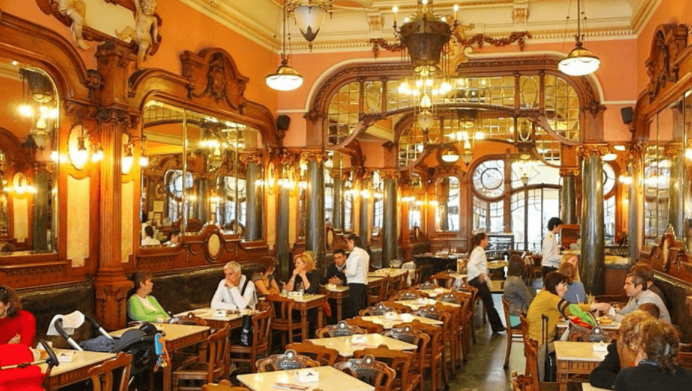 Well, looks like I've got a fight on my hands, because I've never seen or been to the Shambles...

My favourite bit of utter nonsense about Potter landmarks is still this one. I can't drive.

I made the mistake of mentioning Quidditch in this thread and I'm now receiving the usual complaints about the scoring system. I've already explained, but for those who never saw it the first time, here you go. 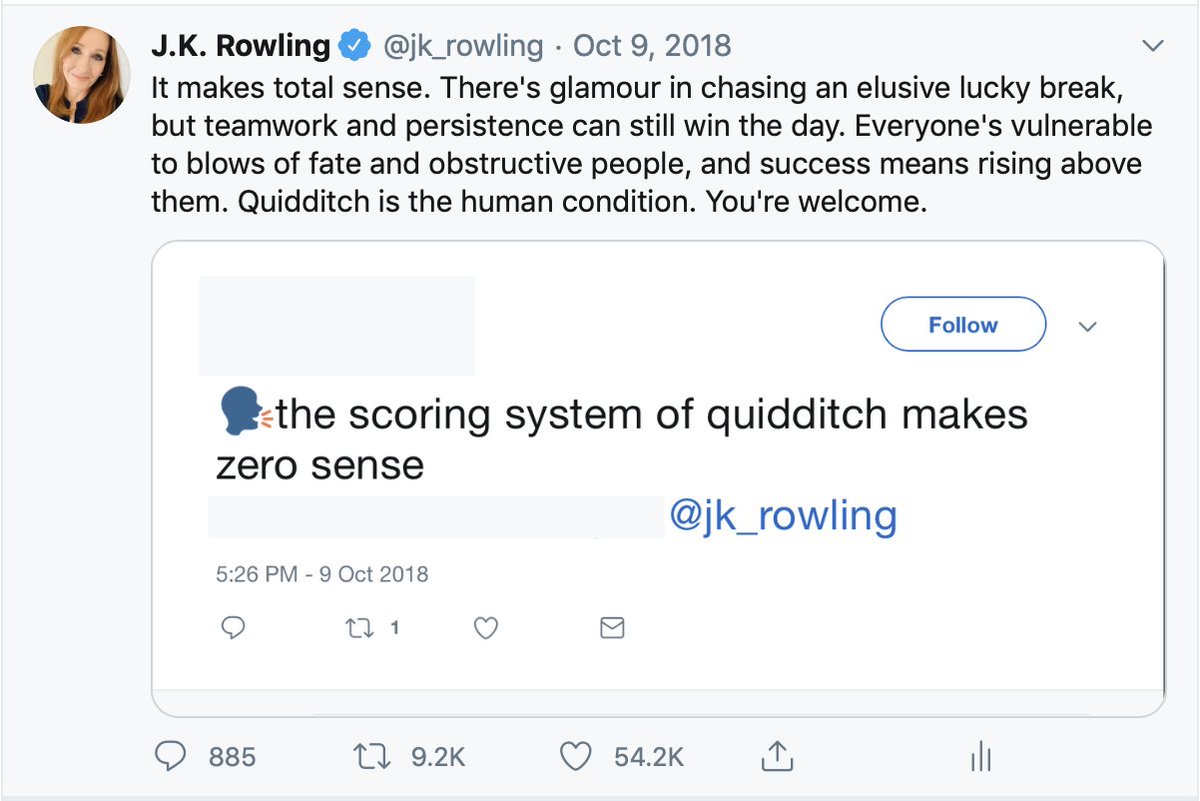 No and no, sorry. A truthful tour of HP ‘inspirations’ would involve a stationery guide pointing a stick at a picture of my head, which would be zero fun and nobody would buy tickets. If I’d genuinely been inspired by every old building, creepy alleyway, pub, graveyard and 1/2 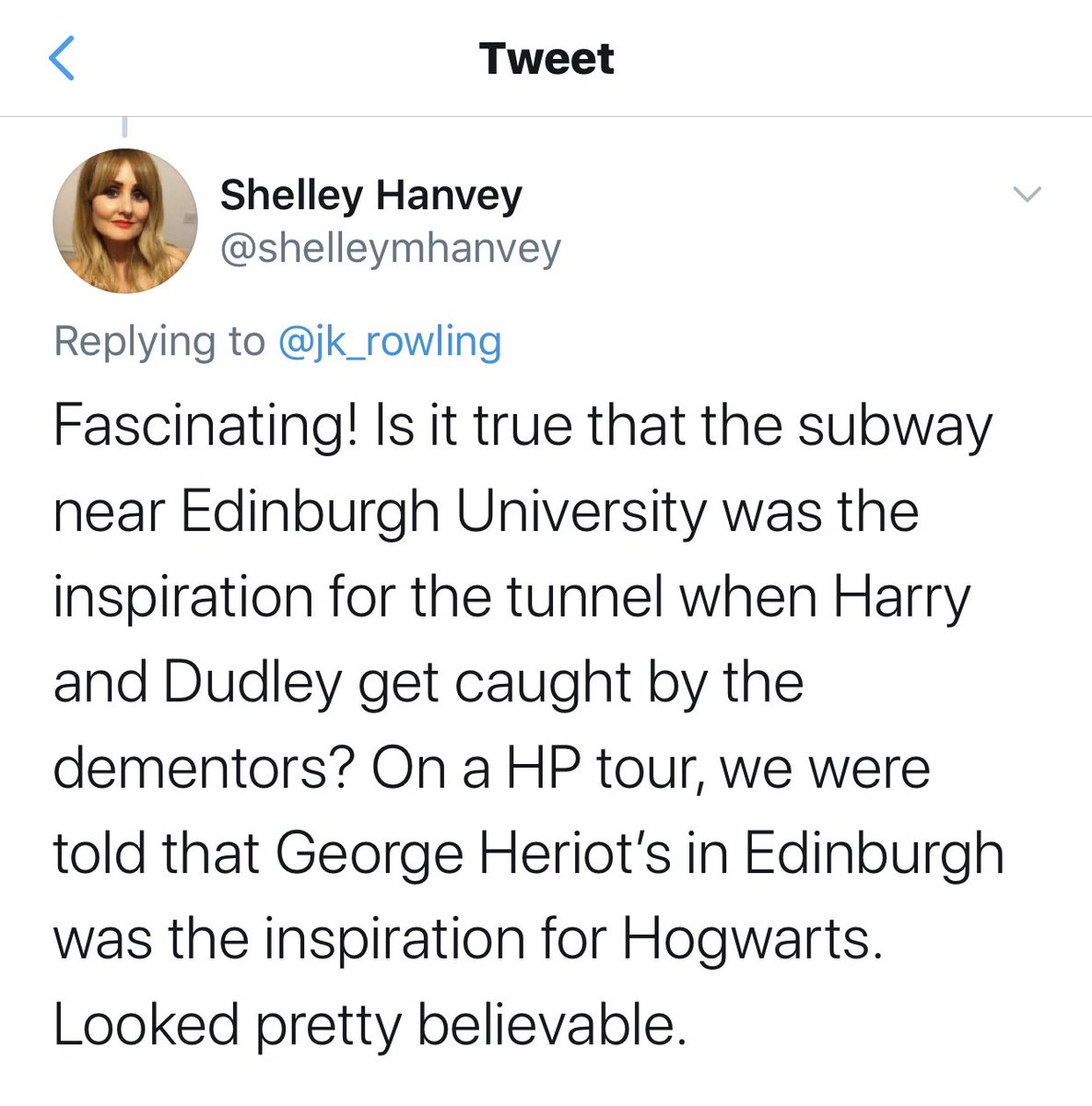 underpass that’s claimed, I’d have spent my late 20s on a non-stop road trip between locations and I promise I didn’t. I was mostly sitting in places I could get a cheap coffee/could afford the rent & making it all up. 2/2

I’m laughing here. Before I started this thread I had no idea how many different streets were claiming to be ‘the inspiration’ for Diagon Alley, but this is the first time I’ve seen Knockturn Alley! Neither was based on any real place. 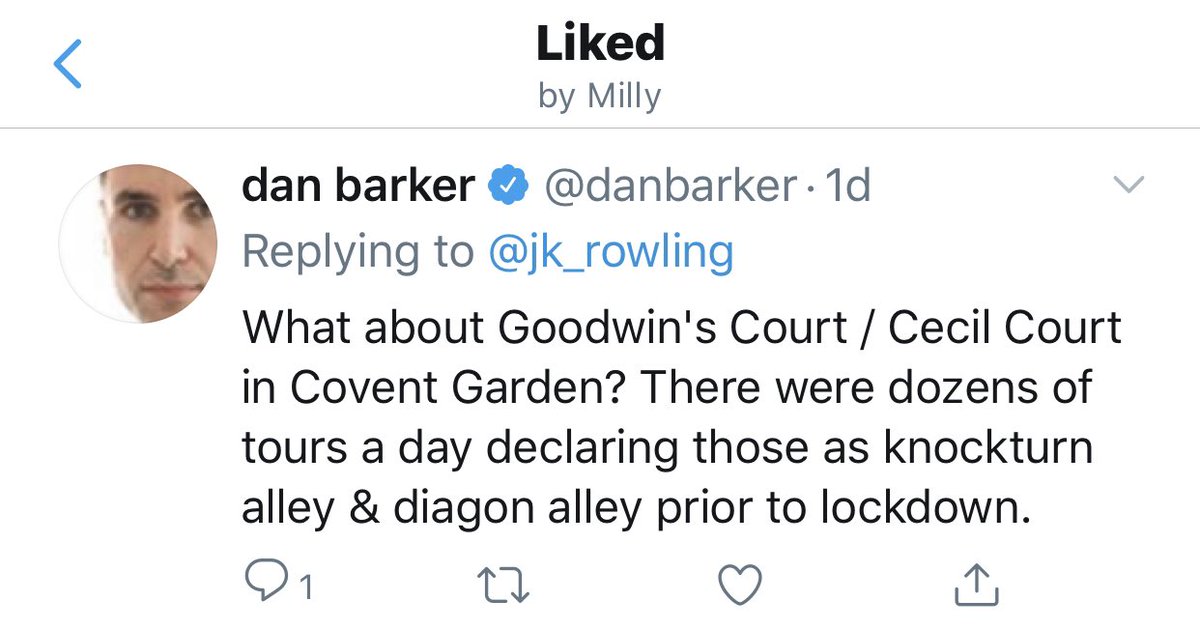 Starting to worry I might suddenly disappear. If that happens, please question the British Association of Harry Potter Tour Guides first.

Real Harry Potter inspiration alert: I walked past this sign every day on my way to work when I was living in Clapham . Much later - post-publication - I revisited the area & suddenly realised THIS was why 'Severus' had leapt into my head when thinking of a 1st name for Snape. 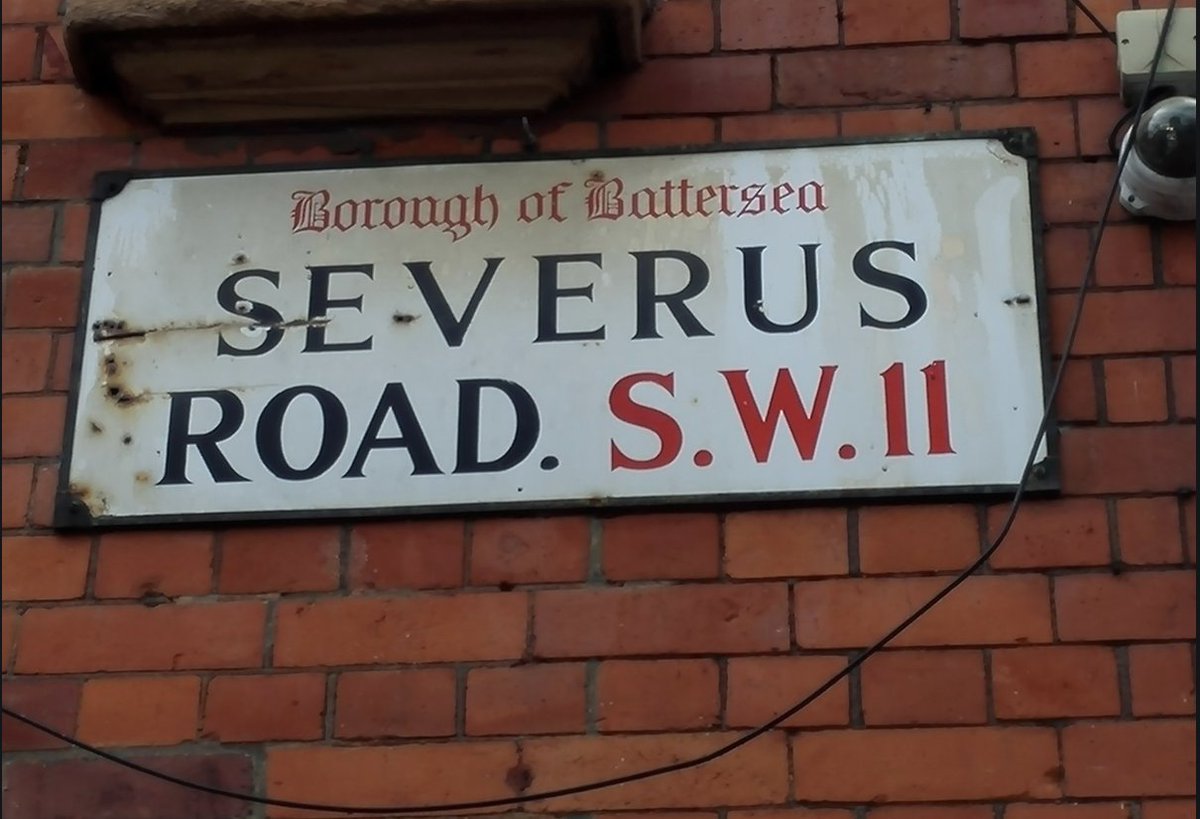