COVID Update May 21: Something is happening in the world that we should pay attention to.

Sadly we are ignoring it and the many warnings it represents. 1/

Finally, there is a country that may do a worse job and have a worse outcome than the US— Brazil. 2/ 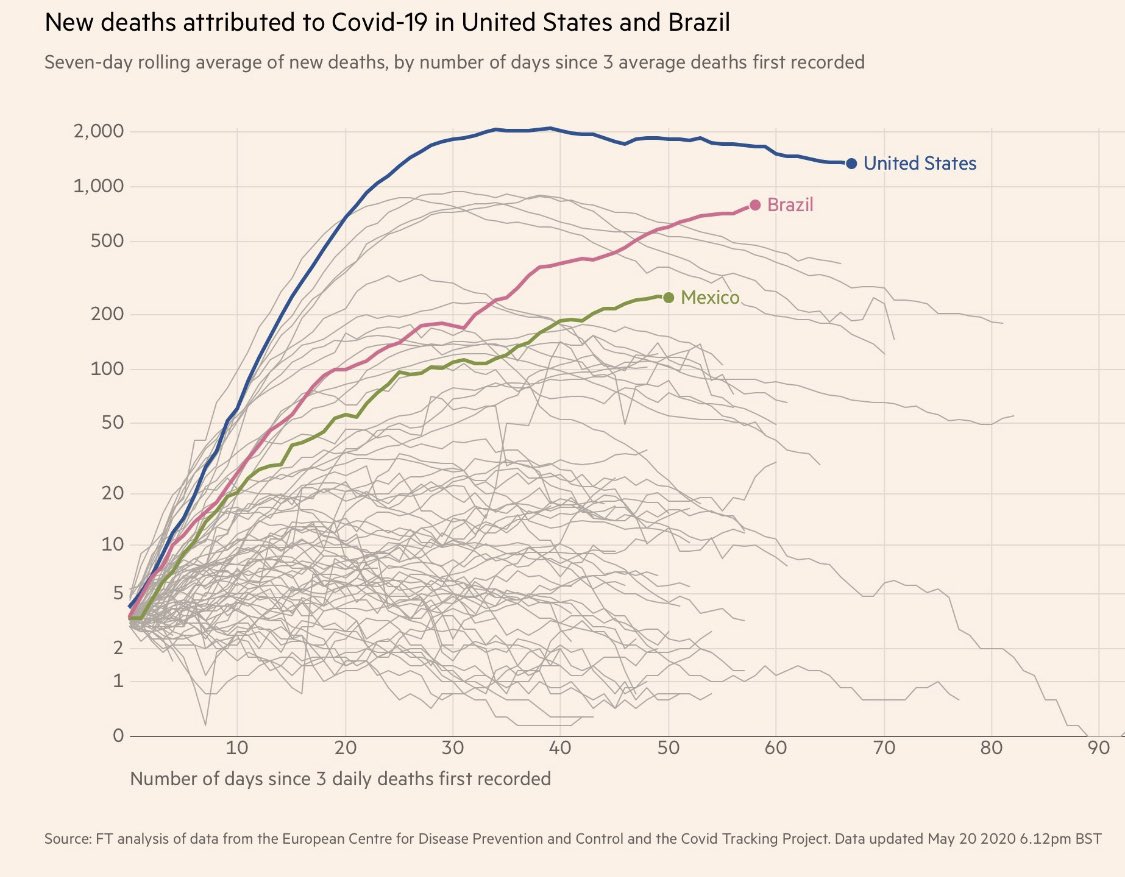 And it’s not getting better but is likely to get worse and worse. 3/

There are many parallels to the problems in the US.

In Rio, the favelas share the ingredients that nursing homes, prisons & public housing do
There are 800,000 in indeigenous communities
And Sao Paolo looks a lot like the NY epicenter 4/ 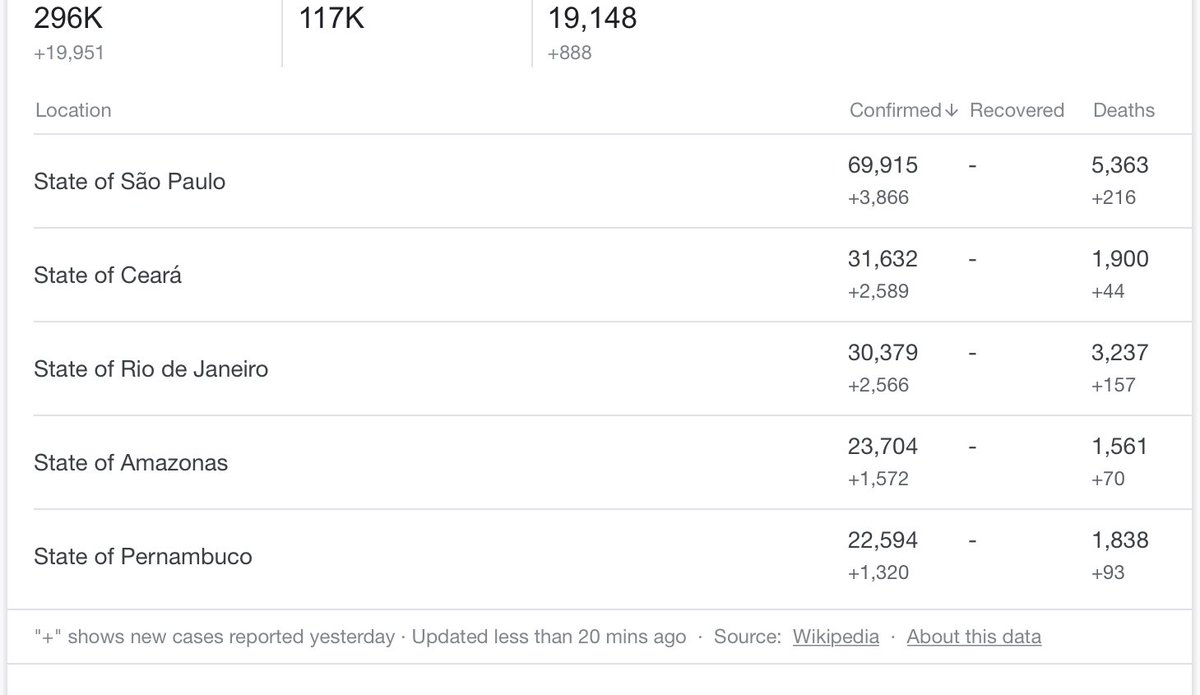 Another sad similarity is the governments indifference to those population. Brazil has the highest inequality in the world.

The wealthy fly in helicopters & have guards. They are not at risk.

And the Bolsonaro government...5/

At the end of April some cities had run out of coffins.

Bolsonaro shrugs off the Coronavirus. He calls worry over it a “neurosis.” He says “there’s nothing to be done about it.” He congregates with large crowds at the beach.6/

He’s holding large, crowded political rallies and has waged a “war” on local governors who have tried to lock down their states.

He fired his health minister for disagreeing about social distancing

He is pushing unproven drugs

It’s almost as if there’s a playbook. 7/

Bolsonaro is cementing the impression that certain leaders are more callous or indifferent (Trump, Johnson pre-COVID) than other types like Merkel or Ardern. 8/

Hear Ardern & hear Chelsea Clinton and I talk about which political leaders we have crushes on (and @somuchweirdness) on this podcast episode of #InTheBubble.

Bolsonaro didn’t make the cut for any of us. 9/

Now hospitals are 2 weeks from collapsing in Sao Paolo, the same precipice as NY and Detroit were on. 10/

Today there are 1200 deaths/day in Brazil, not quite US levels, but gaining as Brazil won’t peak until at least June.

We are so used to seeing daily death tolls in the US that we have lost all perspective on human life. 11/

One difference in Brazil from the US is half the country is not complying with social distancing standards. Not complying may not be right. Can’t be the case. 12/

Brazil is a live example of what would happen if we relaxed social distancing standards again. A new explosion. 13/

Brazil is also a lesson in what the US would look like if Trump had been allowed to continue to ignore the outbreak as he was through mid-March.

Or what a second wave could look like if he convinces half the country to drop their guard. 14/

The US reaction to Brazil like everything else has been slow. Not only aren’t we helping them, were put ourselves in danger. 15/

I’m participating in a small way on a great effort with @ONECampaign called #PassTheMic (see Julia Roberts-Anthony Fauci trading places for a hint— check out her Insta).

We’re focusing on how if someone isn’t safe, no one is safe. 16/

We think we’re insulated from the world. We think we can protect ourselves. Isolate ourselves. That’s not as easy as it sounds.

Unlike prior pandemic responses, we’ve turned our backs on the globe. This neither protects us or our leadership. 17/

Coronavirus is harder to contain in poorer countries with thinner health care systems. Haiti and Africa must be concerns. They can’t get there without help from the US or whoever chooses to lead. 18/

Those risks exist in parts of the US as well. Alabama and Arkansas are starting to see spikes now. Their ICU capacity is lower and in Alabama is at a warning level. 19/

We’re not having the summer lull in the US. We’re not exploding but the death rate isn’t materially dropping.

This is not what between waves is supposed to be like. 20/

But even if we do, what happens in Brazil means we are at risk here. Trade, travel & seasonal changes as we get to flu season don’t bode well if we haven’t gotten our act together. 21/

Trump’s declaring Coronavirus over now is virtually the same as declaring it non-existent was in February. 22/

I did several closed Congressional briefings today. At one, I was told to stop asking for investments in public health & start focusing about the economy.

Whether domestically or whether it comes ashore from abroad, we need testing, contact tracing & isolation capabilities. And vigilance. It’s tiring but we must keep doing it. 24/

The best way out of this will be to start caring about the world & our own vulnerable populations again.