Microsoft: we were wrong about open source  https://www.theverge.com/2020/5/18/21262103/microsoft-open-source-linux-history-wrong-statement … // it isn't fair to place this all on Steve. Microsoft was founded on the principle that software was intellectual property. Some of what I experienced… 1/

2/ Times were different when Microsoft started. There was no network distribution. In fact it cost money (COGS) to distribute software. But also, most all software came with expensive and proprietary (leased) hardware. If it didn't, it came w/ expensive consultants forever (IBM).

3/ Early in Microsoft's history hobbyists bought DiY hardware and thought that was all the money to spend. Software was the hobby. There was a need for a programming language (on bare metal). BASIC was created by Bill and Paul. 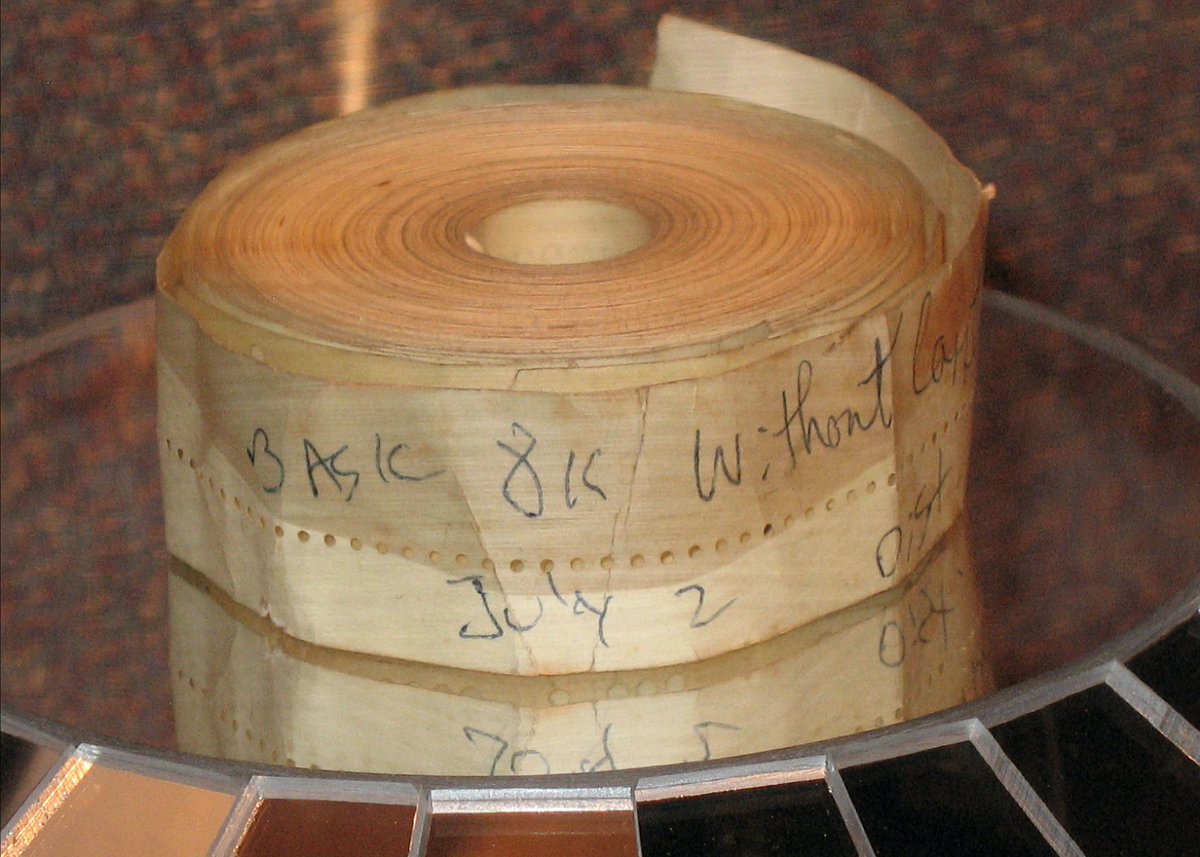 4/ Hobbyists loved it. They loved it so much they were willing to send tapes (paper tapes) around to each other for free. That's when the famous "Open Letter" was written. 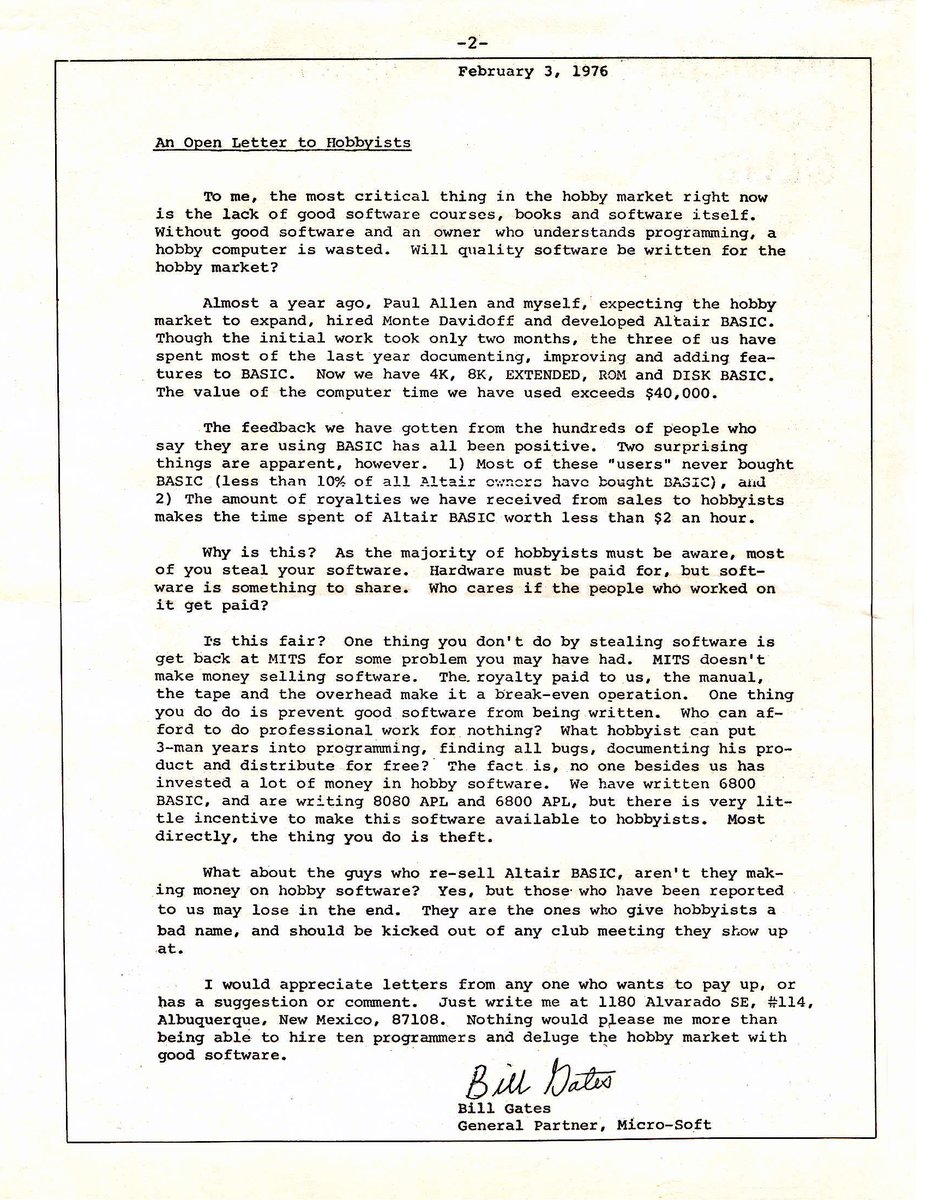 5/ Following that Microsoft essentially created the idea that software had value on its own and represented intellectual property. That's how the industry got created.

Many followed. Many expanded on an idea of IP—patents, lawsuits over user interface, and more. IBM, Apple, etc.

6/ Result, I think it is not crazy to suggest the tech industry would look very different had Bill not taken a step to establish software as a unique monetizable value layer in the ecosystem.

For years, GNU and others duplicated what was already commercial w/ different license.

7/ Free software movement started very early, around the time of the letter. Essentially the view was that if the software was so expensive people would steal it then lower the price. This was always the marginal cost logic, applied to most low marginal cost IP (music, video).

8/ When "FOSS" hit Microsoft very strongly it was Linux on the server. There were really two big issues.

First, Linux just did a bunch of stuff on the internet than WinNT did not do (and by almost all accounts still does not). It cost less to run and scaled better.

9/ To some degree, Biz customers did not focus on costs but preferred to have backing of a company to deal with. That explains the rise of enterprise Windows servers from 2000. Essentially Customers said if they were going to "install" software on "servers" they preferred to pay.

10/ During this time there was "innovation" in open source licensing as companies tried to have their cake and eat it to, so to speak. Most debates about FOSS were essentially how open it was really?

In many ways this turned out to be a side show in the biggest innovation.

11/ What really happened starting in 1999/2000 was SaaS. While there was some of that with Windows ("ASP" or "Hosted") the problem was simply that Linux worked better.

Alternatively, Windows wasn't really set up to be licensed in this way outside of a company.

12/ IBM saw this problem and under Lou Gerstner fully embraced open source. This in a sense was an easy strategy for them at the time because they were going to wrap open source in proprietary consulting as the primary revenue generator. They were not going to sell s/w per se. 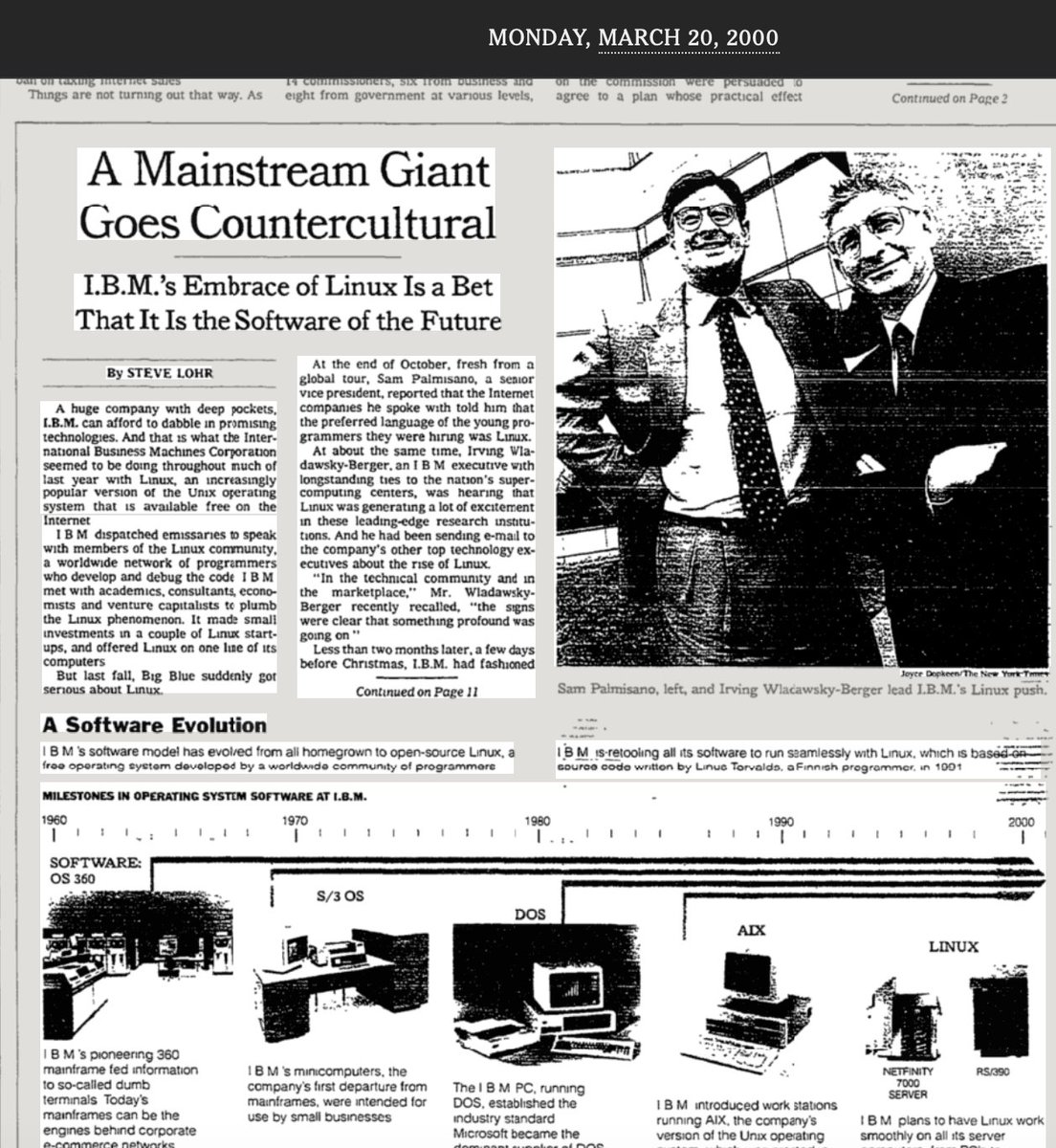 13/ Much of the challenge Microsoft faced with the hosted LAMP stack was not technical but pricing. Windows was priced per CPU or per-user (for database or Office). Much of the new ASP world was selling a service where the number of users was not the main pricing element.

14/ This was a huge balancing act because the enterprise business had become huge (imagine a 100,000 employee company where every employee was licensed for everything!)

MS software became part of "COGS" with a per-user royalty and thus not the best platform to build a company.

15/ Then came not just SaaS but companies *championing* open source by using it and contributing to projects but running everything in their own first party data centers.

In other words they never redistributed FOSS. They simply took open source, modified it, and used it.

16/ That's what upended the competitive dynamic and caught Microsoft unable to respond. Microsoft's business was based on distributing software. All the open source licenses were written to account for that. If you used the s/w and distributed then you distributed *everything*.

18/ Surprisingly (?), another company at the root node of software world, Apple, was quite adept at participating in open source while also distributing the modifications by carefully monitoring where proprietary code went. macOS/iOS are rooted in open source Mach and much more.

19/ Google of course truly pioneered a software company relationship to open source. The combination of advertising revenue and "SaaS" created an environment perfect for innovating, contributing open source, and running scaled/modified variants in their instance.

20/ Today there's a thriving model of Cos using open source the Google way or building on a project creating a Biz maintaining the OSS relationship.

But to understand a change of heart should do so in the context that created the initial view and allowed for the change. // END