NASA is hosting a post-flight readiness review press conference for SpaceX Demo-2, with: 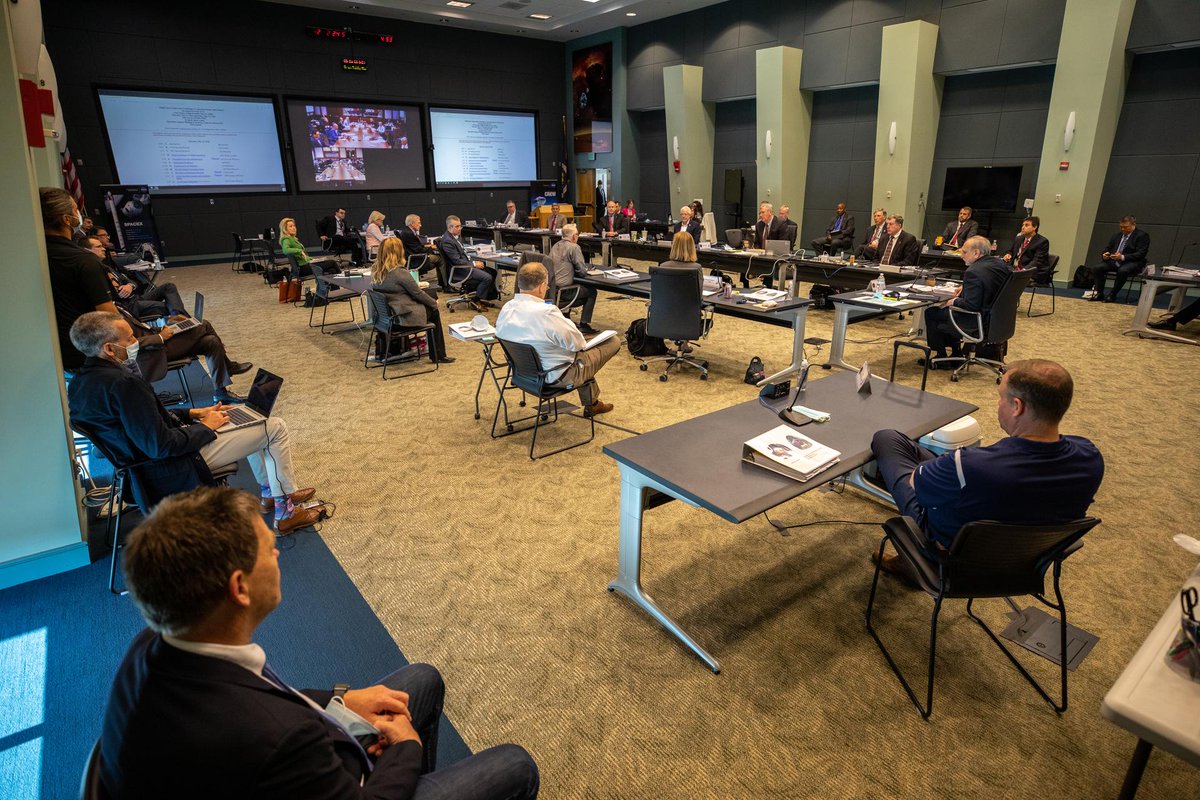 The presenters are very spread apart in the Kennedy Space Center media room, which is now empty of any chairs: 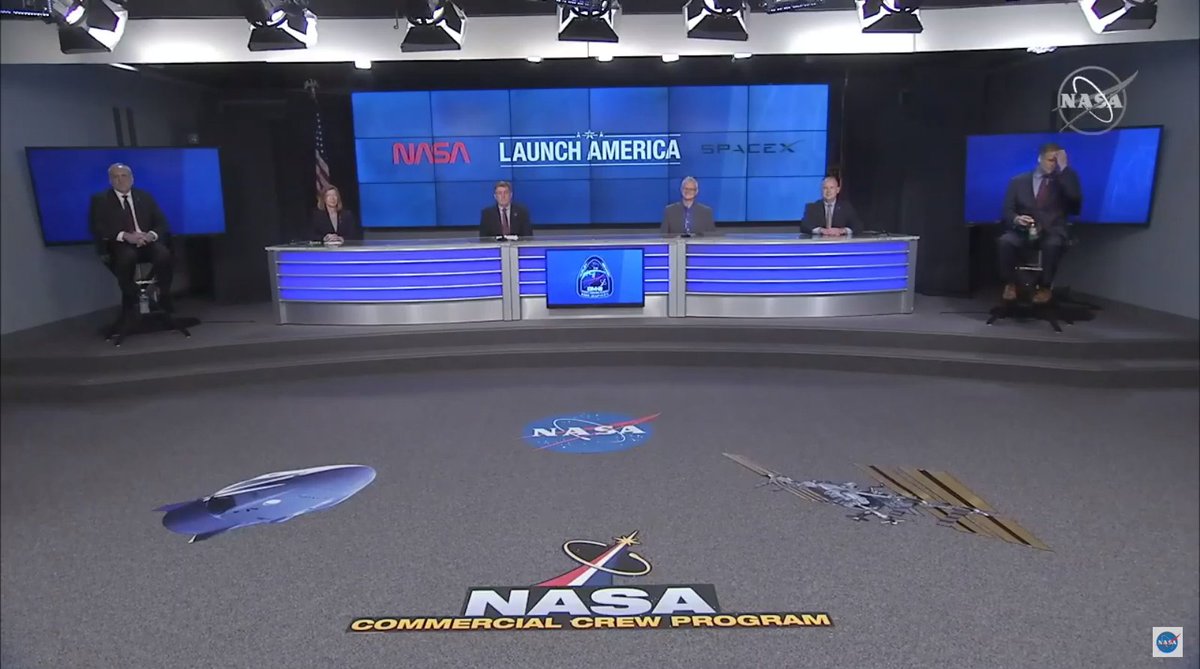 Jurczyk: It was an honor to chair the FRR ... I was humbled.

Jurczyk: "There are no significant open issues, I am happy to report" for SpaceX Demo-2.

"I am very proud of the team and the culmination of their work."

Lueders: The final launch readiness review for Demo-2 is on Monday

Reed: "The responsibility that we carry jointly with NASA ... is a sacred honor."

SpaceX needs to bring Bob and Doug "home safely back to their families – as we so often mention, they are dads."

Reed: SpaceX will static fire the Falcon 9 rocket with Crew Dragon on top in about an hour and a half.

Reed showed the following new SpaceX video of the Mark 3 parachutes that will slow Crew Dragon down on its return to Earth after Demo-2:

Knight: "This review was fantastic. We're satisfied with the discussions that were had, the thoroughness in the readiness and folks coming in and having the necessary discussions to assure that Doug and Bob are safe."

"The astronauts will get up around 8am and starting doing preparations and some briefings. They'll suit up, head to the pad, and do a practice run in preparation for SpaceX Demo-2.

I asked what the FRR means people who aren't familiar with crewed launches:

Jurczyk: "We validated that this system meets the human certifications requirements for the Demo-2 mission ... today's review in the interim went a long way toward certifying the system for flight."

.@marinakoren: Were international partners involved in the Demo-2 FRR?

Shireman: Yes, both Russian and Japanese representative were a part of the FRR.

.@StephenClark1: What is the loss in crew requirement for Demo-2?

Lueders: We met the 1 in 270 odds of loss in crew requirement successfully.

.@SciGuySpace: After losing the Demo-1 capsule during post-flight testing, did you think Demo-2 would happen a year later?

Lueders: "Don't ever underestimate the value of a failure ... you can never sell this NASA and SpaceX team short, and they've accomplished miracles for me."

.@TimFernholz: How much has SpaceX contributed financially to development?

Reed: "I can't give you the exact dollar amount ... but I can tell you absolutely that SpaceX invested heavily into this partnership."

.@lorengrush: What are the possible abort scenarios for Demo-2?

Reed: The SuperDraco abort system "is really available almost the entire time. One of the goals of this system is to not have any blackout periods, where the system doesn't function."

"There's 50 points where we're monitoring weather," from Florida all the way up the Eastern U.S. seaboard and over to Ireland.

.@EmreKelly: During the Demo-2 FRR, were there any questions that led to some notable longer discussions?

Jurczyk: There were 2 other technical special topics, the titanium compatibility issue after Demo-1 and a performance shortfall on the fire suppression system.

.@jeff_foust: What open work needs to be done between now and the launch readiness review on Monday?

Lueders: Final check out on the spacecraft, the rocket static fire ... "dotting the i's and crossing the t's is the kind of open work we're talking about."

.@jackiewattles, to Jurczyk: With Doug Loverro leaving NASA this week, did you have to do any extra prep to review Demo-2?

Jurczyk: "I've been conducting agency reviews of the Commercial Crew program for the last 2 years."

.@joroulette: Will Demo-2 data inform Starship development and would Starship ever do a test flight like this one to the ISS?

Reed: "Absolutely, data is data ... we want to learn from everything we do and apply it wherever we can."