This is too tempting. Here I go.

"Law and order" says the guy who won't show anyone his taxes.

"Law and order" says the guy whose "charity" was a shell company for "persistently illegal conduct” and “repeated and willful self-dealing transactions.”
https://ag.ny.gov/sites/default/files/court_stamped_petition.pdf …
1/

"Law and order" says the guy who paid $2 Million to 8 Charities for Misuse of his "foundation", and whose kids had to pass a course to learn why they shouldn't cheat people.

"law and order" says the guy whose personal lawyer, Michael Cohen, is in prison, and who testified, under oath, that he committed campaign finance violations under orders from Trump.

"Law and order," says the guy who, according to reporting by the New York Times, engaged in suspect tax schemes.

To demonstrate his innocence, Trump made his financial records available, like every other president before him.

"Law and Order," says the guy whose personal lawyer testified before Congress that he engaged in multiple instances of fraud, like the time he wanted to make sure his portrait sold for a lot of money, so he had Cohen hire a fake bidder to purchase the portrait for $60K.

"Law and Order" says the guy who obstructed justice in plain sight on multiple occasions, like when he instructed witnesses not to talk.
https://www.nytimes.com/2019/12/04/us/politics/turley-impeachment.html …

Because that's the kind of thing innocent people do [sarcasm]

I need some helpers with this or I'll be here all day.

🎶Is there world enough and time
For us to list all of Trump's crimes?🎶

[I just wrote a song]

"Law and Order" says the guy who operated a sham university.

"Law and Order" says the guy who got rich selling real estate to Russian criminals who stole their money from the Russian people.

The word for that is "money laundering."

"Law and Order" says the guy who engages in witness tampering and asks people to lie for him.

Remember when Hope Hicks said she was asked to lie for Trump?

"Law and order" says the guy who told Hicks and Bannon to refuse to answer question from Congress.

(Bannon said he was acting on orders from the White House.)

"Law and order" says the guy who engages in insider trading.

Here's reporting that Trump tipped off a billionaire friend that he would be raising tariffs on steel; his friend dropped his stocks and thus saved himself boatloads of money.
https://thinkprogress.org/trump-ichan-steel-imports-cf7deb8beaf0/ …

"Law and Order" says the guy who said the military should deal with terrorists by taking out their families.

This would be a war crime.

"Law and Order" says the guy who violates the Hatch Act regularly.

The Hatch Act prohibits federal employees to use their titles to promote partisan politics.

I could fill a thread with Hatch Act violations.

But life is short.

"Law and Order" says the guy who makes a mockery of 5 CFR § 2635.502, requiring federal employees to make sure their private business matters do not affect his impartiality when carrying out official duties.

How did Kushner get those loans?
https://www.nytimes.com/2018/02/28/business/jared-kushner-apollo-citigroup-loans.html …

But who has all that time?

"Law and Order" says the guy who regularly threatens people.

I should have called this thread "Fun with Criminal Law"

If you missed quotation from Tweet #3 is here ⤵️
Yes, Trump said, "Our laws are so corrupt and stupid."

It means he should be able to put anyone he doesn't like in jail.

"Law and Order" says the guy who threatened the whistleblower.

(Forgot about that one. Thanks, Mark)

Attached a snippet from the Impeachment Report to Accompany H. Res. 775.

"Law and Order," says the president who violated the Impound Control Act.

Contempt of Congress is a separate law.

(Who know a president could violate so many!)

Michael Stern writing for @just_security did a thorough job explaining this one:
https://www.justsecurity.org/67738/federal-criminal-offenses-and-the-impeachment-of-donald-j-trump/#ContemptofCongress …

"Law and Order," says the United States President, who threatened the life of a United States Ambassador because she wouldn't stand by while he extorted an ally for his own personal gain.

I notice that sometimes when I include someone else's tweet, the whole thing disappears. Maybe when I do this, I should also include a screenshot.

So many of the comments are wonderful. I 💕you all

Will attach a screenshot of #17 in the next tweet.

If Trump tries to present himself as the Law and Order candidate, the appropriate reaction is 😂 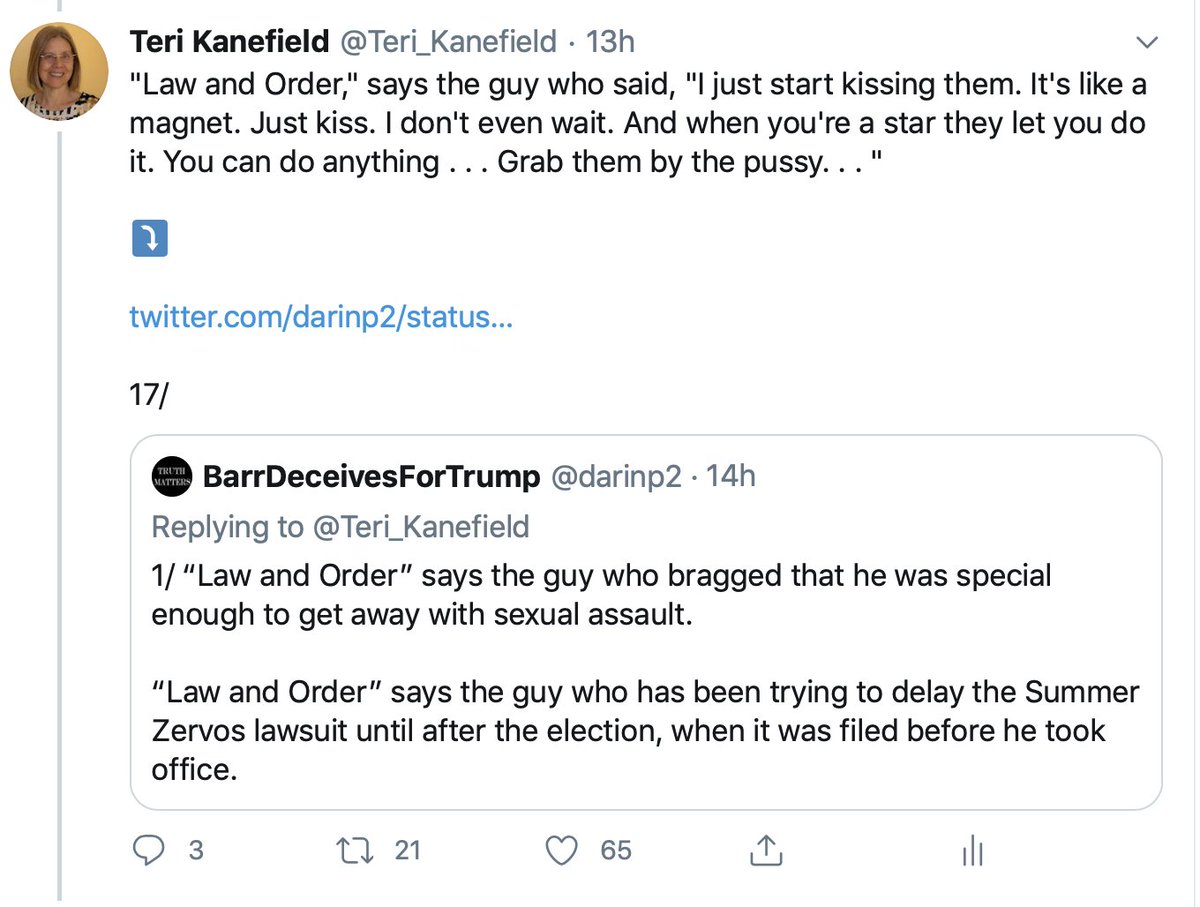 23/ Does this thread need to be a song? Or a political ad? Or party game: When it's your turn, you find a new ending to the sentence beginning, "Law and Order," says the guy who . . .

25/ "Law and Order" says the president who stands by while peaceful protesters and members of the clergy are teargassed and brutalized so that he can get a phony photo op.

This may be the defining moment of the Trump presidency.

This thread is now a blog post here:  https://terikanefield-blog.com/law-and-order-said-the-guy-who/ …