NEW: much has been made this week of Spain recording zero new Covid deaths for two successive days.

Spanish Prime Minister Pedro Sanchéz called it "A success for all".

This was widely reported as zero new deaths for two days in a row, and indeed that line was trumpeted by the Prime Minister

2/ But if you look at the Spanish govt’s daily data releases, you’ll spot a new footnote that appeared around a week ago:  https://www.mscbs.gob.es/profesionales/saludPublica/ccayes/alertasActual/nCov-China/documentos/Actualizacion_125_COVID-19.pdf …

3/ So Spain is only adding deaths that took place the day before the report is published (!)

Given how long it takes deaths to be registered, especially in a system with autonomous regions, this is absurd.

4/ And what’s more, they don’t go back later on and say "okay some more deaths have been processed from earlier in the week, let’s add those to the total".

They just ... don’t add those deaths in.

5/ e.g on Mon & Tues when Spain was celebrating zero deaths, Madrid actually recorded 11 and then 12 new deaths, but since they hadn’t occurred the day before the report, they were ignored:  https://www.abc.es/sociedad/abci-simon-admite-datos-sobre-numero-fallecidos-esta-dando-problemas-202006021827_noticia.html …

They still haven’t been added to the cumulative total.

6/ The situation is nothing short of ridiculous, and these ... incredible ... zero deaths figures come at a critical time when Spain is coming out of lockdown.

As @JVLazarus told me, "The figures are driving us crazy" and "causing a false sense of security among the population."

7/ To be clear, this is what Spain’s data for daily deaths looks like over the last week or so 🤔🤔🤔🤔

Guess when they introduced the counting method change... 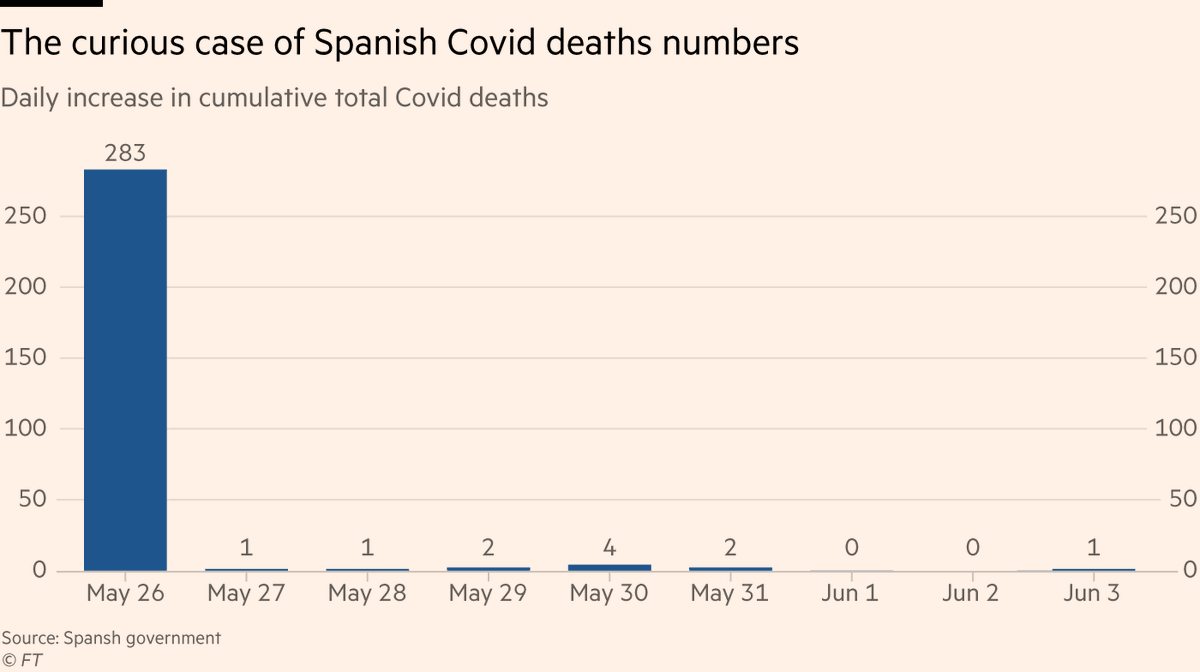 8/ Now, it’s not as though other countries haven’t done 🤔🤔 things with Covid deaths data.

9/ To give an idea of what Spain’s "method" does: if England adopted the same approach, yesterday NHS would have reported 20 new deaths, not 179. A nice little reduction of 90%.

England would have reported deaths in the teens and 20s all week. 152 for the week, instead of 995.

10/ Now, nobody is suggesting Spain is secretly seeing hundreds of deaths per day. Its numbers were lower than the UK’s last time we could trust them, and were trending down.

But we don’t know what the true number is. We have no idea.

11/ Spain says it will fully revise its total once a week to include the deaths it’s ignoring on a daily basis, but a) this will give us a new type of number that no other country is publishing, making comparability impossible, and b) it makes Spain’s own historical data useless.

12/ We cannot say this is a deliberate move by the government to massage the figures downwards at a critical time, but we do know two things:
• Government health officials know the problem with the daily numbers
• The government has loudly hailed zero deaths as a success

14/13 End note: everyone should follow @kikollan, who has been tirelessly reporting on the mess that is Spanish Covid data for weeks now (and does consistently great work on other topics too).