Pulp Librarian+ Your Authors @PulpLibrarian Curator of the art, history and fiction of old dreams. Jun. 05, 2020 4 min read + Your Authors

Cambodia has a rich modern history of pulp art, #comics and graphic novels. Today in pulp I look at the Cambodian scene and at some of the artists who made - and continue to make - it happen! #FridayMotivation 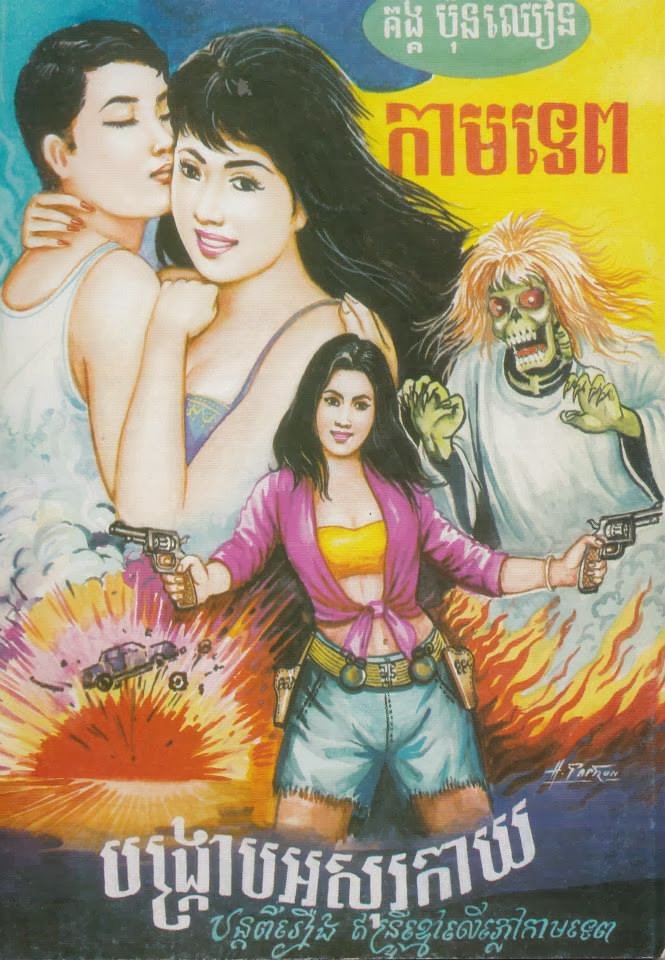 Cambodian pulp art was initially influenced by the French comic strip style, and later by Indian movie posters and hindi comics. But it also maintains a strong folk-art tradition, melded with contemporary themes. 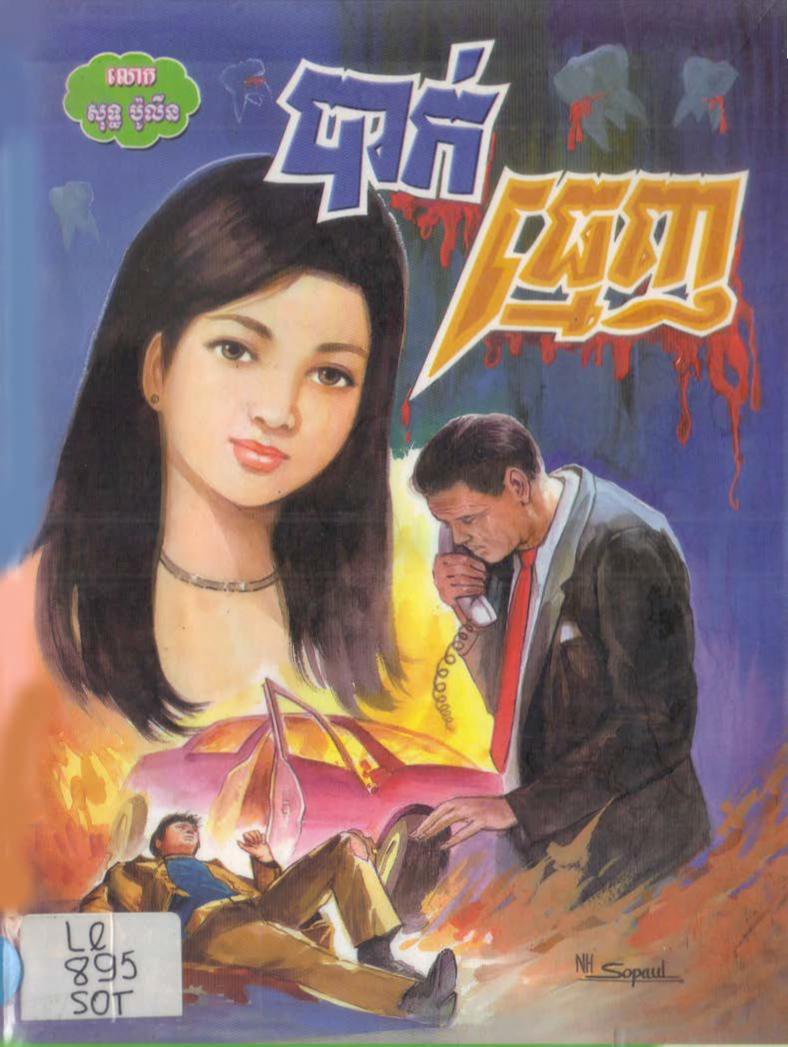 In the 1960s Cambodian artists were able to make a reasonable living illustrating both comics and book covers for the domestic market. Flower Of Love, Flame Of Suffering by Hak Chay Hok (Khmer Books) is a good example of the genre. The cover is by Hul Sophon. 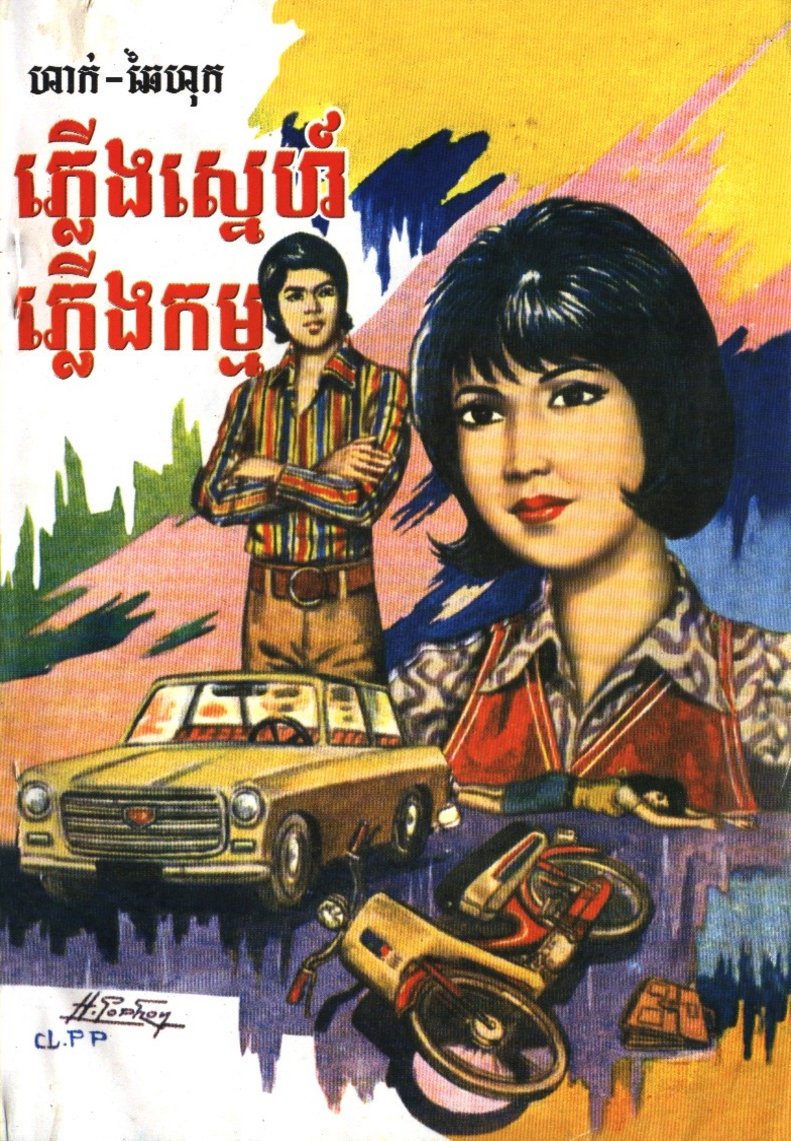 Hul Sophon began drawing at the age of 13, before studying at the Lycee Suriyavong. He began his art career in 1963 working on book covers and comics in Phnom Pehn. This is his 1973 cover for Crying From Remorse, by Sor Sornose. 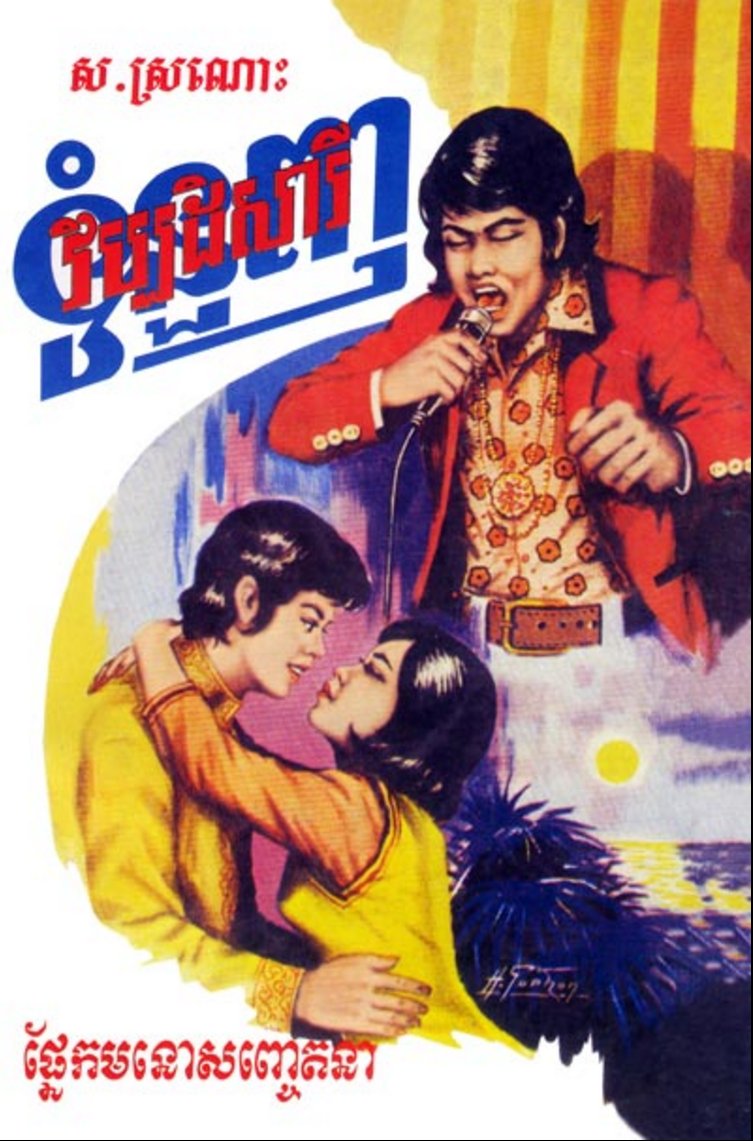 Hul Sophon also worked on detective and mystery novels in the 1960s, bringing a distinctly Cambodian noir style to crime dramas such as Betraying Husbands For Money, by Srey Bun Chantah. 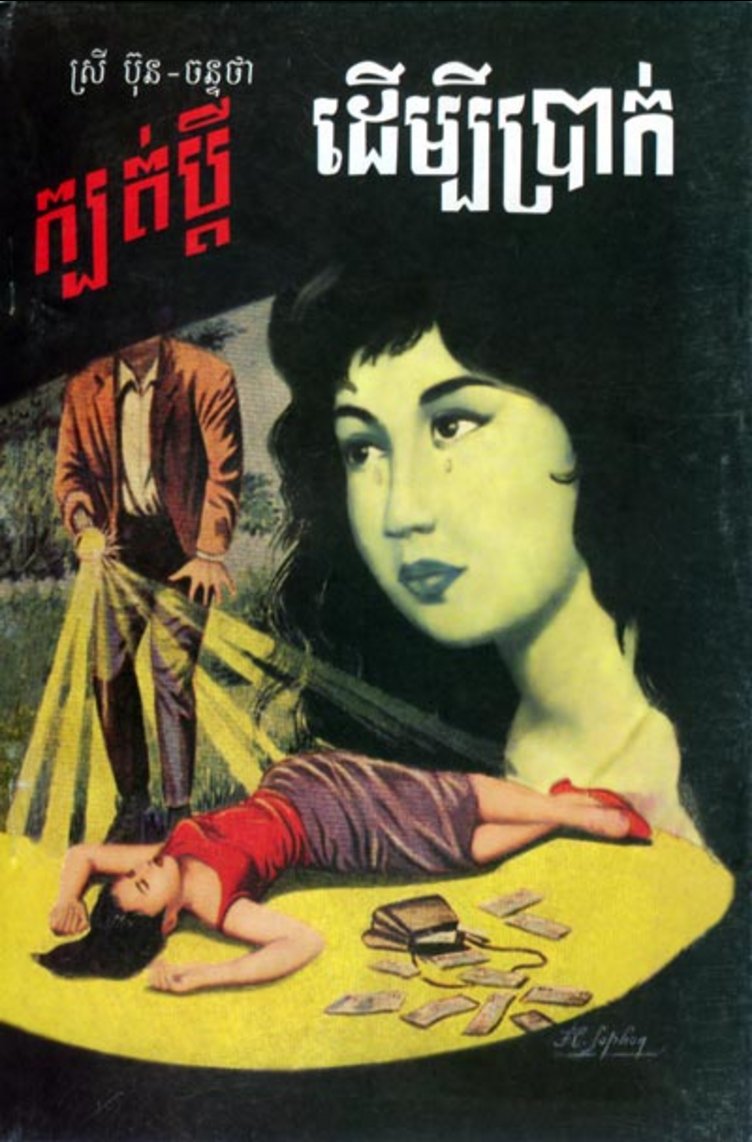 Uth Roeun possibly created the first Cambodian comic book in 1963: he certainly was a widely admired artist throughout the 1960s and early 70s, illustrating books as well as comics. Stormy Mind Of A Young Girl, by Penn Vanthun (1970) is a great example of his style. 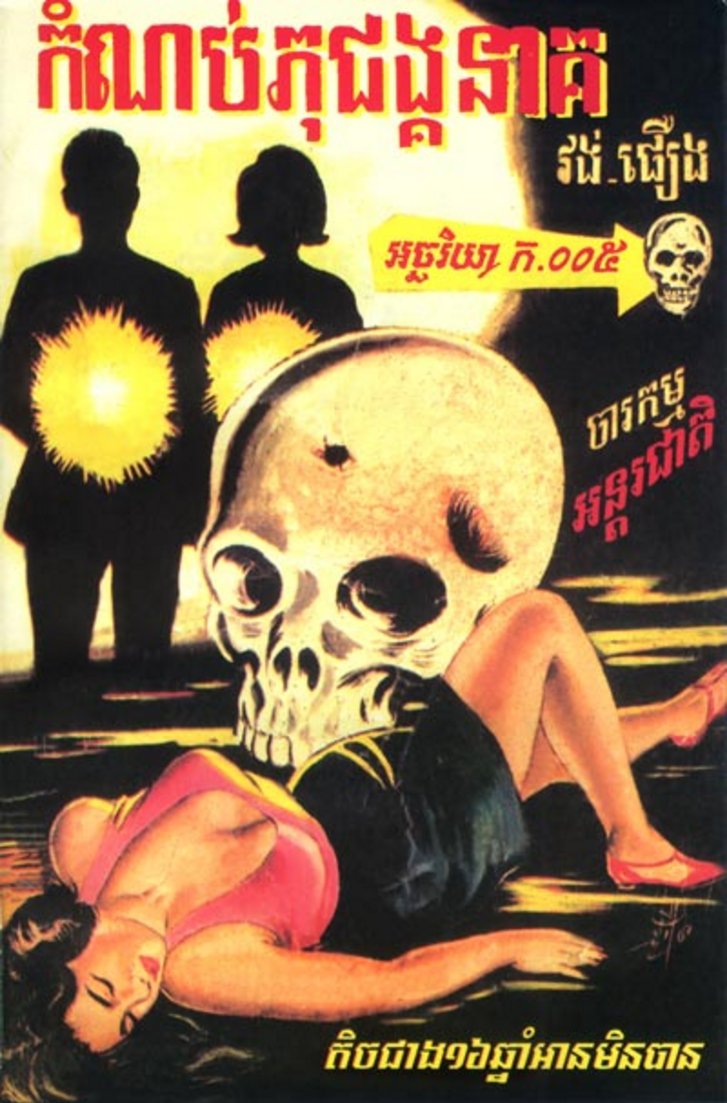 Uth Roeun's style was influenced by French comic strips, but it was his arrest in 1964 for his second comic Preah Thuong Neang - about tolerance for the Muslim minority in Cambodia - that made him leave his studies behind and concentrate on illustration. 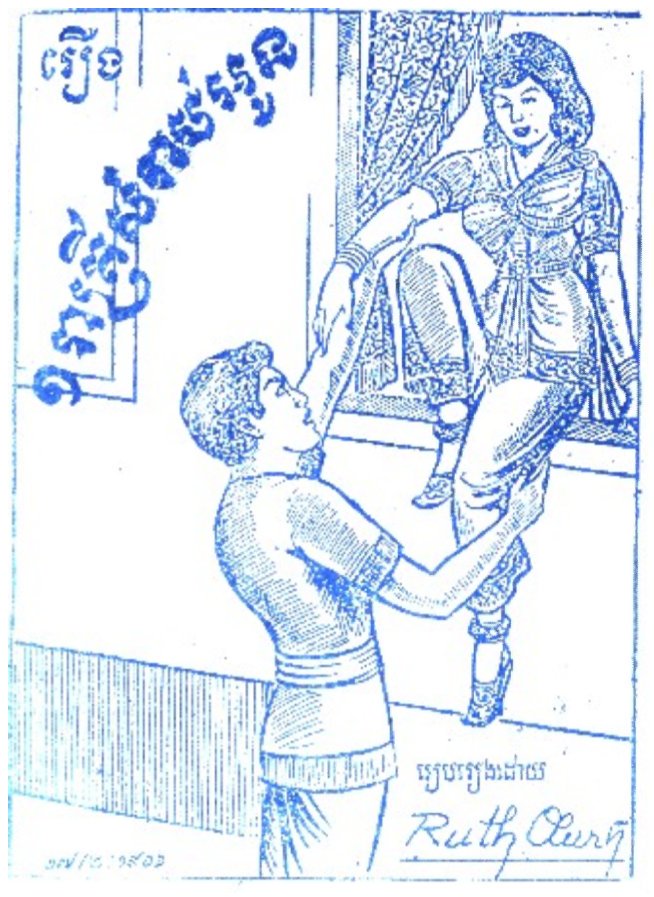 Uth Roeun is probably best known for his recent illustrated version of the classic tale Tum Teav, an 18th century romantic poem about a novice Buddhist monk and a beautiful young girl. The story is taught in most Cambodian schools. 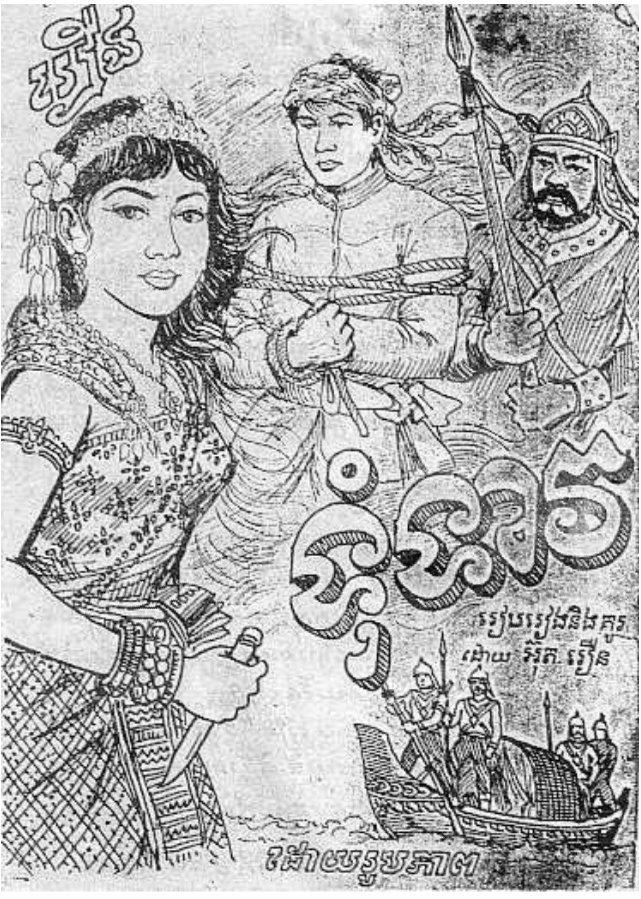 During the time of the Khmer Rouge most book publishing was stopped and pre-revolutionary books and comics were often destroyed. Artists were punished or killed; Uth Roeun survived because he could draw construction plans for the regime. 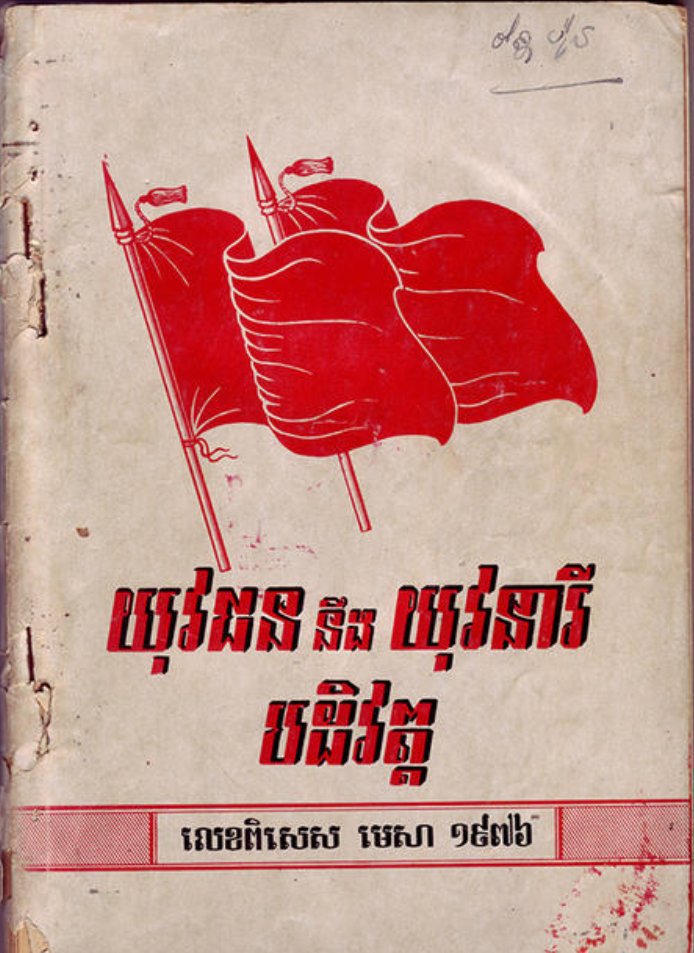 Following the Vietnamese invasion of Cambodia in 1979 'the Socialist Decade' slowly saw book and comic publication begin again. However with few resources and lower literacy rates following the Pol Pot years it took a great effort to restart the industry. 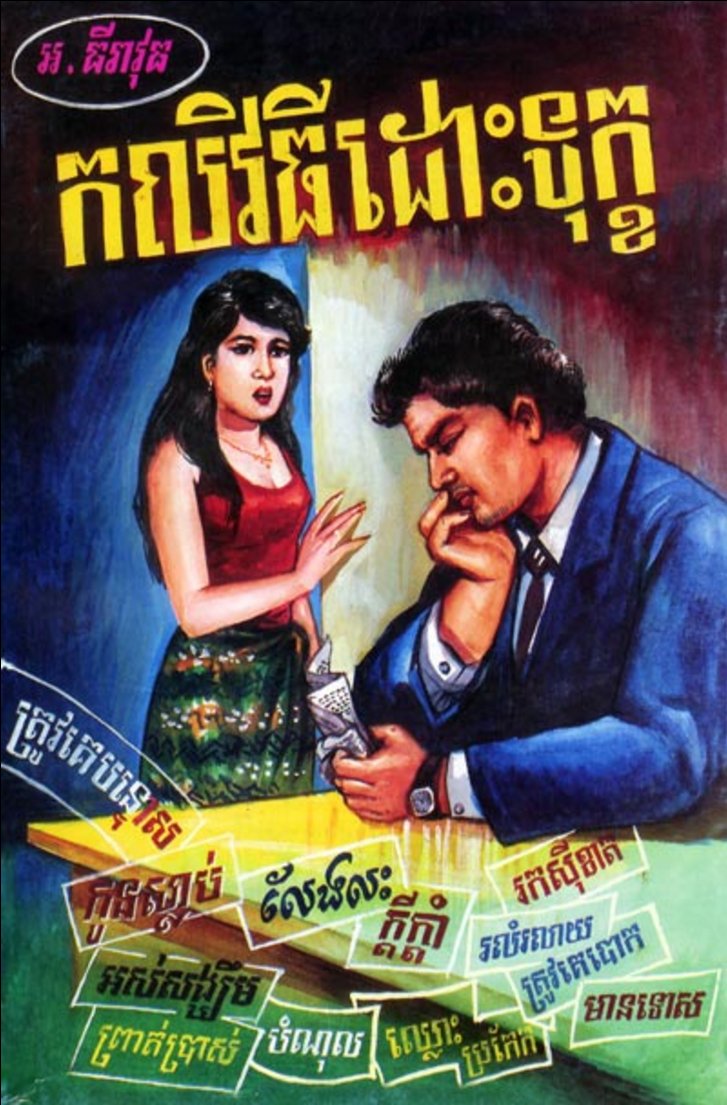 Sin Yang Phirum started writing and illustrating Cambodian comics in 1985. Her work took a critical view of the social issues affecting women during the Socialist Decade; family, friends, work. As these were comics rather than novels they could slip past the state censors. 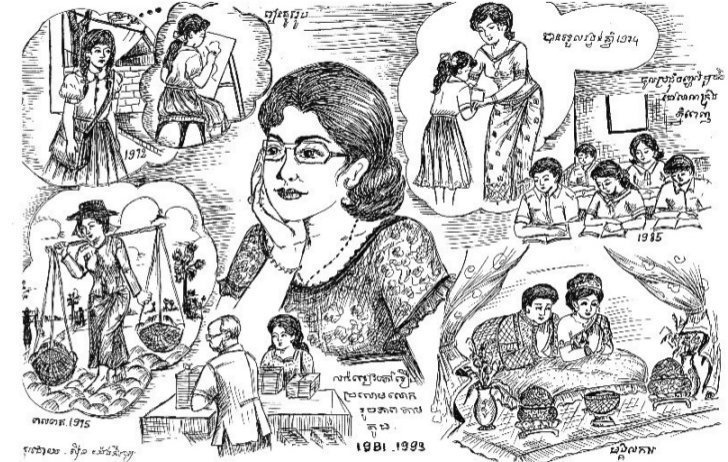 Sin Yang Phirum was a pioneer for women illustrators in modern Cambodia, but she stopped drawing in 1992 to do other work and raise a family. Creating comics often doesn't pay enough to make a living: many Cambodian illustrators work other jobs to make ends meet. 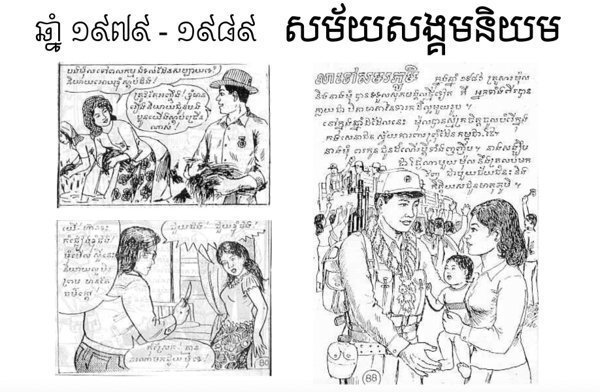 Im Sokha began drawing comics in the 1980s, initially inspired by Indian movie posters. Known for his speed he could complete an entire comic in just a few days. His graphic horror novel Romance Of The Tiger Lady is probably his best known work. 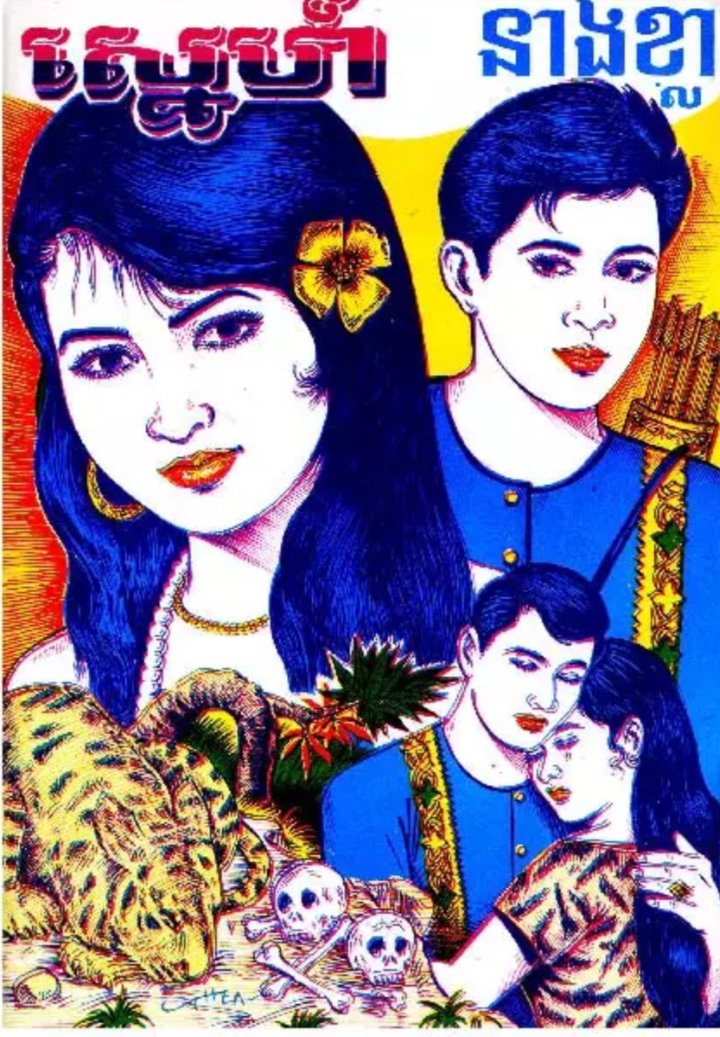 Em Satya is better known as Nono, the political cartoonist for Rasmei Kampuchea. However he has been working on Cambodian comic since the 1960s. He's noted for his 'clear line' drawing style; his graphic novel Flower Of Battambang has been published in both Khmer and English. 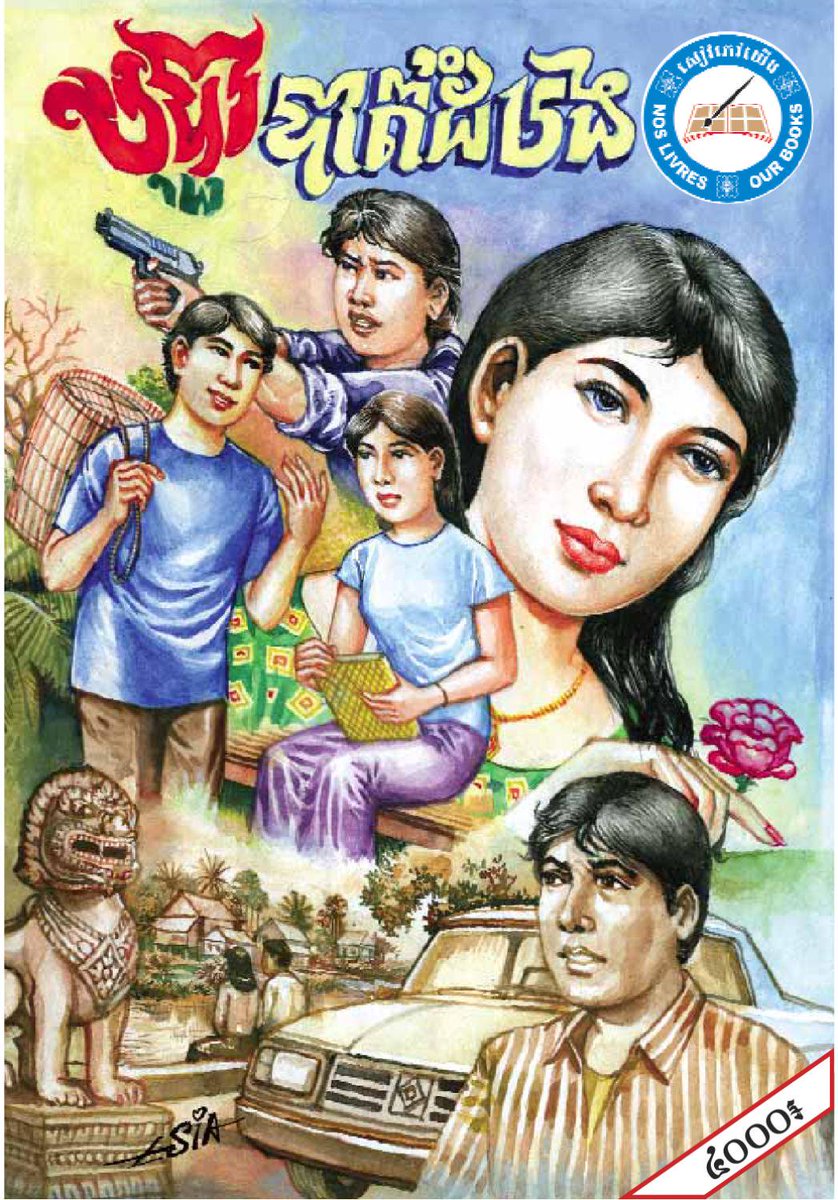 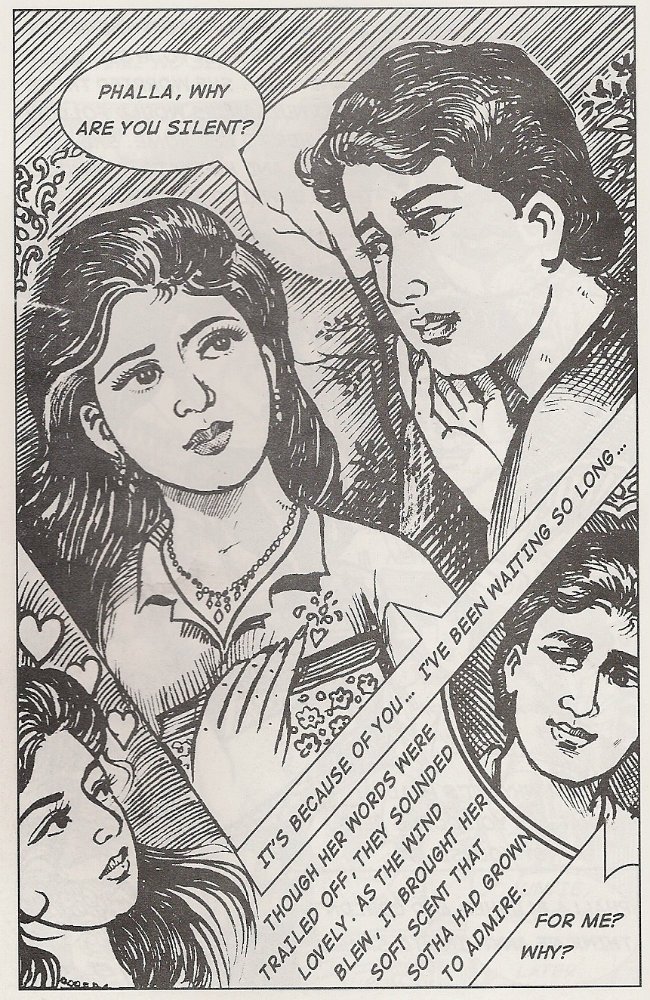 Many Cambodian illustrators work with NGOs to develop educational comics and to discuss social issues. Sao Sreymao is one of the new generation of artists working in this field: her illustrations on youth issues have also been used in the Phnom Penh Post. 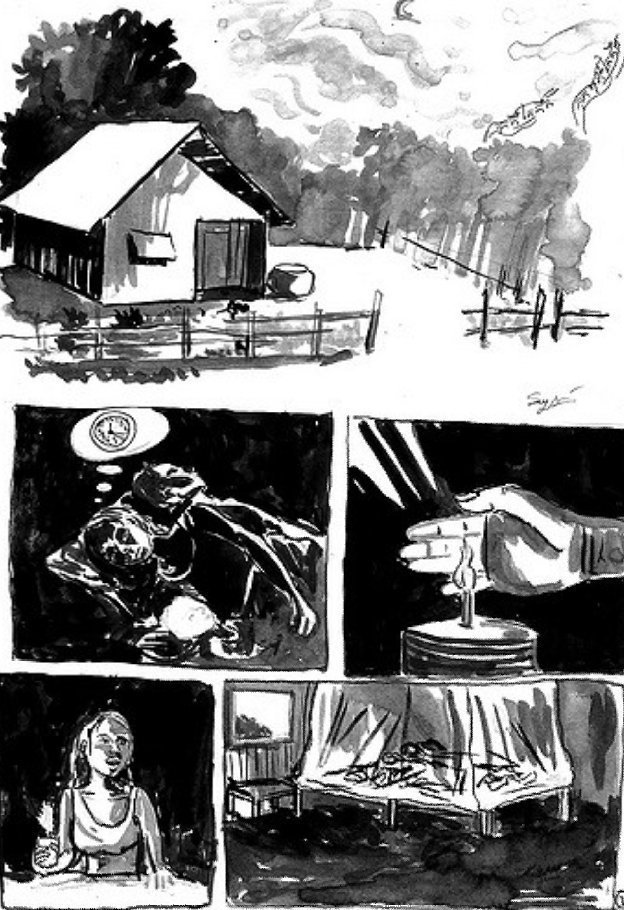 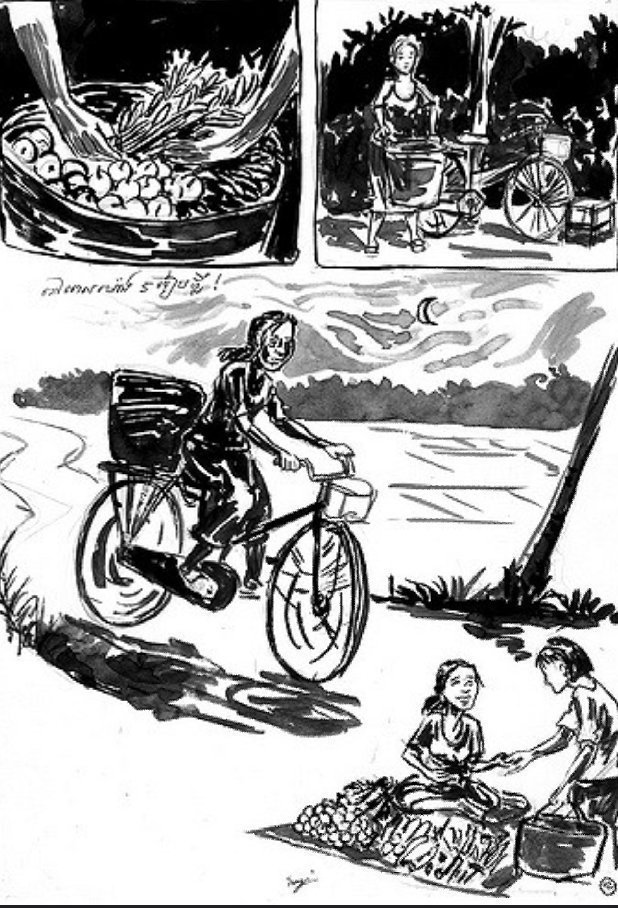 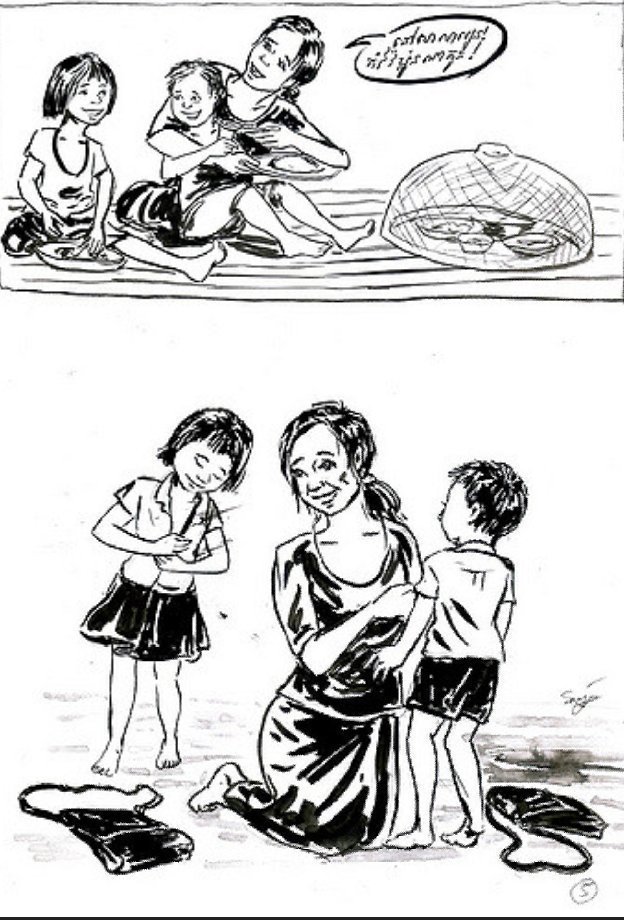 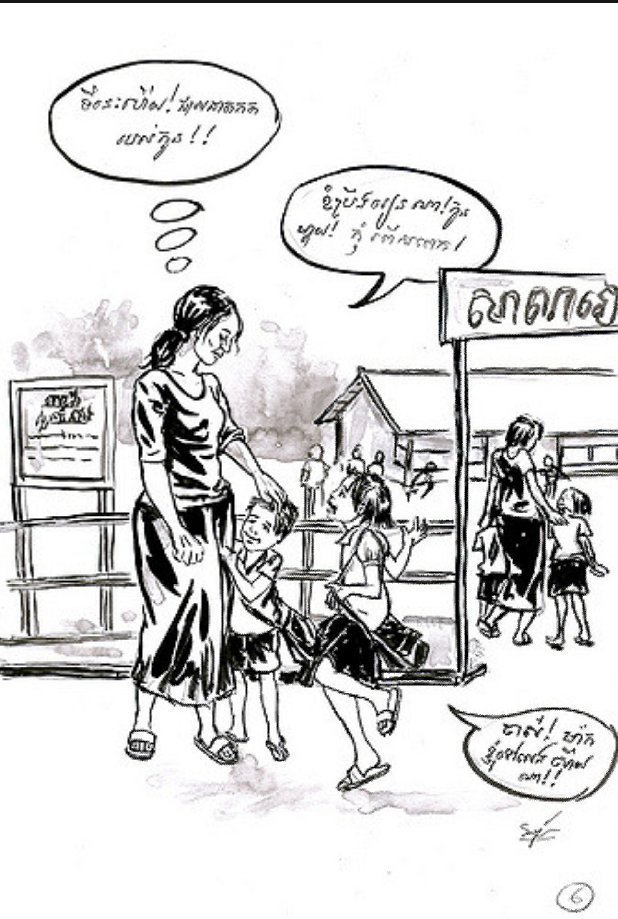 New illustrators continue to expand the Cambodian arts scene. V.J. Joson is a Filipino-born artist now working in Cambodia. As well as paintings and drawings she also works in comic format. 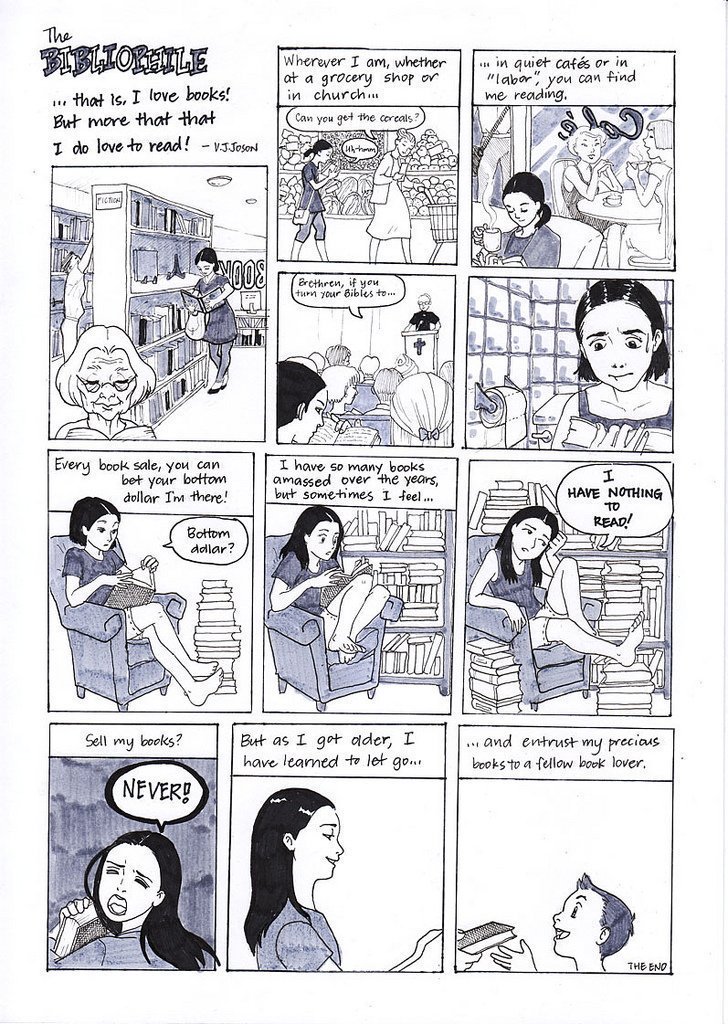 A number of Cambodian artists also work overseas. Será is one of the most dynamic graphic artists in France: he was born in Phnom Penh in 1961 and left Cambodia as the Khmer Rouge took over. His graphic novel 'Bitter Cucumbers' looks back at that time. 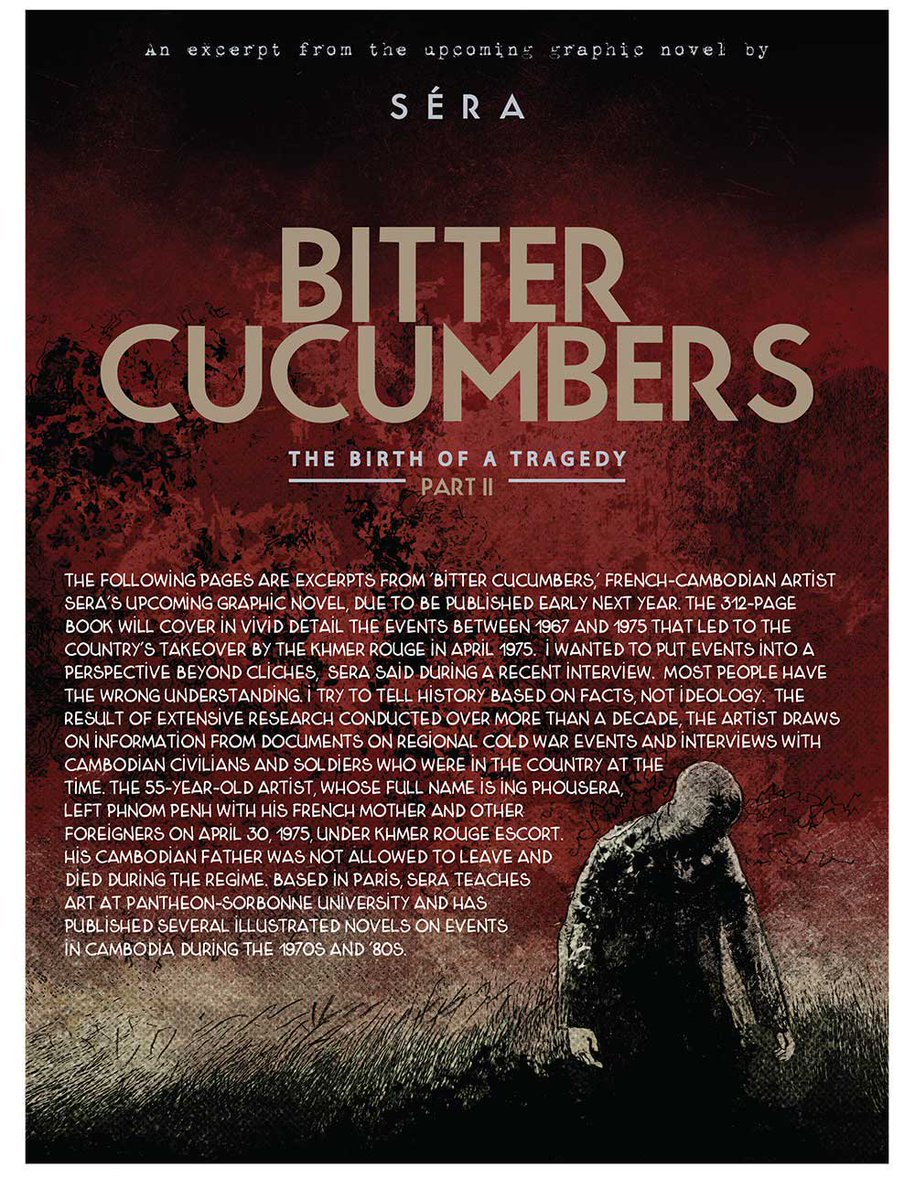 Our Books Cambodia is one of the NGOs helping to develop and publish new Cambodian comic book artists. It runs exhibitions, workshops and competitions. Their website has links to a number of Khmer comic resources:  http://siewphewyeung.org.kh/links/ 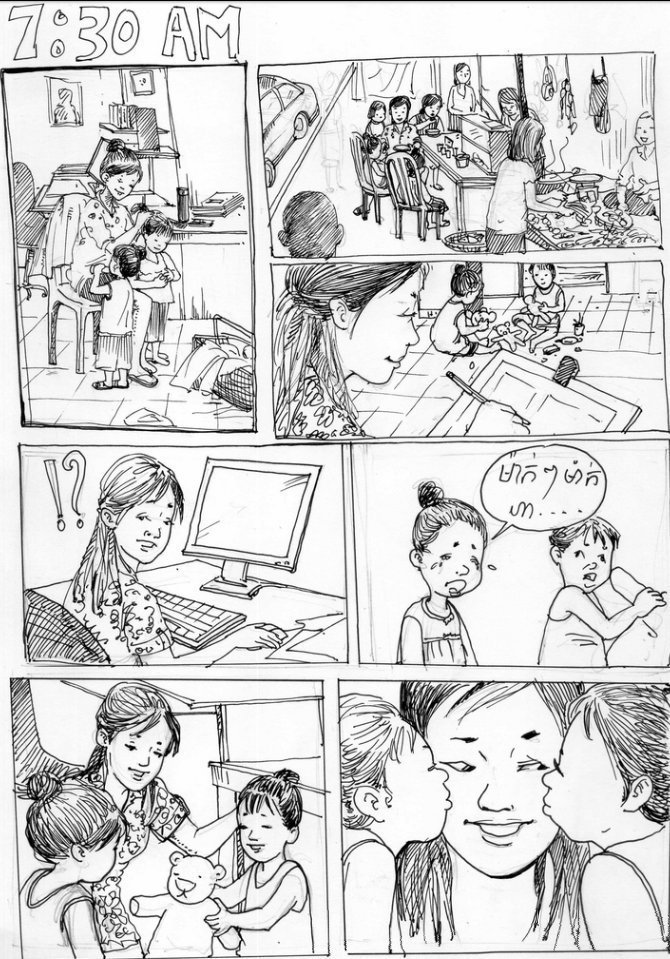 The market for original Khmer language comics remains tight in Cambodia: poor copyright enforcement plus competition from Western comics and online entertainment means times are challenging. However a new generation of illustrators is still keeping the flame burning. 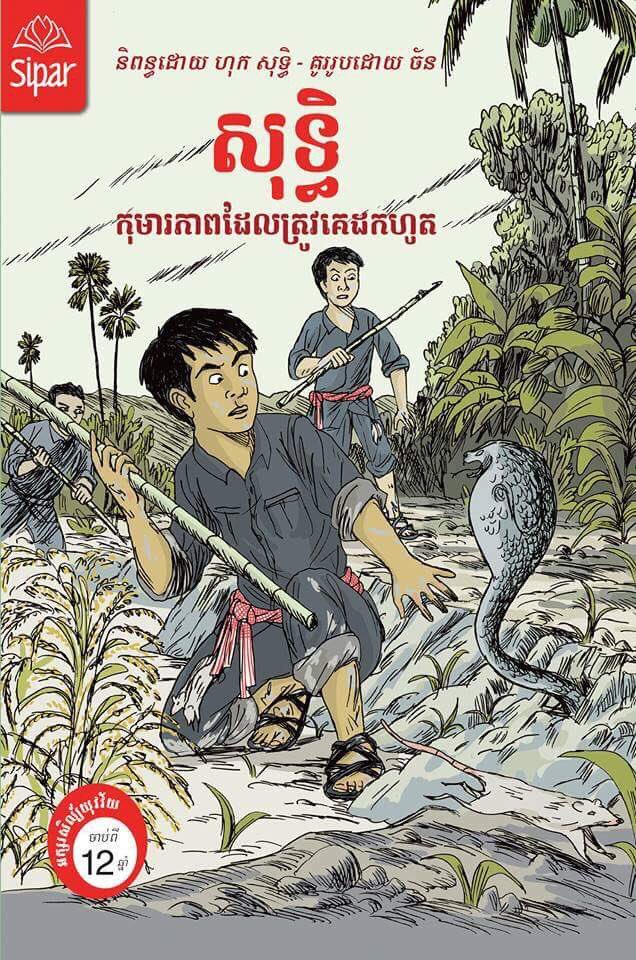 And that's it for my brief look at the modern Cambodian illustration scene. Do try and check out some of the titles at the eLibrary of Cambodia:  http://www.elibraryofcambodia.org  - I think you'll enjoy them! 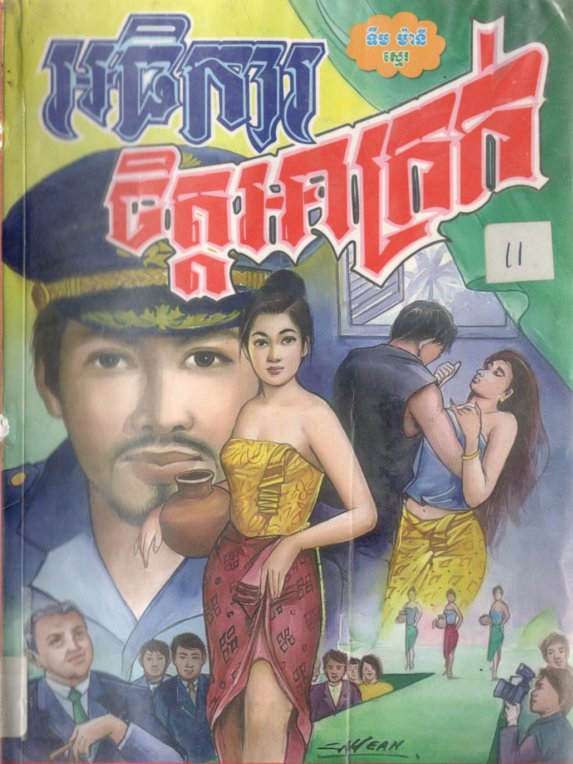 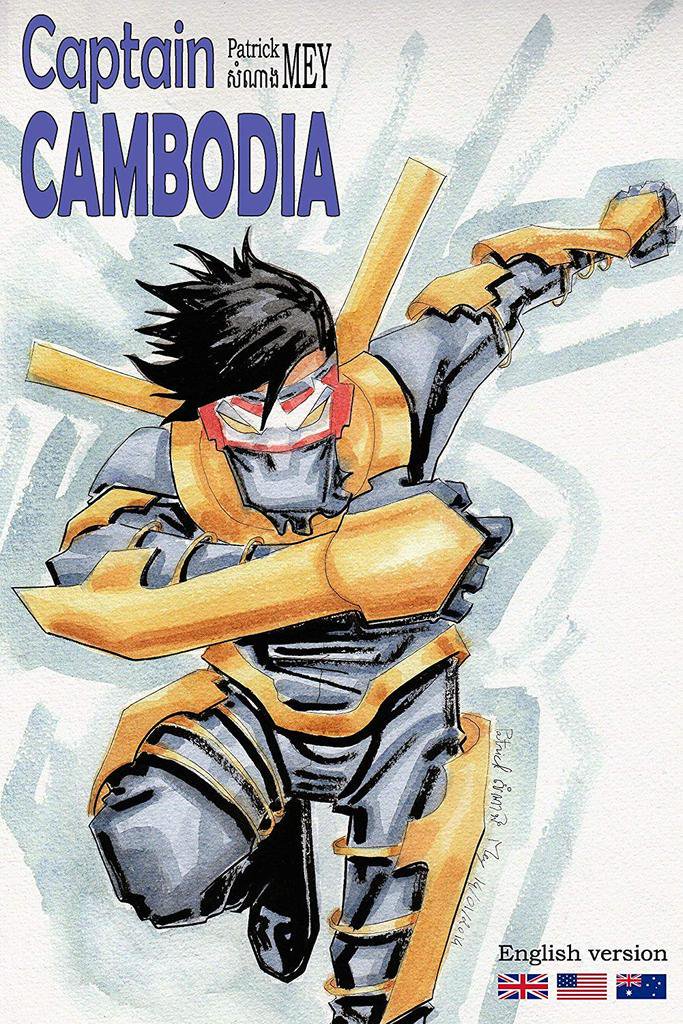