NEW: The WHO made a surprising announcement that asymptomatic people w COVID rarely spread it.

I’ve talked to 4 reputable scientists, the White House, and the WHO.

I believe this was an irresponsible statement even though it was based on legitimate observations. Thread here.1/

First, here is coverage of the WHO announcement.

My conversation with WHO— after the conversation I asked them to put into email what they are comfortable sharing. 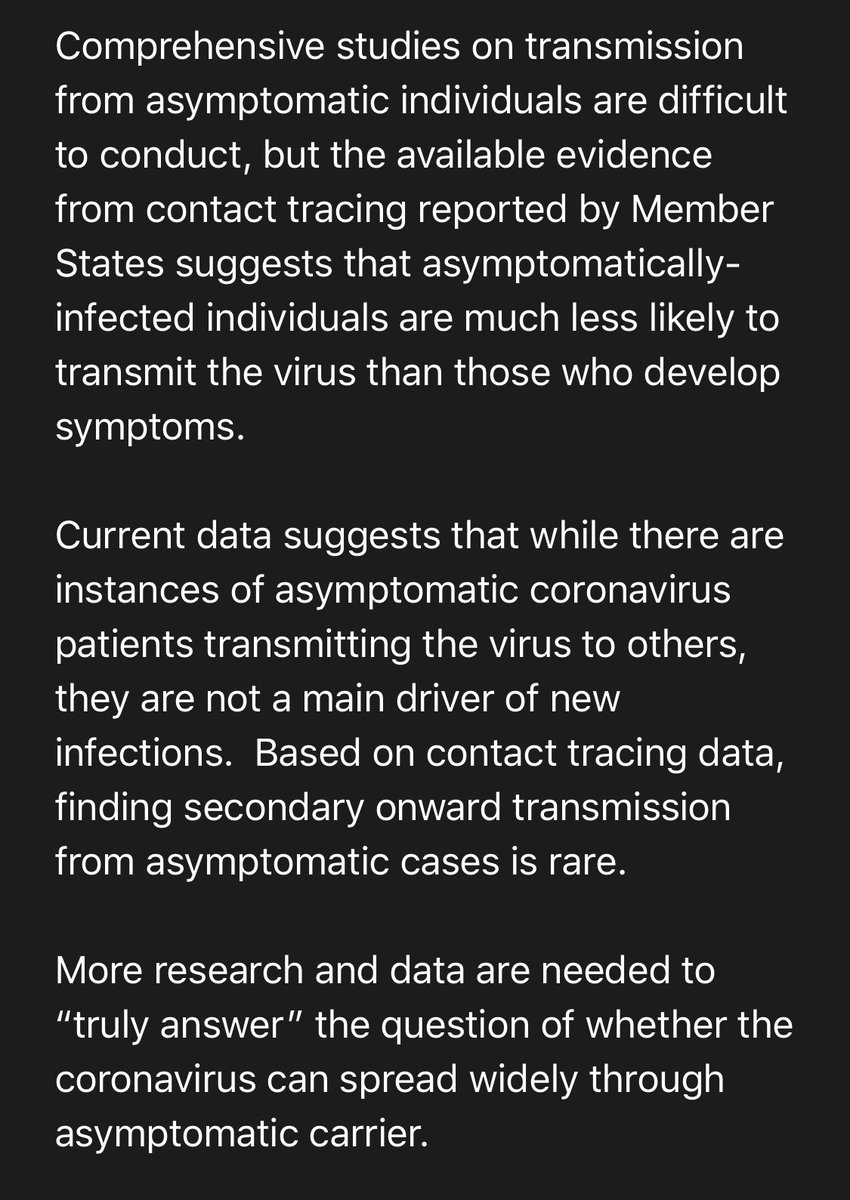 Here’s what I understand. They have a relatively small amount of contact tracing work in China where they found most people claimed to have gotten sick from someone who had symptoms.

When I discussed with scientists and doctors, each was in a bit of disbelief that this would put out. They pointed out:
-there are 4 studies which show asymptomatic spread
-people are not reliable reporters of whether they have symptoms
-by their own admission, they can’t be sure

-reporter by member states doesn’t reach a bar of rigor
-WHO said up until a week ago that people didn’t need to wear masks. They then changed their minds.

I asked— does this mean people don’t need to where masks? They said no. People should wear masks.

(When I told them this would cause people not to wear masks, they were concerned).
-what they actually technically said was that symptomatic people so most of the spreading. The majority of people have symptoms so this is not news.

-they acknowledged to me directly that they can’t distinguish between asymptomatic and low-symptom people
-if this were true there would be no spread at schools. Israelis schools just shut due to spread of CV infecting students & faculty

-I asked if schools should then reopen without worry and they would not go that far
-the standard used & the certainty conveyed are a mismatch m. I got a hint that this isn’t the first time people thought the WHO has done this.

OK. So there you have it. WHO statemwnt. Their response to me. Criticism from some experts. And questions they could & could not answer.

Before I interpret I want to attach some sources. H/t @VincentRK

Here is a study which shows the proportion of pre-symptomatic transmission was 48% for Singapore & 62% in Tianjin, China.

Even at the low end of the confidence intervals, 32% & 50% of spread cake from asymptomatic people.

Here is another article. This one from Nature. It suggests people shed the virus most when people have the mildest of symptoms.

Here’s a study showing 23% of transmissions in Shenzhen were from asymptomatic people.

Here is the article about the schools in Israel.

Now my own 2 cents which are worth a lot less than people like @VincentRK who was one of a number of experts I consulted but here goes anyway....

1. We still know very very little about the virus. We are 6 months in and still learning things.
2. Some of the things we believe will turn out to be false and some things we don’t think are true will be. That’s frustrating for many but we are in the MIDDLE of the process.

Here is a telling tweet from @thehowie on the understanding of AIDS in 1983, suggesting possible genetic reasons certain people get infected.

3. I’m inclined to believe the WHO means well but something may have gotten lost in translation. That they are seeing lighter symptoms more often but public health by Twitter and press release is a bad habit.

4. I think if your data is thin or not public or contradicted by lots of studies, making definitive statements is a mistake.
5. There are many capable of critiquing WHOs menthols (@CT_Bergstrom @DrEricDing). I don’t have the expertise but they do.

6. It is possible the US media who covered this is to blame. I think after connecting w the WHO that it is being played out here in ways they di not intend. They don’t sound as definitive as the clickbait headlines.

7. I think this has done damage. Too many people have pre-existing narratives things like this uncritically pre-populate.
8. I believe that even if this ends up being true for asymptomatic but not presymptomatic people, um, how you going to tell the difference.

9. If you believe this, don’t wear a mask and don’t socially distance unless someone is coughing or sneezing & has a fever. You aren’t seeing most of those people & the virus is still spreading.

10. There are definitely going to be characteristics of people more infectious & more succeptable. When we learn them definitively it will be of real value. We’re not there yet.
11. At that point we will look back & blame scientists for not knowing everythjng from the start. /e

For good measure here is another study c/o @VincentRK

It says 44% of infections were during pre-symptomatic stage.