COVID Update June 12: Being a governor is hard. It’s not all sitting in the mansion waiting to run for President.

Tough times require tough decisions. This is the case for many governors in the South & West who spent much time last month chirping about the Northeast. 1/

Bragging about how great your state fared wih COVID-19 compared to NY before the virus comes to your state is tempting fate. 2/

After Trump trashed his own reopening plan Dr. Birx carefully put together & said go ahead & open May 1, governors had a decision to make.

Many opted to take the risk (to their citizens, not to them) & reopen without the testing, tracing & isolation Birx recommended. 3/

Now, 6 weeks later, 22 states have accelerating case growth over the last 3 weeks. Another 6 could join them based on this week’s changes. This was Birx number 1 criteria to dial things back.

But you won’t hear anything from Birx, the person who heads our natl task force. 4/

With 1000 people silently dying every day, we have no more COVID national leadership. Even the shell game we had is gone. 5/

[This is the tweet for people who want to respond that I am “spreading fear” or “it’s all over” or show some selective data. The floor is yours. People can read & evaluate.] 6/

So it’s up to the governors to decide what to do with more and more people infected & in some cases hospitals getting filled up. 7/

Take Arizona and Gov Ducey. Arizona is one of the states headed the wrong direction. Cases going up, more positives which means more hidden cases and the hospitalizations getting higher. Hospitals are warning they may run out of room. 8/ 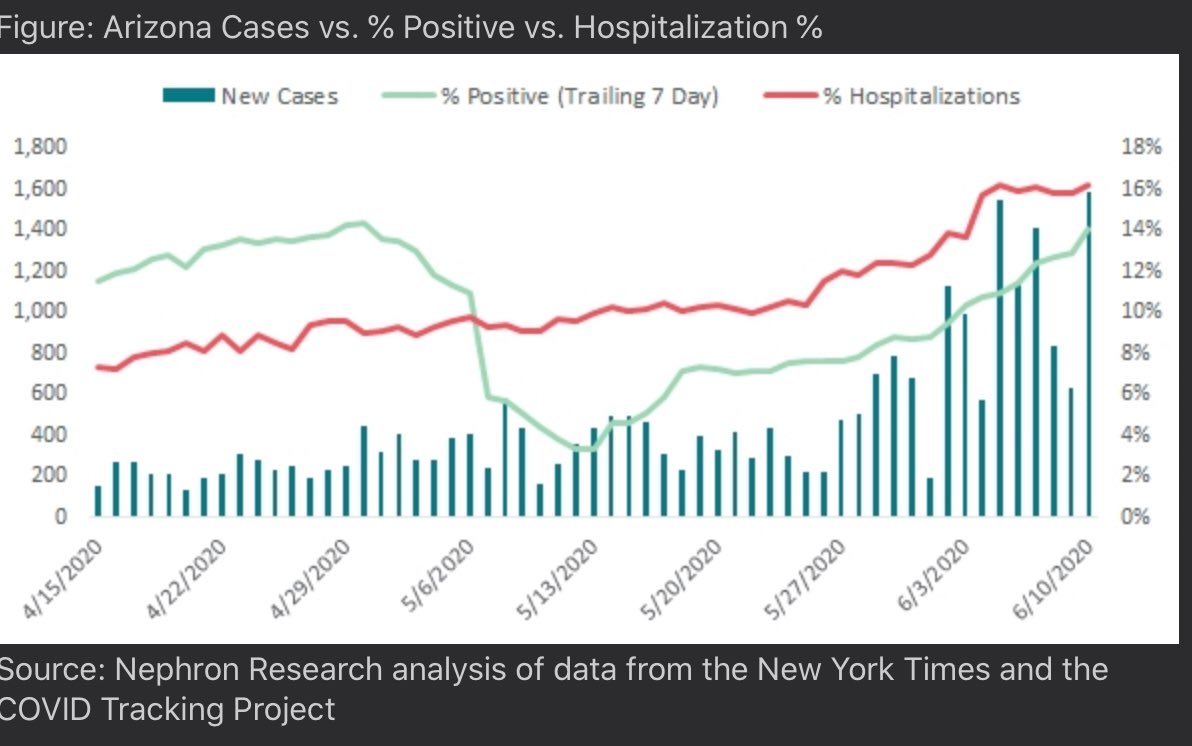 So what are your choices if your Gov Ducey?
1- you can follow Dr Birx’s guidelines
2- you can play it loose but watch hospital capacity knowing you have a 3 week lag
3- you can defy the hospitals and make no adjustments 9/

As I say here with my glasses on my forehead (so I have to be right), as the governor you have to risk the wrath of other peoples’ judgement. The question is whose wrath are you willing to live with?

Which way would you rather be wrong? 10/

If he chooses option 1, he risks the wrath of the head of your party in what could be a battleground state. He wants the economy open period. This despite the fact that you would be following his team’s guidelines. 11/

So you can choose option 3, where your hospitals & docs get upset & your people are scared, but you keep Trump happy.

If he chooses option 3 & things get bad in Arizona, Trump will distance himself like he never met you. “Ducey who I barely know didn’t follow TRUMP’S advice & is paying the price. We GAVE them PPE!” 14/

First, you’re playing on a razor’s edge given the lag of up to 3 weeks between action & effect. Hospitals say they are worried about running out of capacity around July 4. Still, he publishes charts which show how many more beds have been added & claims there is no risk. 16/

The bigger flaw in Ducey’s approach: just because you have hospital beds doesn’t mean you need to fill them. 17/

Since when is this a strategy? Go ahead and smoke. Good news— we have room in the cancer ward. 18/

If Ducey is aiming to keep the economy going he’s also gambling. Will an economy thrive with wide community spread & no containment capability? What’s calm & steady about that? 19/

Only North Carolina has said they are considering adding restrictions. The rest are full speed ahead. 20/

Who is “calm & steady?” The one who eases back in or the one who doesn’t invest or won’t watch the data? 22/

I talked to @PhilMurphyNJ when he was in the middle of the crisis in NJ. Listen to the way he problem solves, seeks help & shows humilty when less was known, when there was minimal PPE & when they fought fo find equipment. 23/

Most politicians like to deliver the good news. So you peddle optimism or ingesting drain cleaner when there’s bad news, or better yet, you only come out when forced. 24/

Sometimes no matter what you do, you’re going to be criticized. If you can’t handle making tough decisions, there are other lines of work.

Not every leader is built for once in a century challenges. But empathy, steadiness, preparation & our safety feel like little to ask./end