Debate/discussion/rants about app stores (or perhaps The App Store) have rapidly polarized to the point where it seems difficult to have a rational discussion. Even trying to discuss is viewed as a defense. A discussion without defending. The situations are similar, really. 1/

2/ Mostly I want to talk about the problems app stores in general solve and how that relates to a rather precedent setting document, the Windows OEM Preinstallation Kit (OPK). OPK set forth the rules to be followed when a PC maker "bought" Windows. 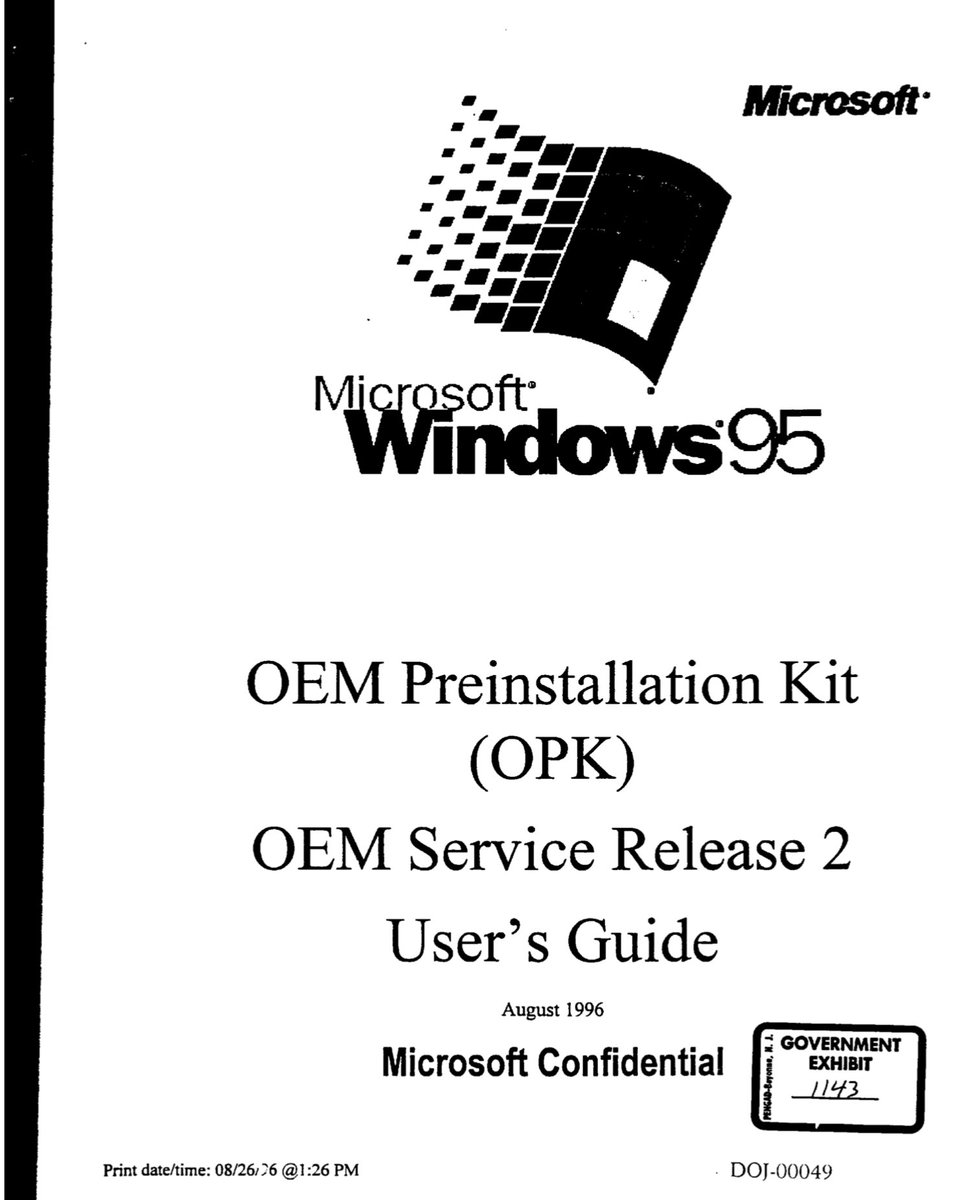 3/ Much of the DOJ v Microsoft antitrust case was perceived to be about browsers or even "bundling" but in fact it was really about the terms and conditions that came with selling a Windows PC. The regulation that followed was much more about that.

4/ Before this, in old old days, MS made software and PC makers paid essentially as distributors or "middle men". They viewed MS as a component provider of BASIC. MS viewed them as licensee. There was no real retail/consumer market for software.

5/ Over time, as PCs all became IBM compatible PCs and the important software was MS-DOS the OS became more important to the marketplace. Making a DOS-compatible computer was cool. But challenging, as after a short time PCs started to look like indistinguishable commodities.

6/ As software people we always thought this was weird because we saw so many things we wanted from computers (faster, lighter, quieter, more ports, ….). OEMs decided that the best way to differentiate PCs was with software like this Sony. (Serious about making HW, add some SW?) 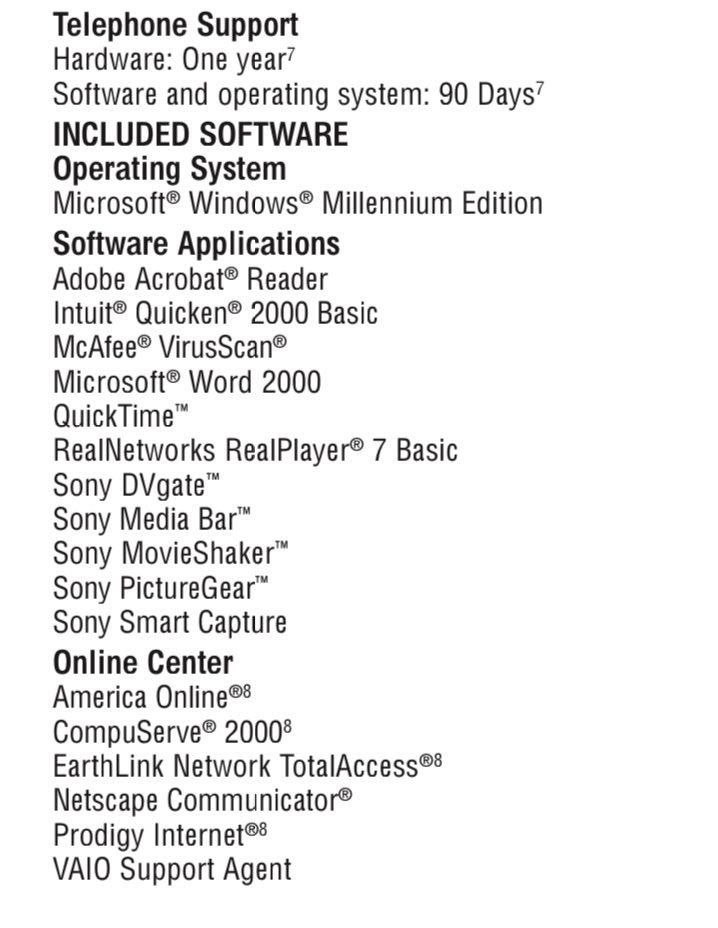 7/ As software product people we liked more software but the problem was added software was not thought of as a product—it seemed more like "what can we get cheaply/add to differentiate". Some of this duplicated, interfered, or was just poor. WiFi selectors. USB drivers. Etc.

8/ Of course some was just to fill in gaps in DOS or to add features to DOS customers wanted. The product side of the the OS team just wanted the PC to work. Windows 3.x PCs were starting to become rather "frankenstein" in how they showed up at store—whole parts replaced.

10/ This seems fair and very focused on customers. Reviews of PCs had started to refer to bloated PCs that booted/ran slow because of all the stuff that was installed. From the product perspective we saw all the poor techniques these apps used. 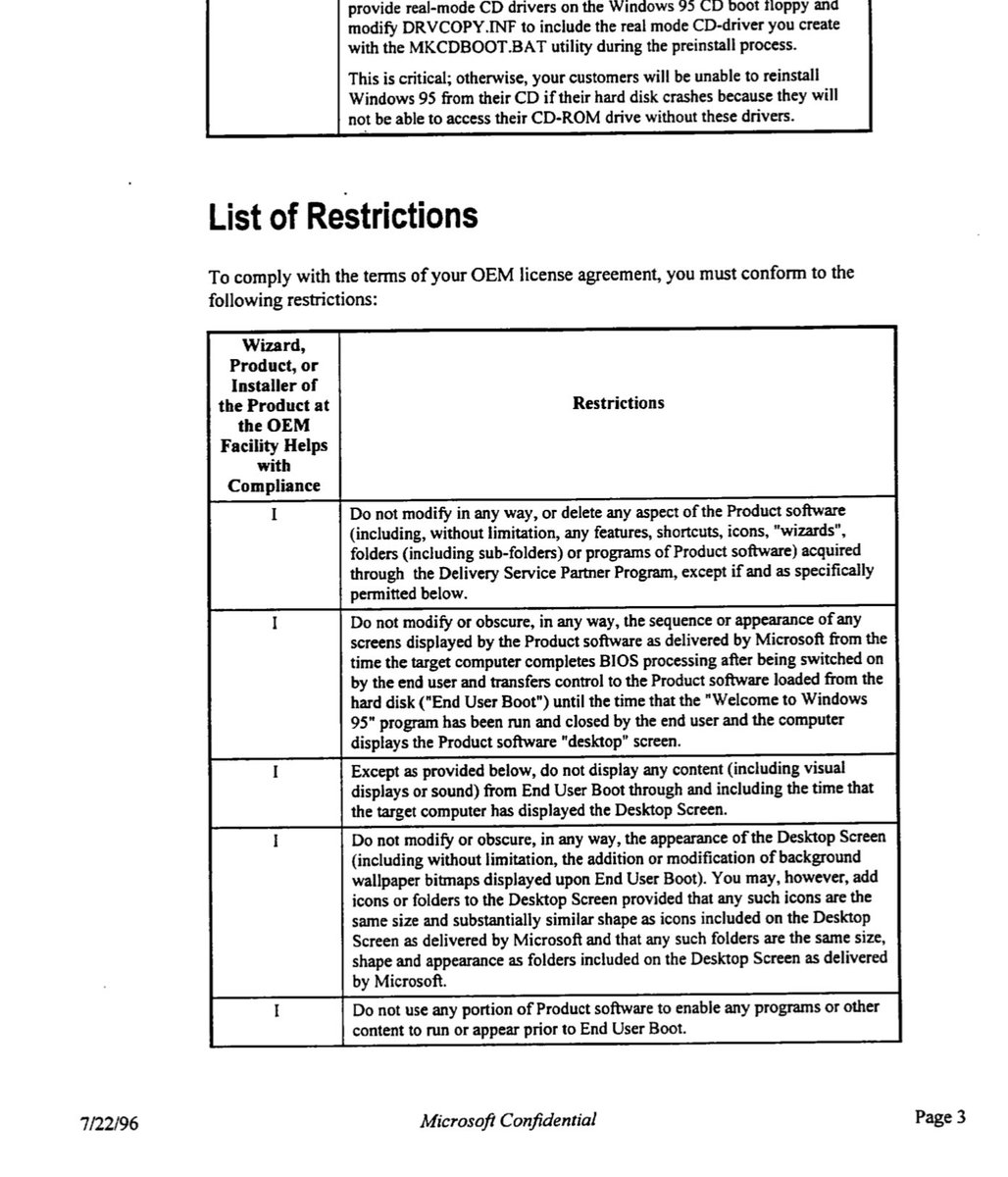 11/ OEMs, regulators saw things differently. They saw this as Microsoft getting in the way of freedom of a PC. OEMs should be able to do whatever they want after all they owned the customer. Certainly the product team thought the end-user was the customer. The business side 🤔

12/ Who was the customer? The OEM or the PC buyer? Ask the person with a broken PC and they almost always thought of this as a Windows problem. They would call Microsoft and through a complex phone tree ended up with Dell’s phone number good for 90 days from purchase.

13/ While Microsoft was paid for Windows, it was from OEM. So OEMs reasoned they could do whatever they want to Windows essentially acting as the customer would. But Microsoft viewed the OEM as a distributor and the end-user was the licensee. Really complicated in a legal sense.

14/ But no matter what, our mutual customers thought of this as a Windows problem. That was the product person view of the situation. It was enormously frustrating to see OEM PCs with flakey software or worse "first run" or "out of box" experiences through all those screens.

15/ Over each release of Windows the OPK got more complex because for every rule that was added, OEMs would sort of hack around to do what they wanted anyway. Btw, the OEMs learned they could get paid (not pay) to include software which totally altered their incentive.

16/ By hack I mean do things like run programs after initial setup that would hide Windows features or get around limits on number of programs by running another program to install many others. The PC+OPK became a game board and customers were in the middle pointing to MS.

17/ Yet this whole time the distribution through OEM remained valuable. It was after all the value MS saw too—why not others? But who would be accountable for a PC? As a platform product customers tended to blame Microsoft. It didn’t help that Microsoft was profitable and big.

18/ Aside: I was on Office. We even got nailed for violating the OPK because of the "Office Shortcut Bar" which was a somewhat loved feature that was deemed to be "an alternate program launcher". We didn’t have a big OEM business but some. Rules were adjusted.

19/ @waltmossberg coined the phrase "craplet" to define this stuff. Conventional wisdom became that the only way to get a "good" PC was to do a "clean" install of Windows. Unfortunately most product people at Microsoft agreed and did that. We lost touch with customers.

20/ Of course all of this took a dark turn when the rules were viewed as ways to exclude competitive software from the PC. Cynical folks might have thought that the complaints about browsers were just a way to gain an upper hand for more craplets.

21/ Things don’t really stop there though and this isn’t about the antitrust case. Much was being made about how much better Macs were than Windows. Fewer viruses, malware, etc. Everyone remembers “Get a Mac” tv ads. I do. So did JimAll running Windows.  https://blog.seattlepi.com/microsoft/2007/01/10/jim-allchins-mac-message-the-full-text/ … 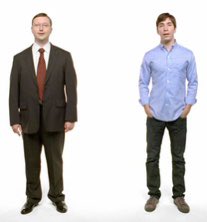 22/ PCs had long been the targets of viruses, but a new kind of software emerged—malware—thanks to the internet. Now the (crazy new) innocent step of doing a search for some software led to downloading and installing really bad software.

23/ Trying to watch that BitTorrent clip of a movie or trying to make your game frame rate increase or create a free PDF? Search and download then your PC is just a couple of clicks from being pwned, or just forever slow and flakey. Ugh.

24/ I know most people reading this would say this does not happen to them or they know better or just give them control and they can prevent it. This is not about techies. It is about normal people who get duped into these problems. Millions of times. Again and again.

25/ The problem isn’t customers or even distribution. The problem is that any platform at scale is going to became something of a hacking surface—a game board to be exploited. That’s really unfortunate but just is. The platform rules (APIs or contracts) form the board. //Cont’d.

26/ Of course most everyone reading this has two reactions to that. First, they don’t think they are suceptible to these tricks and can recover. Second, as a developer they would never exploit a platform this way and only try to solve customer problems.

27/ That gets back to OEMs. These are very customer focused companies looking to build products for their customers. Yet somehow for whatever reasons they end up shipping software that doesn’t always make a platform shine and in some cases even degrades the experience.

28/ Over time the OPK rules became more complex because no matter what, each OEM wanted to have a competitive edge over the other OEM. That is not said to judge in any way. It is simply how a game board works, especially over time.

29/ Many thought there should just be no rules. We tried a world of no rules and PCs essentially became unsafe/unusable. We routinely tested battery life or boot time of an OEM install v clean PC and the clean PC trounced the OEM PC. Customers still thought "Windows PC".

30/ When Smartphones came along with app stores it was abundantly clear to me (and many others) this was a solution to having a positive customer experience and better maintaining that experience over time. Stores curating apps to weed out exploitive use cases were a win.

31/ Even better it solved an age old problem of how can customers even find software reliably (versus a search engine). In other words, the stores solved for quality and distribution at the same time. Distribution costs money, lots. Now the platform produced customer leads.

32/ Here we are today though having perhaps recreated the OEM problem except instead of hardware makers there are many software developers who look at the rules, look at what they want to do, and decide they have a better way. Like OEMs though…

33/ the question really is if the many parties that come to deliver the customer experience are aligned? Can they be aligned? Clearly no one wants to go back to a free for all (no matter how many techies say bad things don’t happen to them).

34/ All the good that stores bring is all of a sudden being looked at through a lens of trying to accomplish things that may or may not be the case. Many times through the DOJ trial the question turned to intent and whether it was pure or not.

35/ Some specific instances were proven to be, at least in the eyes of important actors, exclusionary. But most everything in the OEM OPK was rooted in trying to keep a Windows PC experience from being really crappy. My Office shortcut bar was kind of crappy on W95.

36/ The question is really about customer experience and maintaining a value prop. Were the major PC makers bad actors? Microsoft didn’t coin the phrase craplets. Well intentioned people can do things that muck stuff up for many.

37/ Obviously no one reading this is a bad actor. Obviously platform makers have no vested interest in doing things that make the platform "hostile" to more developers. Everyone says they are doing right by customers from their perspective. Yet here we are (or were).

38/ Today we’re hearing all the examples of good actors who say they want to do good things. We’re not hearing from bad actors who would have destroyed the smartphone experience—maybe even prevented the app revolution from happening.

40/ I know some will take each rule and say it isn’t needed or goes to far, like OEMs w/OPK. My point isn’t to defend status quo. It is to point out that this is very difficult and there are huge benefits. The discussion is nuanced, at least given what I experienced. // END

/PS Rolled this up and annotated with new content including: the rationality of ecosystem actors, ecosystem optimization, most favored nation status, and what's a fair "take" & more. Let’s keep discussing here.

The App Store Debate: A Story of Ecosystems  https://medium.learningbyshipping.com/the-app-store-debate-a-story-of-ecosystems-938424eeef74?source=social.tw …