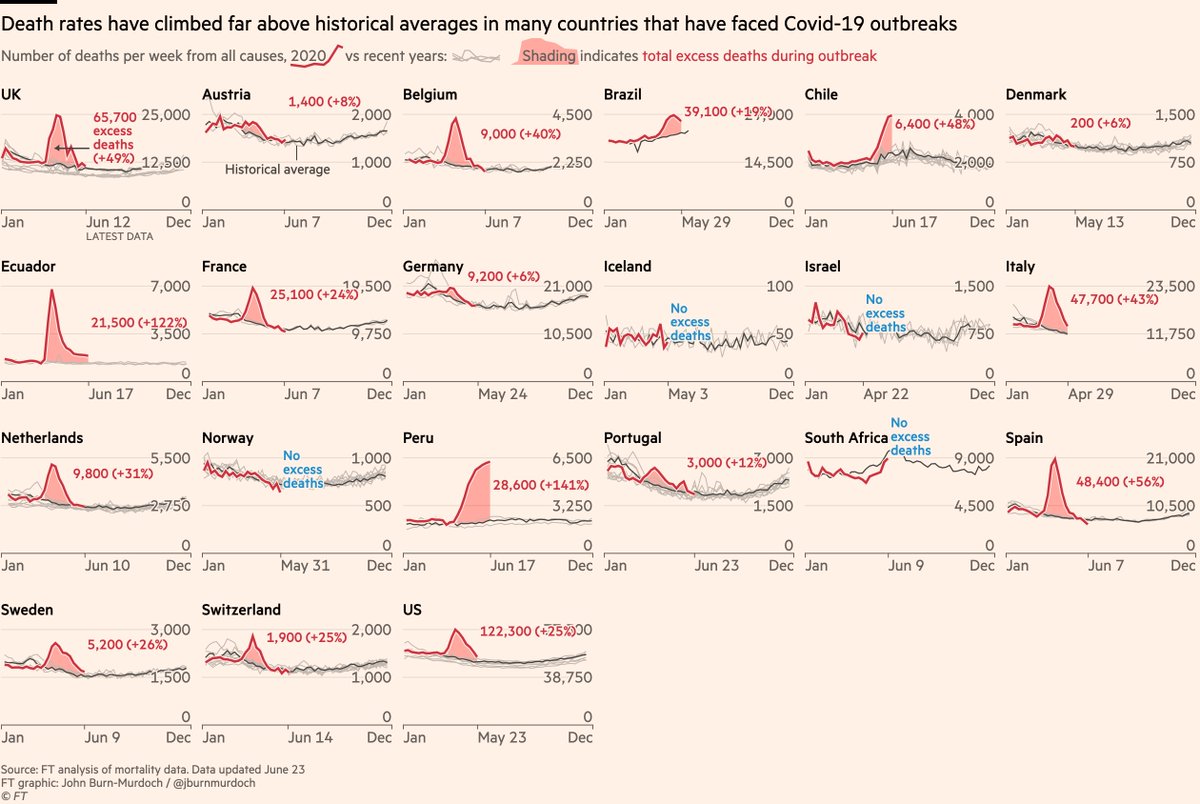 UK, Spain, Ecuador and Peru among the worst on most metrics. 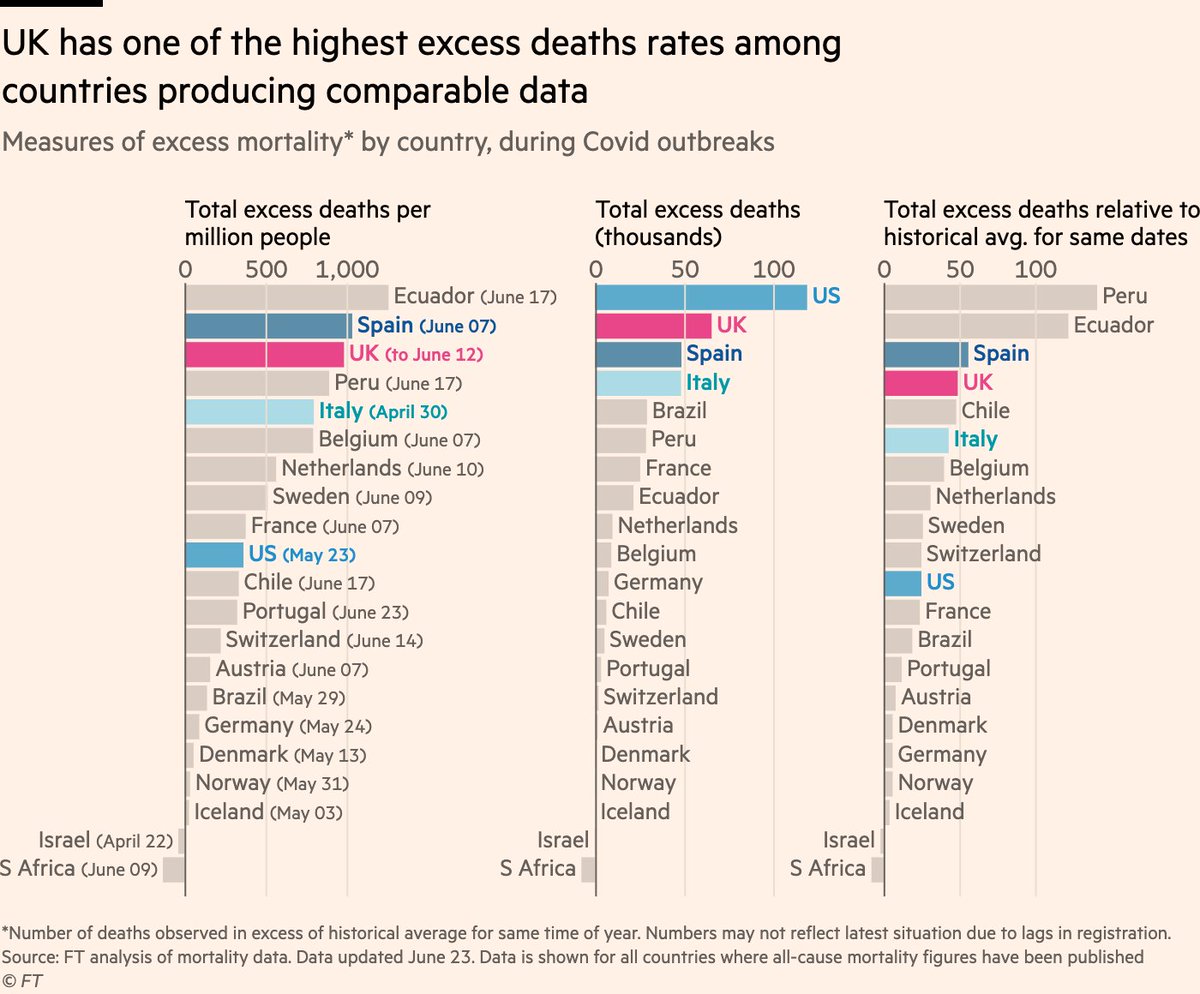 Top row is all Latin America, which is now the undoubted global epicentre of the virus. Mortality has soared in the major cities of Ecuador, Brazil, Peru and Chile. 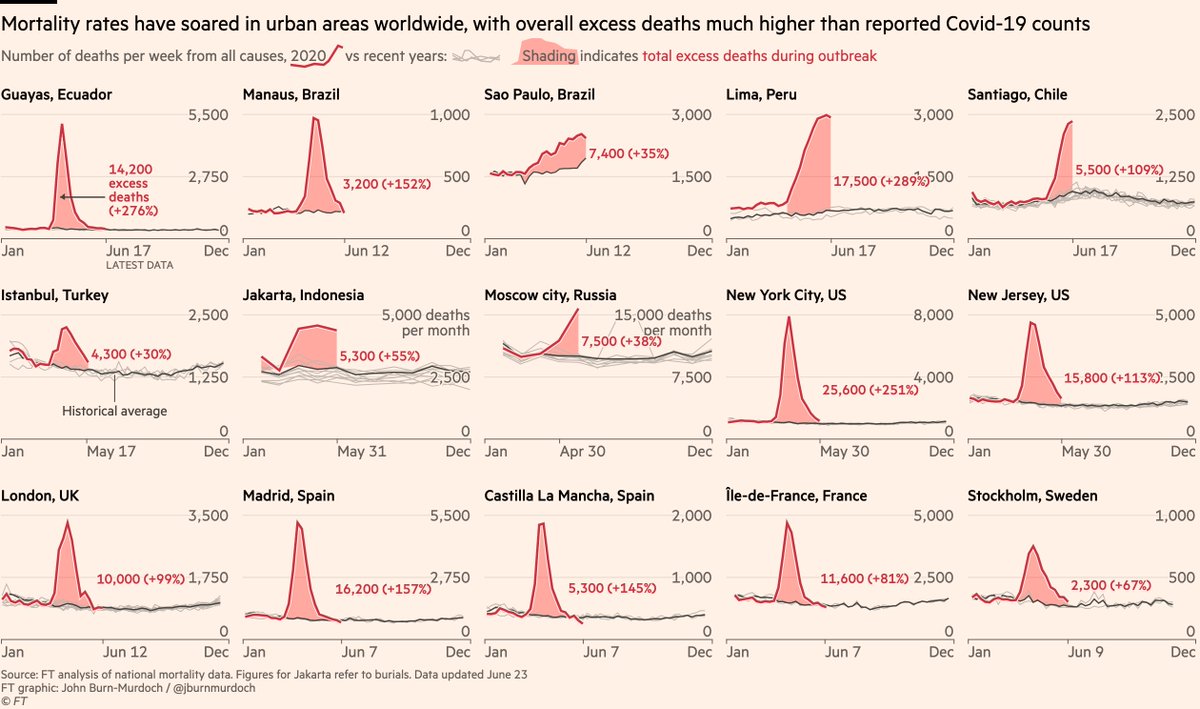 Nationally, US hit at least 122k excess deaths by May 23, 30% higher than the 91k Covid deaths reported at the time. 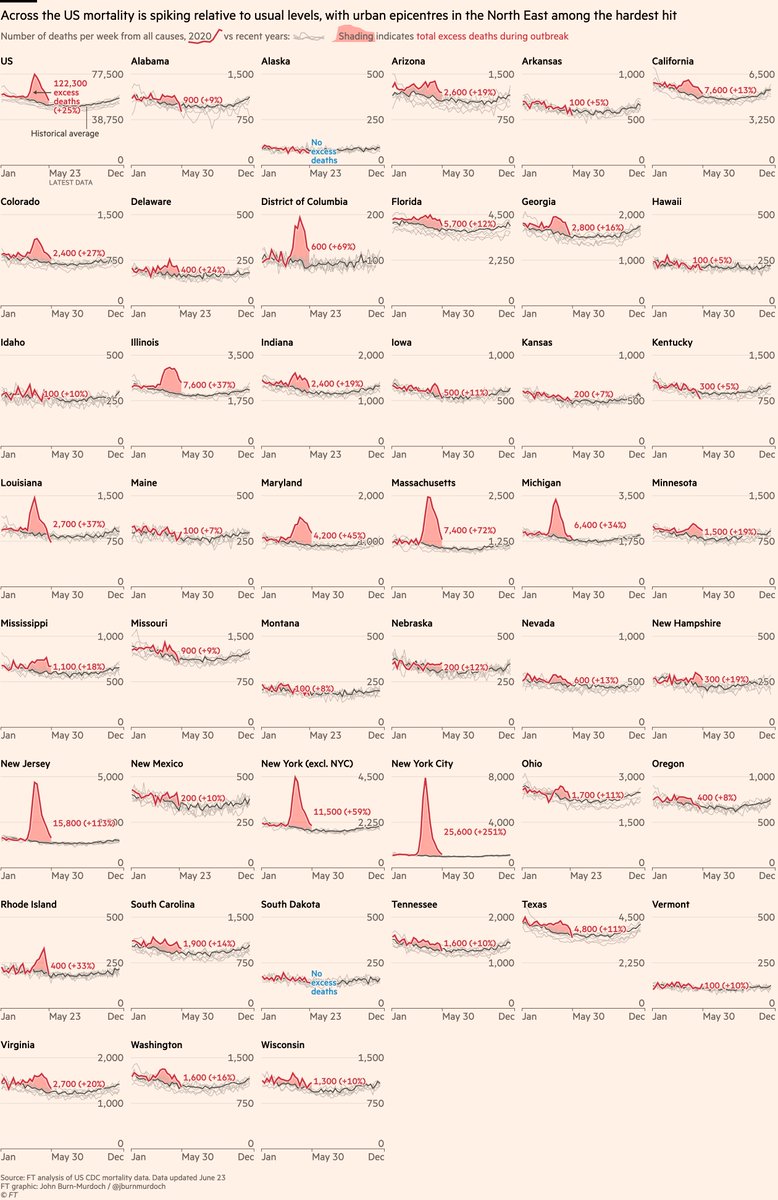 Overall across the 24 countries where we have excess mortality data, we find 454,000 excess deaths during outbreaks.

This is 51% higher than the number of Covid deaths reported in these countries at the time.

You can freely access all our raw data here:  https://github.com/Financial-Times/coronavirus-excess-mortality-data …

UK has suffered one of worst outbreaks anywhere

All 12 regions saw mortality at least 30% above normal

Bad outbreaks in many regions suggest action taken too late. 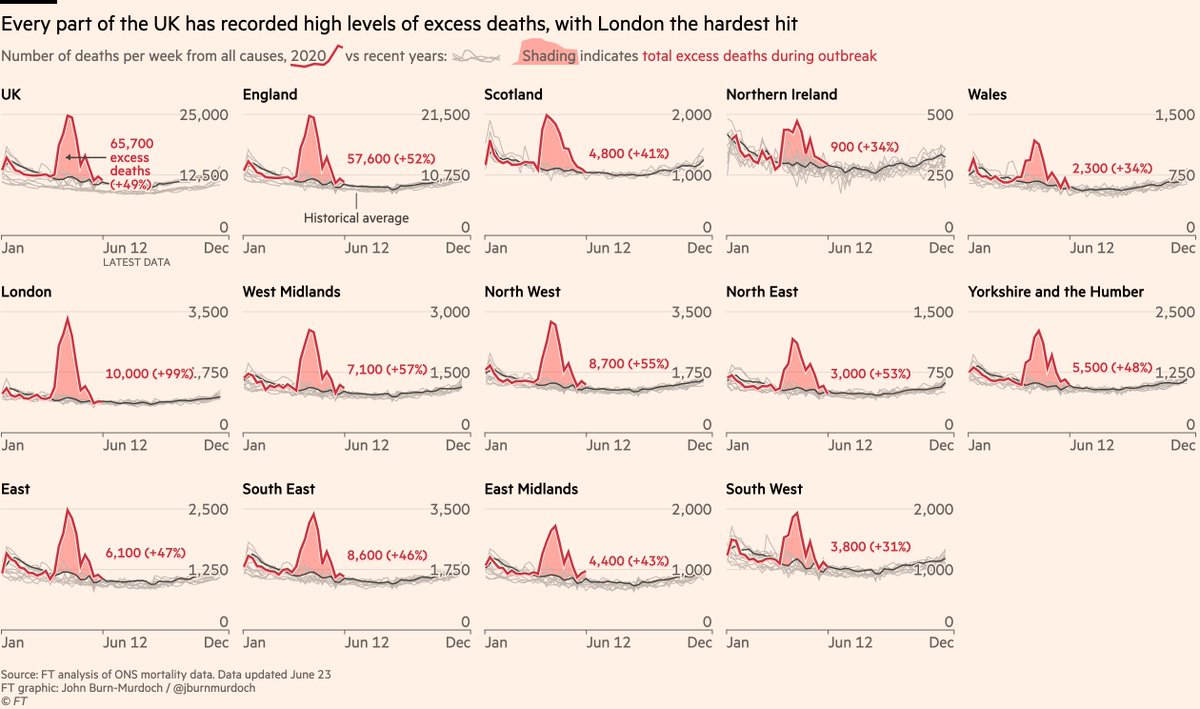 Here’s the same for Spanish regions.

Many parts of Spain had severe outbreaks. Three saw deaths more than double, and a total of 10/19 saw at least a 30% spike.

Nonetheless, the data suggest the worst of Spain’s outbreak was contained in fewer regions than the UK’s. 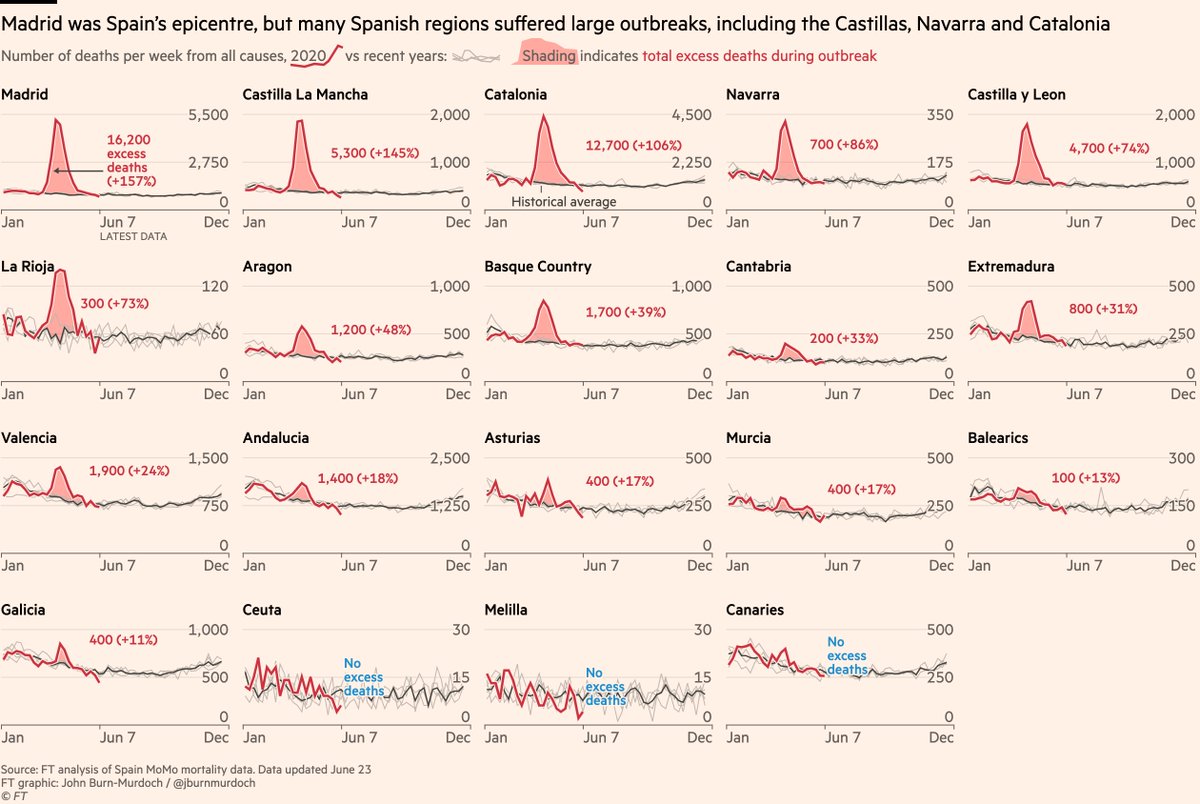 Lombardy hit v hard, and 5 other northern regions saw excess deaths of 50%+, but in most regions numbers were relatively muted, including Lazio (contains Rome). 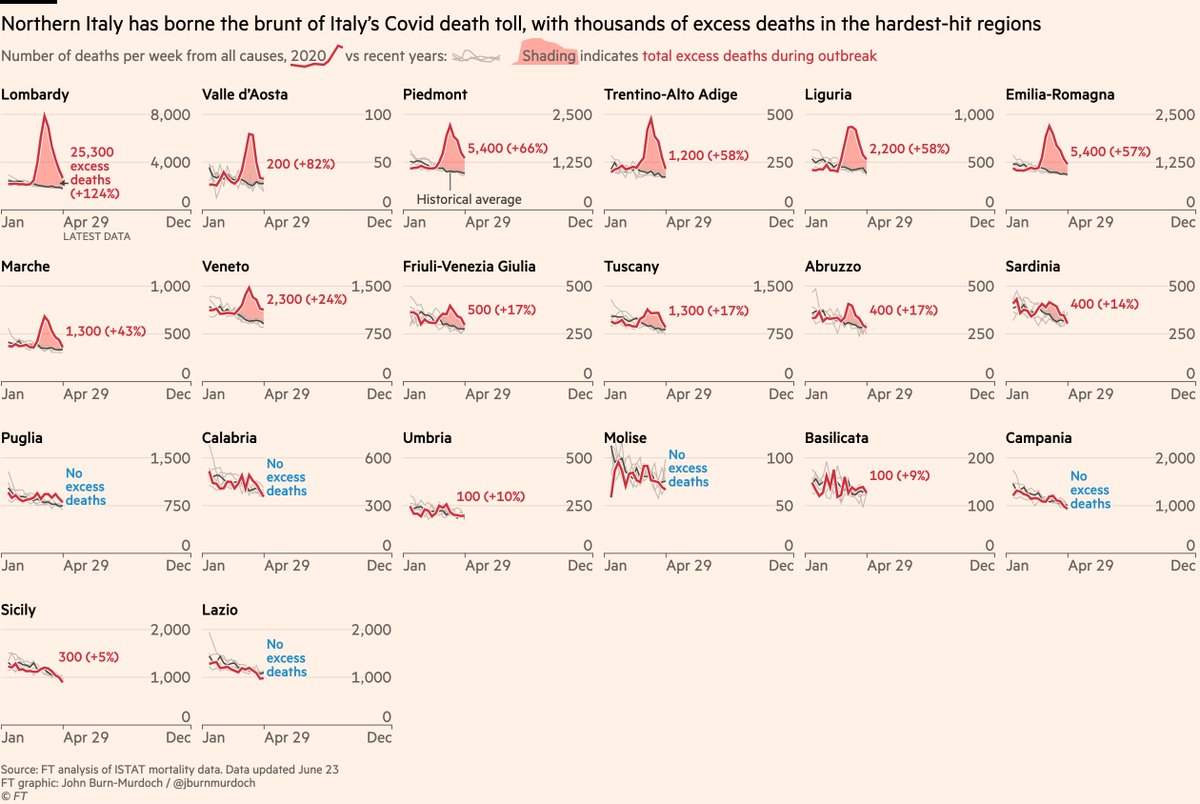 Finally here’s France, where Paris suffered badly, and the Grand Est region also faced a big outbreak, but although most other areas were affected none saw all-cause deaths increase by 30% or more.

For whatever reason, UK’s outbreak spread further than in peer countries. 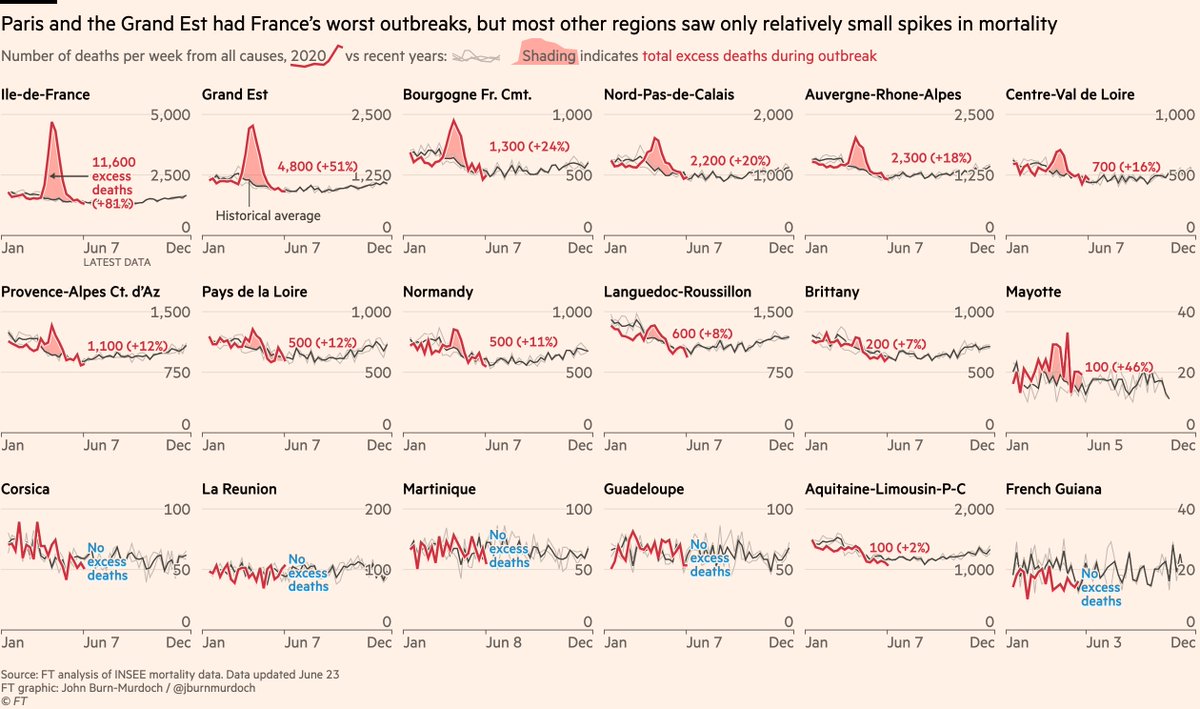 We’re still looking for more all-cause deaths data, where India is now our top target, but any country is appreciated

Ideally daily, weekly or monthly data, for multiple years, and including 2020. Can be for one town or city, not just nationally

And a curious little footnote:

Russia usually publishes data on all deaths from natural causes with roughly a one month lag. Data for March were published on April 30, for example.

Almost two months later, there’s been no update. No deaths data for April or May... 🤔

There are big time lags in death registration. Brazil & US probably the most affected here due to their size.

This means excess deaths for Brazil & US *for the period already shown* are likely to rise. We include historical revisions each time we update our charts.