COVID: Everyone should not have to know someone personally who has died or been seriously ill from COVID-19 for the US to finally do the right thing.

Why do we have to be experiential learners? It’s not like we don’t understand what a virus does. 1/

The fact that there is a “you’re making too much of a global pandemic” cult in our country is ... odd.

We may not be the only country with a group with that mindset, but it often seems like it. And we may the only one where the ringleader is the head of state. 2/

There is of course a reasonable conversation to be had about how to balance people’s income & health during the pandemic.

This is why we released  http://www.open-safely.org ,  http://www.covidexitstrategy.org , and an entire library of resources for states at  http://www.usofcare.org . 3/

I don’t believe any governor, whether you agree or disagree with them on most things, want people to die. They don’t.

Some may be incompetent. And weak. Or may not listen to scientists. Many may not be cut out for a major crisis. That much is clear. 4/

Many states opened up in May without proper precautions. Hiring no or very few contact tracers, with too high a case count, not sufficient hospital capacity & most importantly no early warning system or plan to pull things back if things got worse. 5/

It’s not as if they didn’t have governors from New Jersey, Connecticut, New York, Mass, Maryland & Michigan telling them EXPLICITLY.

I asked @GovWhitmer about those conversations & what she said is recorded here. Great conversation. 6/

What were states who didn’t listen doing? For many trying to open the economy without the tools. For some discouraging mask use. For some of those, burying the data.

All to an approving president. And VP, of course (the head of the task force). 7/

The primary line of Pence/Trump has been we’re seeing cases because we over-test. There are a few truthers out there still saying that but most have moved on to other things. I think we can rule that out as the issue (thread). 8/

Does they remember the sequence of how this happens? It will be mid-late July before we would see that. 9/

Rather than accept the fact that maybe the virus hasn’t gone away, truthers say it’s only hitting younger people. That’s grand if people never interacted with anyone else.

But nursing homes have attendants. Who have families. Who go to grocery stores.11/

And the virus is also random & indiscriminate— leaving some people regardless of age with barely a symptom; others with haunting, awful symptoms; hospitalizing others with horrible complications.

Until we have the contact tracing resources, we won’t know where it’s spreading from, who has it & where it’s going. So we won’t be able to contain it. 13/

& I and several others put together a serious proposal for contact tracing capabilities for the country.

But Mitch McConnell has decided it’s not urgent & they are months from taking something up. 14/

Of course Senators & Congresspeople from hard hit states we’re immediately supportive. Some who hadn’t seen much virus in their state (at the time) were contemptuous & said this was the work of the “public health lobby.”

These are what I call the “experiential learners.” 15/

Experiential learners can’t be “told” the stove is hot. They have to touch it themselves.

Nevada and Las Vegas are experiential learners. And sadly we will all get scorched. 16/

This is Nevada’s Rt. how the transmission rate changed over time. While NY & NJ went through hell, the Las Vegas mayor said “we must open airless indoor rooms where people spend hours & hours.” Bring me the stove.

And now Nevada has the highest transmission rate in the US. 17/ 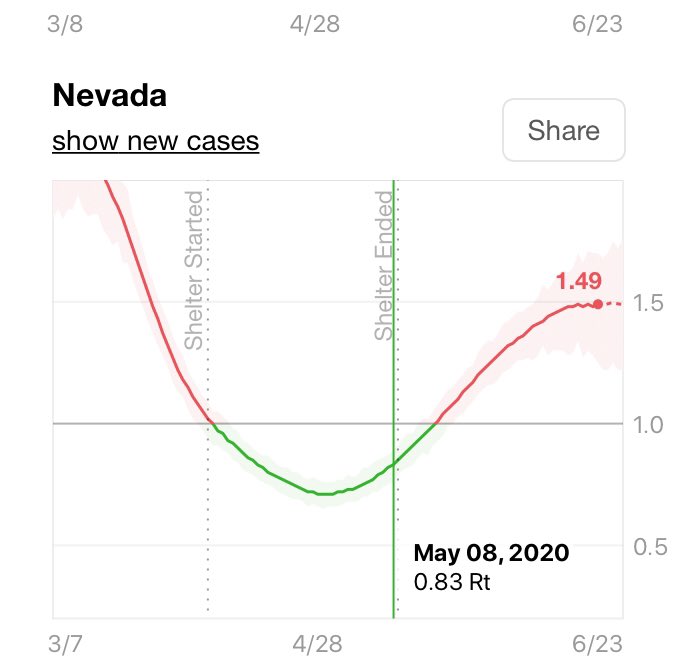 When the transmission rate goes up, so do cases.

Work with me truthers— even though we haven’t seen it yet, then come hospitalizations, then come deaths.

But you really can’t say that to experiential learners. They can’t take the word of people who have just gone through it.18/ 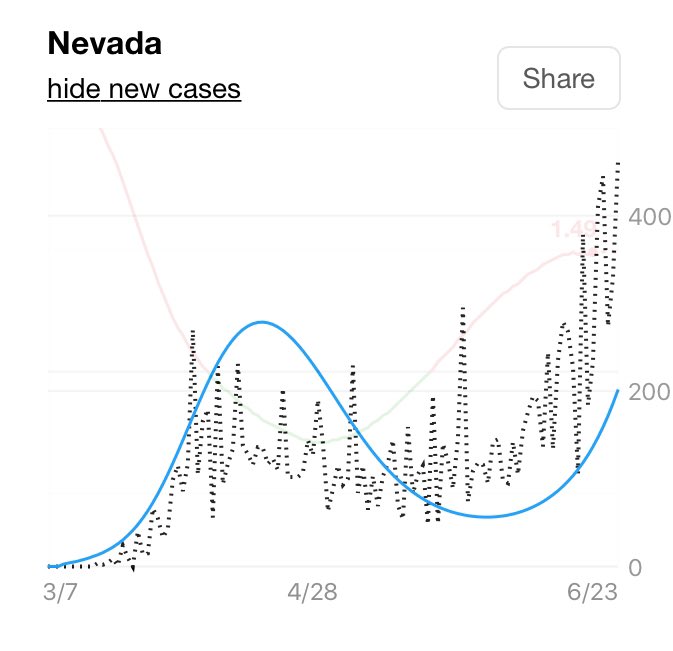 Of course people who go to Las Vegas then go back to all 50 states. Many young & symptom free.

Not forever. Just until they can #OpenSafely. What about all those jobs?

Are gamblers going to forget they like to gamble 6 weeks later? Can casinos not afford to pay workers & not get them sick for a few weeks? 20/

Today I saw my favorite COVID-truther tweet. From someone quite prolific about how everything is being exaggerated. Today the theory backed all the way up to “hospital stays are increasing in Florida because younger people want to get Remdisevir.”

Only the stock market will cause Trump to consider acting.

But even if you support Trump, you might consider that this isn’t his strong suit. And your interest isn’t always his interest.

People wear masks around him.
He’s not visiting hospitals.
Not attending funerals. 22/

We can still reduce the deaths from this disease.
-New therapies are being created/manufactured as are vaccines, but I worry not fast enough
-Masks reduce transmission
-Congress can make the resources a priority
-Paid family leave would be humane 23/

Or we can wait and play with the burners on the stove. The likelihood of more drastic actions increase— both a lot more death & a lot tougher shut down are more likely. 24

All those things can be done now. Around & despite Trump.

If we try staring at the stove & just imagining it’s hot, we can act accordingly. /end