I hate to sound like one of those “elite intellectual” types but if state governors don’t learn to understand (or remember from 2 months ago but whatever) what a time lag is between cases & hospitalizations & deaths we will keep repeating second grade over and over. 2/

Recent news— massive growth of cases, increased hospitalizations— is not the result of today’s action. It is a result is actions in May. 3/

DeSantis said the spike in cases has “nothing, nothing” to do with the reopening. (I think his explanation was “goblins” or “magic fairies.”) But definitely not him.

He and others fail to understand time. 4/

Vice President Pence, forced out of his “I know nothing” slumber yesterday was forced to have a media session on the “Task Force” came out, took a bow, and praised how well things were going.

Also not much for telling time. 5/

He insisted that deaths were still not increasing. Again I can’t stress enough the concept of a time lag is a difficult one.

You know those 20% of people immune to COVID-19 in New York? They are all the untested people who were infected in March. 6/

Those later became older people and then hospitalizations.

But the stop testing-take away health care-its all rosy Administration is taking the lying and praying approach to the pandemic.

Did Pence once say: “be careful?” Did he say “wear a mask?” Did he mourn the losses? Did he warn how contagious this is? Did he ask America to pull together? Did he tell us to brace for tough times?

Pence performs for only one audience. And no taxpayers it turns out. 9/

He was pushed out for one reason and one reason only. The stock market.

And he spent some time trying to talk the stock market up. I think it worked about as well as praying away “evil” thoughts. 10/

He’s happy to have you not wear a mask, gather in crowds, risk your life.

But in the Oval, everyone wears a mask but one person. 12/

Remember when “alarmist” Andrew Cuomo warned they needed to act or their hospitals would be overrun?

That’s because you’re supposed to pull the alarm when you smell smoke not wait until you see fire. Unless you’re Trump, Pence or one of the 3 not-so-wise men. 14/

In the middle of May when a number of us out together our #OpenSafely guidelines, I asked many people to endorse them. And many did. 15/

One prominent Republican however who was advising a number of governors refused. He told me the Republican governors had had enough of the public health. They were opening the economy. And it was unrealistic to ask them to #OpenSafely. 16/

“You’re tone deaf Andy.” He emailed. Maybe. I was asking that they have tools in place to contain the virus & commit to pulling back before hospitals were 70% full.

You see time. Give yourself time. 17/

This week I received a call from a familiar voice. “Andy, what do you suggest they do?”

I wanted to a say that but see I’m not a smartass. I actually couldn’t find any coherent words worth saying. 18/

Governor @dougducey, you will now be dealing with this likely through the end of the Summer at a minimum. You are not New York at peak given your density.

But that leads to the next “mathy” point. Exponential growth. 19/ 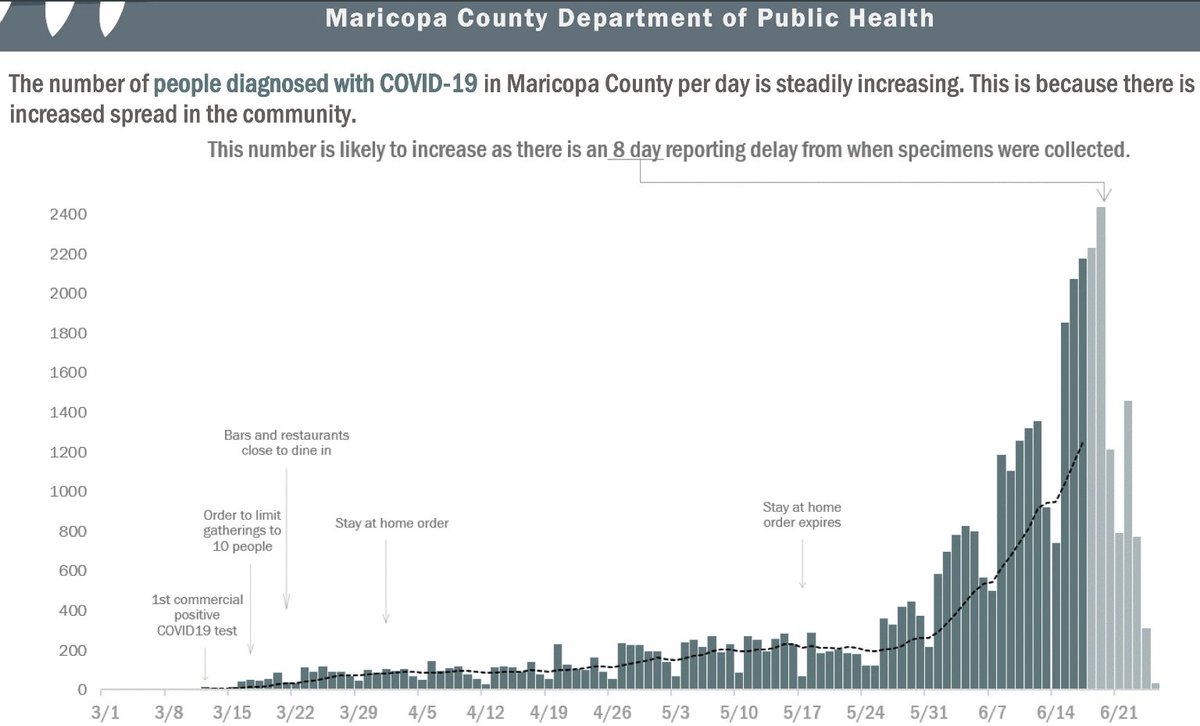 There’s more to learn besides addition, cause & effect, short term memory, science and humility. Although that is a lot to learn.

There’s also the concept of exponential math. Things will get worse, much much worse, for every day you don’t change course. 20/

The lag between opening, people testing boundaries, feeling symptoms, deciding to get a test & getting a result is weeks. Hospitalizations a couple weeks later.

We are certainly not unique in getting hurt by the virus. But we are unique in not understand the lesson after it unfolded. 22/

If you live in a state outside of the hot zones, don’t let your governor get puzzled by the fact that things aren’t getting better worse yet.

Or if in a hot zone, that they close the bars but the numbers keep going up.

But if they play dumb you shouldn’t have to. 23/

Now we know why we studied these complicated subjects in grade school. They do apply to real life. While Trump was in the hall picking on kids who didn’t have nice watches & Pence and Ducey were cheering him on, something important was going on. 24/

Others were learning how to be basically numerate. Not to mention at least a little bit kind. /end