Population behavior is changing.
Hospital treatments are changing.
And our ability to measure cases and deaths is dynamic, imprecise, and often laggy.

But I did my best to make the story as simple as possible.

Sometimes you see the case-death gap presented in an international comparison like this.

At first glance, these graphs seem to tell different stories. 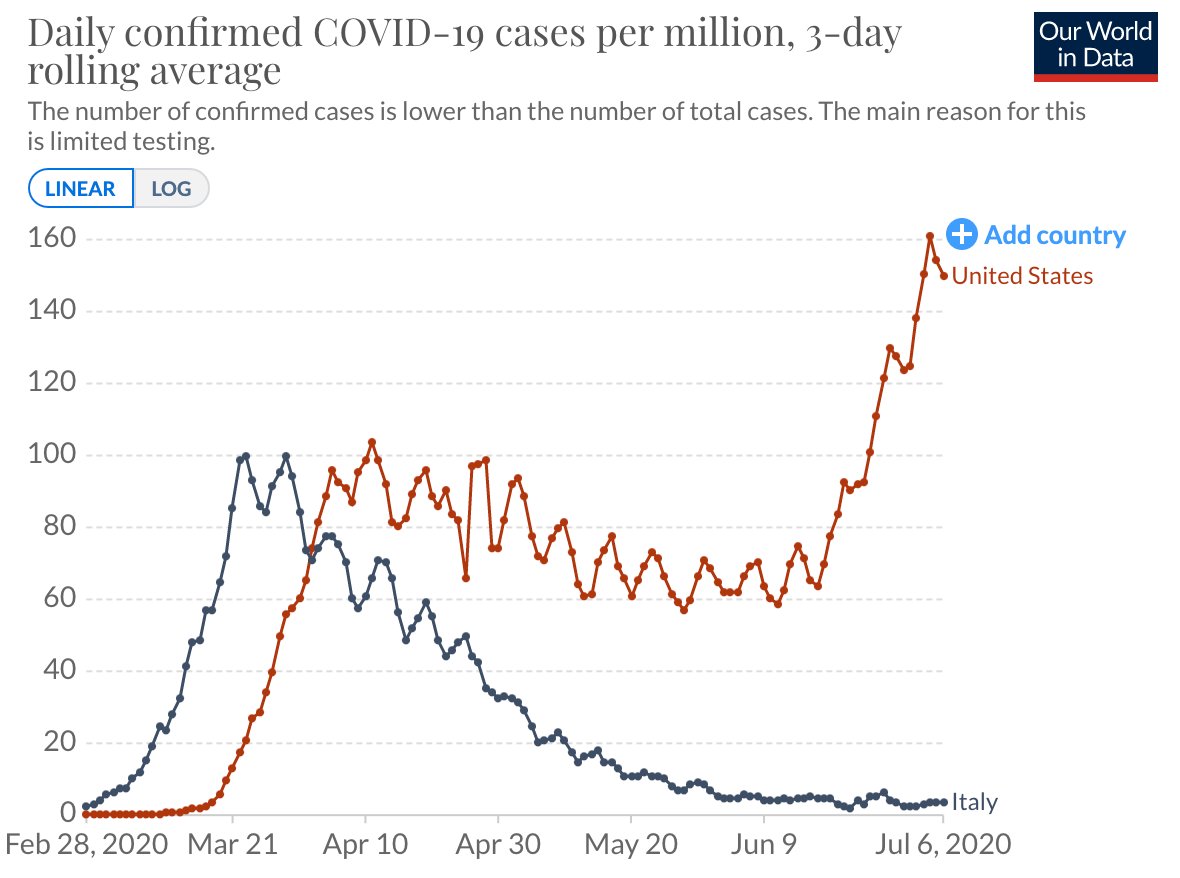 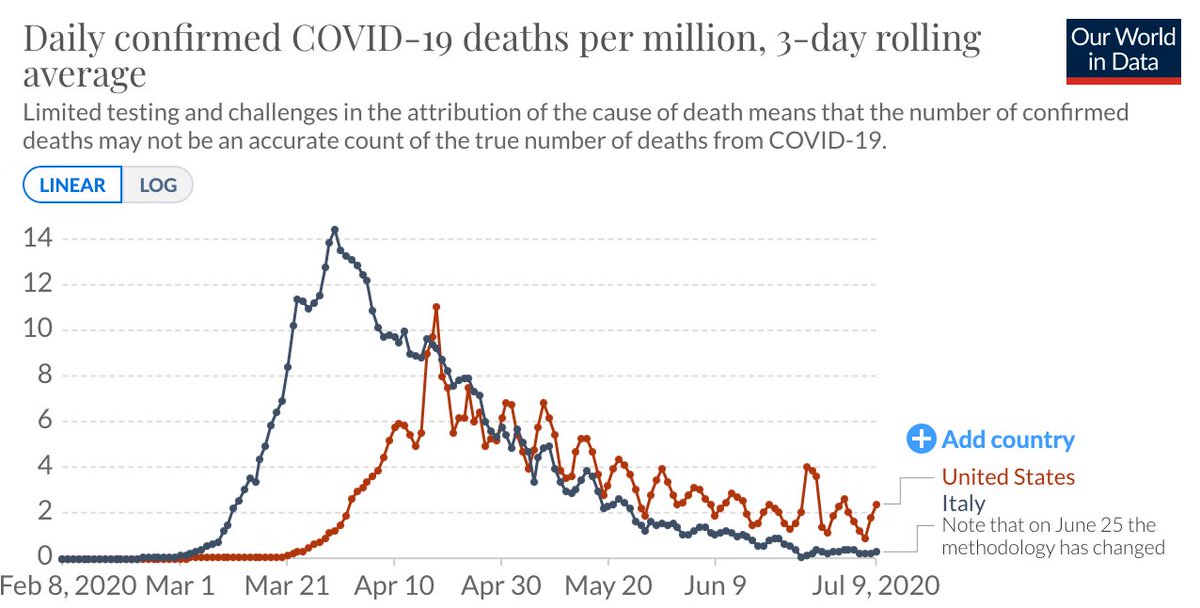 International comparisons are a little iffy. So let’s just look at the U.S.

Cases, hospitalizations, and deaths moved up and down in tandem before June. After June, they somewhat diverged. Something’s going on.

Here are 5 explanations and an omnibus warning. 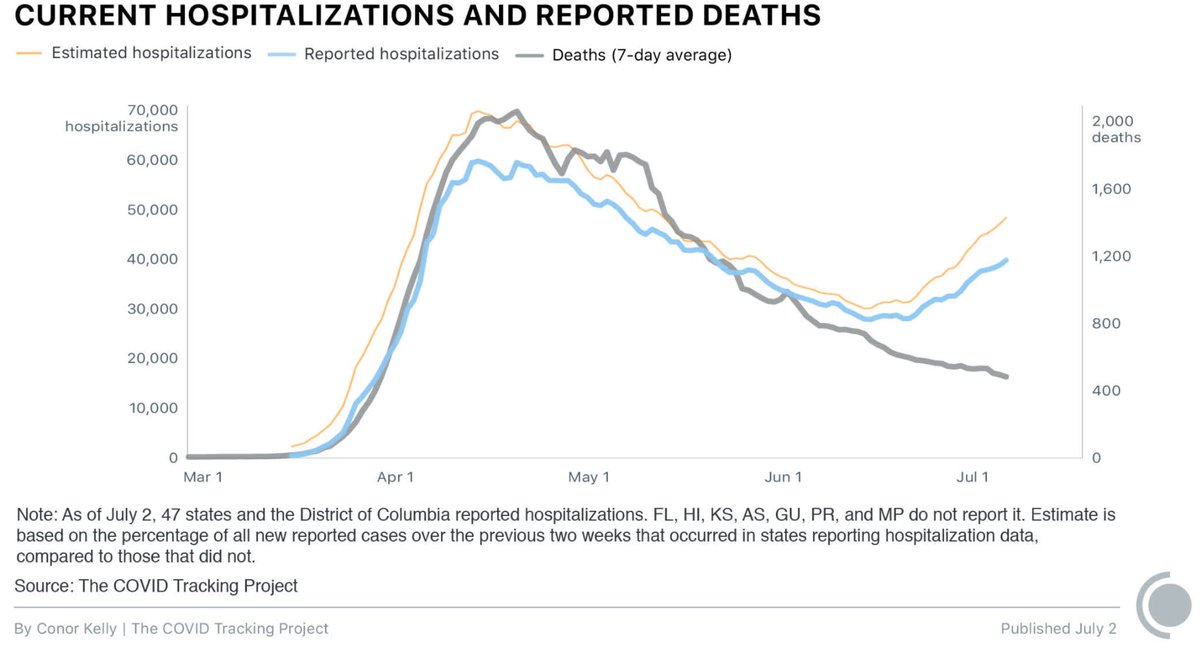 1. DEATHS LAG CASES AND THAT MIGHT EXPLAIN ALMOST EVERYTHING.

This one goes in all-caps. We're already seeing death averages soar in the hotspot states of AZ, FL, TX. 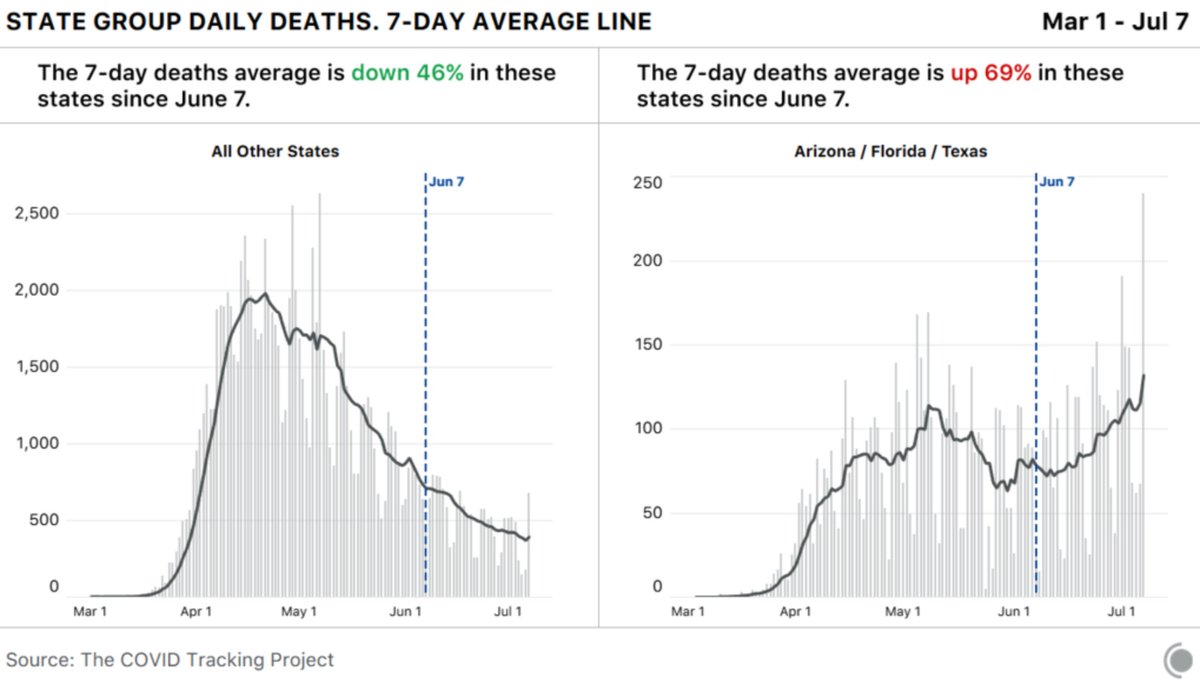 In March/April, tests were scarce and rationed for the sickest. Now testing has expanded, and we're finding milder cases fast and fatal cases *earlier* which means a longer death lag.

3. More new patients are younger, and less likely to die.

In FL, median age of new cases fell from 65 in March to 21 last week. In AZ, TX, and CA, young adults are driving the surge.

Blaming bar hoppers is fashionable. But we should also blame states for rushing openings.

4. Hospitalized patients are dying less frequently, even without a home-run treatment, as doctors get smarter about the disease, and fewer hospitals are disastrously overcrowded.

5. Summer might be helping—but probably only a little bit.

If there is a relationship between viral load and severity, then more masks and more outdoor interactions ~might~ be leading to more low-dosage cases. There is also some epi chatter about Vitamin D effects.

In sum: The case-death gap is real, and worth our scrutiny, bc even if it's mostly a lag effect, everything we learn about COVID helps shape our civic response to it.

But do NOT take comfort in lower death rates. There are a million non-fatal ways this disease can ruin us.

After all the graphs, statistics, science, and interpretations, we’re left with a simple fact: Hundreds of Americans are dying daily of a disease that's infecting hundreds of thousands of us each week.