And another: the Real-Time Population Survey, conducted in coop with Dallas Fed, suggests a decline in employment between the June and July reference weeks 1/  https://sites.google.com/view/covid-rps/ 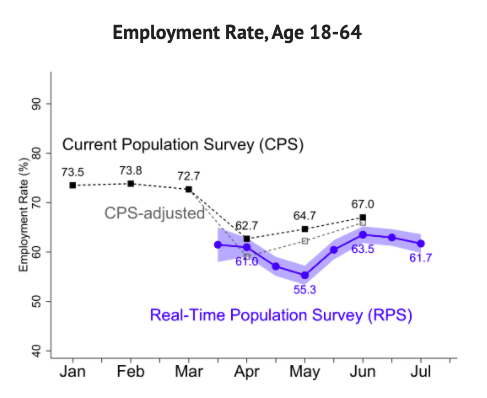 It's still not clear whether the official BLS number will be a small plus or a minus. But it won't be another big positive month 2/

Something I'm just registering: because official monthly employment reports are actually snapshots of the second week of the month, "August" numbers will reflect reality <3 weeks from now. It won't be great either 3/

And after that, just one more report before the election; report on October won't come until Nov. 5. Even if that report is great, how much impact can it have? 4/

So here's the thing: as far as I can tell, Rs still counting on a boom to rescue Trump. But they're already out of time 5/

Ernie Tedeschi has more. At least two surveys suggest that July may be a blowout jobs month — in the wrong direction. By no means a sure thing, but the "rocket ship" recovery has semi-officially crashed 6/