Some managers are clearly great, some are clearly terrible. It’s quite easy to spot these extremes.

A thread of 7 Manager Anti-Patterns: 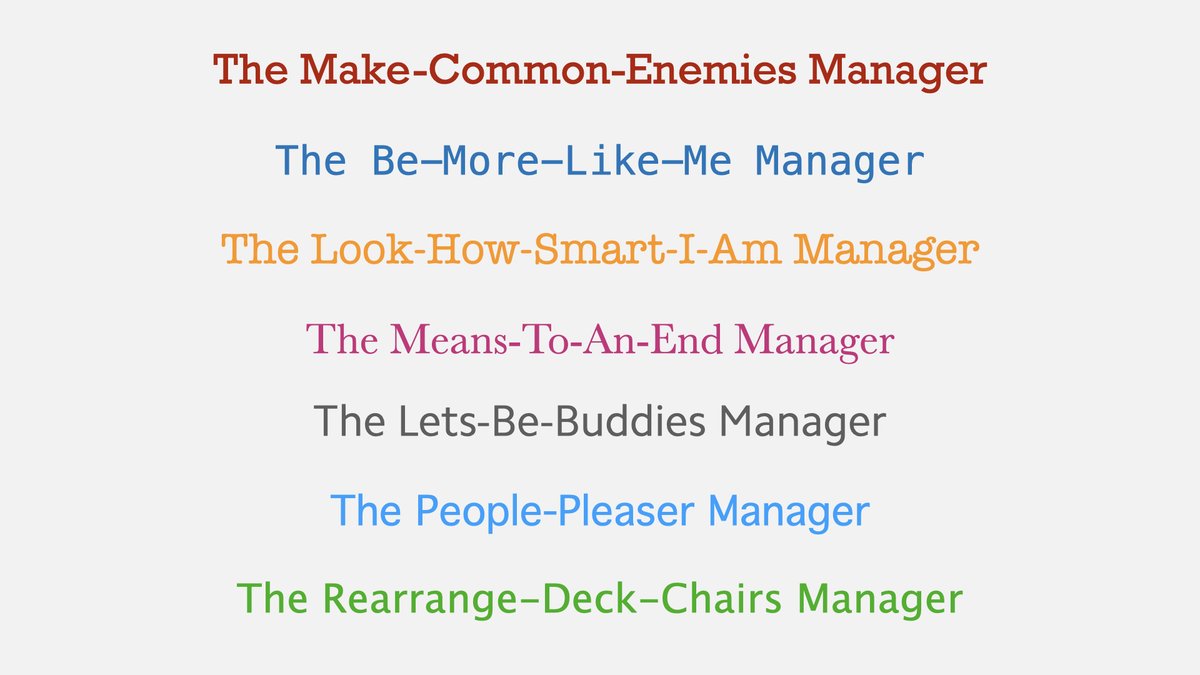 Loves talking about how certain other departments in the company are so incompetent. Can get very popular with team members as a result. Very poisonous for the org. Might not have overtly malicious intent, often just ignorant. Usually coachable

Usually someone who was very competent as an IC & hasn’t yet learned effective mentorship. Can be frustrating for team members who have different or complementary skills because much of the advice can be boiled down to “I used to just do X, Y, Z”.

Enjoys bringing up his team members’ flaws with trusted peers & with his own manager (“can you believe Alice said 𝘵𝘩𝘢𝘵 in a client meeting?”). Typically is not yet feeling secure in his own role as a manager & feels the need for validation.

Views team members as agents whose main purpose is to further his own goals & career. Very business-like in dealings. Achieves short-term results. Team is usually very unhappy. With charisma, may be viewed by company leadership as “top talent”.

A relationships-person who thinks that a good manager must be a best friend of his direct reports. Often is a strong advocate. Is problematic because usually not possible to establish same type of rapport with everyone on the team, makes favorites.

Treats pleasing peers & superiors as existentially important. Can be perceived as very collaborative & effective in some company cultures, but is bad for team members because will always prioritize pleasing peers/superiors over valid team interests.

An offshoot of #4, this is typically an org leader who often gets promoted without achieving actual results. Engages in constant process changes & org re-shuffles to demonstrate will & effort (& buy more time). Team suffers constant whiplash.

Now, I know these anti-patterns look “obviously bad” when framed like this. That should be no surprise, because that’s exactly what happens when we filter out organizational noise to understand the root causes, the modus operandi, & the pernicious effects of these behaviors.

And when we give a name to a collection of such behaviors, we make it much easier for teams & senior leadership to confront the issues & talk about the reality of the situation.

Related thread, on identifying problematic senior leadership archetypes during the hiring process (because preventing the problem > solving the problem)

Related, 3 tweets on picking the right manager (part of a mega-thread on PM leadership):

By popular demand after I posted this thread, here's a thread on Good Managers: