In response, sitting members of Congress publicly smeared me — and then denied me a chance to defend myself

The context was a special House Committee hearing to evaluate a Democratic proposal similar to the one proposed by Democratic presidential candidate Joe Biden, which would spend $2 trillion over four years on renewables and other climate programs.

Congressional interest in my testimony stems from the fact that I advocated for a Democratic energy proposal very similar to Biden’s between 2002 & 2009. Back then, the Obama administration justified $90 billion for renewables as stimulus, just as Biden’s campaign is doing today

But then, late in the hearing, Representatives Sean Casten of Illinois and Jared Huffman of California, both Democrats, used the whole of their allotted time to claim that I am not a real environmentalist, that I am not a qualified expert, and that I am motivated by money.

Had I been allowed to respond, I would have noted that: I have been a climate activist for 20 yrs; my book‘a been praised by leading environmental scientists; the UN IPCC recently invited me to serve as an expert reviewer; & I’ve always been financially independent of industry.

But I wasn’t given the chance to say any of that. After Casten and Huffman lied about me, Rep. Garret Graves asked the committee’s chairperson, Rep. Kathy Castor of Florida, to let me respond. She refused and abruptly ended the hearing.

What, exactly, had I said that was so dangerous as to lead Democrats to engage in character assassination and undermine liberal democratic norms? Nothing I hadn’t already said last January when I testified before Congress about climate change and energy.

Back then, I testified that climate change is real but isn’t the end of the world. I pointed to the physical reasons renewables can’t power industrial civilization. And I noted that abundant nat gas & nuclear, not solar and wind, have been the big drivers of emissions reductions

I further made the case that climate change was distracting us from a far greater and more urgent threat, which is the global domination of nuclear energy by China and Russia, which could be disastrous for US interests and the future of liberalism and democracy around the world.

Nations that partner with Russia or China to build nuclear plants are absorbed into their sphere of influence. The line between soft power and hard power runs through nuclear energy. On the one side is cheap & clean power. On the other, a stepping stone to a weapons program.

During the hearing, several Democratic members claimed that renewables today are cheaper than existing grid electricity. But if that were true, I replied, why do solar and wind developers require hundreds of billions of dollars from American taxpayers in the form of subsidies?

Democrats are basing their climate agenda on what California did. But California’s electricity rates since 2011 rose six times more than they did in the rest of the US, thanks mainly to the deployment of renewables and the infrastructure they require, such as transmission lines 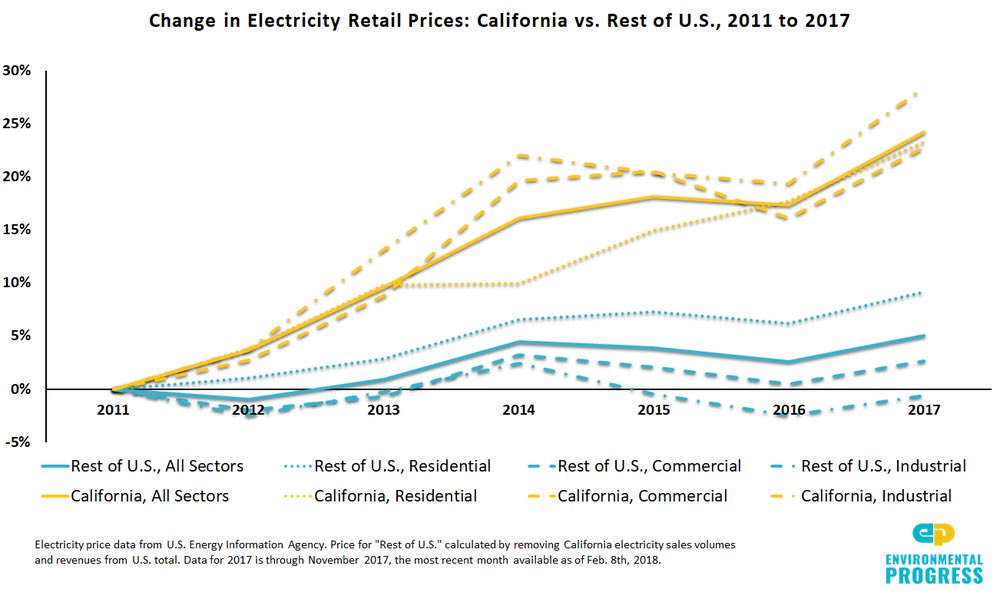 A report finds 200 human rights violations when renewables projects were imposed on poor communities. In Hawaii & Nebraska, indigenous leaders are resisting wind projects that threaten birds, including the whooping crane, whose number one cause of mortality is transmission lines.

Renewables also hurt working people by raising the cost of electricity for industries that offer good jobs with high pay. From 2011 to 2018, California’s industrial electricity prices rose 32 percent, while the average price in the other 49 states fell one percent.

The good manufacturing jobs in renewables are mostly in China, which makes most of the world’s solar panels, including America’s, while the US is stuck with temporary low-wage service jobs installing solar panels and wind turbines, and doing energy efficiency retrofits.

By contrast, nuclear power plants, which can operate for 80 years or longer, require high-wage, high-skilled, and permanent jobs for multiple generations.

What’s going on? Why do Democrats, who imagine themselves to be on the side of working people and the poor, advocate for renewables and against nuclear?

It’s hard not to notice that some of the Democrats’ largest donors, including Tom Steyer and Mike Bloomberg, are renewable energy and natural gas investors. Even one of my main antagonists, Rep. Casten, was a renewable energy investor before joining Congress.

Democratic interest in subsidizing renewables comes at a time when industrial renewable energy projects are being blocked around the world, as even their boosters now admit. “Biden plots $2tn green revolution but faces wind and solar backlash,” @guardian

And on Monday, a new coalition of community and environmental activists formed the Energy and Wildlife Coalition to block industrial renewable energy projects around the world

The last time Democrats spent big on renewables, during the 2009 green stimulus, 10 members of former President Barack Obama’s finance committee, and more than 12 of his “bundlers,” benefited from $16.4 billion of the $20.5 billion in stimulus loans, as I note in my new book.

Steyer, Bloomberg, and many other renewable energy investors also donate hundreds of millions of dollars to groups like the Sierra Club, which turn around and lobby for more spending on renewables, and for the closure of nuclear power plants.

A federal indictment in 2016 alleged that Competitive Power Ventures and the Cuomo administration both recognized that if Indian Point were taken offline, it would be replaced by natural gas, not imported hydro and wind, as Democrats had claimed

Democrats have worked to shut down nuclear plants and replace them with fossil fuels and a smattering of renewables, since the 1970s, as I note in Apocalypse Never.

Now, if the Democrats’ $2 trillion subsidy agenda passes into law, powerful people stand to make a lot of money, from winning tender for industrial projects, such as building wind turbines & transmission lines, to the outright cash payments we saw during Obama’s green stimulus.

In the end, the war on nuclear energy threatens more than political corruption & higher emissions.

At a time when China is committing a potential genocide against its Muslim citizens, and Russia’s president is expanding his domestic and international powers, the US should not allow these two nations to dominate nuclear power plant construction.

If the US keeps closing nuclear plants and fails to build new ones, we will cede our ability to compete with the Russians and Chinese in building new nuclear plants abroad, which will undermine national security, and good industrial jobs at home.

The threat posed by America’s illiberal, nuclear-building rivals will, like the crisis facing renewables, continue to grow, regardless of whether Democrats succeed in shutting me up.