Wow. A lot to digest here. But reading new Senate Intel report about Paul Manafort's relationship with Konstantin Kilimnik, a Russian intelligence officer, & who should pop up but Frank Mermoud. This has never been properly explored. But Mermoud is Arron Banks's business partner 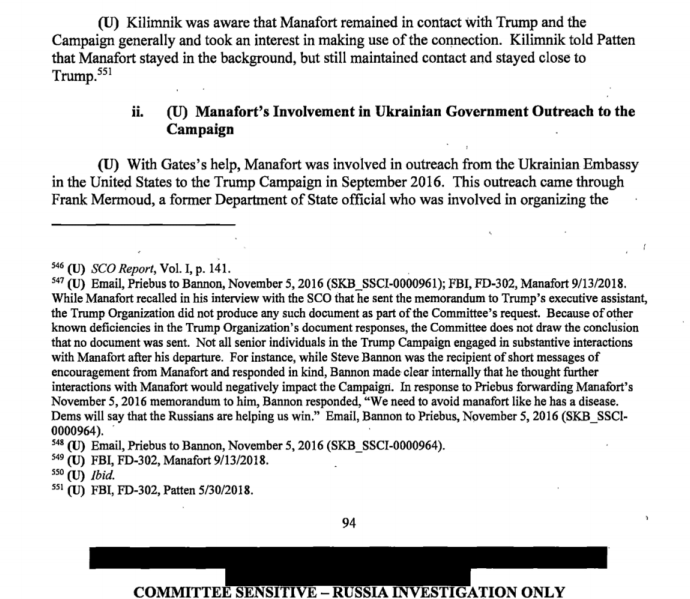 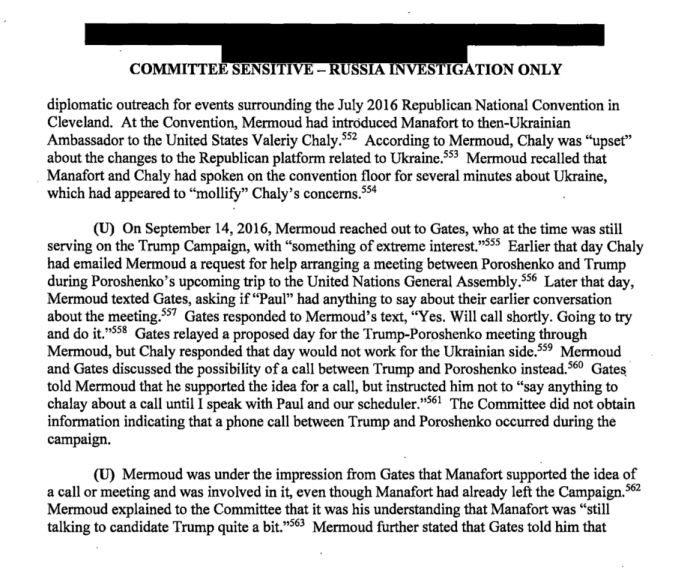 Mermoud is described as doing 'outreach' for the Ukrainian government including at the RNC convention in 2016 (which Farage attended), making introductions to Manafort & Ukrainian officials & trying to set up meeting between Trump & Ukrainian president 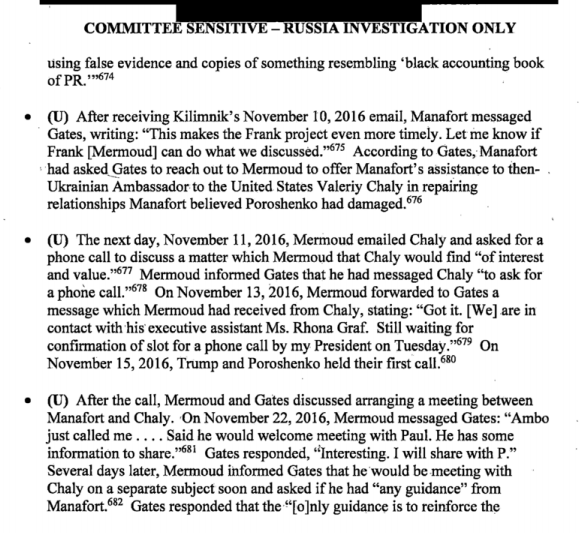 I'll et into the Ukrainian connections in a bit but first some background. Kilimnik has long been considered a suspected spy. But this report states it as fact. Kilimnik was long-time business associate of this guy, Sam Patten. And they're both close associates of Manafort..

More context. Sam Patten, whose business partner is a Russian spy, worked for Cambridge Analytica. He was a contractor who worked on US mid-terms in 2014 & on this partic dirty campaign in Nigeria in early 2015 in which they worked with Israeli psyops firm
https://www.theguardian.com/uk-news/2018/mar/21/cambridge-analyticas-ruthless-bid-to-sway-the-vote-in-nigeria …

So, just to come back to Arron Banks. Frank Mermoud showed up on one of his numerous companies 'Precision Risk & Intelligence' in summer 2018. A bit of an oddity. 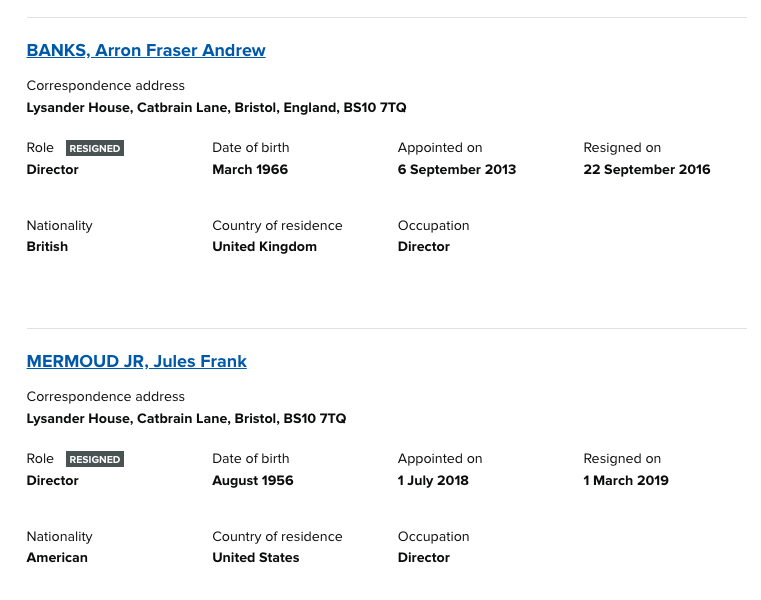 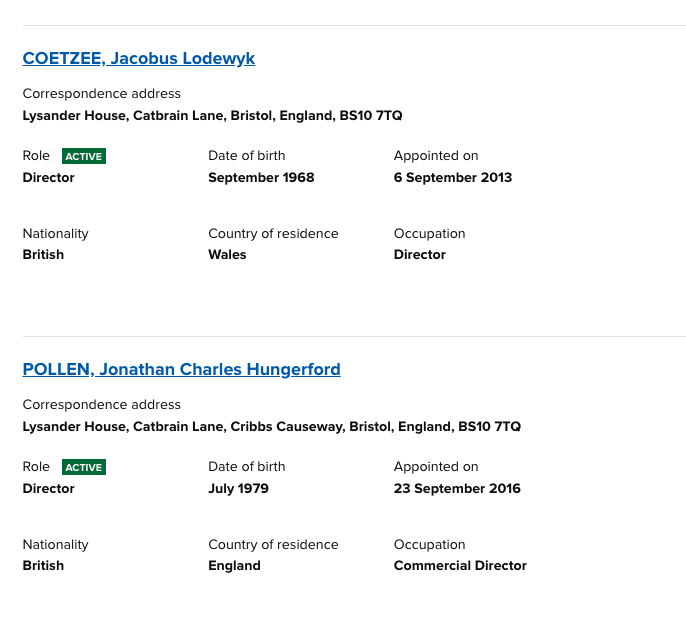 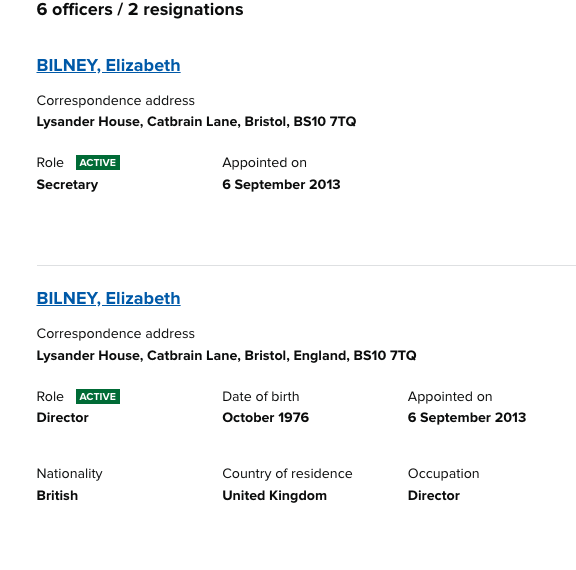 This was what we knew about him at the time. He was a key figure at July 2016 GOP convention & had strong ties to Ukraine. Later he oversaw diplomatic corps for Trump inauguration run by Tom Barrack
https://www.theguardian.com/us-news/2016/jul/30/donald-trump-paul-manafort-ukraine-russia-putin-ties …

(Side plot: Banks's ally in LeaveEU, Richard Tice? His business partner at one time was Tom Barrack. As @wendysiegelman has pointed out on here fairly regularly)

Right. Back to the juice. Here's the report stating categorically that Kilimnik is a a Russian intelligence officer. With 'close lasting relationship' with Manafort 'that would endure to 2016 US election & beyond'. Note the references to Deripaska. Lots of UK links there... 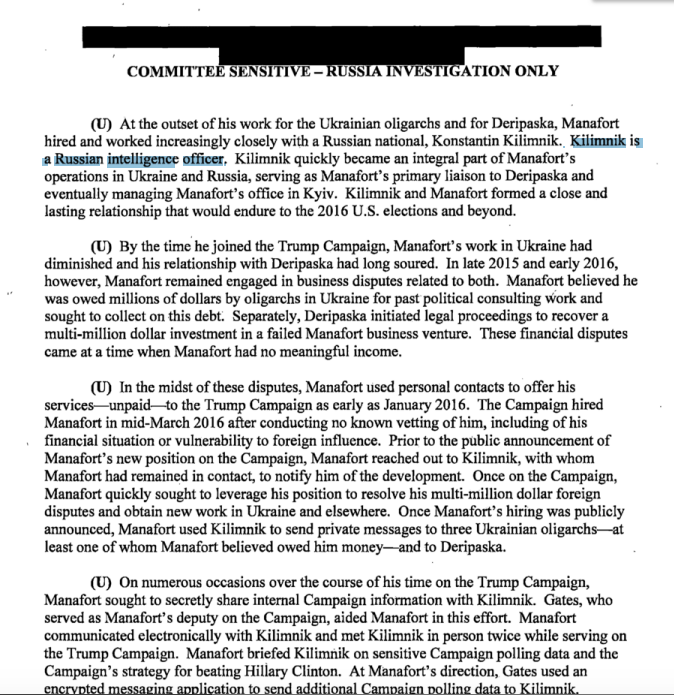 Oleg Deripaska who is *all over* this report has faced stiff sanctions in the US. Not in Britain tho! Here he owns his very own lord. Step forward Lord Barker, chair of EN+. Oh & don't forget how he got all cosy with @George_Osborne on that yacht..
https://www.dailymail.co.uk/news/article-2215371/Yachtgate-nearly-sunk-George-How-jolly-oligarchs-boat-poison-plot-spectacularly-backfired-Chancellor.html …

Oops, messed up thread. So, we're getting there: 'Following the election, Manafort worked with Kilimnik to undermine info showing that Russia interfered in 2016 US election'

So, before I get back to Mermoud. The report has extensive detail on Manafort-Kilimnik's close relationship in Ukraine. Plus a reminder about how how deeply the British establishment runs through this story. Here's Nat Rothschild who was also on that yacht with Osborne & co

And here's an interesting footnote. Sam Patten was recruited by Kilimnik to run what the report describes as a Kremlin-funded influence operation in Ukraine at the same time he's working for Cambridge Analytica.

Another cul-de-sac but may as well mark the appearance of Dmytro Firtash. Indicted oligarch, ex-biz partner of Manafort...AND Jack Wakefield - brother of Mary married to Dom. He's a director on his foundation. No, no-one has any idea why or how 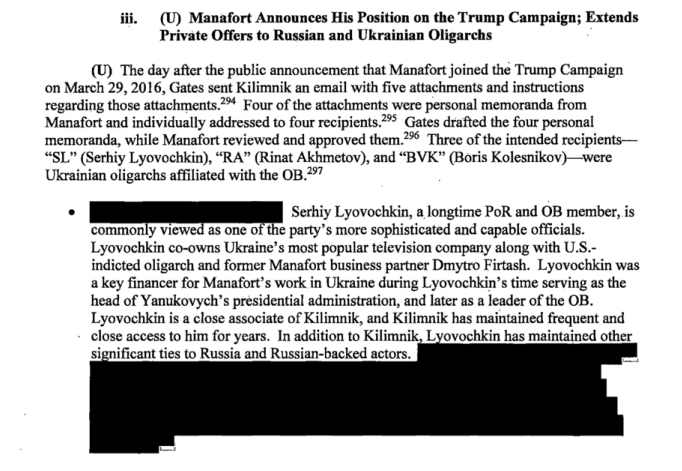 Well, here's another interesting tidbit. There's a lot of detail about the polling data Manafort was passing to Kilimnik, the Russian spy. The report has new info about how it was coming from Anthony Fabrizio, a long-time Manafort associate. But fascinating detail incoming... 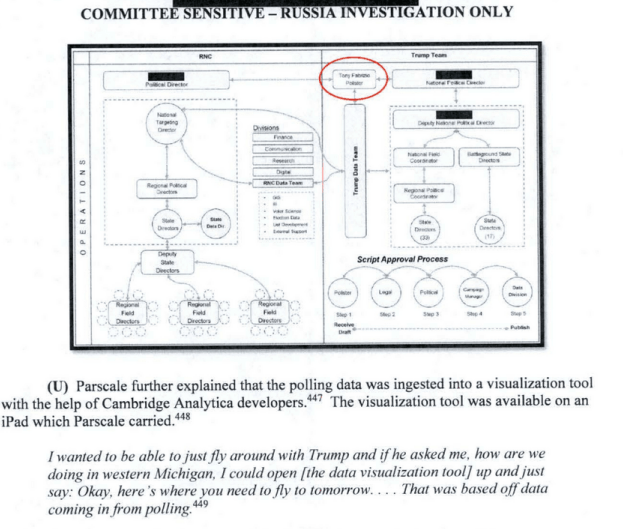 Gosh. There's so much here. I always thought this stuff about the polling data was likely red herring, but look at the detail & the importance they put on it. And what was 'the sensitive stuff'?!? Notice the footnote, 'Manafort refused to elaborate further on the sensitive stuff' 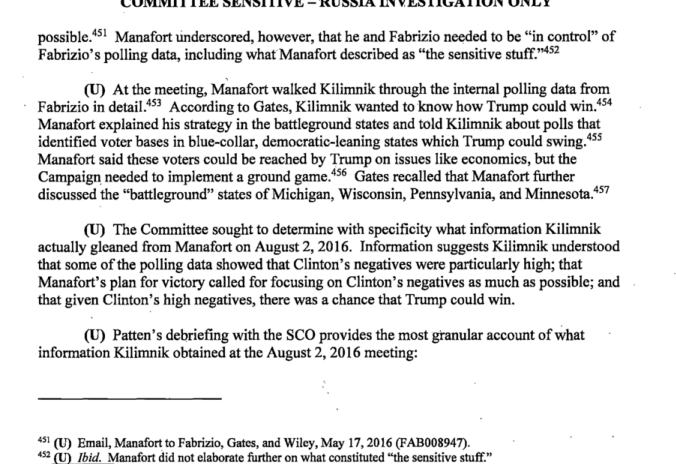 Right. One more point before I get to dramatic entree of Arron Banks's biz partner. Manafort resigns on Aug 19 when NY Times reveals his secret Ukraine payments. I'll come back to this later. Report notes Kilimnik still tight with Manafort & Manafort still tight with campaign 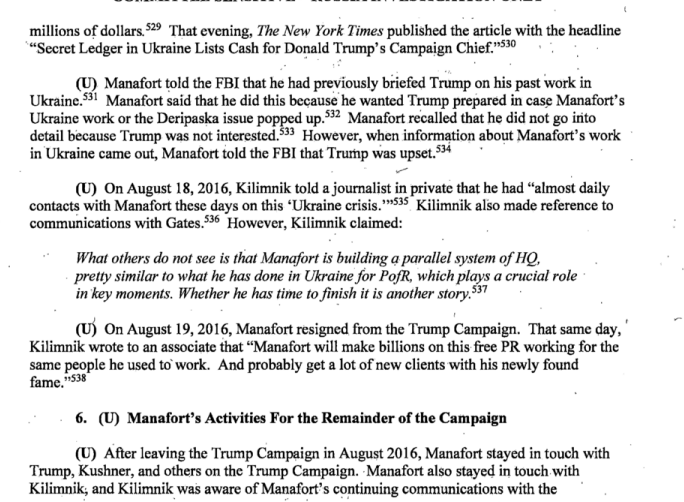 Enter Frank Mermoud, who, at some point after this, became Arron Banks's business partner. Mermoud reaches out to Manafort on behalf of the Ukrainian embassy 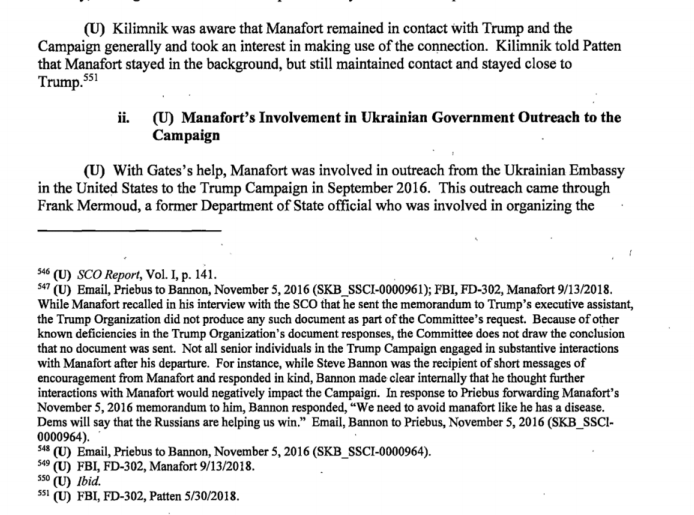 Apologies. I had to break off to gently despair. Four years & not a single UK investigation into any part of this.

So, it was at RNC convention in 2016 that Trump's language on Russian invasion into Ukraine changed. Mermoud introduced the Ukrainian ambassador to Manafort at the convention who was 'upset' and who Manafort tried to 'mollify'

Mermoud then reached out to Rick Gates 'with something of extreme interest'. And tried to fix meeting between President Poroshenko & Trump 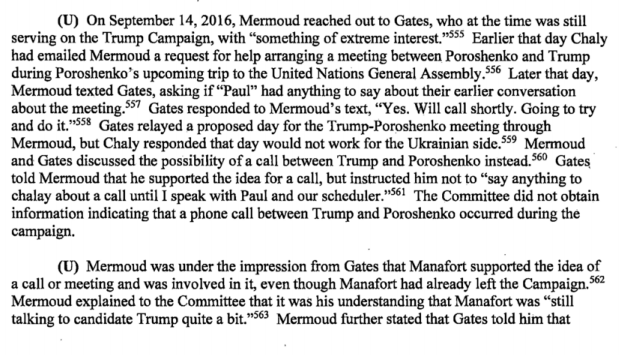 Manafort & Kilimnik 'secretly co-ordinated' with Kilimnik seeking to leverage Manafort's contacts with Trump administration specifically with regard to 'the Ukraine plan'. Report says he passed messages from pro-Putin ex-Yankovych to Manafort on 'plan to resolve Ukraine conflict'

So, it's pretty extraordinary. The pro-Kremlin ex-president Yankovych has come up with a plan. He's trying to get the current president Poroshenko to agree to it. And he's using Manafort as the key to push Trump into doing it 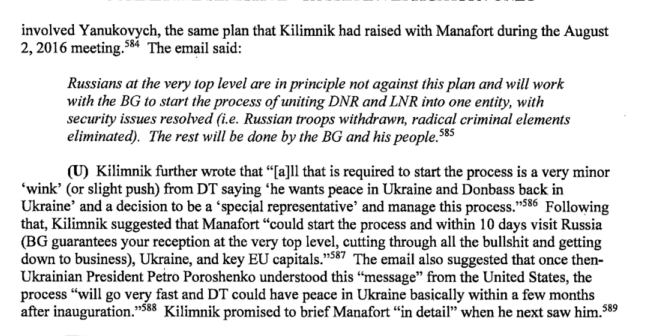 Mermoud is about to re-appear but first this line is important. 'Kilimnik almost certainly arrange some of the first public messaging that Ukraine interfered in the US election.' And he did so via an FT journalist in Kiev...

Re-enter Frank Mermoud. 'After receiving Kilimnik's Nov 10 email, Manafort messaged Gates, 'This makes the Frank project even more timely.' Manafort then got Mermoud to set up call between Trump & Poroshenko. OMG this is so nuts. This is the Kremlin's plan. Which they've executed 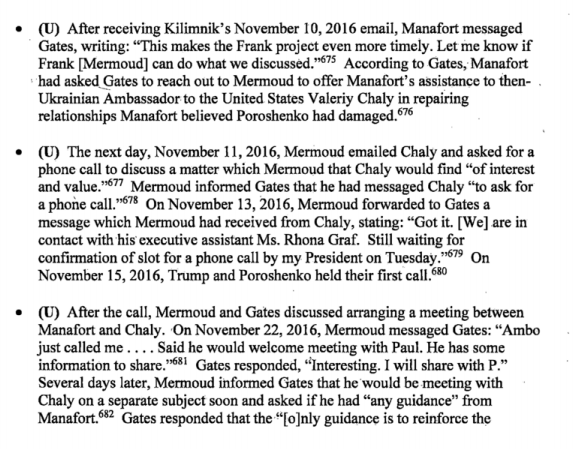 NOTE: 'Beyond a brief readout of the call provided by the Ukrainian government, the substance of the call is unknown'

Mermoud then sets up a meeting between Manafort & the Ukrainian ambassador. The ambassador has 'information to share'

Fast forward to 2018. Kilimnik & Patten have developed a plan for eastern Ukraine. And Manafort is trying to get the same guy who he got the Trump polling data from to do polling in Ukraine.

There's just so much here that's relevant to UK. 'Oleg Deripaska has acted as a proxy for the Russian state & Russian intel services...he's directed active measures...to install pro-Kremlin regimes across the globe'

He owns a lord! He's holidayed with George Osborne! 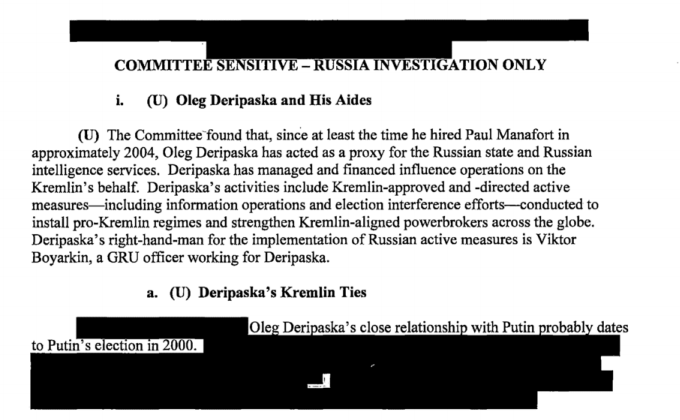 I can't go on for much longer. But if you want to know why #RussiaReport was suppressed, see this as just one eg. Deripaska asked Nat Rothschild to create a phony job for Chernukin - yes that Chernukin, the one who gave £££ to Boris Johnson - to get a visa
https://www.thetimes.co.uk/article/rothschild-s-uk-job-offer-helped-russian-get-visa-6gjntpxgp …

A couple more things. Mermoud is also a director of another of Banks’s companies, his new cannabis oil/iodine outfit, Iofina. New fact: Lord Ashcroft also seems to be involved. 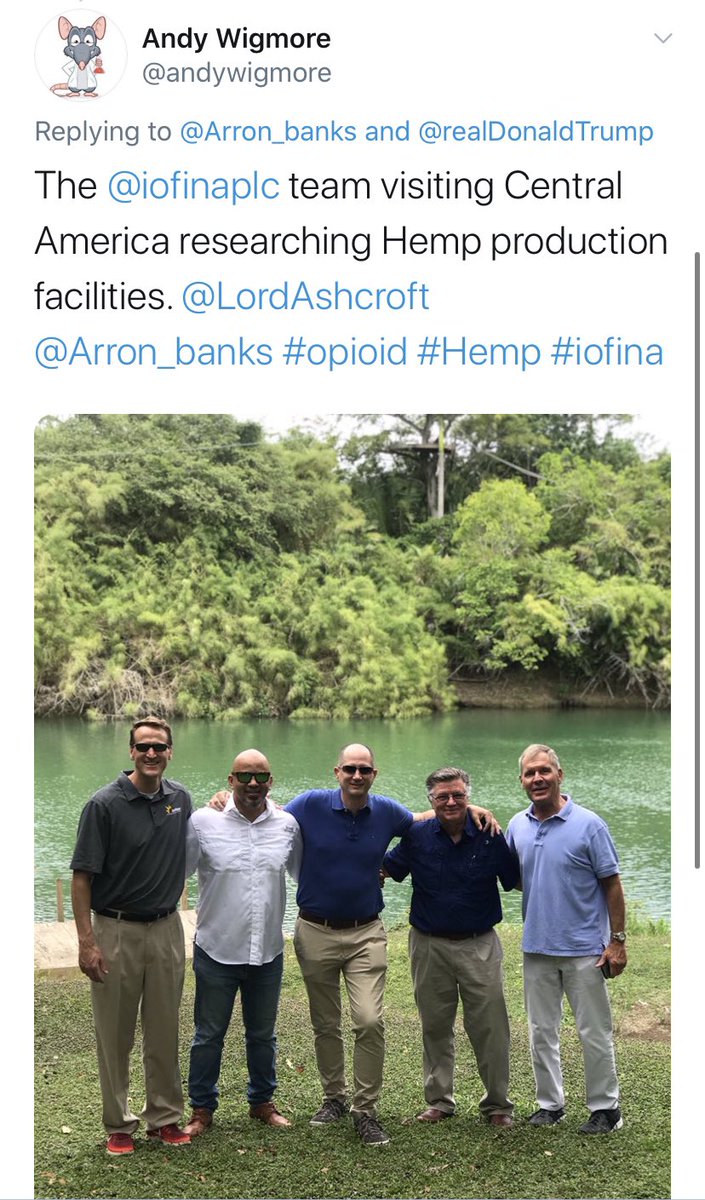