Two extraordinary stories collide this week. The Senate Intelligence report on Russia. And the deeply sinister poisoning of Navalny. And there’s a figure who connects them both. And us: Oleg Deripaska.

You need to watch this video. And I’ll explain..

Navalny isn’t just the main opposition figure in Russia. He also does extraordinary investigations into Kremlin corruption & is a gifted storyteller. The video is in Russian but has subtitles & tells an amazing story with footage taken on Deripaska’s yacht
https://www.rferl.org/a/russia-deripaska-prikhodko-rybka-nuland-yacht/29028148.html …

So many disturbing aspects to this. Deripaska was named in Senate’s report as proxy of the Kremlin who conducts influence operations abroad. There are pages & pages about him & his associate a Russian intelligence officer & their r’ship with Trump’s campaign manager Paul Manafort

Oleg Deripaska was clearly involved in Russia’s attack on US election. That’s what the report says. And in this video from 2018, Navalny exposes what he says are Kremlin bribes.

And there were repercussions. Especially for the woman who took the video
https://meduza.io/en/news/2019/01/18/i-don-t-want-to-go-anywhere-video-surfaces-of-nastya-rybka-s-arrest-in-sheremetyevo-airport …

There’s so much more to this because in the video, there’s an explosive reference to Deripaska interfering in US election (explosive in 2018). She also claimed to have hours more evidence. This is how the Russian govt responded at the time, by blocking Navalny’s website 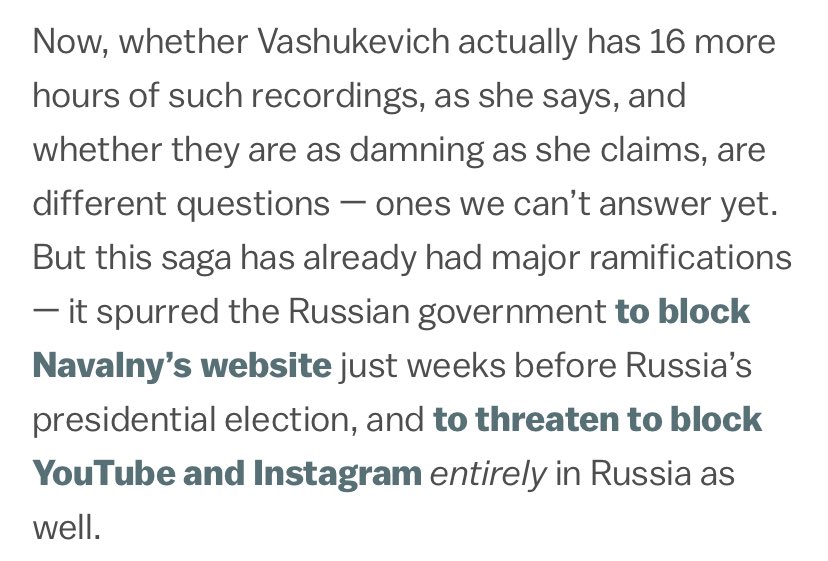 Two huge news events in US & Russia. An unequivocal finding of Russian interference in the US election. A poisoning of the Kremlin’s biggest critic.

...& here in Britain, total silence. Yet this same oligarch has links to heart of UK establishment
https://www.dailymail.co.uk/news/article-2215371/Yachtgate-nearly-sunk-George-How-jolly-oligarchs-boat-poison-plot-spectacularly-backfired-Chancellor.html …

Deripaska funnels Kremlin money into foreign elections. That’s what the report says. It says he is directly involved in Russia’s attacks on Western democracy. And this is exactly what we know he tried to do in Britain where he still has a house & business

The man who tried to expose Deripaska’s relationship with the Kremlin is fighting for his life. The US Senate has unequivocally named him as a key player in the attack on US democracy. And in Britain? Silence & £££