1/ I gave 2 divrei Torah on #KiTavo over Shabbas (to my captive audience family) & I thought I'd share them here.

First, of course, to explain: nearly every dvar Torah I've given since 2016 has been about the "Matzav", the #TrumpCrisis

How could I not?

2/ Trump (ym'sh) & his cult are pure evil, everything the Torah is against, everything the neviim warned us about, a violation of all the rules of life, kavod/respect & peace... and yet 70-80% of frum Jews support him & his organization.

The avoda-zara of Trumpism is a deep sin

3/ Any frum Jew, esp. rabbis, who support Trump (ym'sh) require teshuva, selicha and kappara. So before the yomim noraiim, I need to preach teshuva.

What's harder, for me, as a rabbi & therefore a representative of my people to Hashem, is how to argue we should be saved on YK

4/ I'll discuss later the task of how I act as a defense attorney for my community on Kol Nidrei night.

Moreover, how to repair the grave sin of the frum community during the #TrumpCrisis is beyond my abilities while they cling lovingly to the sheretz.

5/ I need to step carefully b/c of the mitzvah of Toechaha (Lev. 19:17; see  https://www.halachipedia.com/index.php?title=Mitzvah_of_Rebuke … &  https://www.sefaria.org/Sefer_HaChinukh.239?lang=bi …) - rebuke. A bad rebuke will make my friend dig deeper into their sins.

Again, this is a deeper subject to discuss later

We have 2, here & in Bechukotai, b/c both are the final stages of the covenant process. Once the rules are taught, there's boilerplate warning to signatories abt violation

7/ I'm a devoted student to Rabbi Menachem Leibtag (I was one of two editors of his parsha sheet when I was in Gush 1995-6), so see his shiurim on covenant structure to understand the pattern. e.g.  https://tanach.org/dvarim/dvarim/dvarintr.htm …

It's mind-blowing when you see it. It's an all-positive tochecha. 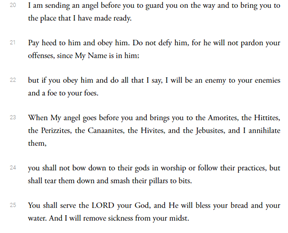 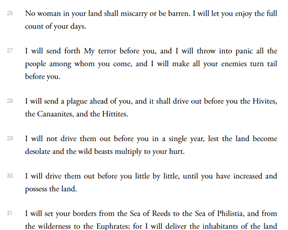 Ex. 23:25 "He will bless your bread and your water... remove sickness from your midst. 26 No woman in your land shall miscarry or be barren. 27 I will send forth My terror before you, ... and I will make all your enemies turn tail before you."

11 The LORD will give you abounding prosperity in the issue of your womb, the offspring of your cattle, and the produce of your soil...

12/ But the 1st, all positive, Tochecha didn't work. So the 2nd one needed more negative. However, I believe it started out in the same tenor, as all positive. The 2nd tochecha, first section, is right before the 2nd tablets are written, in Parshat Ki Tisa

13/ The mini-tochecha in Ex. 34 is also largely positive & any negatives are couched and hinted at.  https://www.sefaria.org/Exodus.34?lang=bi&aliyot=0 …

In this sense, I posit the 13 Middot are part of the 2nd tochecha.

14/ But the 2nd Tochecha, called the 1st by nearly everyone else (sorry) is familiar in that it is almost entirely negative. And scary. And yet it did not prevent the sin of the spies.

So the Ki Tavo one is even longer. A greater description of the horrors of violating the brit

15/ This sets up the pattern, though. Because the Book of Judges shows that the Ki Tavo tochecha didn't work either. The sins described there feel even worse than the ones from the Spies and Calf

Pilegesh at Giva'a is pretty much our lowest state.

And that doesn't work.

This is the pattern. My teachers actually used the Eliyahu vs Elisha contrast to teach it.

17/ Eliyahu ha-Navi faced the sinners at Har Carmel and used amazing miracles to force the people to do teshuva. It worked for, like, 5 minutes.  https://www.sefaria.org/I_Kings.18?lang=en …

The methods of his student, Elisha, were miracles of charity & comfort (let's ignore the bears, please)

18/ This is a cursory view to show that the horrors of Ki Tavo didn't work to stop sin. Why? Peering into myself, I see why I persist in sin: because I don't think the warning applies to me. I don't *see* myself as a sinner.

Without knowing myself, the warning is useless.

19/ Dire words of future punishment wash over me, b/c of my self-regard: "Surely, I'm not who God is talking abt"

I chuckle, even, at the poor saps who will get punished.

20/ Tochecha, teshuva, cannot work without knowledge that you are sinning. Almost every RedHat frum Jew I know believes they are utterly virtuous BECAUSE of their rejection (pwnage?) of the dastardly liberals and thus their devotion to the ideals of Trump (ym'sh)

21/ The period of #Elul needs to be spent in the awareness of our sins. First we need to be comfortable in knowing we are often wrong. Incorrect.

Without the ability to peer into ourselves and accept (self) criticism, we are doomed.

So many people need therapy, my God

22/ Anxiety over accuracy, an inability to accept that you've hurt others, that you steal, that you are indifferent to injustice... these are emotional maladies and therapy will help.

Mental health *is* a medical necessity.

Accept that & then move on to understanding yourself.

23/ Another step in teshuva: We must dwell on the consequences of our actions, not intentions. Good intentions are exonerating only in sins against God, not for sins against our fellow.

"Meaning well" while you condemn others to the ICU or homelessness... not a defense

24/ The 3 Tochechot didn't work because the task of teshuva is one of the mitzvot that needs to be done first. Knowing we tend to selfishness, cruelty, indifference... this self-knowledge allows us to then accept the terrible curses as support for forbearance.

24b/ (I have more, but Twitter is forcing me to send these before I can add more to the thread. Be back soon)

25/ The second Dvar Torah is relatively simple. It's an observation that maybe the curses in the Tochecha aren't a litany of divine punishment but a prediction of the consequences of an evil society.

This is wisdom hard won through 2020 & the #TrumpCrisis

26/ If I said in 2016 that electing Trump (ym'sh) would bring a divine curse of hundreds of thousands dead from plague, millions infected with many of them on to suffer lifelong injuries, innocent people gunned down & tortured by agents of the state...

27/ Our military targeted by our enemies & left defenseless, tens of millions out of work, millions losing homes & health-care, the most vulnerable population - refugees - being tortured & their children imprisoned... oh I could go on

Is this a curse, or a consequence?

28/ All of the curses are a result of open sin. Sins of cruelty, of theft, of lust for another's property & power, of utter hatred for people who look different.

It didn't need to be this way. It's all come about because too many people in America are filled with hate & cruelty

29/ Our Biblical landscape of terror is a direct cause of sin. Sins against humanity, but also sins against God. Wearing a RedHat feels like worshiping a golden calf. It's a violation of the most basic principles. The chillul Hashem is soul-shattering

30/ So Hashem tells us repeatedly in Chumash & Tanakh: sin is bad because it's against My love, My peace. It's also terrible for you in your world.

We say certain mitzvot give us long life in this world & the world to come. Honoring parents, for example.

31/ Wearing a mask to save the lives of the elderly... honoring our parents? It's a consequence, not just a curse.

I look at the sins of the generation of the flood this way. They destroyed the earth (climate change, anyone?) through rapine & selfishness. Chamas.

32/ So someone who's devoted to Hashem from love not fear, someone who does mitzvot from duty not because of reward & punishment can hear the Tochecha differently from those who simplistically need a lotto ticket to do the right thing

33/ The simple Fear-worshiper needs to know they'll get fat sheep & fat crops if they follow the Torah or else they'll get horrible punishments (like plague, war, recession)

God lovers can read the Tochecha like we read all of Torah: telling us truth. Sin leads to hell on earth

34/ BTW, this is the truth behind Sherman's phrase: "War is Hell" ( https://en.wikiquote.org/wiki/William_Tecumseh_Sherman …) & the fabled Four Horsemen ( https://en.wikipedia.org/wiki/Four_Horsemen_of_the_Apocalypse …)

War brings all the worst parts of Hell onto our earth. War *leads* to pestilence, famine & death.

35/ Look at America in 2020! An evil government, led by pagan thieves, haters of humanity, declared war against the Blue States and Blue People

36/ Those are the two quick talks. Ki Tavo is read 2 weeks before Rosh Hashana on purpose (see MT Tefilah 13:2,
https://www.chabad.org/library/article_cdo/aid/920178/jewish/Tefilah-and-Birkat-Kohanim-Chapter-Thirteen.htm#v2 …)

We have 2 weeks to prepare ourselves for the Tochecha in Elul, 2 weeks to absorb it before RH.

37/ Rosh Hashana is supposed to be the end of the teshuva process, because it's the final exam. We're to appear before God, declare God king, as fully presentable people.

God's mercy to the Jewish people is to allow us a 10 day makeup period until Yom Kippur.

38/ But all humanity is judged on Rosh Hashanah, we are all present as equals, marching single file to be counted & evaluated. #Elul is the time to do teshuva.

39/ While I risk alienating sinners with any rebuke, it's not beyond any person to inspect themselves, to determine if they know how to accept criticism. Trust God's mercy and take the plunge... after you release the sheretz in your hand

Shana Tova to both you robots.