Growing up in Toronto, I was obsessed with Crad Kilodney, a self-published weird-fiction author who'd stand on street corners selling his chapbooks with a sign hung around his neck reading PUTRID SCUM or FAMOUS CANADIAN AUTHOR BUY MY BOOKS. 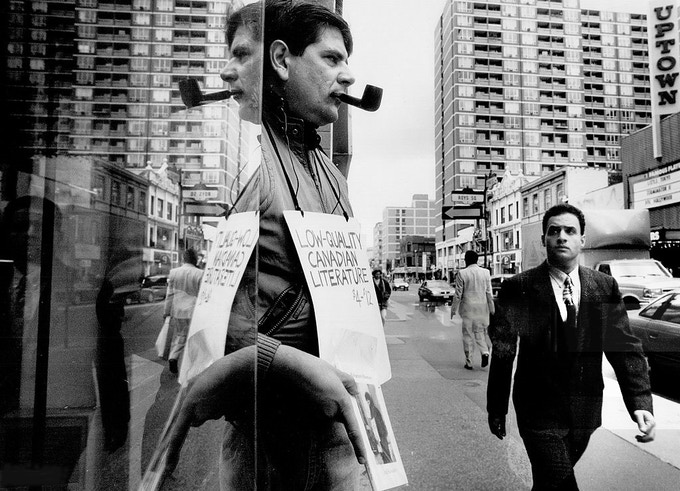 I used to stop and chat with Crad, who was out on Yonge Street every day, winter and summer, taking shit from drunks and yahoos, conversing with teens with literary ambitions, selling his books.

(And, it turned out, secretly recording his conversations and making highlight cassettes of the most absurd, abusive conversations he had).

He was a performatively grumpy, amazing, weird, fantastic guy, and say what you will, he suffered for his art.

He died, as it happens, one WEEK before he was scheduled to be interviewed for PUTRID SCUM, Anthony Stechyson's documentary about his life.

Deprived of his principle subject, Stechyson did not give up: instead, he made a posthumous doc, talking to writers and others who were moved and influenced by Crad, and now PUTRID SCUM is up on Kickstarter, raising $23k to finish it.

It's the kind of amazing thing that you get through crowdfunding: how else would you get a doc about a dead guy who made his bones standing on a street corner with a sign that says WORLD'S WORST POETRY?

$6 gets you streaming access, $40 gets a DVD, $60 gets the DVD and reissues of Crad's autobiographical novels EXCREMENT and PUTRID SCUM.

I was delighted to be interviewed for it (as was Margaret Atwood!), and I'm even happier to back it.