Today in @thebookseller - the UK's trade magazine for the bookselling industry - I published "Inaudible," in which I unpack my reason for foregoing hundreds of thousands of dollars by refusing to allow Audible to put DRM on my audiobooks. 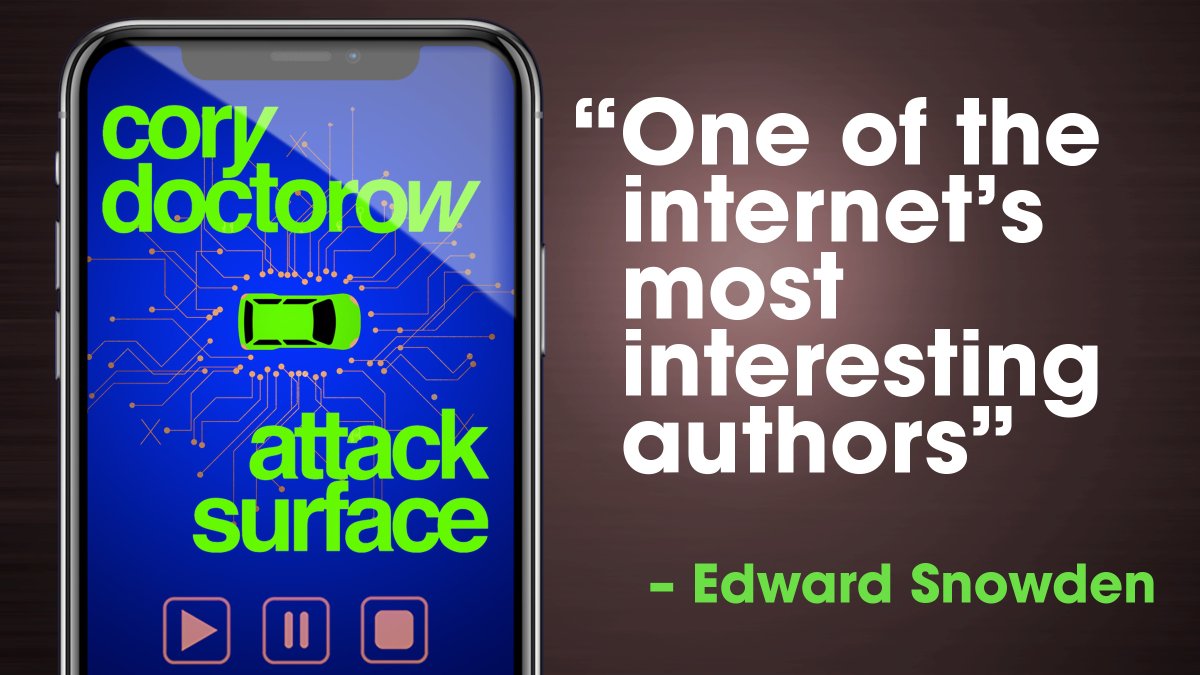 DRM isn't hard to break (just google "break audible drm" if you don't believe me!) but it IS a felony to traffick in tools that break DRM. That means that the DRM that Amazon forces on creators and publishers in the name of "protecting" them does nothing of the sort.

But it DOES lock their works to Amazon's platform...forever.

Labor economists talk about "chickenization" in markets where there is a "monopsony" - that is, where a single seller controls access to the market.

The phrase comes from the US poultry industry, where three monopolistic companies have divided up the country so that (nominally independent) chicken farmers have only one processor who'll buy their birds.

Big Chicken uses this advantage to squeeze suppliers: chicken farmers are told what kind of coop to build, which chicks to buy, what feed to use, which medicines to dose, even when the lights go on and off.

Some farmers are unwitting subjects in experiments - Purdue might decide to test the effect of a different feeding regime and order a farmer to apply it.

When this is done, the farmer sells their birds to the monopolist, who unilaterally names a price: the monopolists use their extensive data-gathering to titrate the money-drip so farmers have just enough to continue for another year, but not enough to get ahead.

Farmers who complain - especially to regulators and lawmakers - are shut out of the market...permanently. One farmer went into the coop-maintenance business and the meat packers told suppliers that if they hired him, they'd be blackballed, too.

It's no wonder that farmers are one of the worst-off groups in the US for "deaths of despair" (suicide and overdose).

Amazon's use of DRM is a key component in its campaign to chickenize publishing, of course.

But it's not just publishers and writers who suffer here - readers get a raw deal from DRM, too.

Recall that in 2009, Amazon remotely deleted purchased copies of 1984 from readers' Kindles, due to a complaint from the Orwell estate (you can't make this up!)

In 2019, Microsoft decided to get out of the ebook business and "deactivated" every book they'd ever sold, rendering them unreadable.

Both companies offered refunds, but come on.

From my editorial: "I was a bookseller for years and once I sold you a book, it was yours. Nothing - not a claim from the useless professional descendants of a long-dead writer nor the callous indifference of tech execs in a Redmond boardroom...

"...could compel me to come over to your house and take the books back. And if I did, it would not be okay, not even (and I can't stress this enough) if I gave you your money back."

Bookselling and books are older than DRM (hell, they're older than copyright!). Publishers, booksellers and readers have a (literally) ancient compact. The idea that tech monopolists get to wave a lawyer's pen and declare it null and void is, frankly, bullshit.

It's unacceptable. So I don't accept it. And that's why I produced my own audiobook and am selling it direct, first through the Kickstarter campaign for presales, and then through all the retailers EXCEPT Audible.

I'm well on the way! My Kickstarter is about to hit the $100K mark after 48 hours. You can help me demonstrate the viability of an anti-monopoly way of doing audiobooks by backing it (and if you already have, THANK YOU!)