When I launched a Kickstarter campaign to crowdfund pre-orders for the audiobook of Attack Surface (the third Little Brother book), I threw in a couple of REALLY big-ticket rewards, more or less on a lark. 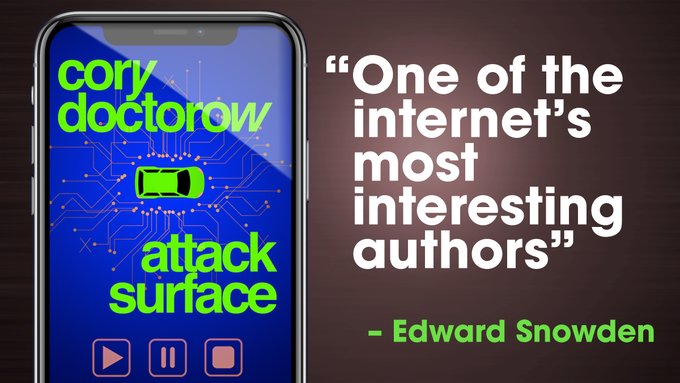 For $10K, you could commission a Little Brother story: I'd write a story based on an mutually agreed-upon prompt and try to sell it, and make sure your name was mentioned in any eventual sale.

I set up two of these thinking they'd never sell.

They sold in three days.

So I emailed my agent and said, "Hey, look, if three more people commission stories and I write 'em and sell 'em to magazines and whatnot, do you think someone would publish the whole thing as a collection?"

So here we are! I've just made three more commissions available on the Kickstarter. If you've got $10K and want to help birth another Little Brother book - a short story collection, title to be determined, this is your chance!

And if you don't want to spend $10K (which, you know, FAIR ENOUGH), your $15 pre-order of the Attack Surface audiobook and/or $14 ebook (or $25 bundle) will make a gigantic difference, not just to me, but to competition and authorship:

Also, if you're already a backer, I've got some errata for you: last night I told how to get the free audiobook and ebook of Force Multiplier, but I screwed up.

If you're in the UK, Aud, NZ, SA India or another English-speaking country (but NOT US or Canada) here's the form for the bonus story:

And if you're in any non-English-speaking country, email your receipt to: