Always interesting to get hate mail from anti-mushing folks who say that because I participate in this sport, I'm endorsing everything that every musher has ever done. I think that from the outside, mushing looks like a monolith, but that couldn't be farther from the truth.

I believe that at its best, mushing is incredible. It's such a powerful way to connect with dogs who are doing what they love, and to participate in a deep history and culture of (many) northern places. And sled dogs can be very, very happy.

But if I don't respond to every message asking me to condemn something (usually the same few things on repeat), it's because (a) I might not have seen it and (b) I am literally just trying to get through the day with a job and real-life dogs to take care of.

And the accusations seem to take two main tracks.

1. Did you know about this [example of abuse]?

2. If you knew about it, why aren't you doing anything? Usually followed by: You're obviously just in this for money and fame.

(I'm definitely in a unique situation now as a musher with an audience. Mushing HAS helped me build a career and a niche in the writing world--it would be disingenuous to deny that. But I never expected it. It's not, like, a normal course of events. I'm as surprised as you are.)

I remember being anxious when Matt Power (pictured, rolling in a dead fish) was little because he was so skinny, no matter what he ate. The vet said he was perfectly healthy, but I worried that because he was a sled dog, people would say he was being starved. 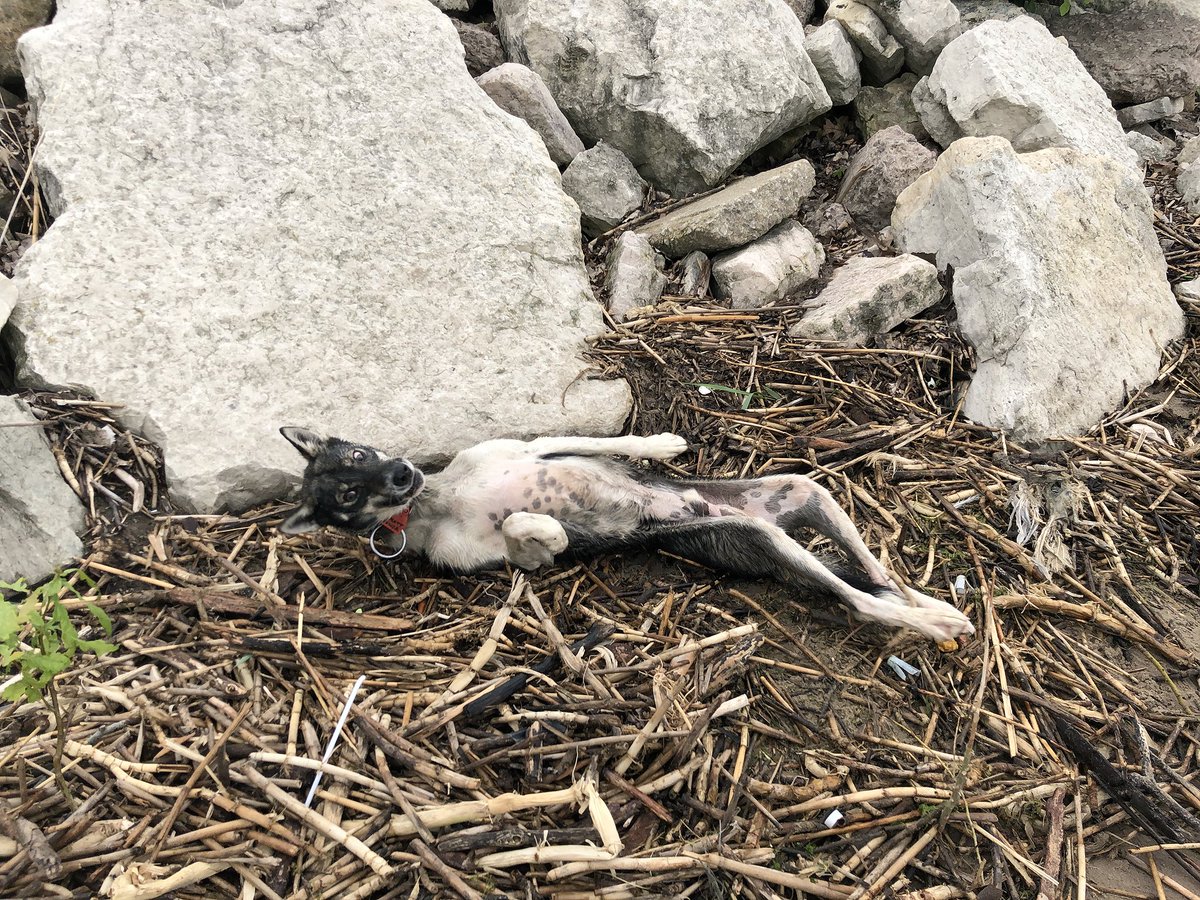 That's part of why we started hashtag #OperationFatMatt -- so that people could follow along on the (sometimes hilarious) journey of getting a picky teenage sled dog with a super-high metabolism to eat. So they'd know that was OUR goal, too!

Anyway, later I realized that my anxiety was beside the point, because if someone wants to attack mushing and use my name, they literally just find pictures of abused dogs who have nothing to do with me and use those instead.

The other thing I get asked sometimes, as if it's a big gotcha, is "Why aren't you doing anything about [insert terrible thing here]?"

Responsible mushers are in constant conversations with each other about how to help make this sport better. Like, we are ALWAYS negotiating this stuff. We're organizing with races and veterinarians and rescues and taking care of dogs whose mushers fell on hard times and...

A lot of this stuff is tedious and not particularly interesting or worth being publicized, you know?

Plus there's a catch-22: if people are trying to prove that something is bad, and you say "hey, we're doing this to make it better," then they're like SEE, YOU ADMIT IT'S BAD

Sometimes I wish I could sit down, face to face, with anti-mushing activists. (I've tried before and been ghosted; I think I'm more useful to them as a symbol than as someone with complex thoughts.)

Here's what I would do.

I would ask, is there any way you think it can be positive and healthy for dogs to pull sleds?

Is there any way that you think sled dogs can participate in a race ethically?

What if the distance is easy for them? What if there's no money or financial incentive to "win", and the focus is about mushers sharing new trails and adventures with their dogs?

What should sled dog housing look like, given that the dogs need shelter but are also adapted to cold temperatures, and are generally very comfortable in the snow?

What kind of veterinary care should be available to them?

What social systems should be in place to help people who have animals but fall on hard times -- mushers and pet owners both?

How do we make sure that pushes for animal rights, including sled dog welfare, are intersectional and aren't biased by class, culture, and race?

I honestly think that if most people sat down together and brainstormed what mushing SHOULD look like, what it CAN look like, most of the answers would overlap. They really would.

It would be doable, too.

That's why I do this. That's the mushing I believe in. //