1. Please remember as you're praising the audio of Tom Cruise yelling at crew members who don't follow Covid restrictions that he's the chief enabler of a criminal organization that has destroyed people's lives, bankrupted and separated families, led to people being imprisoned,

2. forced women to have abortions against their will, led people to die after being forced to follow dangerous pseudoscience, led former members to be chased all over the country/world by private investigators...

And those are just the broader issues....Tom Cruise is evil.

3. In the audio people are praising, Tom Cruise goes on about people losing their homes due to COVID. Like another Scientologist, Elisabeth Moss who plays someone controlled by a cult in the Handmaids Tale, Tom Cruise is projecting.

Scientology does that to its members.

4. Tom Cruise was so critical to the survival of Scientology that David Miscavige broke up his marriage to Nicole Kidman because he knew Nicole was driving Tom away from Scientology.

You are praising someone who is critical to a horrifically abusive, criminal organization

5. And for people who are saying "both things can be true" -- no. You are aiding a sophisticated PR campaign by Scientology when you praise someone like Tom Cruise. They recruit people into Scientology by using your praise.

6. There's a reason that those of us who have reported on Scientology for years or have lived through it like @MikeRinder are trying to warn against people praising Tom. We know how Scientology uses this praise to boost its membership ranks and how to keep people locked in.

7. Tom Cruise approved a Scientology plan to torture and imprison his ex-girlfriend. How much do you need to know about the guy?

He promotes an organization which promotes more pseudoscience through laundered sources than most any other.

8. While you're praising Tom Cruise for his fake COVID rant, Scientology is forcing people to disconnect from their psychiatrists & critical medication. People who have severe depression, schizophrenia, etc are suffering under Scientology thanks to Tom Cruise and David Miscavige.

9. Thank you, as always. @MarlowNYC

11. There are members of Scientology who are being held against their own will right now in Scientology centers and bases across the United States (not to mention, the world).

Tom Cruise could end their misery with one candid interview...he knows everything.

12. In the coming days, members of Scientology who have either been forced to spend money they don't have or work in indentured servitude, will be shown your tweets praising Tom Cruise. They will be told..."The world is praising the #1 Scientologist"

It will keep them locked in

13. I Will never forget how some of you refused to listen to people who know what they're talking about.

The same people who talk about the dangers of normalizing all the time normalized Scientology and Tom Cruise yesterday.

14. I know many former Scientologists. Once they're allowed to learn the truth, they get deprogrammed very quickly.

The problem is Scientologists aren't allowed to read or watch stuff critical of Scientology.

Tom Cruise could end Scientology with one candid interview.

15. Statement from @LeahRemini on the people praising Tom Cruise for his fake COVID rant.

This is why those of us who know what Scientology is about pleaded with many of you not to praise him.

Hope you'll read it in full. 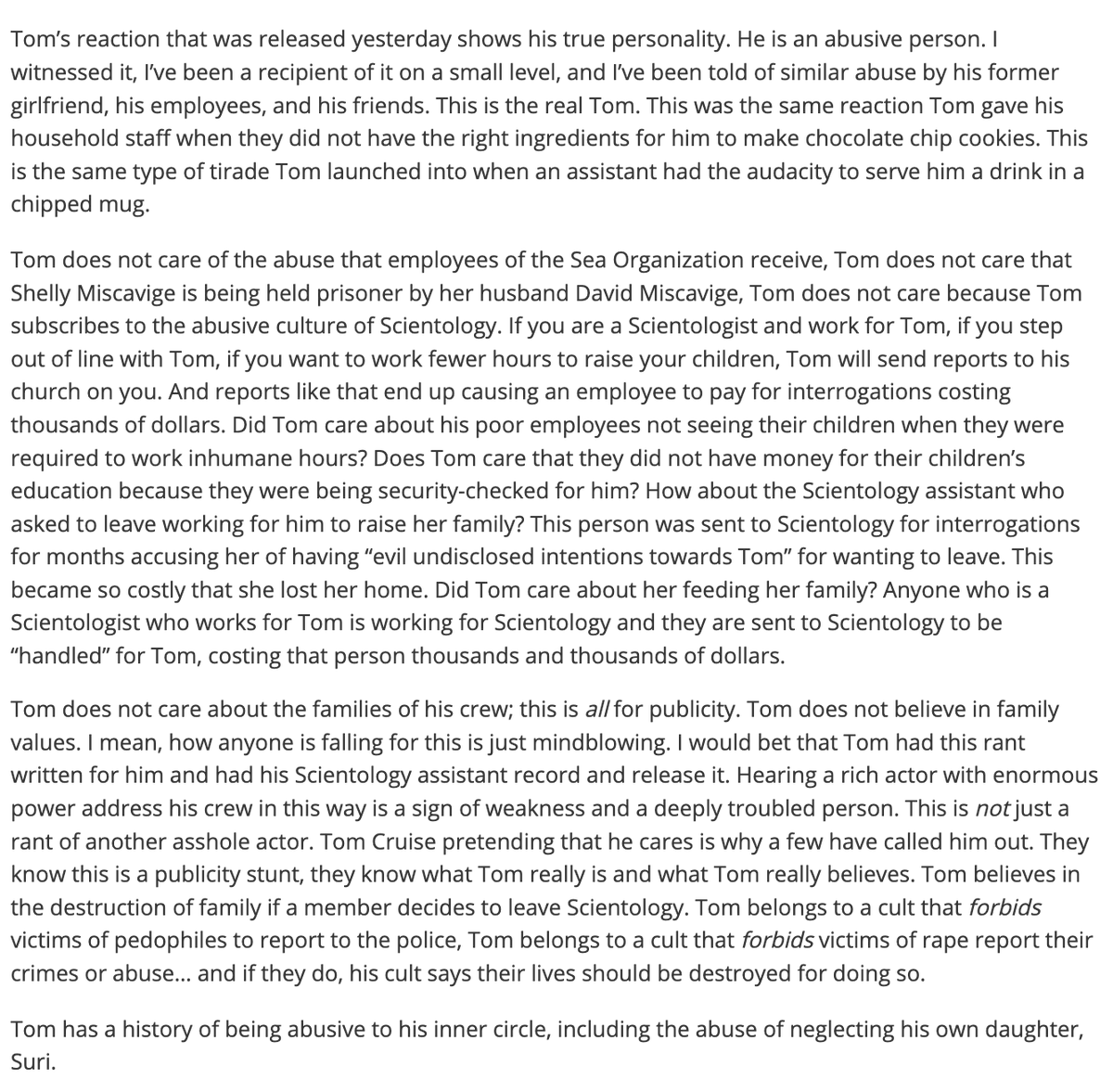 16. Does @enews work for Scientology?

Justin Sylvester, this isn't why @LeahRemini thinks its a publicity stunt

@kymwhitley "She's always on him" - yes, he's the public face of a criminal org

17. So let me get this right @Morgan_Stewart, you think @LeahRemini should just move on and not call out the man that allows Scientology to exist today?

She shouldn't call out how he enables a criminal organization that bankrupts people and separates families?