1. Some people were apparently confused by what I said to @benyt for his column...specifically the part I highlighted. 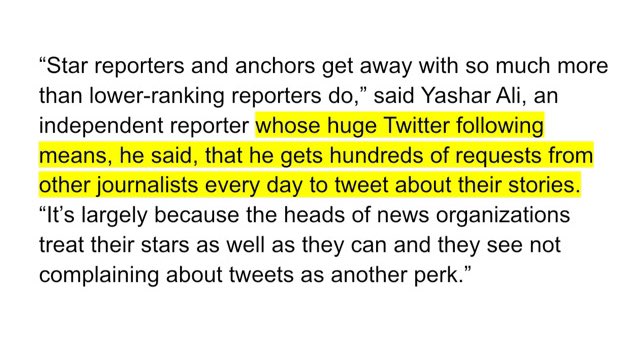 2. For the past four years I have encouraged reporters, writers, anchors, and editors to send me their stuff.

3. So over four years I’ve built up quite the list of people who have been told they can do this. They also tell their colleagues.

I love it and encourage it.

I learn so much this way.

And I love that I can bring attention to people’s work.

4. I know this sounds silly or perhaps frivolous but it gives me a lot of pleasure looking at the analytics of a tweet and seeing that I was able to drive 30,000-40,000 clicks, for example, for a local news reporter’s story.

5. I also get requests from reporters who send me other reporter’s work...for example this story was sent to me by a reporter on behalf of their friend who is a reporter who wrote this story.

6. I also have reporters send me their tweets that don’t have a story but contain other info.

I have 750,000 followers, my dms are open, my contact info is in my bio...so after four years of encouraging reporters to send me stuff...this is how I get hundreds of requests daily.

7. So feel free to send your stuff...and don’t worry about making introductions or being polite...save that time for something else.

Also don’t see my lack of response as a bad thing, it’s just impossible to respond to everything...beyond reporters I get so many other messages.

9. And what are they going to say about all the messages I get from people asking for help getting away from abusive husbands, bosses, etc? Those fake too?

Bit of a sensitive spot I'll admit given how much time this all takes up.