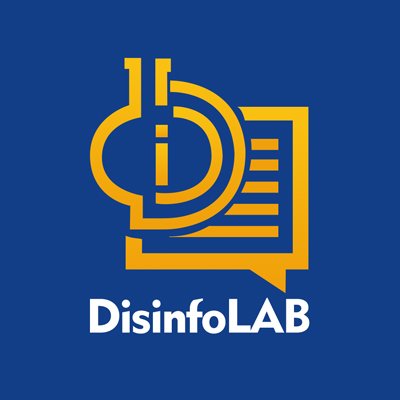 The #toolkit dropped by @GretaThunberg had many key players but the name of the foreign expert Pieter Friedrich was dramatic as he was the part of a true story we were working(About group which tried every possible way to unsettle India)
#UnendingWar(1/17)
https://thedisinfolab.org/the-un-ending-war-from-proxy-war-to-info-war-against-india/ …

These series of events have been around everyone for long but yet major stakeholders failed to notice this shift from proxy war to info-war/psy-war
Our attempt was to try & map this network, we did expect a elaborate design but the reach & depth of the planning was shocking(2/17) 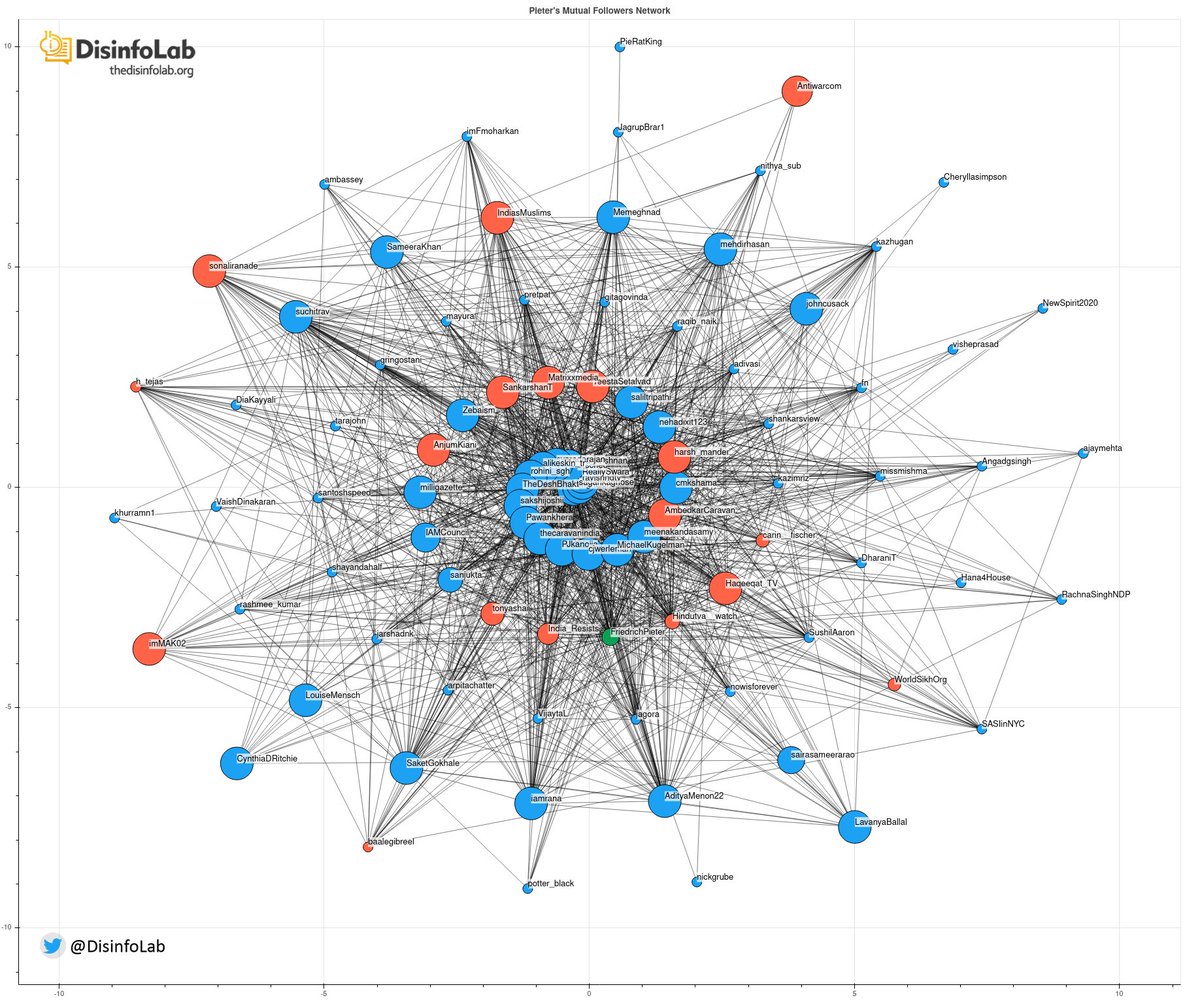 The proxy war:
The story starts from the 1980’s, where Bhajan Singh Bhinder aka Iqbal choudhary was funding a terror network for carrying out large scale violence with the help of another terrorist Lal Singh & Pakistan’s ISI. India escaped this attack,Lal Singh got arrested(3/17) 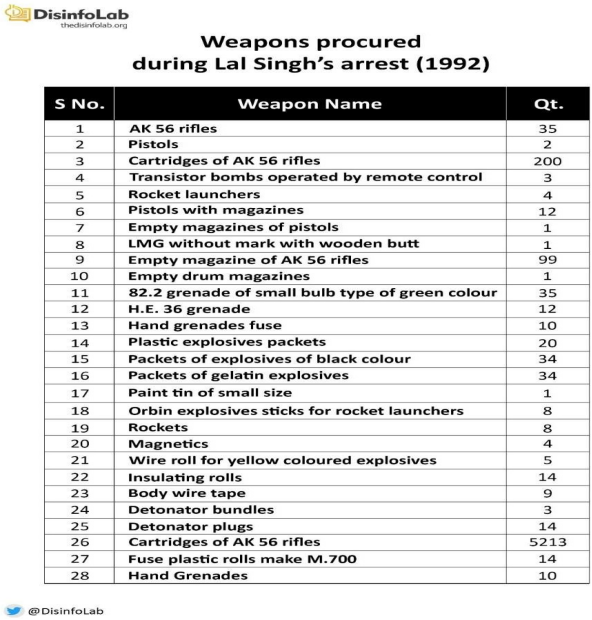 These attacks were part of a large conspiracy called K-2(#Kashmir-#Khalistan), which hatched in Lahore under patronage of Amir ul Azeem, the secretary of Jamaat-e-Islami and was supported by several others like the Uncle of present S&T minister of Pakistan @fawadchaudhry (4/17) 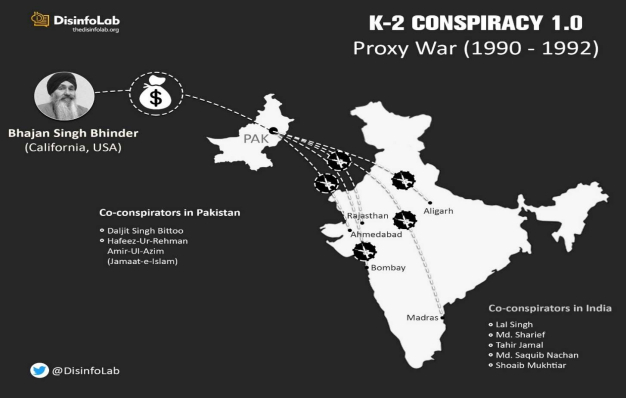 At the same time in the US Bhinder & his gang were involved in a major trans-national drug trafficking & a DVD privacy network. In order to fund this network they managed to take control of the most prominent Gurdwara(Fremont Gurdwara) after a bloody fight within Gurdwara (5/17) 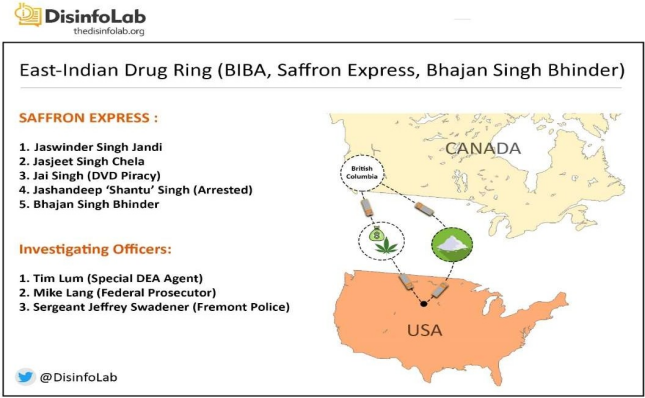 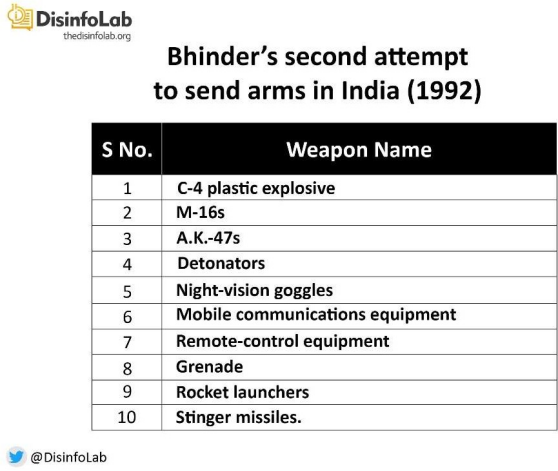 The shift to info/psy war: Carrying the load failed efforts to send weapons to India and with the change of millennium Bhinder decided to change his methods and shifted his focus to info-war against India and make use of the online platform but for that he need a fresh face(7/17)

This is when Bhinder finds a young Christian Missionary Pieter Freidrich, who had a decent oratory& writing skill but was economically struggling, he was even ready to work as security guard, and hence the offer to become an ‘expert-activist’ was quite lucrative to refuse. (8/17) 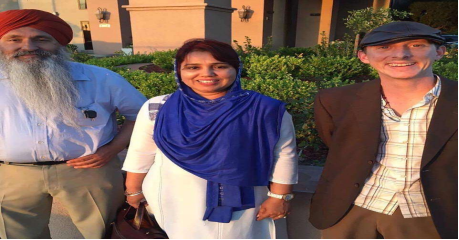 Pieter came on board & found a new role as an anti-Gandhi crusader. But it was important to provide credibility to Pieter, so a number of institutions & organizations were formed in the US – prominent being Organization for Indian Minorities (OFMI)(9/17)
Img: Web of Institutions 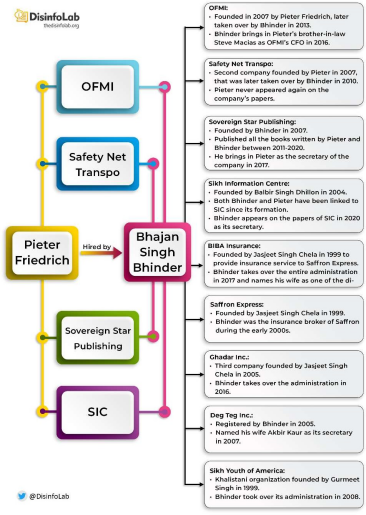 OFMI was purportedly set up for the cause of minorities in India but had no Indian or Indian-origin minority in it. To further boost Pieter’s credibility a no. of books were published in his name through the company, Sovereign Star publishing registered by Bhinder in 2007(10/17)

The design seemed almost the replica of what was happening in proxy war except the weapons were replaced by #disinformation. However, the early attempts were not smooth, Pieter changed his name 3-4 times, writing book in various aliases and also appeared in different names(11/17) 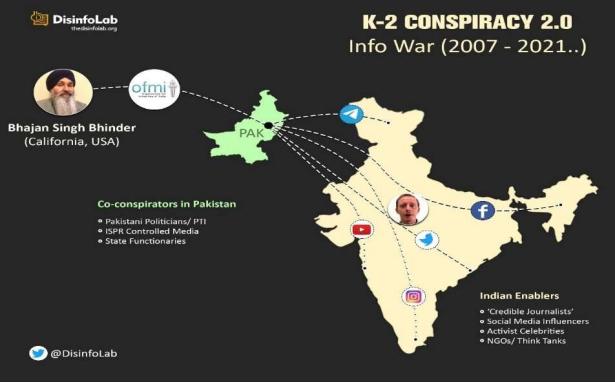 But the modus operandi was standard: set some books published in his name, few articles in compliant news portals , create some social media avatar and start connecting with social media amplifiers.(12/17) 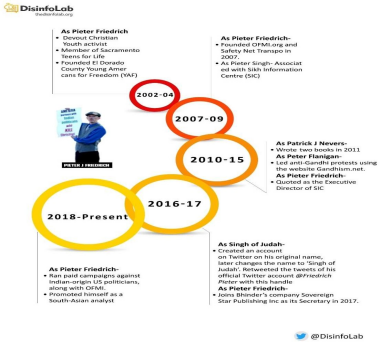 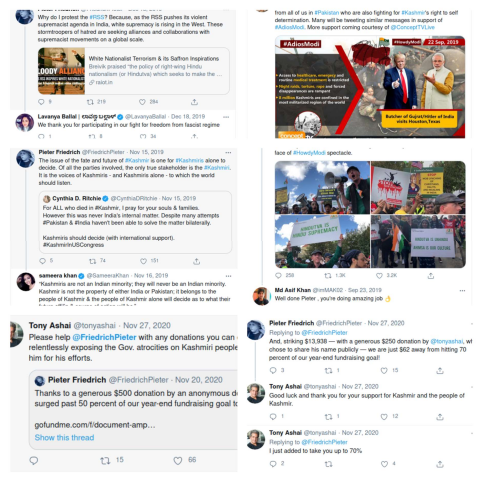 Bhinder-Pieter duo 1st started their tirade against Mahatma Gandhi. The objective was to malign the image of non-violence associated with India. But in order to dent India’s image it was necessary to provide an alternative narrative,so they portrayed India as ‘fascist state’13/17 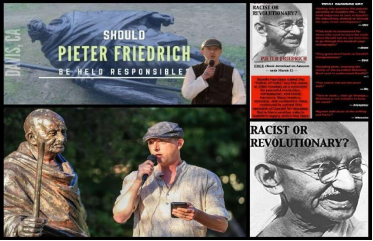 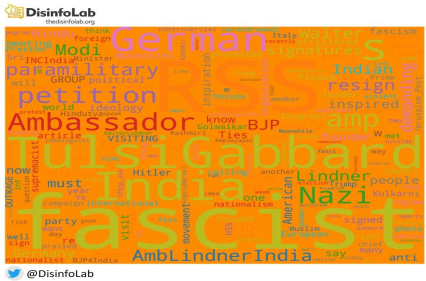 Despite the elaborate planning,it was hard for them to get audience & credibility in Indian media.But Pieter managed to hook up a significant following amongst India’s major influencers. The beauty of the project is evident from the list of media & social media amplifiers 14/17 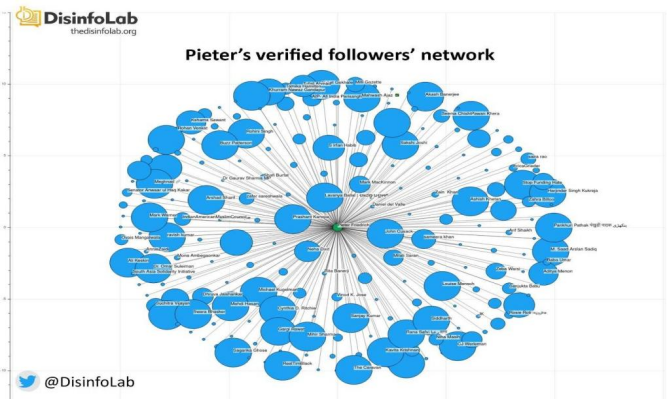 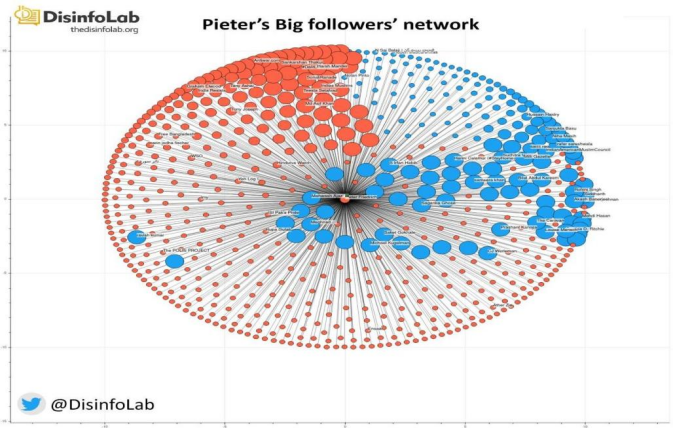 The brilliance of this operation was not merely the planning and execution- the makers also wanted to make it self-sustainable. Pieter had started a fund raising for his ‘cause’, and claimed to have raised $30K. But all this fund raising was a added bonus to credibility. (15/17)

Not surprisingly a lion’s share in OFMI & Pieter’s promotion come form #Pakistan, from Cabinet Minister to Influencers & Media.@fawadchaudhry is one of the prominent promoter, whose uncle Choudhary Sr. had played significant role in orchestrating the terror attacks in India.16/17

The OFMI & Pieter’s promoters might have been fooled by their projections –a White Expert & a US based Organization but they should have been aware about the nature & extent of info warfare ongoing against India. Their fall for this charade is an irony of epic proportion (17/17) 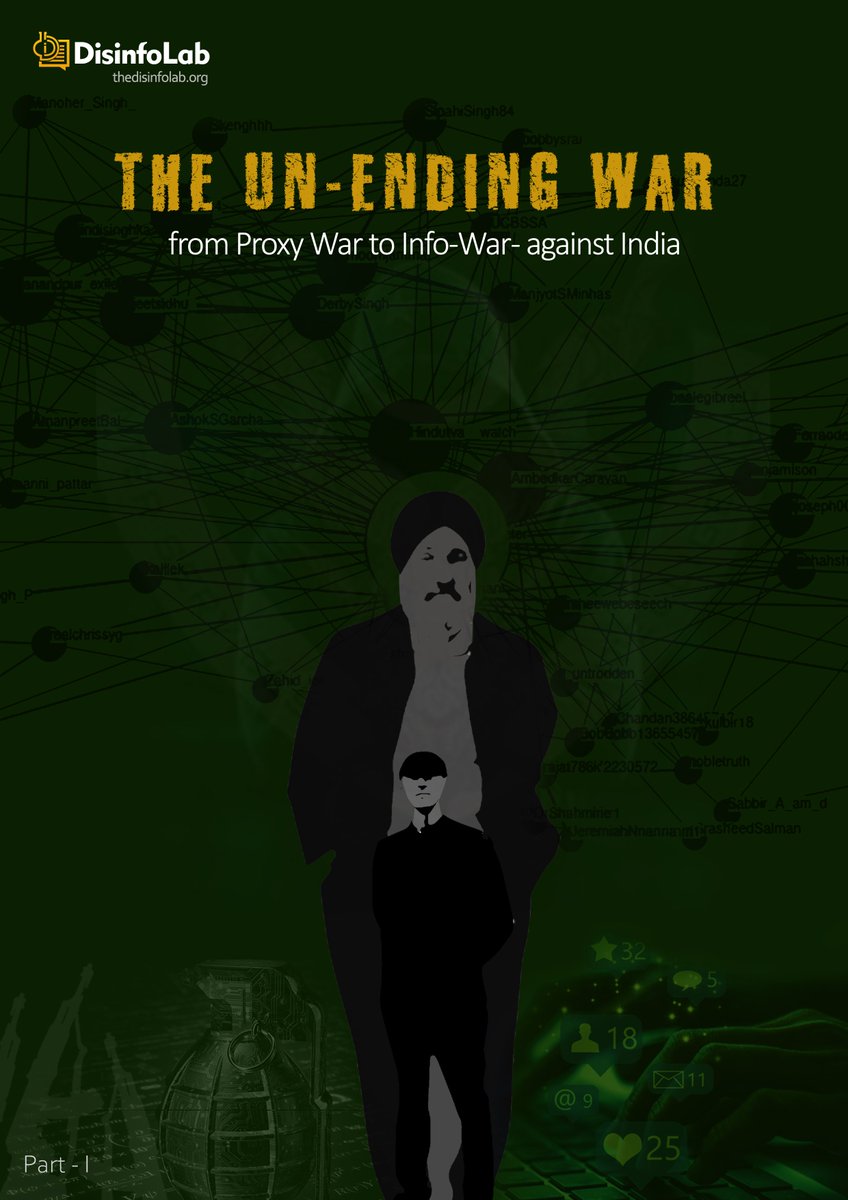 This is the Part 1 of our upcoming multi-part series on Info-war against India !!