What are they doing differently?

I was watching a documentary on songwriter Ed Sheeran. In it, he described his songwriting process.

It struck me as identical to the process that author Neil Gaiman detailed in his Masterclass.

Ed Sheeran and Neil Gaiman are in the top 0.000001% of their fields. They're among very few people in the world who consistently generate blockbuster after blockbuster.

If two world-class creators share the exact same creative process, I get curious.

I call their approach the Creativity Faucet:

Visualize your creativity as a backed-up pipe of water. The first mile of piping is packed with wastewater.

This wastewater must be emptied before the clear water arrives.

Because your pipe only has one faucet, there's no shortcut to achieving clarity other than first emptying the wastewater.

Let's apply this to creativity:

At the beginning of a writing session, write out every bad idea that reflexively comes to mind.

Instead of being self-critical and resisting these bad ideas, accept them.

Once the bad ideas are emptied, strong ideas begin to arrive.

Here's my guess as to why:

Then it begins to avoid them. You start pattern-matching novel ideas with greater intuition.

Most creators never get past their wastewater. They resist their bad ideas.

If you've opened a blank document, scribbled a few thoughts, then walked away because you weren't struck with gold, then you too didn't get past it.

Neil and Ed know they're not superhuman.

They simply treat the brain as a pipeline for entering a creative flow state, and they never forget that the pipe needs clearing.

In every creative session, they allot time for emptying the wastewater.

They're not worrying whether clear water will eventually arrive. It always does:

Mozart had 600 musical compositions and Edison had 1093 patents.

Only a few are remembered today, and that's the point.

Here's Neil Gaiman's reaction to this Creativity Faucet essay (it's also on my site): 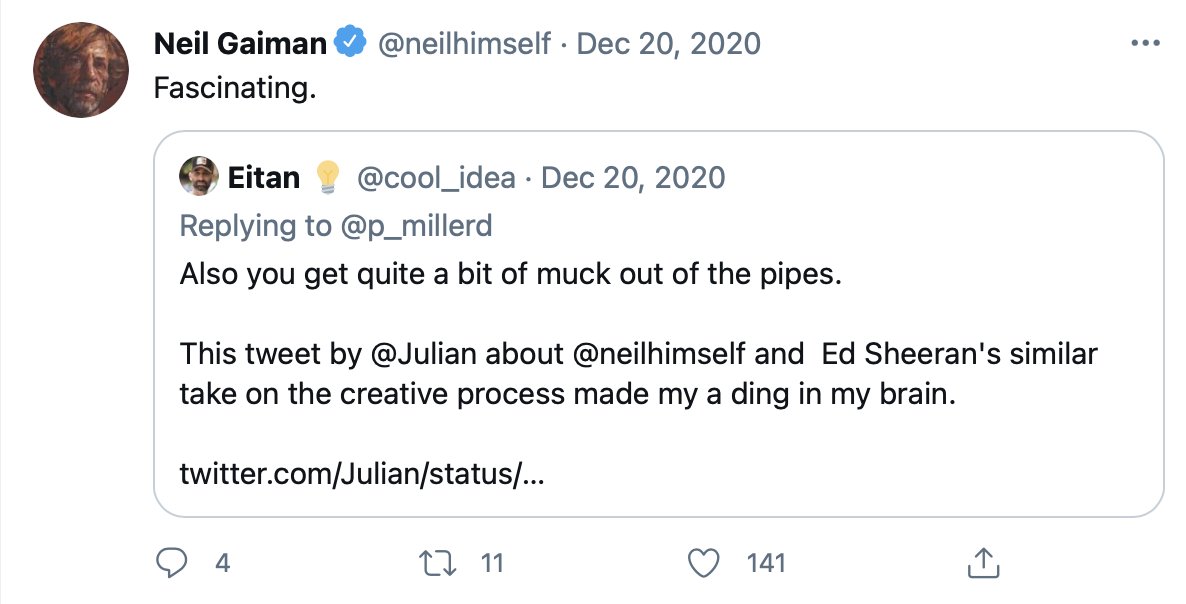 Here's an interview where Ed Sheeran talks about the faucet:

Here's a video of John Mayer showing off the Creativity Faucet in real-time:

Follow along as I deconstruct marketing, writing, and startups.

See my past threads on creativity here:
@julian