1/ Thread about a recent #ArtWar I had with my daughter. This game was taught to me by Rob Lebowitz ( https://www.flickr.com/photos/lebocomix/ …) 30 years ago when we were chavrutas in yeshiva. He's 100x the artist I am, but we worked well together.

3/ The Guffin can be anything and the game is basically an improv cartooning exercise. The goal of player1 is to defend the Guffin while player2 tries to destroy it.

4/ The #ArtWar game works best with a "yes and" attitude, so players shouldn't get hung up on logic, as long as everyone engages with a goal to share, be funny, and keep the game going.
https://en.wikipedia.org/wiki/Yes,_and ...

5/ Naturally an #ArtWar will have inside jokes. And depending on the resources, the art can take a back seat to the description and interplay. I try to number the entries on the page while playing in order to make it easier to remember the play-by-play.

6/ There's a deep lesson to the #ArtWar as well, even beyond the already beneficial culture of "yes and" in improv collaboration. Taken seriously, the game is a model for problem-solving, especially in logic & in Talmud. (More on that later)

7/ What follows will be the #ArtWar, step-by-step. Player1 is me, JC. Player2 is my daughter SC. Setting is in a high school auditorium that had broken A/C. We were watching my son's graduation. We were using my 3x5" pocket note-pad and pencil. 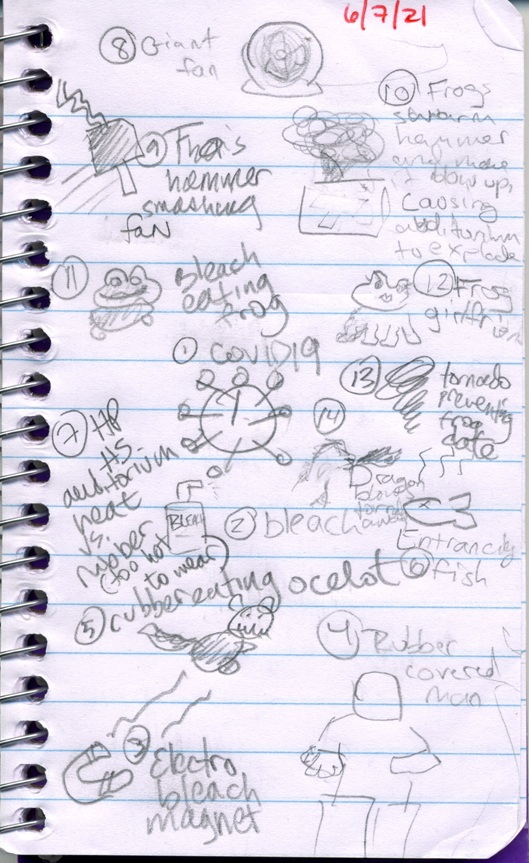 8/ I start off with the Guffin, the (1) COVID19 virus. Of course. #ArtWar is often editorializing about the players' life. The in-person graduation was a miracle after 18 months of being shut-in. We were in the balcony to be distanced, but I still felt it was special. 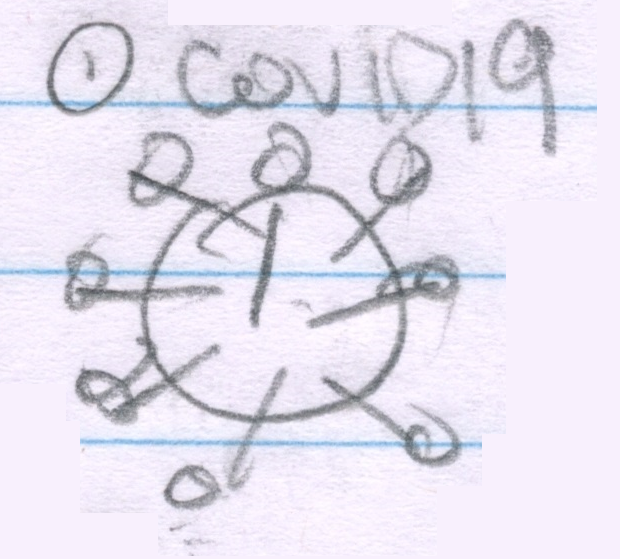 She explained this was purposeful reference to Trump's press conference when he advised us all to drink a highly toxic substance based on his dirt-level knowledge of science.

10/ Now my turn. My moves are to either destroy #2 itself or find a way to defend #1 better. I chose destroy.

I drew an (3) Electro-bleach magnet. This would draw away the bleach, leaving my Guffin safe. Easy-peasy. 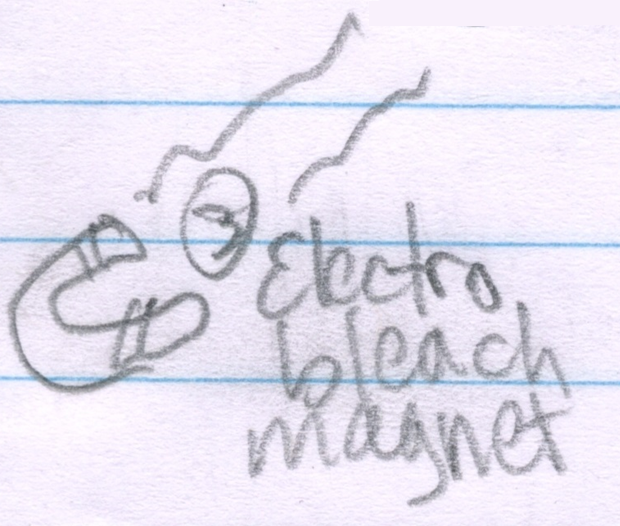 11/ OK, her chance to respond. She can either destroy #3 (the magnet), block it, or find a new line of attack. She goes to block it with #4 "Rubber covered man" which would resist the magnet’s electricity. 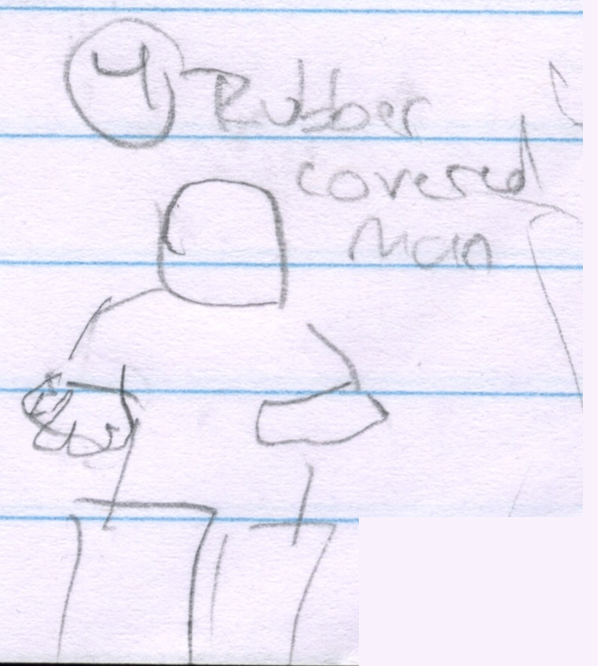 12/ As the game goes on, I can either block/destroy the latest Player2 combatant, or do the same for an earlier one. I stay with her latest pawn and draw a (5) rubber eating ocelot.

Ocey the ocelot will eat the rubber suit, leaving the magnet alone to block the bleach.

13/ She tries to block my latest pawn with (6) an entrancing fish. This will stop the ocelot, leaving the rubber suit alone etc.

Note, because this is a "yes and" game, I didn't argue that Rubber Eating Ocelots don't eat fish. I have to accept her premise as if it would work. 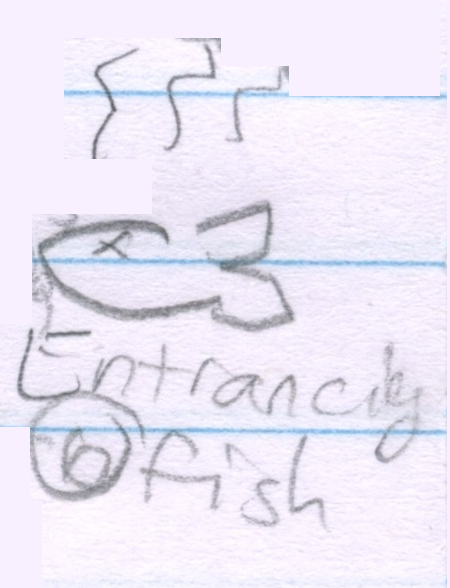 14/ Rather than fight the ocelot conundrum, I devise a new line of defense to take out the rubber man, and by doing so reinforce the "editorial-cartoon" nature of the #ArtWar. I write "[Highland Park High School] auditorium heat vs. rubber [suited man] (too hot to wear)" 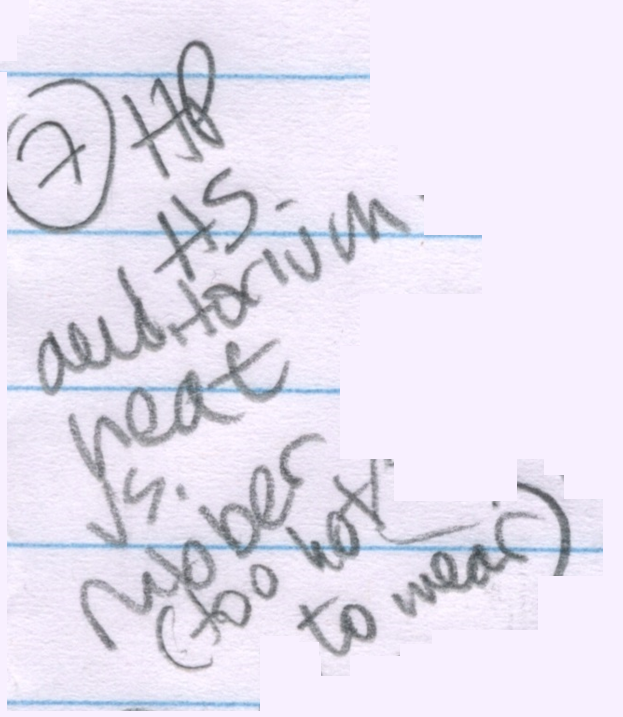 15/ Player2 has even more options than Player1 because she can block/destroy any of my defenses or start a new line of attack. Here she tries to block my latest pawn with a (8) giant fan.

She told me that wanted one of these the whole evening. Ya see, #Artwar fulfills wishes!

16/ I go for her latest pawn and draw "(9) Thor's hammer smashing fan." She's an avid reader of @rickriordan and thus an expert in mythology (I've supplemented it with Bulfinch & Emily Wilson; and D&D 1st Edition Deities & Demigods). We're also just watching "The Avengers." 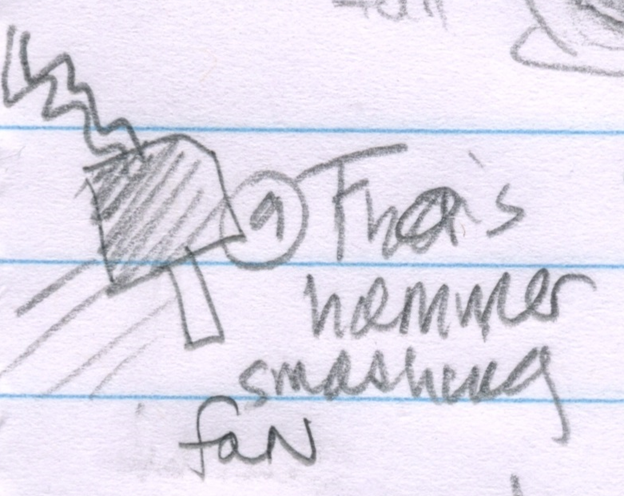 17/ Here, Player2 has a great plan, she counterattacks in a way to deal my latest gambit #9 and back to #7, with an attack - not just a block - of "(10) Frogs swarm hammer and make it blow up, causing auditorium to explode." Now I need to deal with frogs! 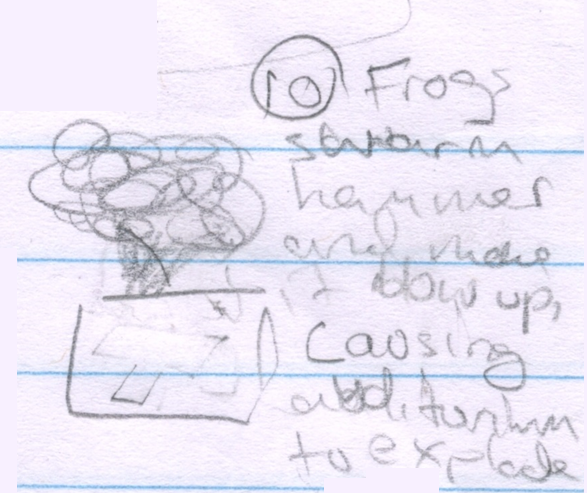 18/ I must choose to defend vs. the rubber man, the bleach, or the immediate threat of the frog swarm. My strategy is to counterattack using my own frog thus limiting her defenses in that any broad based Strategic Frog Initiative would backfire. So: (11) a Bleach eating frog.

19/ Player2 responds to the immediate threat with a fine-tuned defense: (12) Frog girlfriend [#11's]. She managed to neutralize only the bleach-eater without negating the frog swarm. 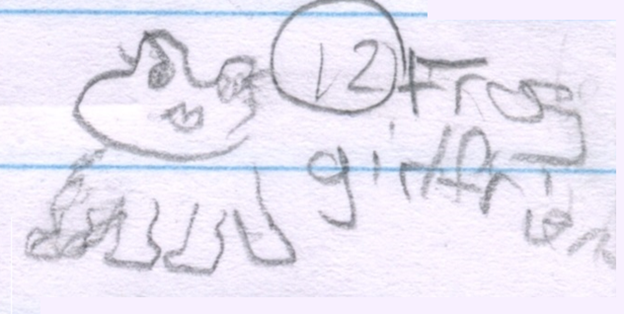 20/ Note, we're playing a "yes and" game so I was a bit stuck with the budding romance gambit. E.g. I couldn't respond with "she eats bleach too! That's what brought them together!" I had to work with it. Hence, a (13) Tornado preventing the frogs' date. 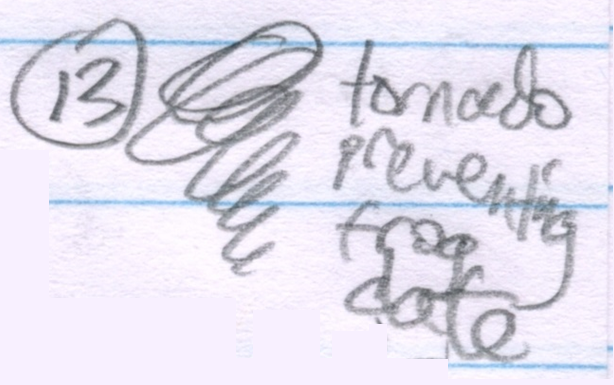 21/ Note, at this point we’re nearing the end of space on the page, so I anticipated this would be the final entry for the #ArtWar. She drew a (14) dragon blows the tornado away. Dragons can do that.

I declared her the winner. And we managed to get through the tedium & heat. 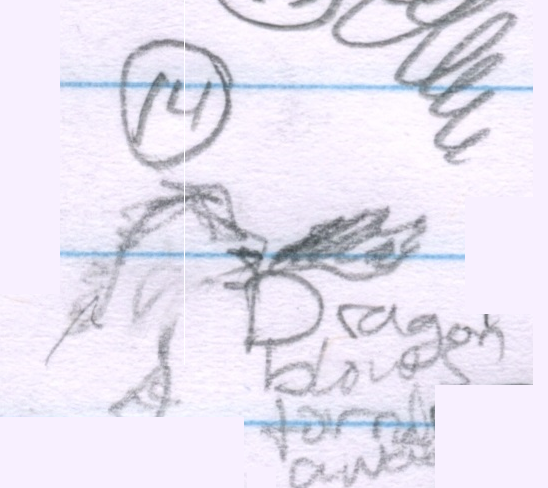 22/ That's the #ArtWar. She and I look forward to doing these when we're in these situations where (a) we can't look at phones (my phone at least) because it's considered rude, while writing in a pad is socially acceptable, and (b) we'd be otherwise bored out of our gourds.

23/ The #ArtWar is also a great kind of diary entry; a snapshot in time which is both funny & fun for the specific moment and rewards revisiting in the future.

I'm publicizing & publishing this particular entry so I can spread the (idea) wealth.