54.02/ This is a fun Rebbe story, which could even be true (who knows), re: apologetics for the bracha of "Shelo Asani Isha." 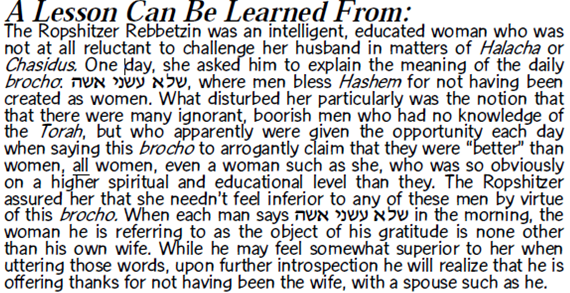 54.04a/ I subscribe to my limit on Twitter in order to actively avoid being in a news bubble. But what the various voices have in common is an intellectual curiosity and a recognition of basic human dignity. I can't take someone's analysis seriously if they lack either.

54.04b/ This also means many 'conservatives' are not in my news-space. That's not me avoiding their political views, just their moral ones.

54.05/ My renewal notice for my local paper, the @starledger, says this: "[you] will be automatically charged $41.88 plus sales tax as applicable every 12 weeks."

54.06/ I got a memo ordering me to comment on #SimoneBiles so here goes: #Literalists cannot understand that mental health is like physical health because they think if it's invisible to them, it doesn't exist. She's injured, guys! Think of it like a sprained ankle. Let it go.

54.07/ Some posts about #SimoneBiles that I found useful:

54.08/ The polls were off in 2016 because SCOTUS gutted the Voting Rights Act in 2013 which served to hamstring the Obama coalition. Polls are based on expected electorate & 2012 won't be repeated (OH & FL blue) until we restore voting rights (aka Democracy).

54.09/ I'm really not much of a Reddit guy but I'm pretty happy to have subscribed to this subreddit "Cool Guides." Here's a recent one right in the center of one of my personal/academic pursuits: proverbs.

54.10/ First of all, @owillis is right that there'd be people cheering the zombies etc. 2nd: it's clear in the Alien saga that powerful people want the Xenomorphs to win because of "profit????" 3rd: See my post from March 2020 below

54.11/ I haven't tried this yet but this looks like a good set of tools to help navigate Twitter better, especially in locking in your reading preferences (see thread):

54.12/ Yet another example of why I really enjoy twitter: being able to follow - and interact if I dared - with one of my heroes, Dr. Buzz Aldrin.

54.13/ This is an excellent retooling of this survey of popularity of American presidents, data from:
https://today.yougov.com/topics/politics/articles-reports/2021/07/27/most-and-least-popular-us-presidents-according-ame …
Redone here:


The top & bottom ten make sense in the retooled version.

54.14/ This is a punchline with a long lead time.
[context: it felt like every week of TFG's term was called "infrastructure week" yet since they were nihilistic criminals, they considered hype the same as action & did nothing. As opposed to Biden's admin]

54.15/ Incredible insight. And such a great way to describe it.

54.17/ This definitely hits the heart of the matter. Most of the most aggressively obstinate resistance has been from those whose mediocrity is in danger of being exposed. Their unjustly attained status - and wealth - is legit at risk.

54.17b/ A follow-up to the mediocrities defending their unjustly acquired status, we have LizBru*n*g glorifying the muck of A_my_Ch_ua.

It's wise to judge people by their actions not their words (or stated ideals) and LB seems legit evil at this point.

54.18/ Pro-tip: if you describe a part of your body as having an ideology ("a racist bone") then you're someone who assigns ideology to biology. Which is the root of all bigotry.

I'm not afraid for myself: I had COVID19, I'm twice vaccinated, but #Delta transmits easily and I am trying to protect the lives of others.

54.20/ My son is the Sports Star of the week! Normally I don't publish pictures of my kids, but he's in an actual newspaper (The NJ Jewish Link), so here goes:

Q: What is your favorite sport?

A: My favorite sport is baseball, because it’s a very cerebral game that is played by teams but still depends on the individual.

54.21/ My 12yo had a fortune cookie that said "procrastination is the fear of success" which rightfully ticked her off. Vituperatively, I responded that "procrastination is reluctance to knowingly do something painful." This is often rational behavior, no?

54.22/ If my cousin, a die-hard/long-suffering #Mets fan thinks the trade was worth it, that's good enough for me. #LGM

54.24/ This is as good a response as I've seen to some wild-eyed goofus asking if you, a teacher, are planning to use the dreaded See-Are-Tea:

54.25/ #DafYomi thread, with a particular focus on whether or how one can use an elephant as a sukkah wall.

54.26/ Shabbas is nigh. The #DeltaVariant is running rampant so be safe everyone! #ShabbatShalom