These are fair question regarding systems like the one Apple has proposed, and there is enough general ignorance regarding some of the building blocks that I think it is worth attempting to answer.

But it's going to take way more than a few tweets, so settle in...

First, I'll be incredibly fair to Apple and assume that the system has no bugs - that is there is no way for a malicious actor inside of outside of Apple to exploit the system in ways that it wasn't meant to be exploited.

At the highest level there is your phone and Apple's servers. Apple has a collection of hashes, and your phone has...well tbh if you are like a large number of people in the world it probably has links to your entire digital life.

We can draw a big line down the centre. 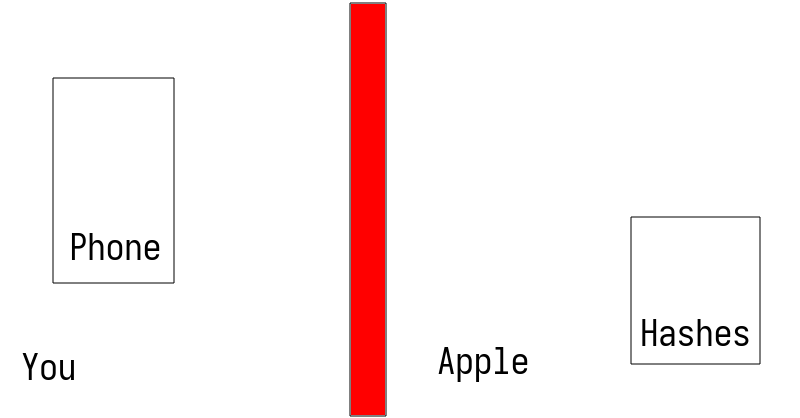 Let's start by talking about those hashes.

Those hashes are not cryptographic hashes. They are *perceptual hashes*.

That is to say that unlike the "hashes" you have mostly heard about they are not designed to be collision resistant...in fact mostly the exact opposite.

Perceptual hashes are designed such that (and I'll quote directly from Apple here.. "visually similar images result in the same hash"

Note the word "similar" and not "the same".

To achieve this Apple invokes a magic neural network that they appear to have trained by taking in input images, perturbing them in unspecified ways (one would assume: pallet swaps, rotation, cropping etc.) and teaching the network that those to images are "the same".

The size of the hash (in bits) is stated to be "much smaller" than the bits needed to describe the vector.

Wow, we haven't even started yet and we are already in the weeds. In order to properly explain what just happened you need know about a concept called the Pigeonhole Principle:  https://en.wikipedia.org/wiki/Pigeonhole_principle …

Basically if you have 10 pigeons and 9 holes to put them in, then at least one of those holes needs to hold 2 pigeons.

Which is to say, when you have a small hash space and a large input space, there will always be "collisions" (2 different inputs mapping to the same hash)

OK we are almost out of this rabbit hole. Remember that Perceptual hash function are generally *not* cryptographic hash functions. In fact, they are designed such that *similar* images result in the *same hash*. They are, in fact, designed to encourage collisions.

Those collisions are a real problem. There are billions of photos taken every single day. And we know very little about the statistical properties of NeuralHash.

There is another concept worth mentioning, the birthday problem ( https://en.wikipedia.org/wiki/Birthday_problem …).

Even if we ignore the construction of malicious images (seemingly innocent images) that are *designed* to cause collisions, and only focus on innocent images we are left with a lot of thorny statistical questions.

To make matters worse, there aren't clear dividing lines between what makes an image "innocent" - context actually matters. Similar images in composition can and do come across very different when the context of that image is known.

So with all that out of the way, let's return to the scenario.

There are billions of iPhones with hundreds, maybe thousands of images with new ones added daily, and a database with some number of perceptual hashes to compare them against.

(We will assume that the neat little protocol is secure, and I will keep my thoughts about the actual adversarial model of any kind of Private Set Intersection to myself for another time.)

Actually, instead, I will come back to that adversarial model because it is relevant.

Anyway, if we take Apple's word then they have chosen the parameters of this system such that the *actual* probability of a false *flagging* of a given account is 1 in a trillion.

Note: that is *not* (as has been reported in a few places), the probability of a hash collision.

The fact that there *is* a threshold parameter suggests that collisions are more likely, hence the need for a safety margin.

So, there is our first (small) privacy leak. Each account will be associated with a number that relates to how many images they have that have perceptual hashes collisions in the database - with no way of knowing the actual odds of those collisions occurring.

Now, that may be a small leak when the knowledge is confined to Apple...but...that information is now subject to government search requests and hackers!

And the way people have been talking about this scheme, many will conflate the presence of a collision with something worse.

To summarize where we are so far...

Apple get to learn how many images you possess that have perceptual hash collisions with images in a database.

We don't know how common these collisions will be, but based on the fact that Apple requires a threshold of collisions to avoid false positives, we can assume they are at least not cryptographically impossible.

That probably means collisions can also be forged.

So what happens if someone works out how to collide an image with one in the database? Well plenty of apps save images directly to places where they may work there way into iCloud photos. It doesn't take a genius to work out an attack path.

That number stored about you goes up.

Regardless of whether the collisions are accidental or malicious the important takeaway from this part of my ridiculously long rant is that this system is *designed* to allow collisions and *compensates* for it by requiring a threshold of collisions before further action.

During that time anyone with access to that database may make assumptions about what your number means. (They shouldn't but humans are humans)

Privacy isn't just about direct knowledge about you, it's about the derived assumptions too.

Even if you 100% trust Apple I think you could sketch up a dozen or so scenarios in which they are forced to use a different database set to compare against and *bam* all of a sudden it's a decentralized mass surveillance network, every authoritarians dream.

Because, this thing isn't running in the cloud, it is running on your device and reporting back to Apple. Apple tells it what hashes are "crimelike" and with the help of your phone they learn a number. Your phone is co-opted into the surveillance network.

A couple of people don't like that I said "Apple learns the count" because of the "Safety Vouchers" and I should have been more clear about this:

From my understanding Apple *do* learn the count of matching collisions, but it is *obfuscated* by synthetic vouchers.

Obfuscation is not a cryptographic guarantee it is a statistical one and it is highly dependent on what else is going on in the system and the parameters that are chosen.

It is a property that applies over a set of accounts and not (necessarily) to individual accounts.

For those who have followed me for a while know that I put absolutely no value on noise-based obfuscation. If you look around you will probably find entire articles and twitter rants just on that topic. But we are too deep in the weeds again.

Even so, these parameters are chosen by Apple and they are proprietary. You don't actually know what the statistical guarantees of the system actually are, and likely never will.

Outside of changing the database itself, we could imagine all kinds of attacks resulting from a well constructed "technical capability notice" i.e. change parameters, reduce thresholds, or give different accounts different thresholds.

I excluded outright bugs in the introduction and it is important to clarify that these kinds of attacks are not exploiting unintentional bugs in the implementation system, they are exploiting the design of the system itself.

The design of the system places Apple in the very powerful position of being able to learn some information about what you have stored on your phone.

They may be honest and obfuscate that information from themselves until they are absolutely sure it's worth investigating...

...but honesty is the *only* thing you are relying on: In a climate of increasing state authoritarianism, legal attacks on the general right to privacy, cyber attacks, and insider threats you are banking on Apple, or someone who can compel Apple, from never abusing that position.

This thread has gone on too long, and reflects a late Saturday night stream of consciousness and not an edited position paper.

If I phrased something badly that is on me, but I think the main points are clear enough.

For what it is worth, I built a career on breaking "secure" systems and I have broken many in theory and in practice.

I will always fixate on ways a system can (and will) be broken or abused and the harm that it will do. I can only present the risk, and my opinion of it.

Also, none of this is my actual main concern, like many others the only reasonable explanation I can think of for Apple choosing to do this client side is they want to apply it to more on-device things (like e2ee messaging) in the future.

Anyway as the quote goes "I have only made this letter longer because I have not had the time to make it shorter."

Sorry for all the tweets, and to all the cryptographers and mathematicians who are going feel that my ad-hoc simplifications of nuanced topics are way too rough.