There’s no link between recent policies on the private tutoring sector.

These are Sino-Foreign institutes and programmes which are licenced to deliver degrees via partnerships within the PRC.

The list of 286 closures is cummulative and lists all programmes which have already closed down.

When a programme is approved, it is given a licence expiry date. All students *must* graduate before this date.

The list published last week details 286 programmes and several institutes which have closed down.

It includes all that have been issued licences between 1997-present which have now closed down.

All of these have been orderly closures

The article cites Masters programme by NYU in partnership with ECNU.

Firstly, these are nothing to do with NYU Shanghai which is a separate licenced joint venture running multiple UG majors and issuing two degrees to its graduates: NYU Shanghai (China) and NYU (US) degrees

The MoE database of Sino-Foreign programmes clearly shows these as separate licences : NYU Shanghai with 4 other masters programmes “closed down” 已停办

Those programmes were for single NYU Masters degrees to be delivered in partnership with ECNU on their main campus in Shanghai. Not at NYU Shanghai.

As far as I’m aware, these programmes never recruited any students, and licences were not renewed. Possibly due to the shifting focus and priorities with NYU Shanghai. 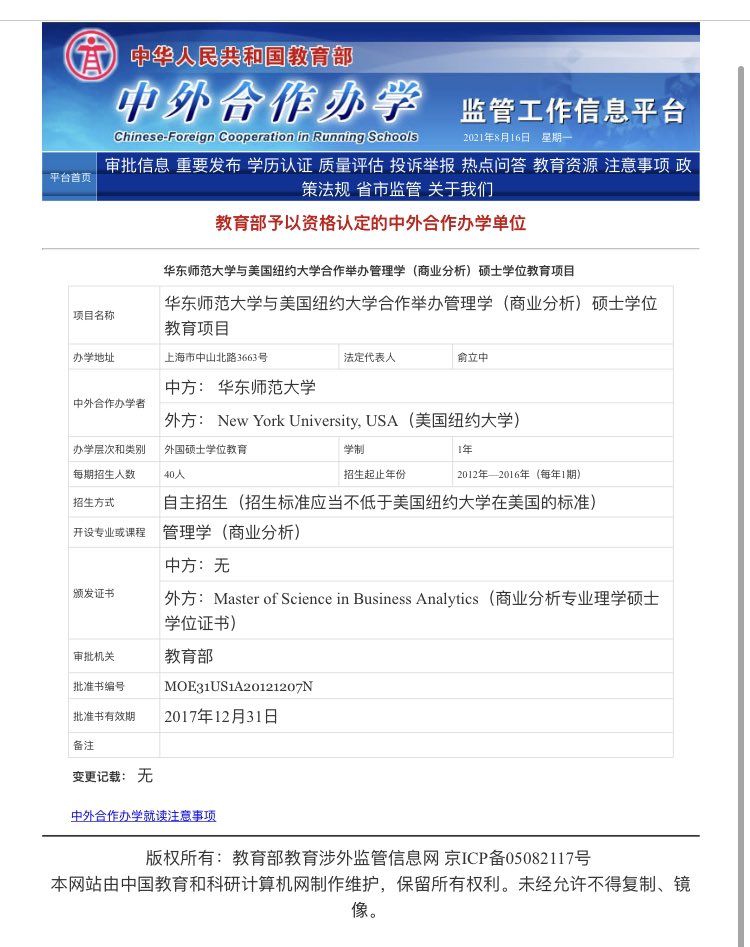 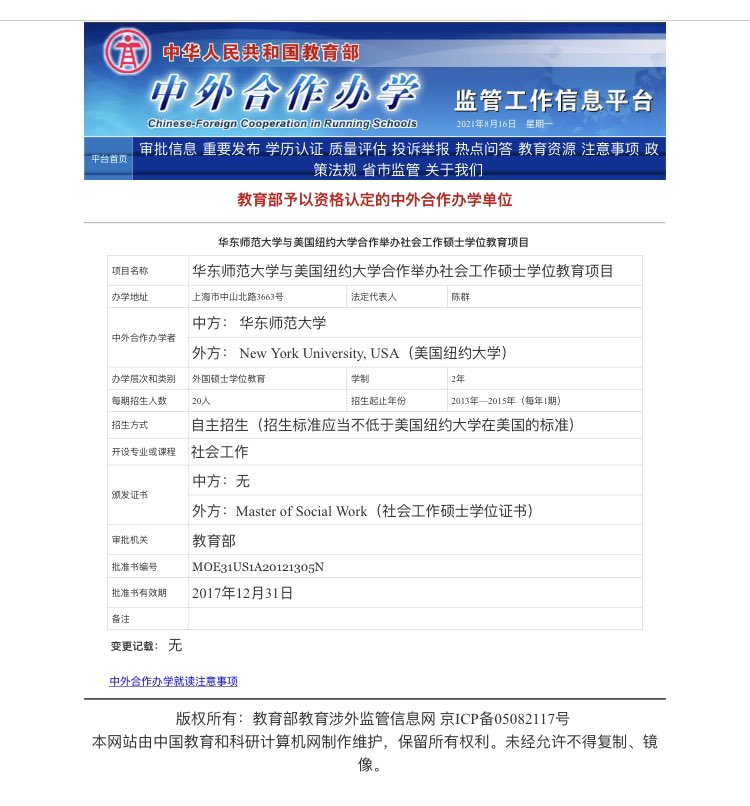 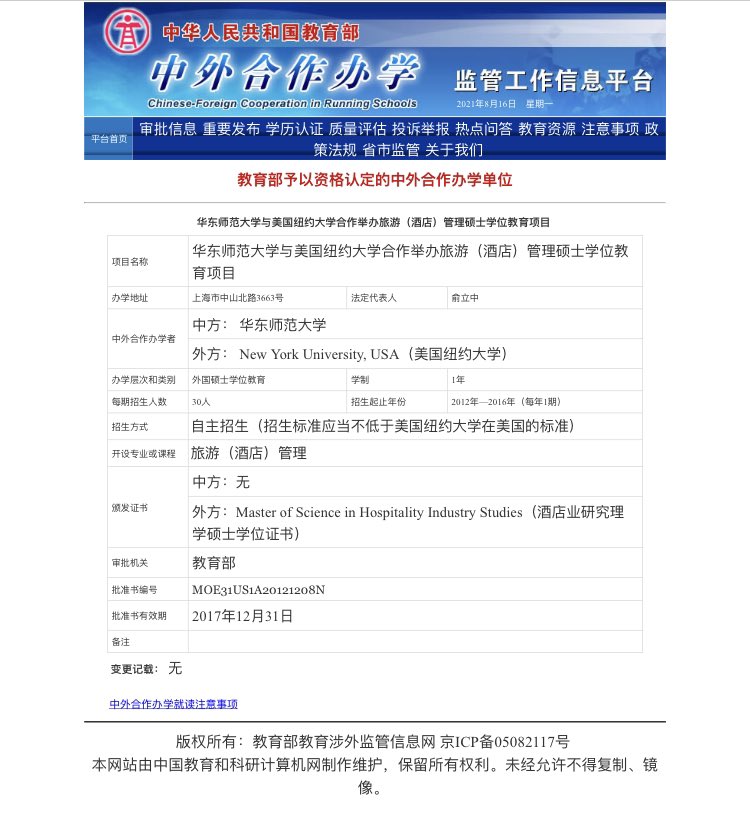 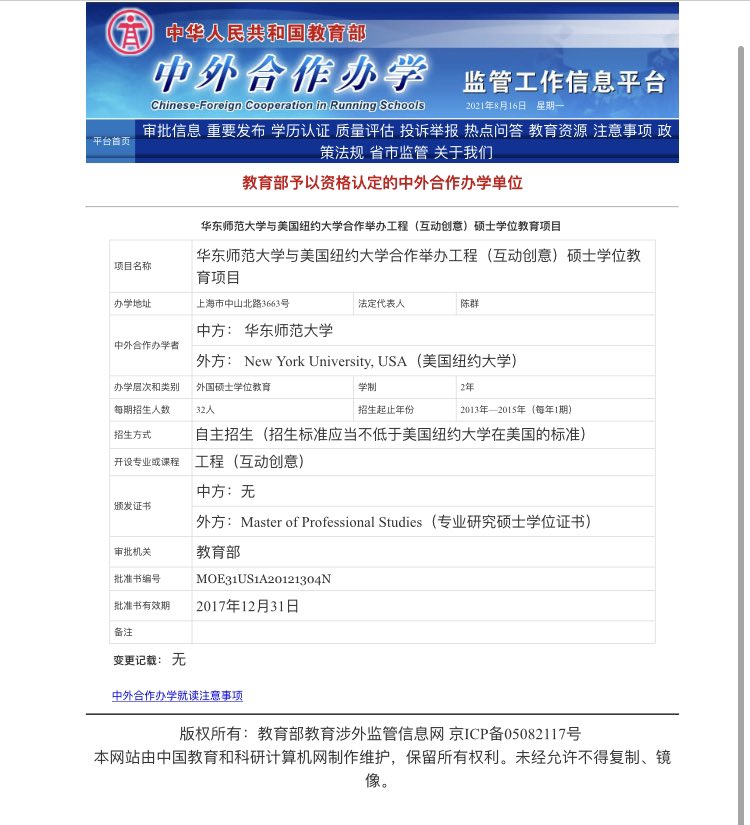 They were added to list in 2018, when 234 shuttered Sino-Foreign programmes were listed

The overwhelming majority of closures listed are programmes that were set up pre-2003, with many in Heilongjiang with Russian universities. Most - if not all - have either closed down due to never actively recruiting students, or have gone through an orderly closure process.

There is no indication that PRC MoE is targeting Sino-Foreign. This is already an extremely and strictly regulated sub-sector of China’s formal education sector.

However, a significant amount of foreign university activity in the PRC - especially in relation to student recruitment - exists outside the formal HE sector and is often very closely intertwined with the for-profit tutoring sector

This includes private tutoring firms provoking “study overseas” education consulting, and the for-profit spin-out companies of public sector universities which have recently been the target of regulation and transfer to private ownership.

So while this list is simply a record of all Sino-Foreign programmes which have lapsed/closed/mothballed - universities need to conduct risk assessments with their other recruitment and pathway channels.

Many of these pathway channels look like they are established with public sector universities. But many are not. They are actually for-profit private tutoring firms owned by public sector unis which carry the branding of those unis.

While foreign uni recruiters are under the impression they are recruiting students from reputable Chinese unis, those students are never enrolled at those PRC unis.

It’s a similar story with foundation and pathway partnership: they think they’re partnered with a uni, when in reality they’re not.

There are three flags for unis to check :

If fees charged to students for a foundation/pathway are very high (¥30k+) it’s a very bad sign.

But the major flag is entry requirements

If PRC students are recruited via the Gaokao system - then ok. But if entrance requirements stipulate “60% on the Gaokao or take our entrance examination” then run a mile.