1/ We went on a family trip last week. It was the first vacation we could carve out in a while (see also, Tishrei holidays on Tues/Wed this year) plus the need to relieve the cabin-fever of COVID. Foresight also suggested we should grab time now before the next wave.

2/ In the past we've been able to travel far, but staying close to home seemed prudent this year pandemic-wise. So we went to the Hudson River Valley. Just 2 hours away but it felt like a different world. Which was perfect. Important history there plus great natural beauty. 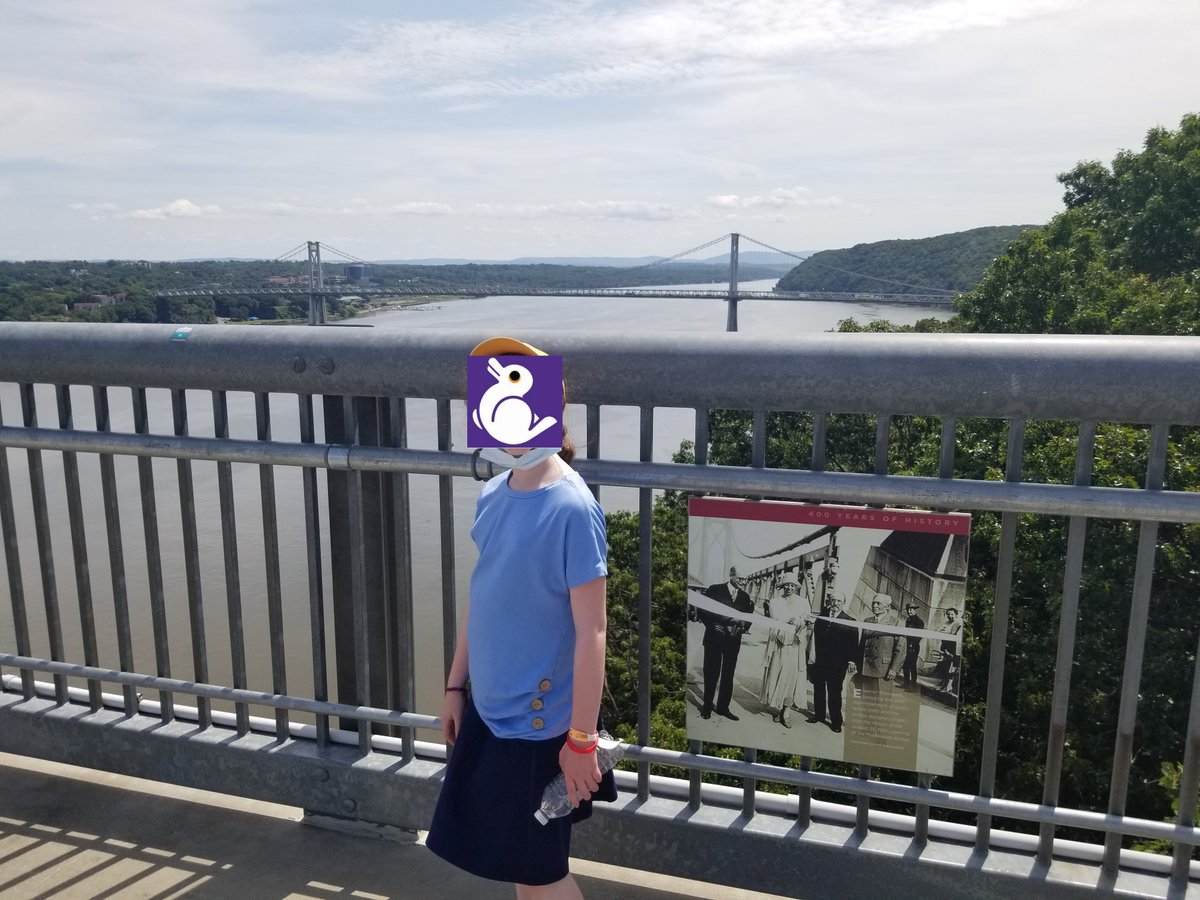 3/ The above pic is from the Walkway Over the Hudson, the 2nd longest pedestrian bridge in the world. And I believe it, because while traversing it in the climate-changed heat, I was firing spoons off like an overheated Gatling gun.
https://walkway.org/
https://en.wikipedia.org/wiki/Walkway_over_the_Hudson …

4/ There was a statue of Sojourner Truth at the bridge that was dedicated last year in commemoration of the 100th anniversary of the 20th Amendment. She had was held in bondage in that area and famously walked to freedom.
https://en.wikipedia.org/wiki/Sojourner_Truth#Freedom …
https://www.poughkeepsiejournal.com/story/news/local/2020/08/26/sojourner-truth-statue-unveiled-walkway-over-hudson-highland/3441872001/ … 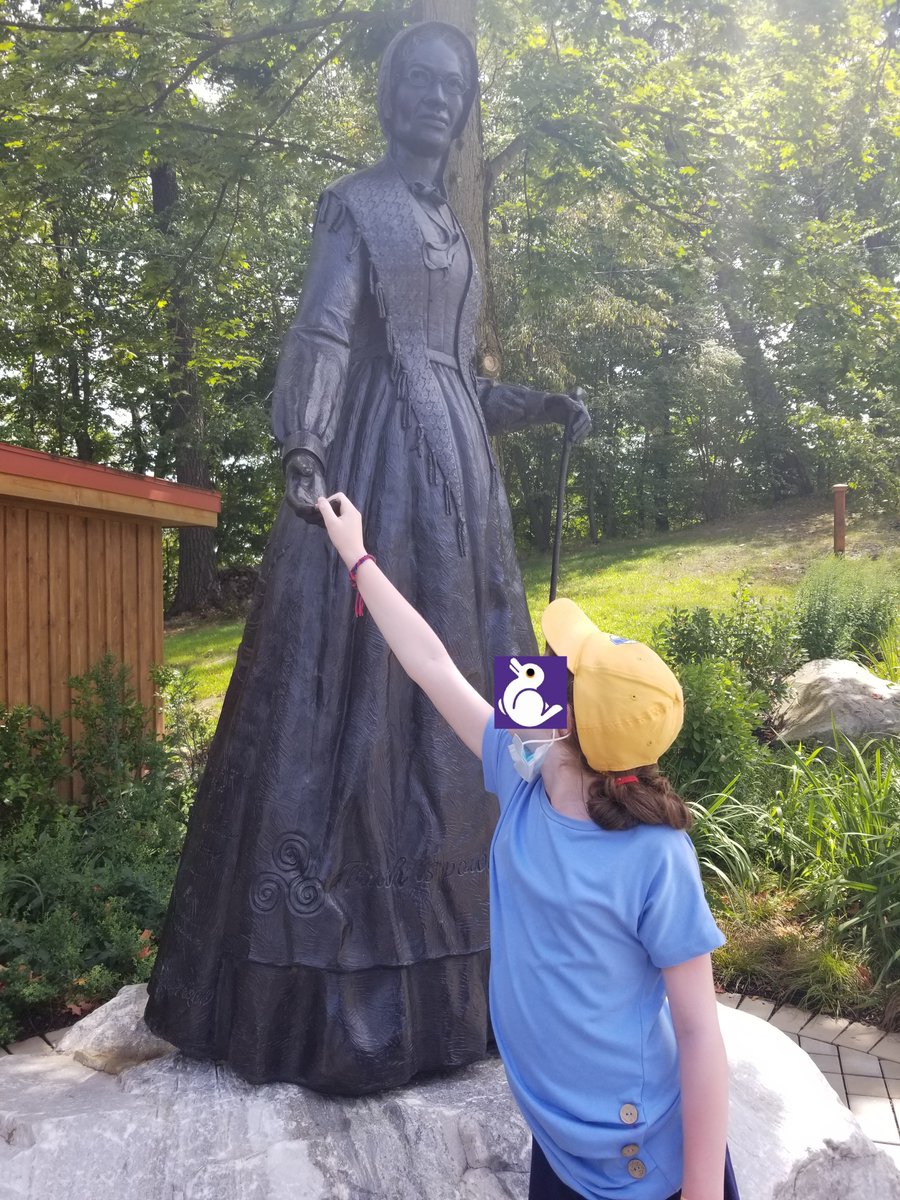 5/ Many places we wanted to visit were partially closed b/c of the pandemic, including much of the FDR & Eleanor Roosevelt homes in Hyde Park. We also took a substandard boat tour of the Hudson, a good tour of West Point and a great time at Bear Mountain.  https://en.wikipedia.org/wiki/Portal:Hudson_Valley …

6/ Later, I may write more but some quick points and two larger topics. First, on the way up, we encountered a shock: there's a Trump (ym'sh) state park! I'll let Krusty desribe my mood
https://www.youtube.com/watch?v=_B6dBjAgdrA …
See here:
https://maps.app.goo.gl/XfpkbztRGEQFB18m6 …
https://en.wikipedia.org/wiki/Donald_J._Trump_State_Park …

7/ Fortunately, the park was set up when he was a simple money-laundering civilian and not in honor of his criminal acts as POTUS. Thankfully, there have been increasing attempts to rename it.
https://en.wikipedia.org/wiki/Donald_J._Trump_State_Park#Proposals_to_rename …
For more:
https://www.atlasobscura.com/places/donald-j-trump-state-park …

8/ For reasons of humorous serendipity, near that immoral eyesore on the Taconic was a sign for LaGrange (NY). This prompted the ZZ Top enthusiasts in my vehicle to warble an acapella homage to the recently departed Dusty Hill.
https://en.wikipedia.org/wiki/LaGrange,_New_York …
https://youtu.be/Vppbdf-qtGU

9/ Like all experienced travelers, we played the License Plate game. We didn't expect much success but with special help from the West Point parking lot we did very well. I'd like to think the TX/FL etc plates were grateful political refugees.
https://en.wikipedia.org/wiki/Car_numberplate_game#In_North_America …

11/ Alaska and Idaho were great prizes - again, from West Point, which had recently completed Beast Barracks. Montana, Oklahoma, Oregon, and Kansas as well. Such a bounty.

The brain-mode of the game is hard to switch off, though. I still do it.
https://midhudsonnews.com/2021/08/10/beast-barracks-draws-to-close-with-march-to-west-point/ …

12/ Another game: we stayed in Fishkill, NY - which means Fish Creek in Dutch, but in English it means a fishy crime spree. We tried to find the funniest business name that innocently used the town name to make a sinister news headline like "Fish Kill 10"
https://en.wikipedia.org/wiki/Fishkill_(town),_New_York …

13/ We also play a version of Ghost called Goats (b/c it's funnier). It's like the regular game except that if you realize you're trapped you can invent a word to get out of trouble and if challenged you must craft a credible (albeit fictional) definition.
https://en.wikipedia.org/wiki/Ghost_(game) …

14/ This yielded, for example, BLEEVO which means "a walkway over a river" (see #3 above) and the highly functional word DRASTISH (dras-teesh) which means "a banana dish which is artfully arranged into a smiley face"
[Pictured: not Drastish, but what the heck]

15/ First larger topic: one of my Cypess' Razor life-rules: it's preferable to choose a maximized trade-off over a compromise.

Compromise means neither party is satisfied but not fully dissatisfied. Trade-off means each party gets a chance for their full preference.

16/ Trade-offs could entail taking turns as long as the activity isn't harmful, noxious, or loathsome to the other party. If so, then split up and do 2+ activities simultaneously.

For me, it's better to maximize happiness of some than insist nobody actually enjoy themselves.

17/ This rule only works if participants are able to handle a maximized shared activity and/or there's a way to have two maximized activities done simultaneously.

This is a rule I've tried to put into practice for years and I feel it's backed by solid ethics and practicality.

18/ Compromise is needed in some occasions, especially among contending quasi-adversaries. But if we care about the other people, then each party deserves to enjoy their special interests so a trade-off, each getting their favorite in turns, is the way to go.

19/ This rule is a corollary of one I invented decades ago based on how to meet up with someone. I felt one of the two people deserves to wait in a maximized location rather than both people meet in a third, compromised, location.

20/ E.g., on the first (blind) date I had with my (now) wife, I said I'd pick her up outside her apartment rather than meet at a restaurant. Why? Because (a) logistics of a third location are always messy & (b) if I was late, she'd have the safety/comfort of her home to wait in.

21/ That was a "maximizing trade-off" rather than a compromise.

So on a family trip, rather than find activities that we'd all kinda enjoy, do things that fulfil one or the others' full interests. As long as the uninterested can actually endure it.

22/ If it would be unendurable, then - if possible - split up & have simultaneous maximized activities. Which we did, for example, on our last day. One group wanted to clamber up a trail to climb Bear Mountain. Alas, this would've drained every spoon I had
https://parks.ny.gov/parks/bearmountain/ …

23/ So I researched and found that nearby was a Library Book Store! So while the mountaineers spent hours in the sun amongst the wood and rocks, I led an expedition to a used book store and public library. Maximized fun for two separate groups.

24/ While I can claim expertise in many subjects, I may actually have world class knowledge in evaluating book stores. I have almost terminator like vision for the words "Used" "Thrift" and "Book" in store titles. And library book stores are the best.

25/ The selection depends on the host library (e.g. the NYPL book sales had great variety) but the prices are usually insanely low. The store we spelunked offered 50 cents for any softcover, 10 cents for kids books, etc. The selection was so-so but it was hard to not go nuts.

26/ This was where I encountered the second of my larger observations. The store was staffed by volunteers and they were overjoyed to see such young people interested in books (the other, sparse, patrons were retirement age). Moreover, I was in 'vacation spending mode.'

27/ Evidently, as told to me later in the afternoon, one of the volunteers asked my daughter if the man who brought her in (me) was her grandfather. This was a first for me. I actually look young for my calendar age (under 50) so I wondered what made me appear like a grandfather.

28/ My favorite hypothesis was that it had nothing to do with my appearance, but rather my attitude/demeanor towards my kids. I told them more than once that they could get any book they wanted (within reason of taste and limited by how much we could carry).

29/ It was a family vacation, one of the last we could take before I expect my kids to start leaving home on their own. I want these trips to be special, memorable, and reflect the openness and generosity of a harmonious home of people who enjoy each other's happiness.

30/ And I think that's was the basis of the woman's confusion about my identity. Basically, I was acting like a grandfather: I was indulging the grandkids, letting them get whatever they wanted. And that makes me happy. It validated my philosophy.

31/ OK, sure, it could also be that I look as ancient as I feel every day - I won't deny that I may be affected by denial or vanity - and/or a reflection of my worldly wisdom - which actually would indulge my vanity. But I think it's my original hypothesis.

32/ There are other interesting tidbits - we went to a drive-in movie, we dodged an army of geese and their accompanying goose doots (to paraphrase Dave Barry) - but maybe that will wait for another time.