62.02/ A custom on #YomKippur is to wear a kittel, an all white garment that has ambivalent symbolism: men wear one under their wedding canopy and they are also buried in it. I mentioned to a physician friend that it can also be seen as "Jewish scrubs."

62.03/ "But life is ironic" is just boss-level shade. I mean, I have my theological differences with the pontiff, but I can imagine we see eye-to-eye about anti-vaxxers.(h.t. @dick_nixon)

62.05/ Another reminder that many people you see in memes are real. I gave to the charity as well (Tishrei power) because internet fame usually is all downside, so I'll try to help it be a force for good.

62.06/ I'm seeing ppl have trouble with Yonah's "dag gadol" - literally "big fish" - be anything but a whale. If your suspension of disbelief breaks down over that, as opposed to every other wacky thing in the story, then you're missing the comedic point.
https://www.sefaria.org/Jonah.2.1?lang=bi&with=all&lang2=en …

62.08/ AK is an experienced hand with deciphering Tomlin's highly precise code and she's totally right here: the #Steelers may have lost because of multiple missing defensive pieces but we also can't get 1 yard when we need it. Ugh.

So now, that's the name.

62.10/ Normally, I've had poor #etrog luck but for whatever reason I got a really great crop of plump & yellow citrons this year. Four: One for each kid, one for me & my wife. #humblebrag #etrogbrag #PlumpAndJuicyCitrons #Sukkot 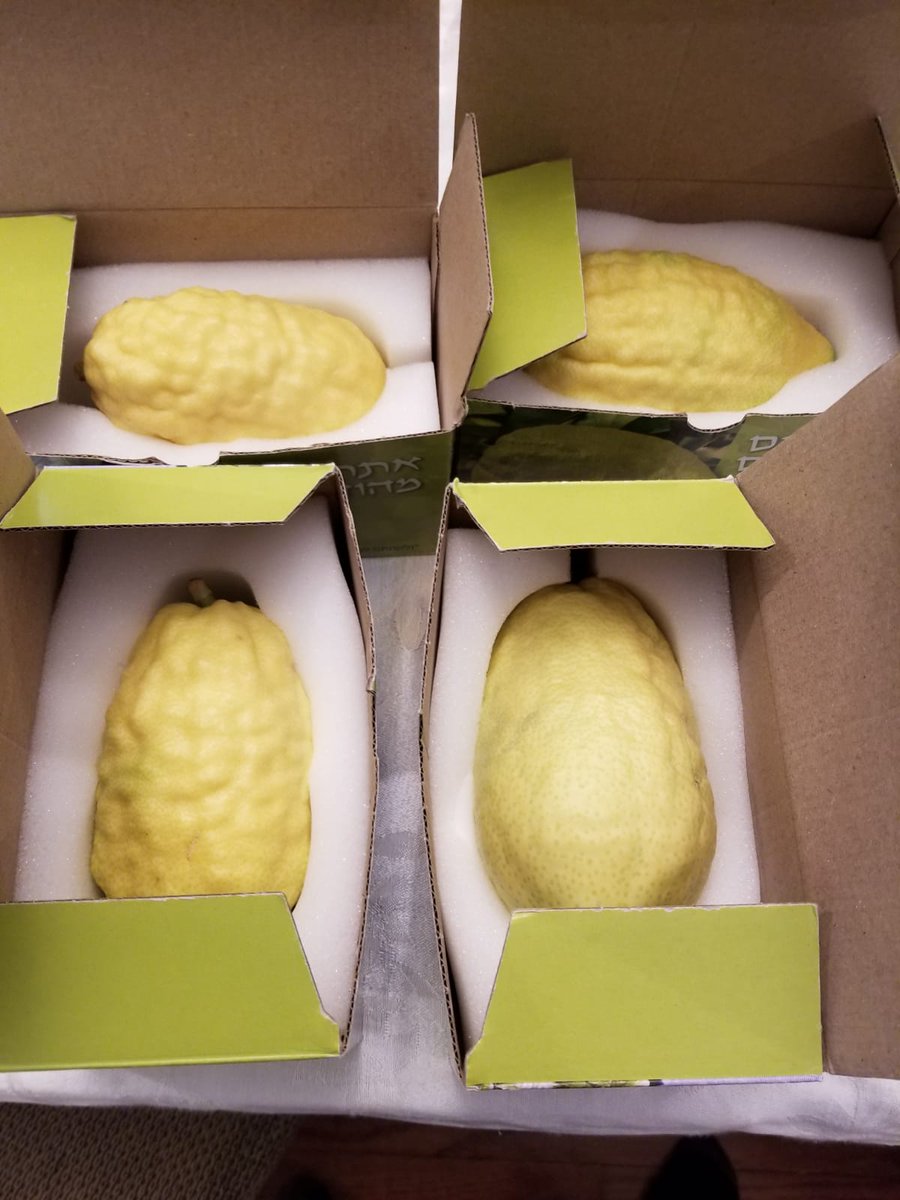 62.13/ Almost every #Steelers loss can be tied to our coaches' reliance on personnel over strategy/scheme, so when there are in-game injuries (esp. to All-Pros) doom is close by. Some in game reactions:

62.14/ My grammar skills are poor but my vocabulary game is sharp & has carried me through decades of higher education. Yet, I recently saw "confute" & thought it was a typo for "refute." Nope, they're synonyms. Where once I was confused now I'm confuted.
https://www.wordhippo.com/what-is/the-meaning-of-the-word/confute.html …

62.15/ Did a Hirhurim raid before YK and came across a bunch of articles I missed, like this incredible one about J.R.R. Tolkien which has a great story about his schmooze-chavrusa with Cecil Roth when they were air-raid wardens together during WW2:
https://www.torahmusings.com/2014/12/tolkien-jews/ …

62.16/ There are numerous ethical issues I juggle in order to be a fan of the #NFL & #Steelers but - while two wrongs don't make a right - at least I refuse to use F*acebook because of their ridiculous level of destructive evil.

62.17/ These are fun, humorous descriptions of the Jewish holidays (I don't know if there's alt-text, sorry). The second one has taught me a new one: Seharane
https://archive.jewishagency.org/holidays-and-memorial-days/content/23863 …

62.18/ This is a very good essay - with equally good citations - about morality & Jewish law. (While I have extensive comments, I need to save that for an article. I will say that "din" and "halakhah" aren't synonymous.)

62.19a/ It was asked in another forum about the rope that was tied to the leg of the Kohen Gadol (KG) to pull his corpse from the Holy of Holies if he died. Apparently it's an urban legend as per:  https://outorah.org/p/5694/

62.19b/ But the Talmud does state that in the Second Temple era the KG had to be replaced every year because wealthy, corrupt pretenders purchased the office and God killed them:
https://www.sefaria.org/Yoma.8b.7?ven=William_Davidson_Edition_-_English&lang=bi&with=all&lang2=en …
Cause of death? Being kicked in the face by an angel:
https://www.sefaria.org/Yoma.19b.5?ven=William_Davidson_Edition_-_English&lang=bi …

62.20/ This is part of a give & take that leads to an epic thread/rant (below) by Arthur about the facile underpinnings of Social Darwinism (SD); i.e. by SD's own claims for 'fitness,' weak but social organisms crush the 'strong.'

62.21/ Not everyone toxic operates in 'bad faith' which requires a knowing desire to use a system's tools & values as a weapon to undermine the system's foundations.

Many more people are just stubborn & aggressively dense. (I muted CF many moons ago)

62.22/ We've put up the Nitl, uh I mean, Sukkah lights and next go the paper chains. Cooking up a storm and, please God, the weather will remain rainless and clear. #ChagSameach everybody, have a great #Sukkot

62.23/ The halakha in our house is to play Earth, Wind & Fire's "September" every day of the month as a sayyag for mitzvat zecher kaf-aleph to avoid this problem. Besides, because of the chag, observance is pushed to isru chag (today).

62.25/ We voted as a family and unanimously agree that L'David jumps the shark once we stop blowing the shofar for it.

BTW, here's an excellent article about the minhag:
https://jewishlink.news/features/45418-le-david-hashem-ori-the-origin-of-our-elul-recital-custom …

And I've been on this for a while

62.28/ (a) Eugenics is a red-flag for depraved evil - it calls for a passive or active elimination of a class of people.

(b) I've studied anti-vax for years & it's crucial to understand that it's inherently eugenicist: a core goal of anti-vax parents is to avoid/eliminate autism

62.29/ I'm starting to think that the "true" in "true crime" means the same thing as the "reality" in "reality television."

62.30/ A quick note of a larger piece I need to write: "laziness" does exist as a moral problem despite its ableist history. Dt. 29:18 describes what amounts to the "free rider" fallacy which IMO is what Tanakh derides as laziness.
https://plato.stanford.edu/entries/free-rider/ …
https://www.sefaria.org/Deuteronomy.29.18?lang=bi&with=all&lang2=en …

62.31/ #Literalist thinking - which expresses itself in solipsism, egoism, and a total devotion to Dunning-Kruger - kills.

62.32/ A combo of life experience & learning the halakha well (what level of "dry" = passul) taught me this lesson years ago.

I think people fight vainly to keep them dry for the same mystical goofiness as being anti-microscopic crumbs on Pesach.

62.33/ In the spirit of "dan l'kaf zechut" I must assume that Mount Sinai is just being very makpid on sleeping in the #sukkah.

It reminds me of something I learned from my mentor, Prof. Peter Brown, about how to learn history from legal codes: when a law bans an act it doesn't mean it used to be acceptable, possibly it formerly was unfathomable or obvious.

62.36/ Brilliant! Not just in itself, but because of the deeper way of understanding a well-crafted narrative. If the heroes go through a portal, the other end should logically treat them as mind-blowing threats

62.37/ The data is stunningly obvious. But it's not about facts.

"Doing my own research" is part of the same code as "law and order." It's a racist, authoritarian, and aggressively selfish; e.g. "no CRT in schools" is code for "I'm so racist I spew bile"

Alt-text: "Johnny Depp says 'no one safe' from cancel culture as he accepts lifetime achievement award."

Depp has left a trail of intimate partner abuse, among other actions. He's upset he's being held accountable.

62.39/ Re: Dark & gritty superhero stories, specifically a murderous Superman. I totally agree that these stories are not just uninteresting but "evil hero" is a "villain." Misanthropic fiction can miss me #ThankYouVeryMuch.