63.02a/ Cataloging: there are 9 days in this 5782 #Sukkot holiday cluster. 5 are Yom Tov or Shabbat, 2 are the days before. That leaves 2 actual full days to get anything done, Thursday and Sunday. Two day yuntifs are hard! By #SimchatTorah, I'm as spiritually dry as my aravot. 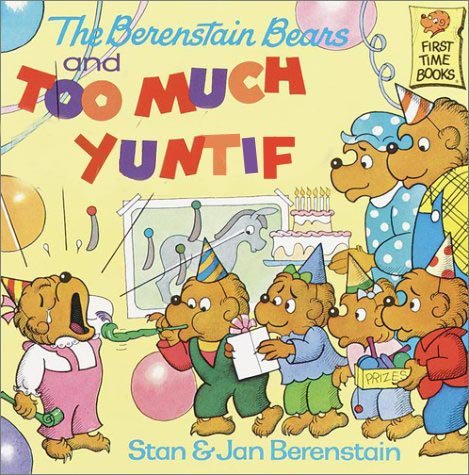 63.02b/ That great parody cover of The Berenstain Bears and "Too Much Yuntif" was evidently made by Rafi Skier as per this link below.

63.03/ The contrapositive of the aptly-named "Boar's Head" delicatessen meats - which has a brand name that warns the consumer that it's as treife as can be - is "Turkey Hill" ice cream which just messes me up.

In my mind? His response: "Following the what now?"

If we're both right, though, it'd be: "You fools! Esoteric knowledge is dangerous! I hope you didn't act on it!"

63.05/ While you might think that in (my proposed) "Muppets Do Mishna" Shammai should be Oscar the Grouch, it's far more uncannily accurate to portray Hillel & Shammai as Ernie & Bert.

[BTW, I always thought E&B were brothers because they perfectly matched me & @acypess]

63.06/ I recall being shouted down in class (early 90s) for suggesting that we can label certain cultures are suicidal and that those groups & individuals will prefer destruction over change. Here's more proof: these rubes prefer death over being "wrong."
https://www.washingtonpost.com/nation/2021/09/24/michigan-doctor-plea-unvaccinated/ …

63.07/ After RH/YK, my most necessary machzor is the (Artscroll) #Sukkot, but it still feels like a labyrinthine "Choose Your Own Adventure" game. If they wanted to merge Pesach & Shavuot and divide up Sukkot into 2+ books, that'd be fine by me.
https://en.wikipedia.org/wiki/Choose_Your_Own_Adventure …

63.08/ I'm embarrassed that I liked Gladwell back in the day. In my defense, it was before my PhD. His sources were good! But he sullies them.

I'm teaching my kids to be wary of The Answers Guy genre. Same mechanisms of cults/mysticism. Same shallowness.

63.09/ Today is #HoshanaRabba and while most of the liturgy has been sphacelated by mystical hoo-ha the oddest part - smacking a bundle of willows on the floor - is actually in the Gemara! See Rabbi Dr. Meir below:
https://www.ou.org/holidays/beating_the_aravot/ …
(and me in 2020)

63.10/ The #Mets were eliminated over Shabbas as part of their free-fall in the second half of the season. As I said back in 2019, this is not surprising in the least and yet it also doesn't remove the pain in the least.

63.11/ I DJ music as part of our kitchen table atmosphere (see below) & during #Sukkot I've added every "shake" song in my main list (#lulav humor). 90% are about dancing: "shake your [synonym for the posterior]" (booty, tail feather, groove thing, etc).

63.12/ BE"H I'll write up the shiurim I gave over chag - specifically on Hadassim and Kohelet. Two sources that actually complicated and thus changed my views below.

He was a giant in Torah, peerless in integrating Torah & science, and a tireless fighter in the arena of medical halakha.
https://www.timesofisrael.com/rabbi-moshe-tendler-who-shaped-orthodox-views-on-organ-donation-dies-at-95/ …

63.13b/ Rav Tendler was a gadol ha-dor in medical halakha; he was a unique combination of a Rosh Yeshiva with a Ph.D. in biology, with the yichus as son-in-law of Rav Moshe Feinstein z'l.
https://en.wikipedia.org/wiki/Moshe_David_Tendler …
YU's announcement:

63.14/ We don't know what fruit Adam & Eve ate in the garden but one suggestion in the Gemara is an #etrog. Can you imagine losing paradise and bringing death & pain and all for a massive bite out a bumpy lemon?!
See:  https://www.sefaria.org/Sukkah.35a.1?lang=bi&with=all&lang2=en …
Good article:  https://jewishaction.com/religion/jewish-law/whats-truth-apple-garden-eden/ …

63.15/ Very instructive and useful thread at the waning of #DeafAwarenessMonth

63.16/ I see from @joshtpm & @nycsouthpaw (below) that major news orgs are distorting the framing about Congress/Biden. Time & again the distortion helps the bad faith, fascistic, GOP. It's too consistent & well crafted to be incompetence. It's malice.

63.17/ Methodologically this story is where news meets epidemiology in that this is a "man bites dog" applied to "hoofbeats turn out to be zebras."

I didn't say shechiyanu, but now I regret that. It's kind of what the bracha is invented for: a milestone in a year or in one's life.

63.19/ This picture is a Proustian trigger for my childhood. So much nostalgia - and imagination - galvanized by these names and faces.

63.20/ Yet another thing the US is hoarding while the rest of the world is left behind. #99ProblemsAndAClownAintOne.

I'm going to start giving some select people one-way tickets and a map. It'll be a win-win!

63.21/ For #Bereshit, this is a link for a downloadable PDF of Rav Soloveitchik's seminal article/book "Lonely Man of Faith" (about the two creation narratives and their ideological/ontological ramifications)

63.22/ This is a really powerful thread about the lived experience of anxiety/depression and how they worked through the lies that those inner-mind conditions can/will tell them.

It matches my own observations as a (barely-trained) pastoral counselor.

63.23/ Now I know what next art project I will do with my kids next rainy afternoon (I wonder if I can use Legos instead of clay). Golems are covered by the 2nd Amendment (but possibly not the 3rd) #GolemGoals

63.24/ Yes, my sukkah is still up. The amount of work that crumbled down on me after the chagim ended was silly enormous. Unlike Pesach, it's painless to keep the sukkah up (maybe I'll invent a minhag to rationalize my torpor! 10th Ushpizin?)

63.25/ Anyway, I hope everyone survived Tishrei. Here's to a great new year filled with health & peace.

[And here's to no fast day for 3 months or issur melakha for 7! (#LeapYearForTheWin)] #ShabbatShalom!